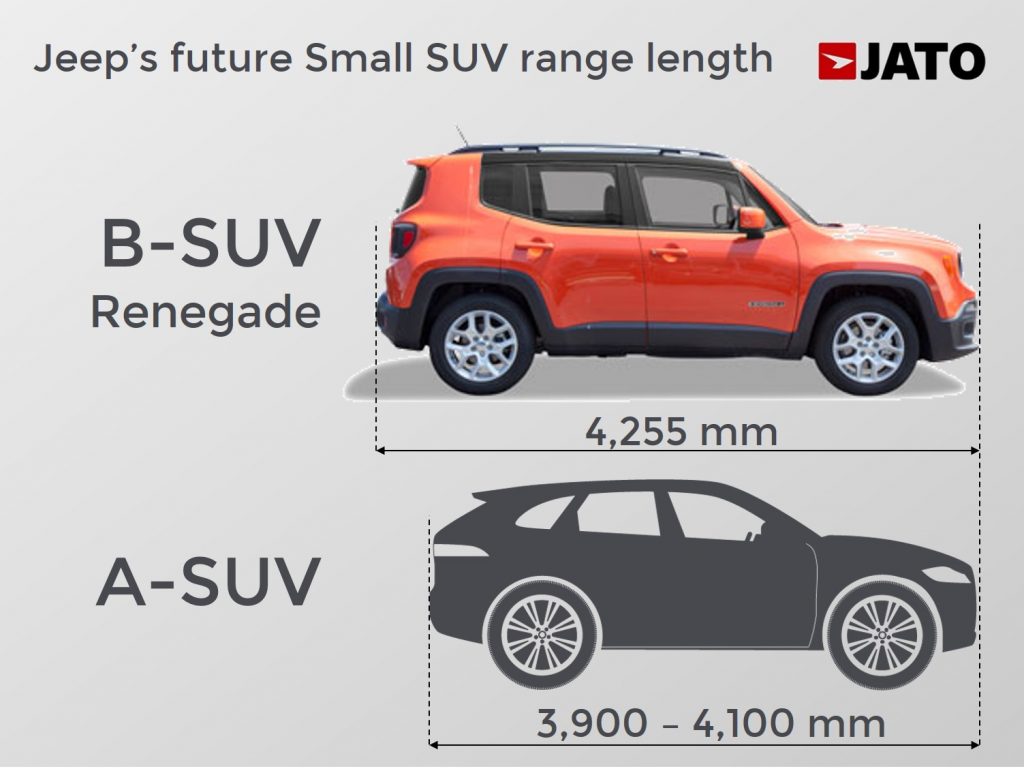 One of the more interesting announcements from Fiat Chrysler Automobiles’ (FCA) recent presentation of the Group’s 2018-2022 Business Plan was the launch of a small SUV from Jeep. The brand already has a small SUV in its range with the Renegade, but the presentation mentioned an A-SUV, or City-SUV, for the first time. In other words, FCA is preparing another Jeep model that will sit below the Renegade in terms of both price and dimensions. This marks the first official announcement about this new kind of SUV.

The global growth in SUV demand doesn’t show signs of deceleration. Sales have increased by 11% in the USA, 23% in Europe and 13% in China through April 2018. In India and Brazil their popularity has soared with volume up by 29% and 35% respectively. This growth seems to be a never-ending trend boosted by more models, more sub-segments, and better global economic conditions. 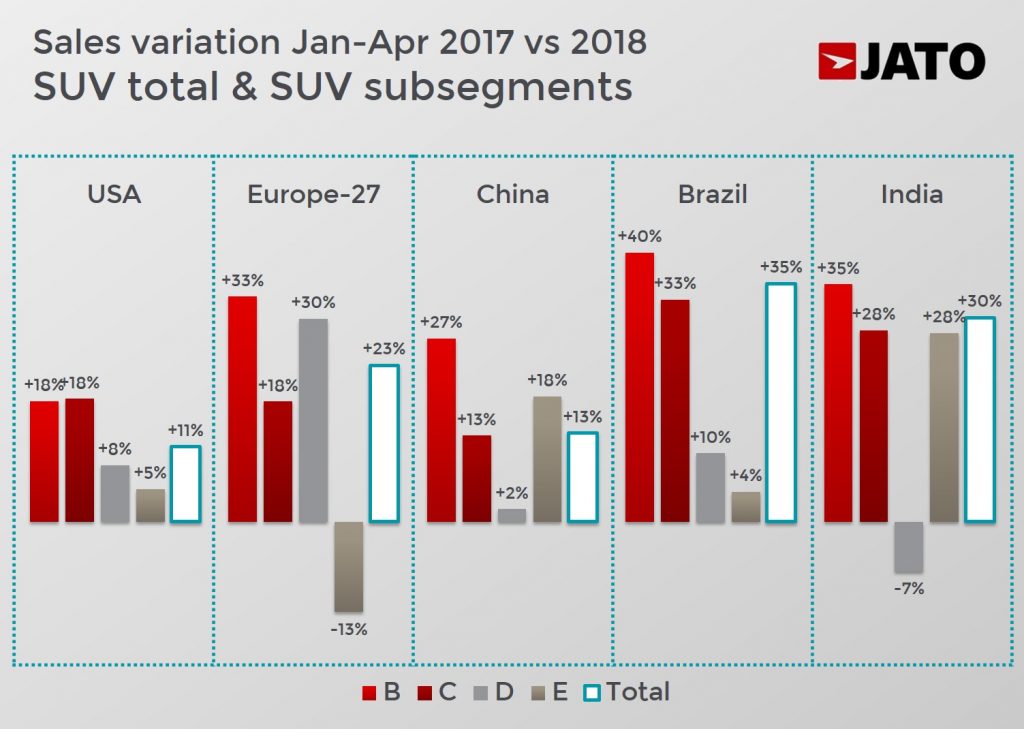 A big part of these encouraging results is due to the success of small SUVs, also known as B-SUVs. They are particularly popular in Europe, India and Brazil where they count for 37%, 75% and 69% of total SUV sales respectively. As these vehicles have become more affordable, the shift from traditional cars to SUVs has been easier for many consumers.

However, the B-SUVs are expected to grow in dimensions with the arrival of second generation models. The idea is to create more room for the impending A-SUVs which are expected to play in the 3,900 – 4,100 mm length range. The average length of the current B-SUV offer in Europe is 4,192 mm, but this is expected to grow in the coming years to between 4,250 and 4,300 mm. 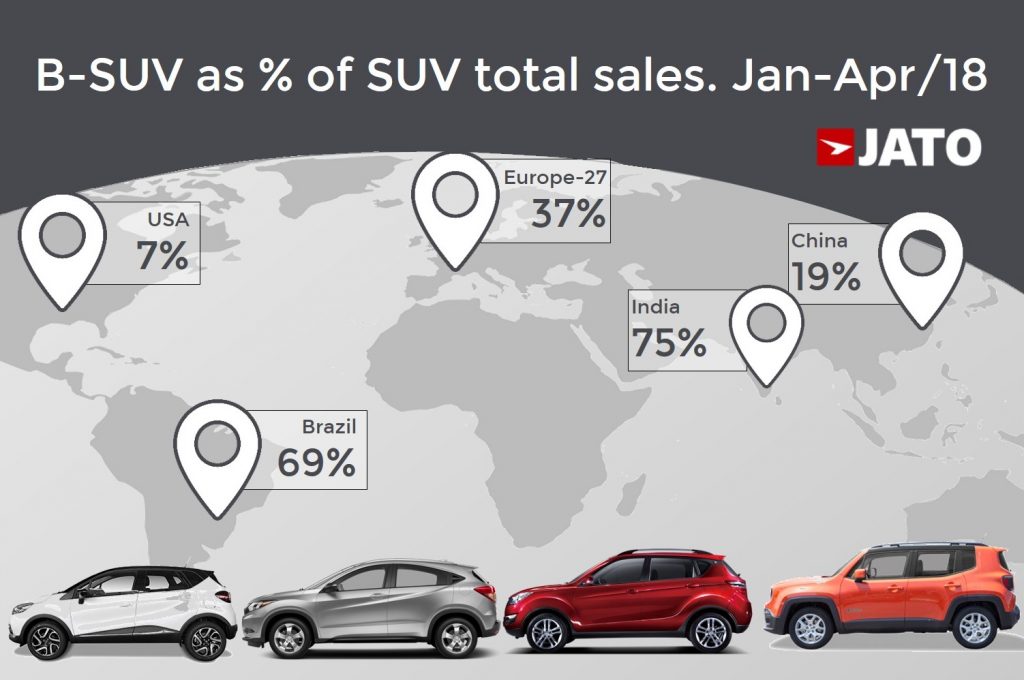 After the arrival of Super-SUVs, the City-SUVs are set to become the next growth area for the already over-saturated SUV segment. Renault has announced a second small SUV that could sit below the second generation Captur, and Volkswagen is developing the T-Cross to maintain a strong pace of growth. Peugeot, Citroen and Ford could also surprise the market with their A-SUV offerings in the future.

What’s the potential of the A-SUVs? Besides Europe, where small vehicles are always welcome, the tiny SUVs would also appeal to many consumers in India, where the current legislation benefits vehicles under 4,000 m length. Some short versions of the B-SUVs, like the Vitara (known as Vitara Brezza) have already made an impact in the Indian market. The same can also be said for Brazil, where tiny cars are still very popular. 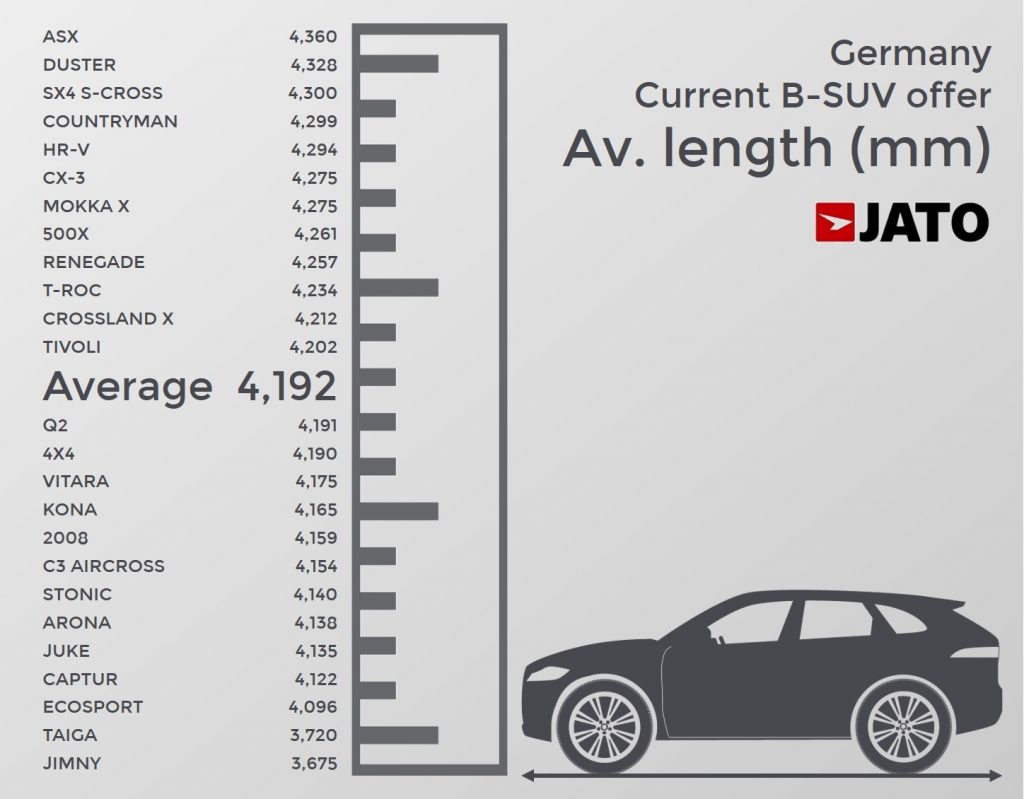 The future of a key SUV player like Jeep is partly depending on its new product offensive. Its first A-SUV will create another sub-segment that will not only boost its global sales, but will also continue to fuel up the rapid growth of SUV demand around the world.