2019 saw continued popularity for SUVs from American consumers, as the body style made up 49.5% of all new vehicle sales (8.5 million units) – an increase of 1.55 percentage points when compared to the previous year. The Toyota RAV4 was the best-selling SUV for the third straight year and was the fourth best-selling vehicle overall in the US market. The compact SUV sold 448,068 vehicles through the year, a 4.9% increase year-over-year. Following the RAV4 were the Honda CR-V, Chevrolet Equinox, and Nissan Rogue.

This increase primarily came at the expense of cars (e.g. sedans, coupes, convertibles), which declined from a 32.4% market share in 2018 to 29.4% in 2019. Despite declining 1.3% in year-over-year sales, the Toyota Camry was once again the best-selling car with 336,978 units sold. Rounding out the top five were the Honda Civic, Toyota Corolla, Honda Accord, and Nissan Altima.

In 2019, 49.5% of all new vehicle sales were either SUV or MPVs, an increase of 1.55 percentage points when compared to 2018. Donald Smith, Vice President Sales & Marketing at JATO, explained: “If this trend continues, 2020 will be the first year that SUV/MPVs make up a majority of new vehicle sales in the United States.”

Trucks continue to play a major part of the US market, selling over 3.6 million vehicles – an increase of over 200,000 vehicles when compared to the previous year. The F-Series continues to be the best-selling vehicle in the United States, selling 896,526 trucks in 2019. If the F-Series was a brand, it would be the seventh best-selling, positioned between Jeep and Subaru (937,255 and 700,117 sales respectively). Following the F-Series were the Ram Pickup and Chevrolet Silverado, with the Ram Pickup outselling the Silverado for the first time in their history.

Despite seeing a decline in sales year-over-year, Ford remains the US’ top brand, selling just under 2.3 million vehicles throughout the year. Their pole position can be attributed to the F-Series as other best-selling Ford vehicles (Escape, Explorer, and Fusion) have seen declining sales. Toyota and Chevrolet were second and third respectively, with Toyota selling more than 2 million vehicles for the 6th year straight. 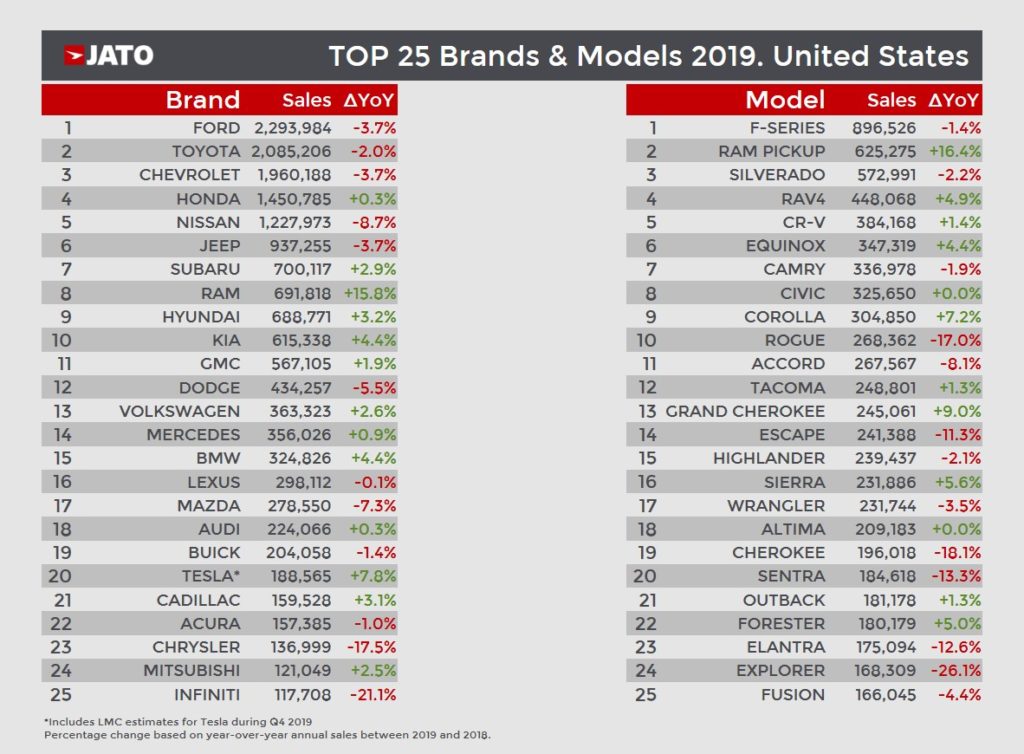 The biggest winner in market share growth was Ram who gained 0.60 percentage points year-over-year. Ram’s success can be attributed to the increased sales of the Ram Pickup, which was the US’ second best-selling vehicle in 2019 with 625,275 units sold.

The Tesla Model 3 was the best-selling premium vehicle for the second year in a row selling over 150,000 units in 2019. The Model 3 was the 26th best-selling vehicle in the United States for the year, positioned between the Ford Fusion and Mazda CX-5, and could crack the top 25 in 2020.