European registrations of B-SUVs increased by 16% in July, ahead of the launch of the Volkswagen T-Roc

The European car industry continued to grow in July 2017, with new registrations for the month totalling 1.19 million units, which was an increase of 2.6% on the same period last year. This represents the best July result since 2009, and the best result for the January – July period since 2008, indicating that 2017 is shaping up to match or even exceed the record result seen in 2007. However, despite this strong performance, growth is slowing. Uncertainty caused by Brexit for the UK market resulted in registrations for the country declining by 9.3% when compared to July 2016. In contrast, France contributed greatly to the positive overall performance of Europe, registering a 10.8% increase on the same period last year as a result of higher private purchases and strong increases from the country’s local car manufacturers. Notably, Poland also recorded an outstanding result, registering a significant 17.8% increase in growth, meaning that the country is now one of Europe’s six largest car markets due to increased purchases by institutional customers.

Significantly, in July, most new purchasers opted for small, compact and midsize SUVs. While most traditional passenger car segments posted declines during the month, SUVs increased their volume by 18.3% to more than 350,000 units, as a result they accounted for a record 29.4% share of the market. The market share of the B-SUV segment notably surpassed the 10% mark, with the volume up by 16% to almost 121,000 units in July and almost 1 million units for the year to date. This volume increase can be attributed to the new Toyota C-HR, Audi Q2, Opel/Vauxhall Crossland X and the new Mini Countryman. 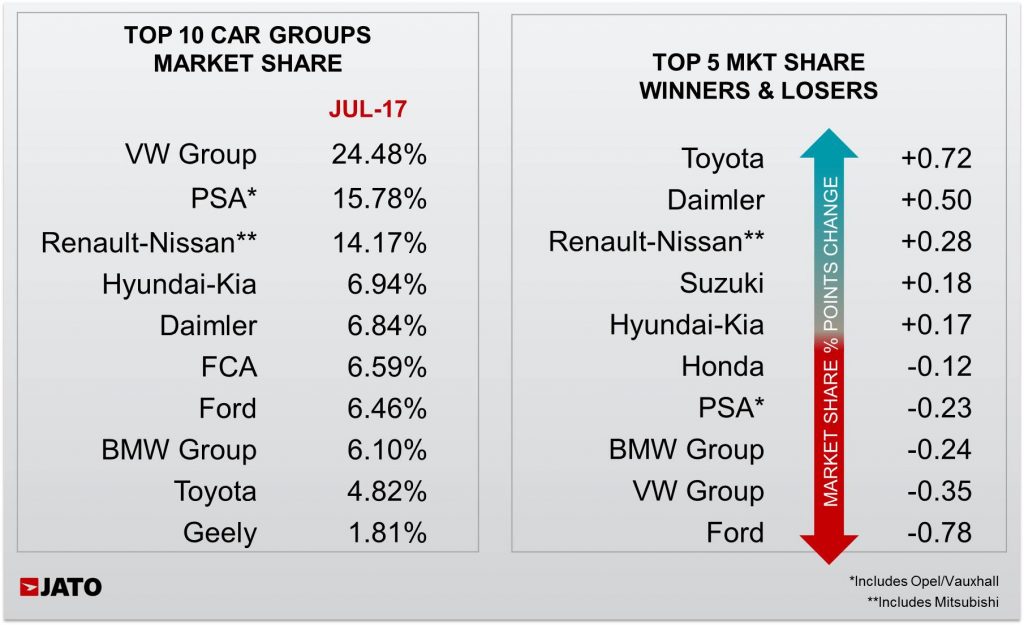 “In general, the market is performing well, but growth is slowing, in particular in the UK as the uncertainty around Brexit continues to bite. On a segment level, a shift is happening in the B-SUV market. As many of the current B-SUV vehicles available on the market age and are replaced, the segment’s traditional leaders such as the Peugeot 2008, Nissan Juke and Fiat 500X are posting lower increases or even declines. However, consumer demand still exists. This will have a positive impact on the newly launched Volkswagen T-Roc, which will hit the market just as many of its rivals such as the Nissan Juke and Dacia Duster are set to be replaced. Given the importance of the segment, it is hugely significant that Europe’s best-selling brand – Volkswagen – is entering the B-SUV market,” commented Felipe Munoz, Global Automotive Analyst at JATO Dynamics.

VW Group’s market share continued to fall – declining from 24.8% to 24.5%, however, its volume increased by 1.2%. This can be attributed to the strong performances of the Seat and Porsche brands. The Skoda Octavia impresses occupying the fourth position despite its age. The updated Yaris hits the top 10 outselling the Corsa and C3.   Best performers: Peugeot 3008 SUV, Toyota C-HR, Audi Q2, Citroen C3 and Peugeot 5008 SUV.