Car Registrations decreased by 0.5% across Europe’s Big 5 Markets in October

Elsewhere, Italy, Spain and the UK all posted modest growth. Italy grew by 9.7%, with rental registrations increasing by 44.6%, compared to the same time last year. Private registrations were the only negative performers in Italy during October, posting a decrease of 4%. The UK managed a small growth of 1.4% thanks to low interest rates, affordable finance packages and a wider variety of new models. Spain’s growth of 3.3% was modest compared to previous months, due to one less working day in the month, and the end of the PIVE plan (Efficient Vehicles Incentives Plan in Spanish) which affected private registrations.

“The small decline last month shows that the European car market is reaching its peak in terms of volume. It is noteworthy that despite the declines seen in the German and French markets last month, the European car market is still growing overall for the year to date. However, we expect to see only moderate growth in Europe’s Big 5 markets over the coming months as the market stabilises following a strong year so far,” said Felipe Munoz, Global Automotive Analyst at JATO Dynamics. 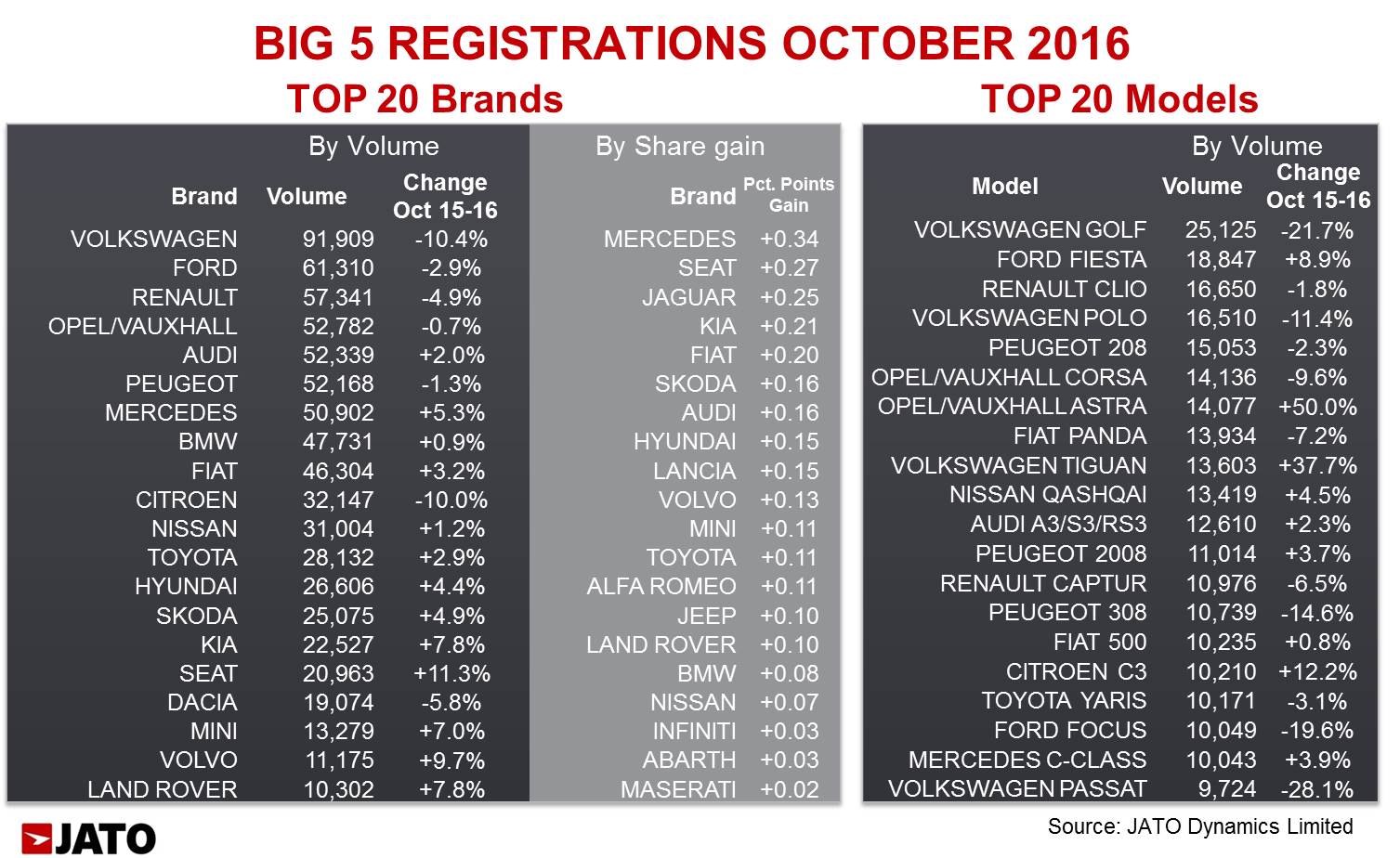 Volkswagen Group maintained its position as Europe’s largest car maker in October 2016, despite experiencing a drop in market share of 0.7 percentage points. While their compact cars posted a 12.3% decline, their SUV registrations increased by 26.6%. Keeping their second place position, the Renault-Nissan alliance also lost ground – with its market share decreasing by 0.4 percentage points. Their SUV registrations failed to maintain the growth seen in previous months (-0.4%), and their MPV range dropped by 34.2%.

The biggest drop among the top 10 best-selling groups was posted by PSA, whose sales dropped by 6%. This decline was driven by the performance of Citroen and DS Auto, who declined by 10% and 27.2% respectively. FCA gained 0.6 percentage points of market share and overtook Ford to become the 4th best-selling car group in Europe. BMW Group and Daimler posted growth of 2.1% and 4.5% respectively, their growth was tempered by a poor performance in Germany.

Compared to October 2015, SUVs and Vans were the only segments to grow their sales across the five markets – posting increases of 11.5% and 4.5% respectively. Conversely, the biggest market share losses were experienced by MPVs, city-cars and midsize sedans.

October registrations for the Volkswagen Golf dropped dramatically when compared to the same month last year, registering 25,125 units – a 21.7% decline. Despite this, it maintained its first-place position as Europe’s best-selling model. Meanwhile, the Golf’s rivals – Opel/Vauxhall Astra and Renault Megane – increased their sales by 50% and 35.8% respectively.

The Ford Fiesta led the subcompact segment, gaining market share as its registrations grew by 8.9%, while its rivals posted falls – Volkswagen Polo (-11.4%), Peugeot 208 (-2.3%) and Opel/Vauxhall Corsa (-9.6%). The Fiat Panda was the best-selling city-car of the month, while the Volkswagen Tiguan outsold the Nissan Qashqai and became the best-selling SUV. The biggest market share winner was the Fiat Tipo. It was followed by the Opel/Vauxhall Astra, Seat Ateca, Volkswagen Tiguan and BMW X1. By contrast, the biggest market share losers were the Volkswagen Golf, Volkswagen Passat, Renault Scenic, Volkskwagen Golf Sportsvan and Ford Ka.

“The Volkswagen Tiguan has helped the brand offset the drops posted by their traditional vehicles, with the model becoming the best-selling SUV across Europe’s Big 5 markets,” concluded Munoz.