Despite decreasing prices, EVs are more popular in the richest Chinese provinces

Despite the evidence of price decreases for EVs they continue to have more traction in regions where the GDP per capita is higher, and are more popular in the richest areas of China. This is the main conclusion of our new analysis of the Chinese car market by province.

Following our recent analysis of the American car market by state, in which the figures confirmed incentives have a direct effect on the demand of EVs, it’s now time to explore China. With 1.3 billion inhabitants spread over 22 provinces, five autonomous regions, four municipalities and two special administrative regions, our analysis includes 31 of these 33 territories.

Shanghai has the highest car penetration, with Guangdong ahead of Brazil

As expected, the municipality of Shanghai, China’s most populated city with 23 million people, was also the territory with the highest new car penetration. In Q1 2019 a total of 148,200 passenger cars were sold, or 6.4 new cars per 1000 inhabitants. However, even as the largest market among all the provinces in China, the result lags behind other countries.

Shanghai has the second highest GDP per capita in China, only behind Beijing, but in comparison to other countries its position is not so secure. The city was outperformed by 48 of the 51 states in the USA. Only three US states sold fewer new cars per 1000 inhabitants: Kansas (6.3), District of Columbia (5.4) and Alaska (3.8). This is another example of how far China is in terms of motorization. 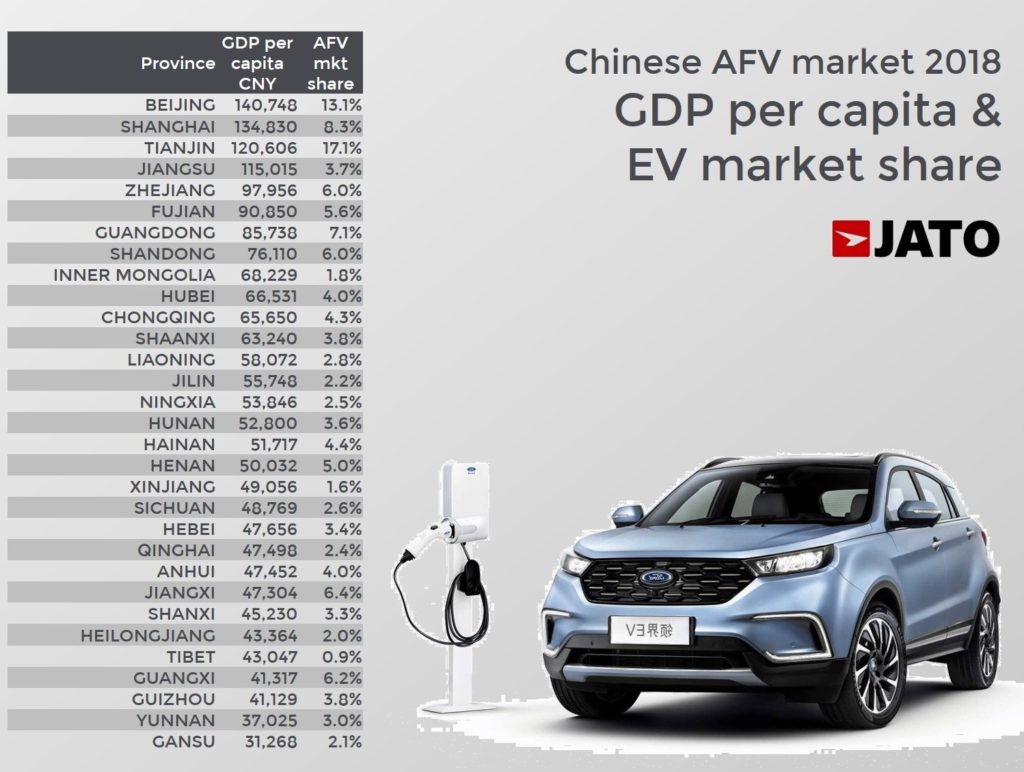 Volume wise, the province Guangdong ranked first with 533,400 passenger cars sold during the first three months of this year (-5%). Guangdong is China’s most populated province with 104.3 million inhabitants. As a matter of comparison, China’s largest regional market was bigger than the whole Brazilian market (Cars and LCV) but smaller than the top 4 largest markets in Europe: Germany (880,000 units), the UK (701,000), France (549,200) and Italy (538,900).

China is rapidly becoming a key contender in the EV global market. Unlike in the ICE world where Western brands take the lead, the EV market is a race of equals between China and the rest of the world. Moreover, by gaining a competitive advantage in terms of electrification, China is winning its ticket to global markets. And it has an advantage: its giant local market and the government’s commitment.

Growth has been possible thanks in part to affordable and small electric cars. In contrast to trends in Europe and the USA, where most AFVs are quite expensive, China has been working on developing cheap electric cars for the masses. The average retail price of EVs sold in China in 2018 was 37% lower than their European counterparts. 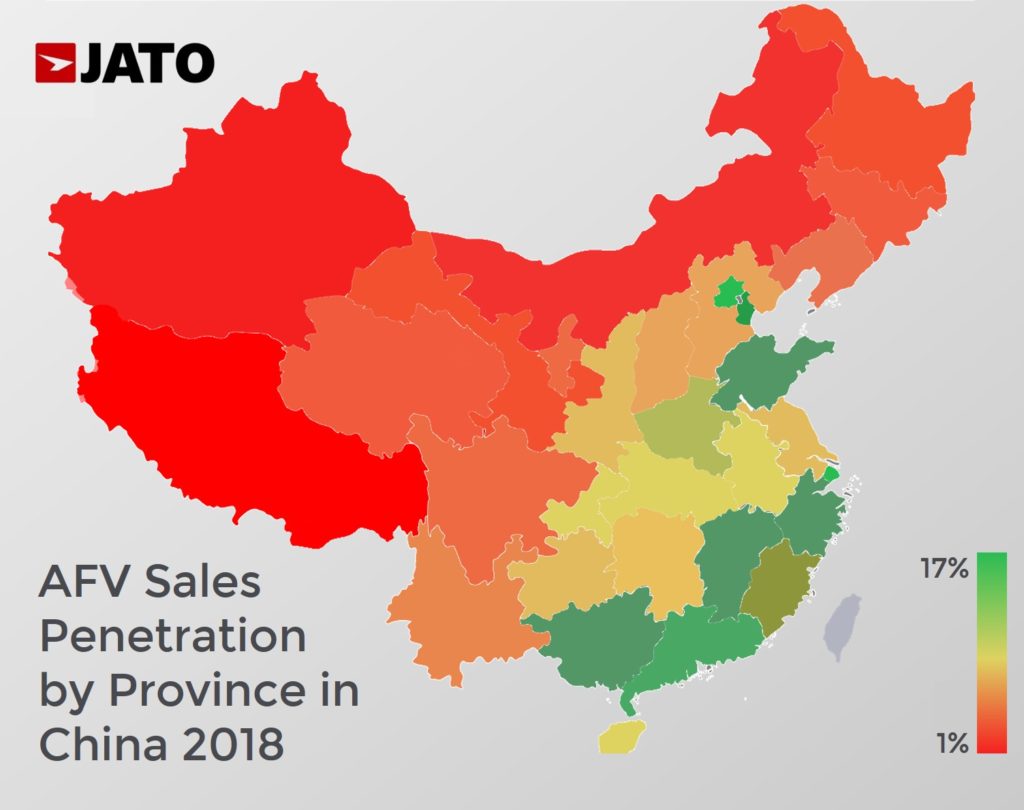 However, they are still expensive for most of the population. Based on our insights, these cars (BEV, HEV and PHEV) find more customers in the richest provinces. The highest EV penetration in 2018 occurred in the municipality of Tianjin, where 17% of total car sales were powered by an electric or hybrid engine. Tianjin is the third richest region in China with GDP per capita of 15,600 euro/year. The EVs popularity is also evident in the other two richest cities, Beijing and Shanghai, where they controlled 13% and 8.3% of sales respectively. 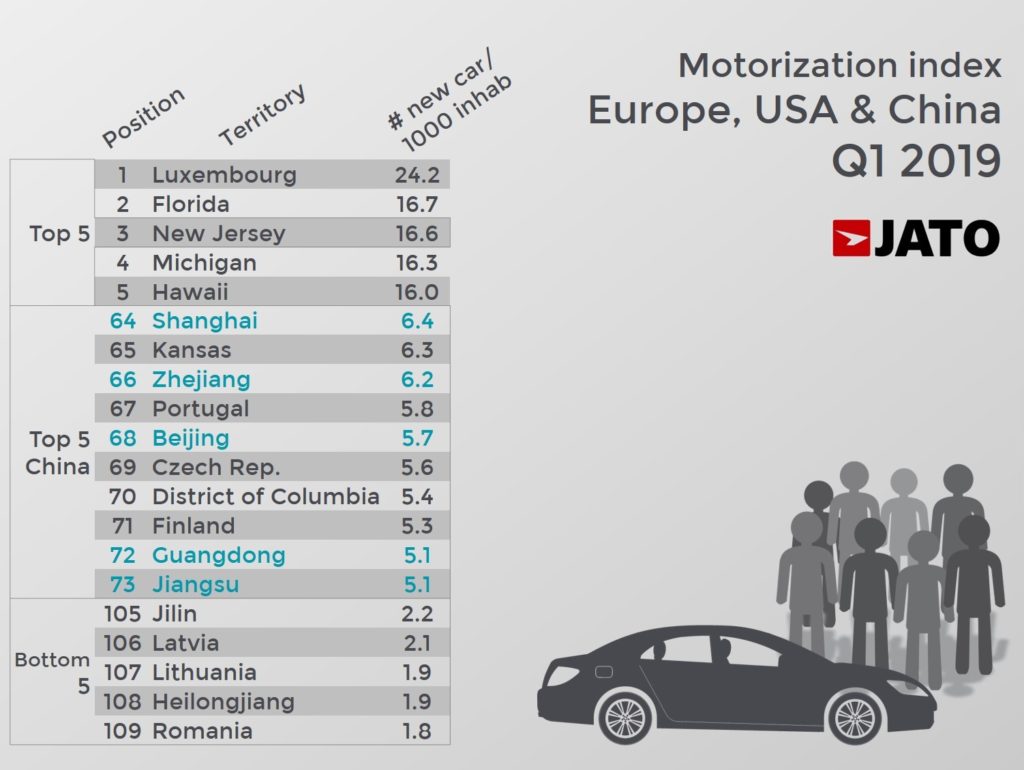 In contrast, it’s hard to find EVs on the roads of territories with the lowest GDP per capita. Gansu province, in the North Central part of the country, has a GDP per capita of only 4,000 euros, and 2.1% of its new cars use alternative fuels (although the market share is still greater than in some European countries like the Czech Republic, and is at the same level as Croatia). The autonomous regions of Tibet, Xinjiang and Inner Mongolia posted the lowest EV penetration, and their GDP was between 5,500 and 8,800 euros.

Still more work to do

These results indicate that despite their efforts, the industry still needs to address one of the main limitations of EV growth – their prices. The demand is still price sensitive, even in China, where the cars are less expensive and the government is pushing the purchases through incentives and tax cuts. Europeans and Americans should pay attention if they want to really electrify the industry and continue selling cars.