Despite the facts, there is a future for the MPV

MPVs have a future despite the fact that their demand is shrinking in many key markets. As consumers around the world continue to shift to SUVs, with their demand reaching a record in 2018, traditional cars are facing an increasingly complicated future. With sedans losing ground in the USA, and the market share of hatchbacks continuing to fall in Europe, the common loser in both markets is the MPV.

European registrations have halved in the last 10 years

The latest figures paint an alarming picture for MPVs. In 2009, their registrations totaled 1.8 million units in Europe, which counted for one in eight passenger cars sold. Ten years on, this has fallen to 892,000 units, or 5.7% of the market’s total. This equates to the biggest drop among all segments. 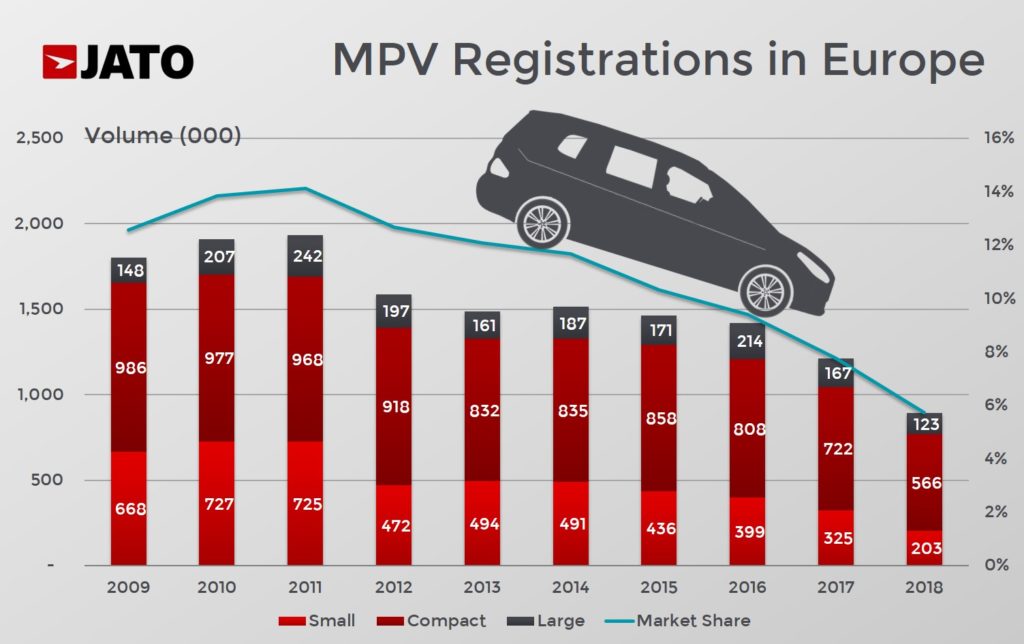 This is mainly due to the SUV boom, which took-off after the introduction of the first-generation Nissan Qashqai back in 2007. Some benefits of the MPVs, like the interior space and comfort, were quickly replaced by SUVs. Moreover, SUVs are as comfortable as MPVs but in a more appealing package. Registrations in Q1-19 indicate that the volume of SUVs was almost 8 times higher than MPVs. But looking back to 2009, there were 1.5 more MPVs registered than SUVs.

It’s not only due to SUVs

There is also another segment taking sales away from MPVs. The LCV-derived vans are the closest vehicles to MPVs in terms of versatility and interior space. They are the passenger transport versions of light commercial vehicles, targeting families and those who need cargo room but also seats. The vans can be divided in four groups: small, compact, midsize and large. 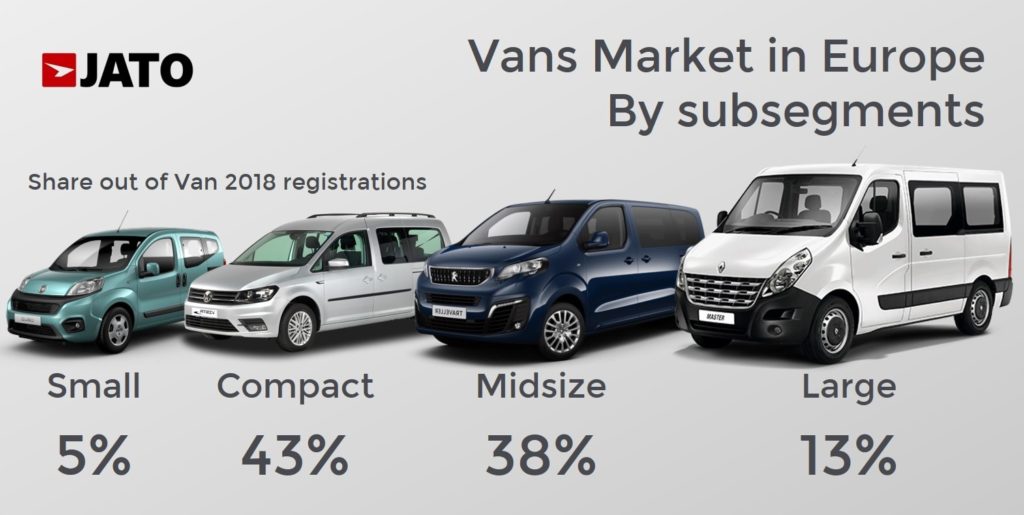 Last year, their registrations totaled almost 500,000 units in Europe. The total was slightly lower than the 2017 volume but is still the second highest volume of the last 10 years. More importantly, their demand grew by 19% between 2009 and 2018, mostly driven by the midsize vans (for example, the VW Multivan, Ford Tourneo Custom, Mercedes Vito, amongst others). 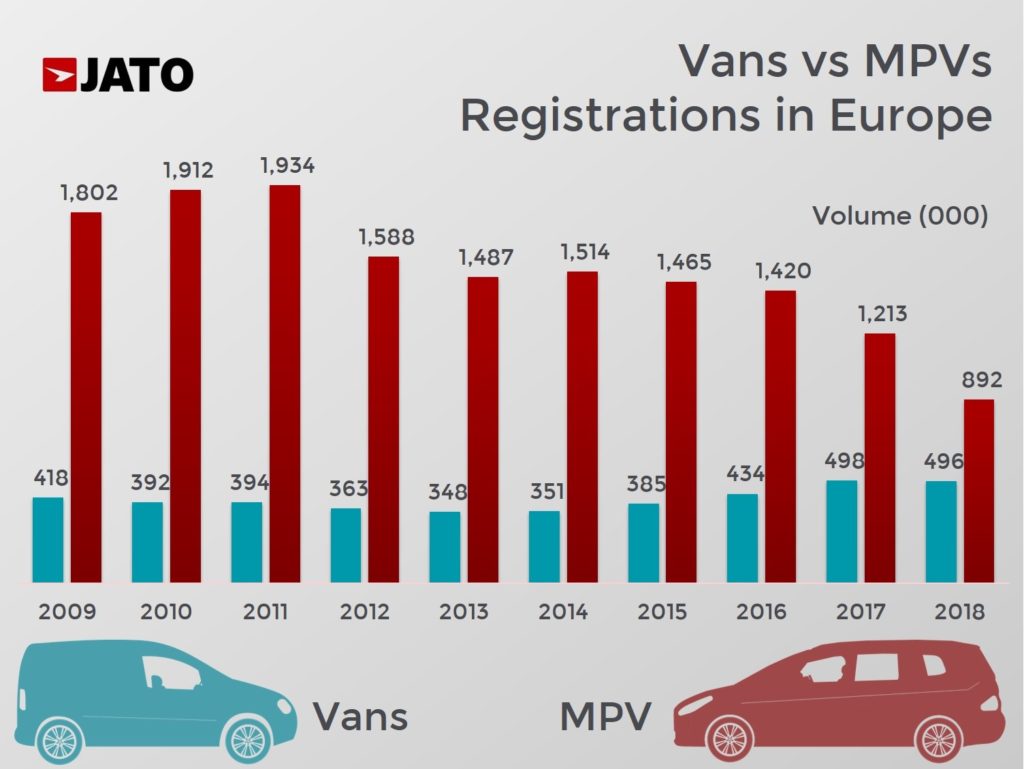 The major impact of vans on the demand for MPVs has been in the midsize segment. These vans are usually bigger, cheaper and more comfortable than their midsize MPV counterparts. As a result, some consumers looking for versatility and roominess who don’t find the solution in a midsize SUV opt for these vans and save money. In 2009, a total of 86,800 midsize vans were sold in Europe, against 147,800 midsize MPVs. Last year, there were 191,100 midsize vans against 123,400 midsize MPVs.

The future for MPVs

With sales dropping, and the development costs of MPVs rising, it is unlikely we’ll see new generations of the current models sold in Europe. Citroen has just announced it will stop producing the C4 Spacetourer. BMW did the same with the 2-Series Gran Tourer, and Ford is due to axe the C-Max soon. In the small MPV segment, Nissan, Opel, Ford, Citroen and Skoda discontinued their models in 2017-2018. Meanwhile it is unclear what the future holds for the Renault Espace, Seat Alhambra, and Ford S-Max. 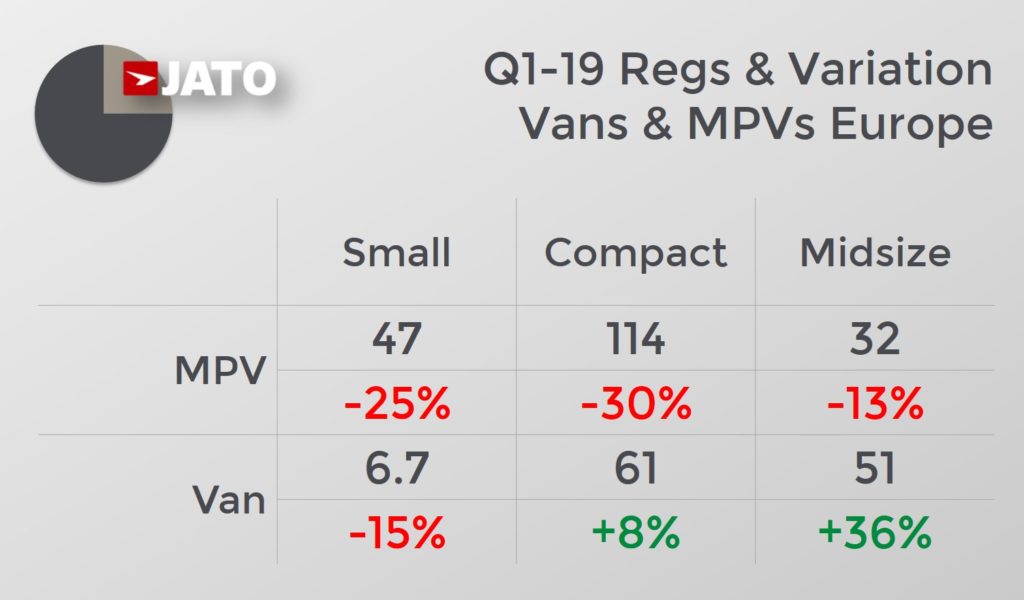 It is highly probable that the larger MPVs will be replaced by better equipped midsize vans. This can already be seen with Mercedes and the V-Class, which is no different from a Mercedes Marco Polo/Vito. The same scenario could happen in the small MPV segment, with models like the Ford Tourneo Courier replacing the B-Max, or the Opel Combo taking the place of the Meriva.

But despite what others may be saying, MPVs do have a future. While vans may be slowly taking their place with the same values of interior space and comfort, MPVs are a key segment for electrification. They are big enough but not as heavy as SUVs to be able to carry big batteries. This is why many of the electric concepts revealed in recent motor shows are MPVs: Seat el-Born, Mercedes EQV, Audi AI:ME, Volkswagen SMV. And the upcoming Volkswagen ID3, whose pre-orders started this week, features an MPV silhouette.