Europe is the new fortress for the world’s BEVs

The turbulence created by COVID-19 continues to have a major impact on the automotive industry. Global vehicle sales fell by 43% in April to just 4.1 million units, and volumes totalled 21.3 million units between January and April 2020, down by 28% from 2019. The top 10 of automotive markets has been impacted significantly, with three new countries climbing into the rankings – Mexico, South Korea and Australia.

One of the main changes was seen in Europe’s new leadership across the electric vehicles segment. Continuous product launches and strong incentive programmes across the continent, have helped to increase consumer confidence for electric vehicles. And, our data confirms this new reality – EVs are the new safe haven for the car manufacturers operating in Europe.

Q1 2020 saw disruption across the Chinese, European and US markets. With the pandemic originating in Wuhan and spreading across the region other countries were monitoring the situation closely, deciding how best to proceed.

Chinese demand for BEVs dropped by 55% to 81,800 units in Q1 2020, following the lockdown imposed. This is in contrast to 2019, when China was the biggest market for BEVs, with 694,000 units, and 51% of global volume. Meanwhile in Europe, the registrations for BEVs increased by 56% to 127,900 units in Q1 2020 and topped the world’s ranking by regions. This was the first time since the start of the electrification race that Europe has come out on top of China in these rankings. 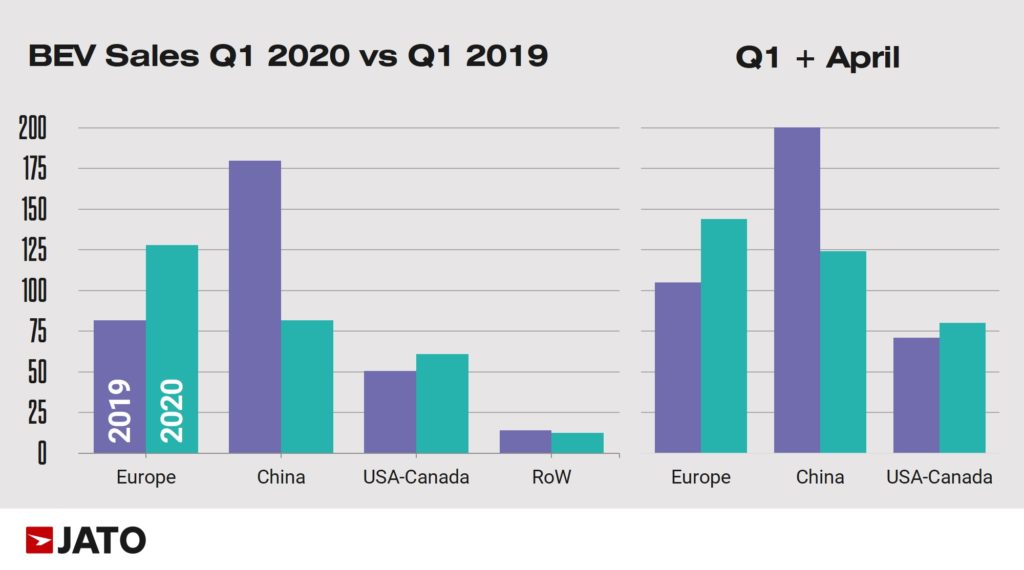 Europe’s ascension into the EV market came in large part due to lockdown in China meaning people were restricted and unable to buy cars. Alongside this, Europe now seems to be fully adopting the new technology. An array of incentives, a broader model offering and increased consciousness among the population regarding the benefits of the electric vehicles, have boosted sales as never seen before.

Sales were not the only positive for Europe across the automotive landscape. We also saw a high number of new car launches and consumers favouring electric vehicles, the majority produced locally, many of which were also exported and sold abroad. This is significant and indicates the strength of Europe’s manufacturing and production of electric cars that consumers find appealing. 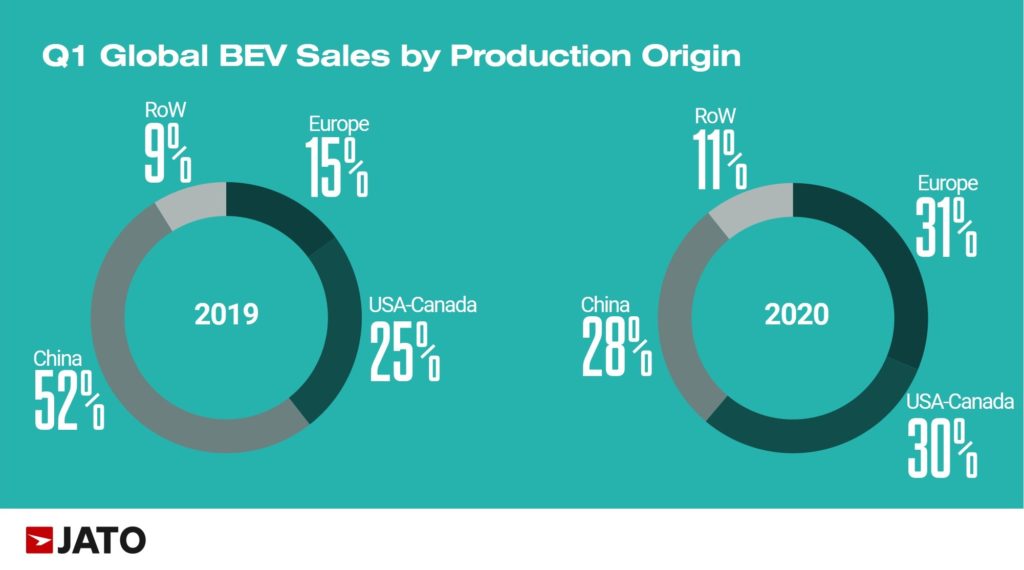 During the first three months of 2020, European electric cars made up 31% of global sales. In Q1 2019, their market share was just below 15%. European manufacturing of EVs raced ahead of the USA and China, due to domestic demand, which jumped by 81%. Nonetheless, USA-Canada, increased their volume by (+72%) and China saw an increase of (+83%). Germany’s production of premium BEVs, is a large factor contributing to Europe’s success in the field.

However, US electric cars, many of which belong to Tesla, have greater consumer demand abroad than European electric cars. Sales of Tesla’s Model 3 have been successful not only in the US but across Europe and China. In contrast, European manufacturers are taking far longer to expand their business abroad. This comes as a result of the introduction of more electric SUVs from European manufacturers. As consumers across the globe often favour SUVs, it is likely that electric SUVs will gain traction in the coming months, likely at the expense of sedans and Tesla’s Model 3.

The increasing demand for electric vehicles can be put down to a number of factors, some of which arise from artificial factors. Most of the growth for BEVs in Europe, during Q1, was driven by fleet and business registrations. In fact, their share jumped from 54% in Q1 2019 to 59% in Q1 2020, registrations increased by 73%, and volume increased from 43,000 to 74,400 units. 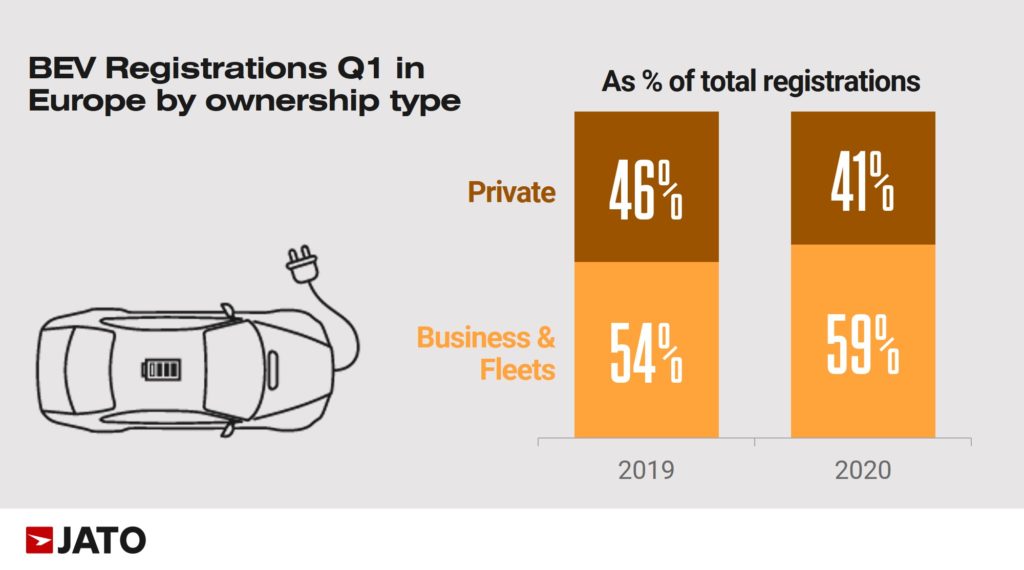 The growth in registrations, recorded by fleet and businesses, is much higher than the increase posted by private registrations (39%). Thus, a large portion of the demand for electric cars in Europe came from companies, rent-a-car and fleets. Self-registrations, on the other hand, were conducted by dealers in an attempt to meet sales targets set by OEMs.

The production of electric cars relates closely to the incoming CO2 objectives set by the European Commission. JATO is producing a detailed report outlining how far the automotive industry is adjusting and operating in light of the European goals in place for 2021. Electric vehicles are a core element necessary to achieve these goals, or at least, to help reduce incurring fines for not complying with the regulation. The rising BEV business registrations can be seen as an attempt to reduce their CO2 average and edge closer to these objectives.

What happened in April?

In April, Europe and the USA faced economic upheaval caused by the pandemic. As a result, China gained traction and once again increased sales, rising to 42,400 units compared to 16,600 units in Europe. Despite the big drop in Europe, these cars have become the new safe haven during these difficult times. Evidence of this came be seen in their record market share for the month – 17%.