New car sales in Europe were 6.4% higher in April 2015 than in the same month of 2014, according to the latest new car sales analysis from JATO Dynamics, the world’s leading provider of automotive intelligence. Year-to-date sales were 8.5% higher than a year earlier.

Continuing the trend of recent months, all of the Big five markets (France, Germany, Great Britain, Italy and Spain) recorded greater registration volumes than a year ago. After an increase of over 40% in March, Spain recorded only a 3.9% increase in April, but sales in April 2014 were unseasonably high, and the country joins the Czech Republic, Ireland and Portugal in achieving year-to-date growth above 20%.

Brian Walters, Vice President of Data at JATO Dynamics, commented, “Consumer confidence remains high in many European markets, leading to improved sales for the car industry across the continent. While some may view the lower growth in Spain this month as a sign of a softening market, taken in context with the monthly figures from previous years it is a return of the normal seasonality, but at a much higher level than before.” 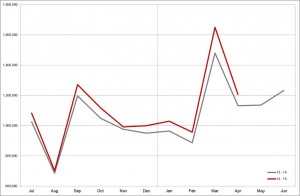 Volkswagen maintained its dominant position at the top of the sales table, increasing sales by 5.5% in April and 9.4% year-to-date. Ford, Renault, Opel/Vauxhall and Peugeot complete the top five for the month, while Ford is ahead of Renault in 2nd place for the year-to-date.

All of the top ten brands recorded increased volumes compared to April 2014. Renault achieved the strongest growth, up 15.2% in April and 13.4% year-to-date, thanks to continued strong sales of the Clio and Captur, and impressive sales of the new Twingo city car.

Outside the top ten brands Jeep’s new Renegade and Cherokee models continue to sell well contributing to a 170% increase in the brand’s April sales. Infiniti saw sales increase across the brand by 105% as more British customers bought their cars, and Tesla recorded an 87.2% increase as its Model S electric executive car continues to win customers in many markets.

The Volkswagen Golf retained its lead of the market but saw total sales for the month decline by 0.7%, losing market share in Germany, Spain and France. In contrast, its sibling, the new generation Passat achieved a 46.5% increase, the greatest growth in the top ten.

Renault’s Clio claimed 2nd place for the month, and posted a 14.2% increase in sales over April 2014 due to strong performances in Italy and Spain.

Outside the top ten, Peugeot’s new 308 continues to sell over 40% ahead of its predecessor’s performance last year, and the addition of 5-door versions to the latest generation of the MINI hatchback has driven a 92.2% increase in the model’s volumes in April, and a doubling year-to-date sales.