The European new car market continues to grow and economic conditions favor the increasing demand. During the first half of this year new car registrations in Europe’s Big 5 markets totaled 5.9 million units and the average retail price was €27,467 per unit sold (1 GBP = 1.18 EUR).

Germany topped the average with almost €32,000/car sold, while the cars sold in Italy posted the lowest average price at €22,421/unit. The reason for the big difference is that premium cars are largely more popular in Germany counting for 46% of total market’s income, while in Italy the big weight of small cars meant that the premium models represented 30% of the industry’s income in H1. Besides, the mainstream models average price was the highest among the Big 5, as Volkswagen and Ford recorded price/unit above the market’s average, leaving only Opel below that average.

In Italy the Fiat models registrations counted for almost 26% of the mainstream market, and 63% of them corresponded to small cars (A and B segment). As these cars are usually offered at the lowest prices, the popularity of the small Fiat Panda, 500 and Punto were key drivers to the final average price in the Italian mainstream market. However there is also a price issue in all this. The average retail price for mainstream cars excluding the registrations was €23,400 in Italy, against €31,550 in Germany. In other words, mainstream car are more expensive in Germany than in the other four markets, while they are cheapest in Italy. 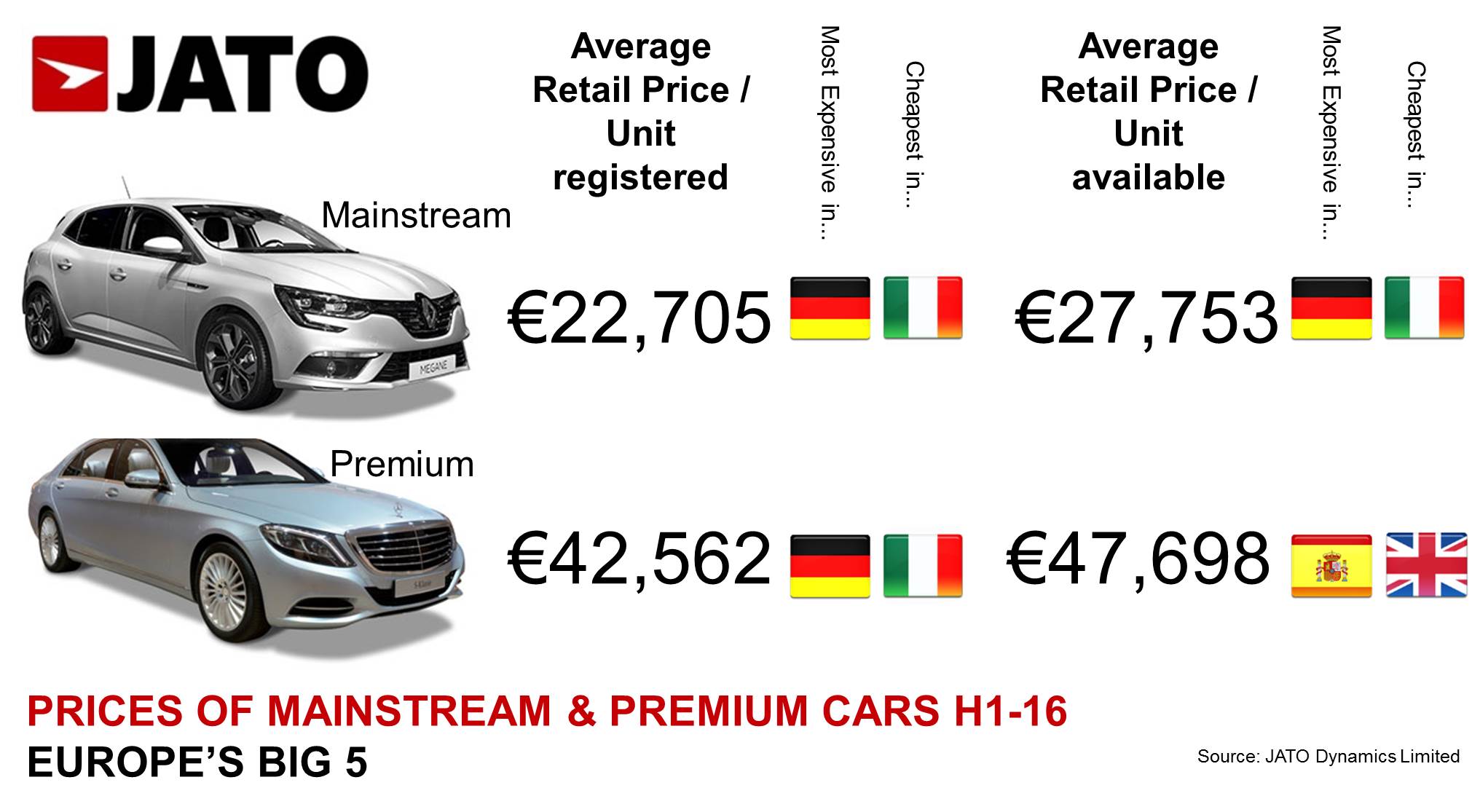 France is a different case. It is the market in the EU’s Big 5 to register the lowest premium penetration (in terms of volume) at only 14% of the total, but the average price of the mainstream cars registered there totaled €23,300/unit, which was the second highest after Germany. The reason for this is that two of the three French car brands registered average prices above the market’s average, right as it happened in Germany.

In Britain the average/unit sold in the mainstream market was risen by the strong weight Ford, Volkswagen and Nissan have, all of which recorded higher average price/unit than the total market. This is particularly evident in the model ranking as the Focus, Golf and Qashqai occupied the 3

rd, 4th and 5th position respectively in the H1 volume ranking, and their average price/unit sold oscillated between €25,500 and €29,400. In the premium market, the popularity of Mini brand allowed to reduce the average at €41,970, higher than in Spain and Italy, but lower than in France and Germany.
Finally in Spain the situation is interesting too. This market recorded the highest value in terms of average retail price for premium cars, but the second lowest average price/unit sold after Italy. This means that premium cars feature higher prices there but their market share is not as high as in Germany, France and the UK.

Want to know about the average price/unit sold by segments? Keep reading us.

Note: the values correspond to retail prices before any discount offered