The world’s current environmental and economic conditions have become the starting point for the development of the Electric Vehicles (EV), their rising awareness and increasing sales. The trend is more visible in the developed countries such as the USA or the European markets, where both car makers and consumers show an interest on the matter. In these economies the transport sector is the number one consumer of oil (in the USA, for example, this accounts for 70% of all consumption), so it’s not surprising that policymakers and the industry are increasingly looking to EVs as a solution. As they keep going in their introduction phase of the commercial life cycle, they face several challenges that include a landscape comprising of conservative consumers, regulatory hurdles and patchy infrastructure. 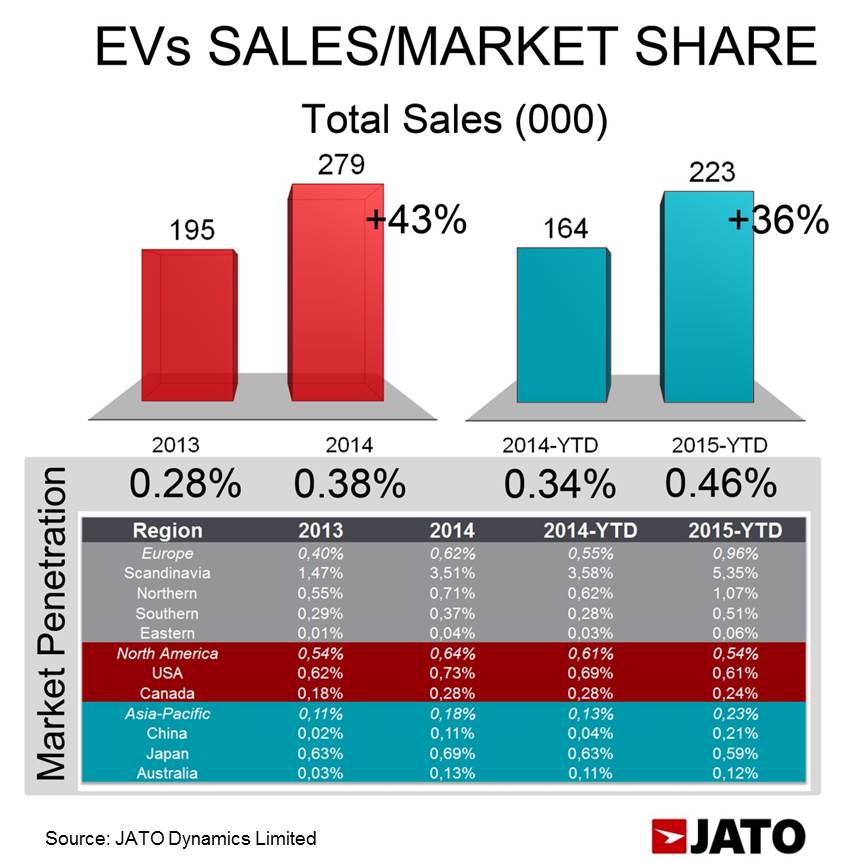 Through August 2015 EV global sales climbed to 223,000 units, up by 36% over the same period of 2014. That’s certainly a big increase but a low volume when compared to the traditional petrol, diesel and ethanol powered cars sales. However EV passenger car sales totalled 280,000 units in 2014, representing growth of 43% compared with 2013. EVs immediate challenge is to gain market share taking it from traditional segments and fuel types despite the fact that the recent economic factors such as the fall in global oil prices will continue to have the greatest influence on purchasing decisions, to the detriment of EVs.

The Most Important Markets
In terms of market share, Norway is the world’s largest market thanks to the support, incentives and benefits the EV can access to. By August 2015, around 21% of the total new car registrations corresponded to an electric car. That’s a lot considering their prices and the very few choices the consumer has. However, it wasn’t only a matter of Norway but also of its neighbors from Scandinavia, where EV’s total market share jumped from 1.47% in 2013 up to 5.35% by August 2015, the world’s largest percentage. Their penetration surpassed the 1% mark in Northern Europe (Scandinavia excluded), and it was followed by USA with only 0.61% market share. USA is the largest market by volume with 71,200 units sold between January and August 2015. It was followed by China, Norway, the UK and Japan.

The Main Players
Nissan leads the way thanks to its Leaf, which became the world’s best-selling EV during the first 8 months of 2015. Mitsubishi wasn’t far at the second place after posting a 24% increase of its Outlander PHEV model, the second best-selling EV. And finally Tesla with its luxury Model S managed to occupy the third position.