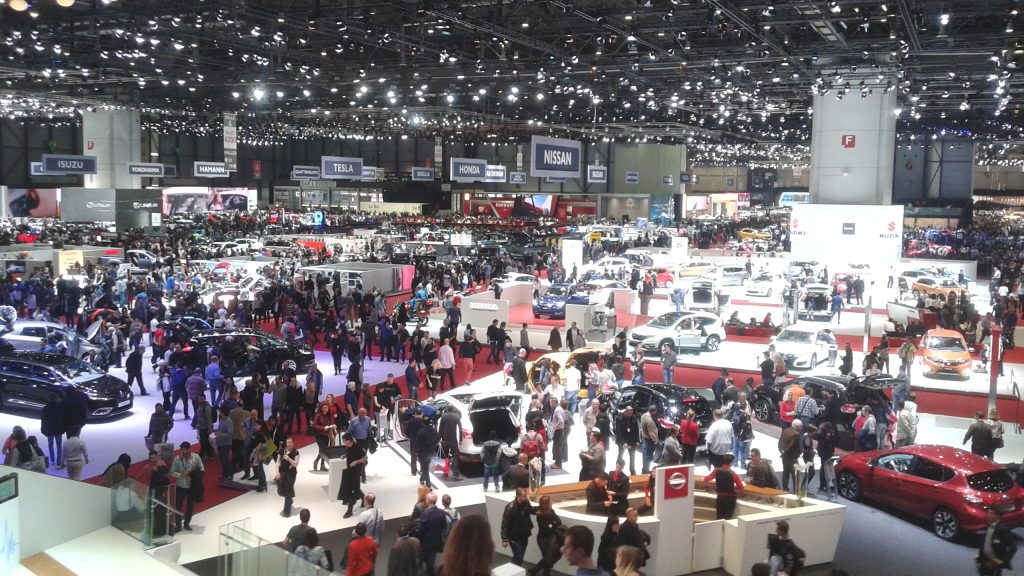 The 2018 edition of the Geneva Motor Show welcomes 15 all-new cars that are expected to play an important role in the car industry. With the increasing focus on alternative-fueled-vehicles, the event takes place when the European car market showed a strong growth in January but is expected to moderate its growth in the coming months. Hybrid, SUVs and all-new cars will drive the smaller growth this year, and the following models could be part of this trend.

Audi wants to reverse the negative results posted by the current generation and be back in the race against the latest generations Mercedes E-Class and BMW 5-Series. The A6 has been always one of the top 3 best-selling premium executive cars, but the current generation has been available since 2012. Therefore, it lost some ground to the renewed E-Class (2016) and 5-Series (2017), with its global sales falling by 7% to 252,000 units in 2017. European volume fell by 16% in a segment that grew by 13%. 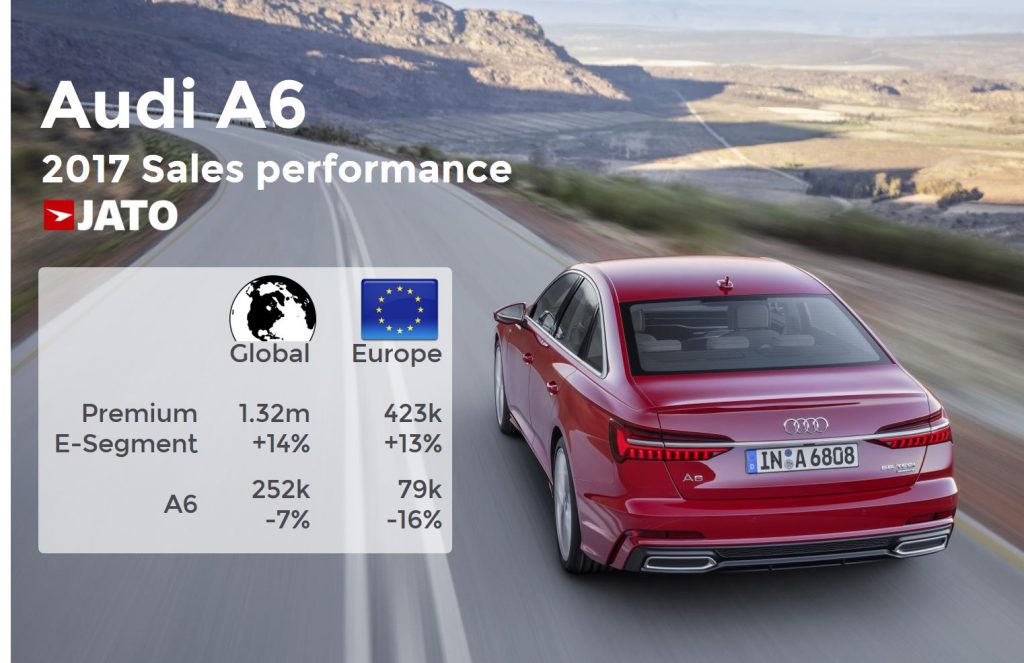 The all-new generation hits the market quite earlier than expected as the first generation was introduced in 2014. After the introduction of the all-new X3 in 2017, it was the time for the X4, another midsize SUV that has sold quite well until last year when its global volume decreased by almost 10% to 48,600 units, of which 21,800 remained in Europe (-13%). The arrival of the Mercedes GLC Coupe, which sold around 55,000 units globally in 2017 is the main cause of its drop.

We’ve seen it already in USA, but it took more than a year to arrive in Europe. With the new generation, Honda aims to grab a higher market share in the compact SUV segment. Last year, the brand registered 34,000 units in Europe, down by 22%. In contrast, the European mainstream C-SUV segment posted a massive growth of 33%. Globally speaking, the C-RV is still doing very well, as it was the second best-selling C-SUV behind the Toyota Rav4. Two in three of the CR-Vs sold last year remained in USA and China. 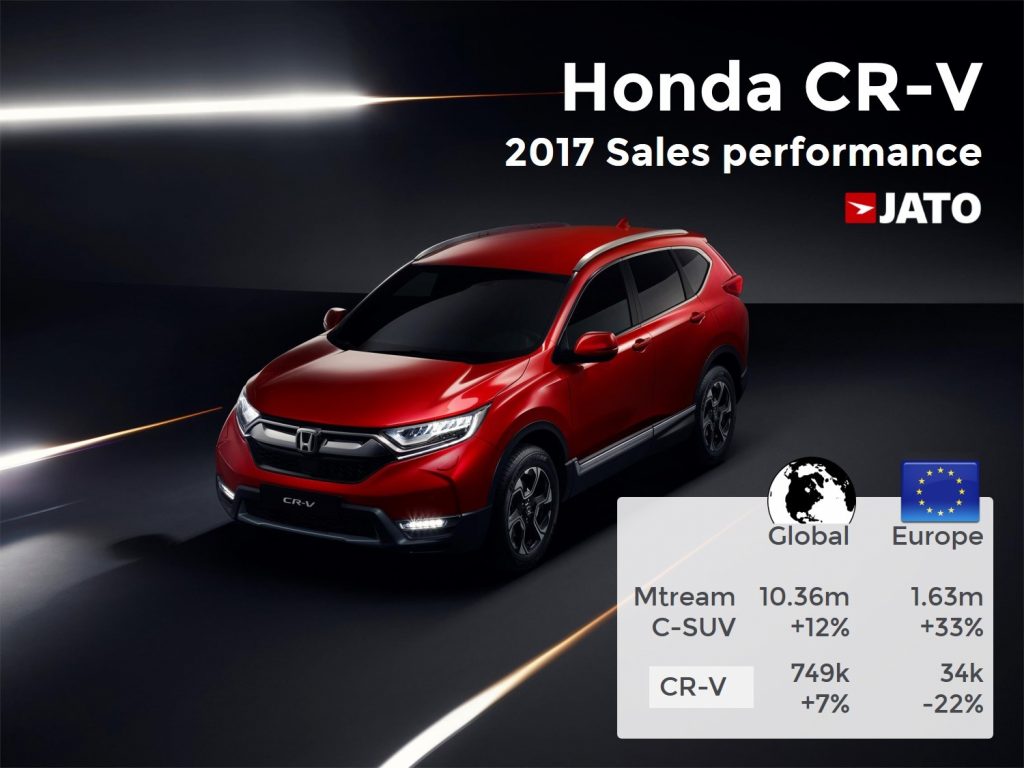 The Santa Fe has been in the market since 2001 through 3 different generations. The fourth one will hit global markets in 2018 in an attempt to help Hyundai to increase its sales again. Due to the problems in China and Korea, and the downturn in North America, the global volume for the Santa Fe in 2017 fell by 14% to 273,300 units. It sits in the mainstream midsize SUV segment and rivals with the popular Nissan Rogue/X-Trail, Toyota Highlander, Ford Edge, and in Europe with the Skoda Kodiaq, Volkswagen Tiguan Allspace and the Peugeot 5008. Global sales for this kind of vehicles grew by 17% to 5.4 million units in 2017. 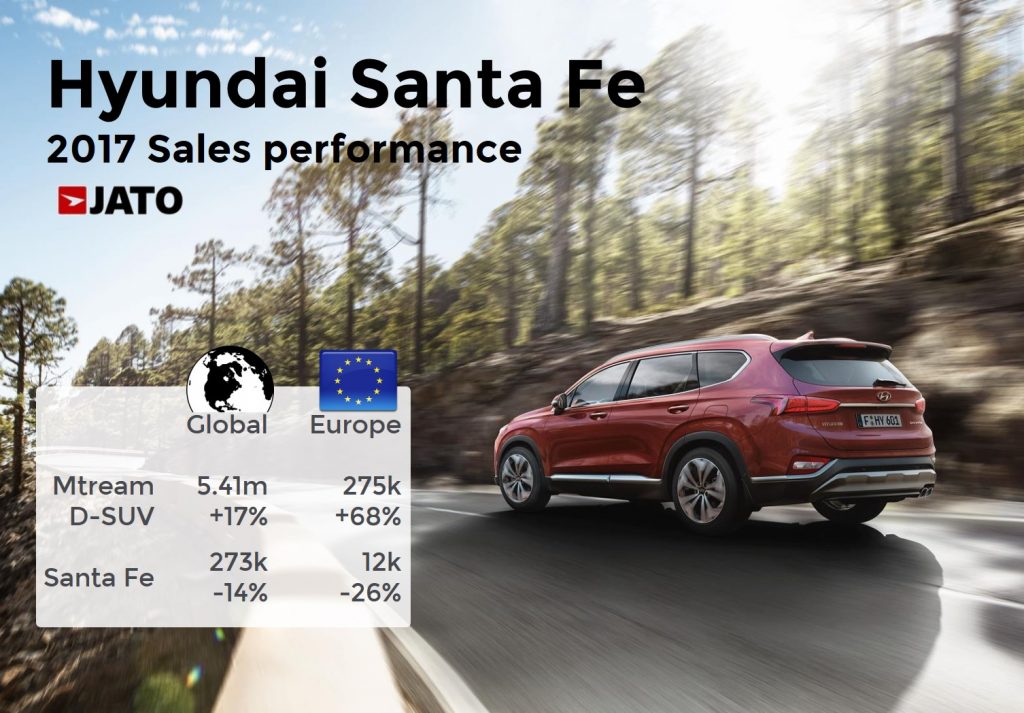 It is one of the stars of the show. The new Jaguar keeps the concept shapes presented some months ago and is set to become a referent in the premium electric category. Based on its dimensions (overall length of 4,68m), it sits in the midsize SUV segment, and doesn’t have direct competitors yet. It is the very best all-electric SUV available in Europe after the Tesla Model X. With current AFV sales soaring, the I-Pace won’t have any problem to gain a decent position in the SUV rankings.

It is another compact evolution and aims to be a real protagonist in the compact segment. The C’eed was launched in 2006 and this is the third generation. It was Europe’s 11th best-selling compact car in 2017, with its volume falling by 10% to almost 70,000 units. The new model should improve Kia’s position in the tough segment but won’t have an easy task as Toyota is also updating the Auris and Fiat is doing quite well with the Tipo. Around 80% of the C’eed global sales take place in Europe. 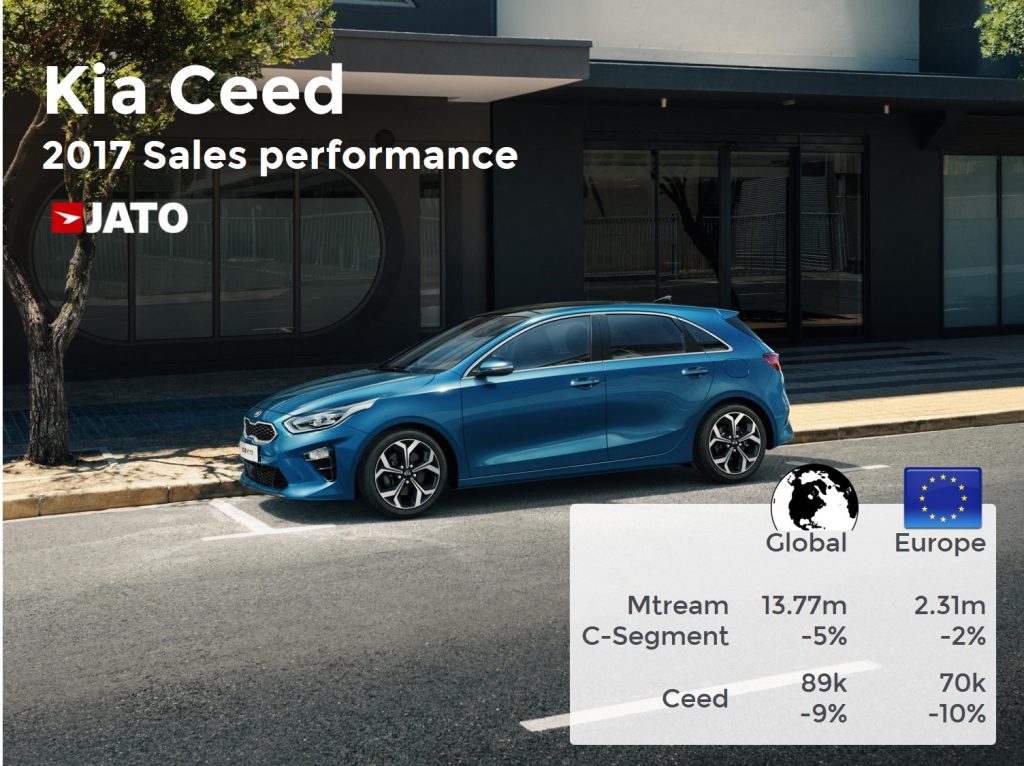 The UX is Lexus first compact SUV and will sit below the NX. Therefore it will rival with the BMW X1, Mercedes GLA and Audi Q3 and is expected to bring more clients to Lexus around the world. However, this car should attract more consumers from Europe and China, where this segment is more popular. Last year, SUVs counted for 60% of Lexus global sales.

The A-Class is one of the protagonist of the premium compact segment selling more than 176,000 units last year (+2%). Along with its sedan version, both models sold 311,000 units worldwide, against 316,000 for the Audi A3 (hatchback and sedan) and 275,000 units for the BMW 1 and 2-Series (+11%). The Mercedes posted a lower growth rate mostly because it got aged. In fact, it posted brilliant results considering the fact that it will be soon replaced by the all-new generation. Usually the industry see drops in the final years of the commercial life cycle. It is not the case for the Mercedes A-Class. Of course the popularity of premium C-SUVs affected growth of the premium compact cars, but the premium C-Segment has resisted more than the mainstream segments. 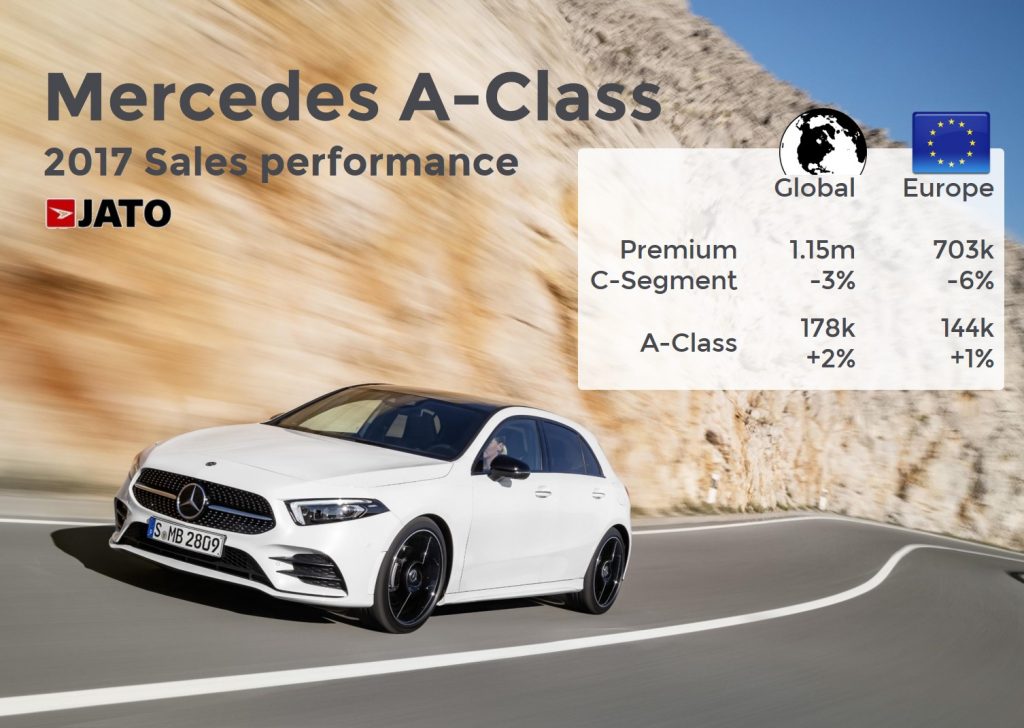 Peugeot insists in a segment that doesn’t grow anymore. European volume fell by 12% in 2017 with all top 10 by models posting negative changes (except for the Kia Optima). Total registrations for mainstream midsize cars recorded the lowest level since 2014 at 554,000 units. It is a segment especially dominated by VW Group (Passat and Superb), Ford and Opel, which all controlled 71% of the total. French and Asian brands don’t play an important role. However, the 508 is a popular car in cities like Paris, so Peugeot will try to keep its important market share in France (21% in 2017). 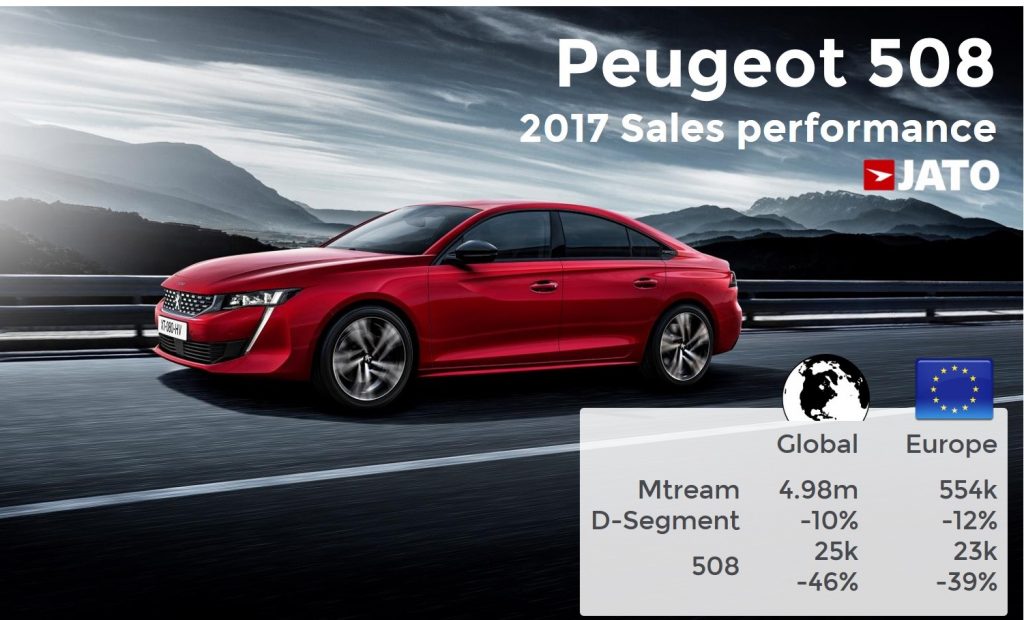 The third generation is not only important from the point of view of Toyota’s presence in the European compact segment, but also because it has announced that it will be built in its UK plant. It means Toyota will continue to build cars in the UK despite the big uncertainty about Brexit and its consequences. Around 60% of the Auris global sales remained in Europe last year, with volume down by 12%, and occupying the 9th position in the mainstream compact segment. This car is also sold as “Corolla IM” in North America.

Volvo is strong selling SW, and the V60 is following step after the V90. The new generation features the same design shapes of its bigger brother and therefore aims to grab a larger piece of the premium midsize segment. However, it won’t be easy: SW are not popular in China and USA. In contrast, Europe is clearly the main market for SW. Even if they have lost clients during the last years, Europe have another understanding of SWs. Especially in Italy, Germany and Northern Europe, the SW are not seen as “boring cars” as in the rest of the world, but as functional and in some cases, like in Italy, even more cool than their sedan counterparts. However, everywhere in the world, the midsize (Volvo S60/V60) and executive (Volvo S90/V90) segments are losing ground, and even SW in Europe are not as appealing as in the past. 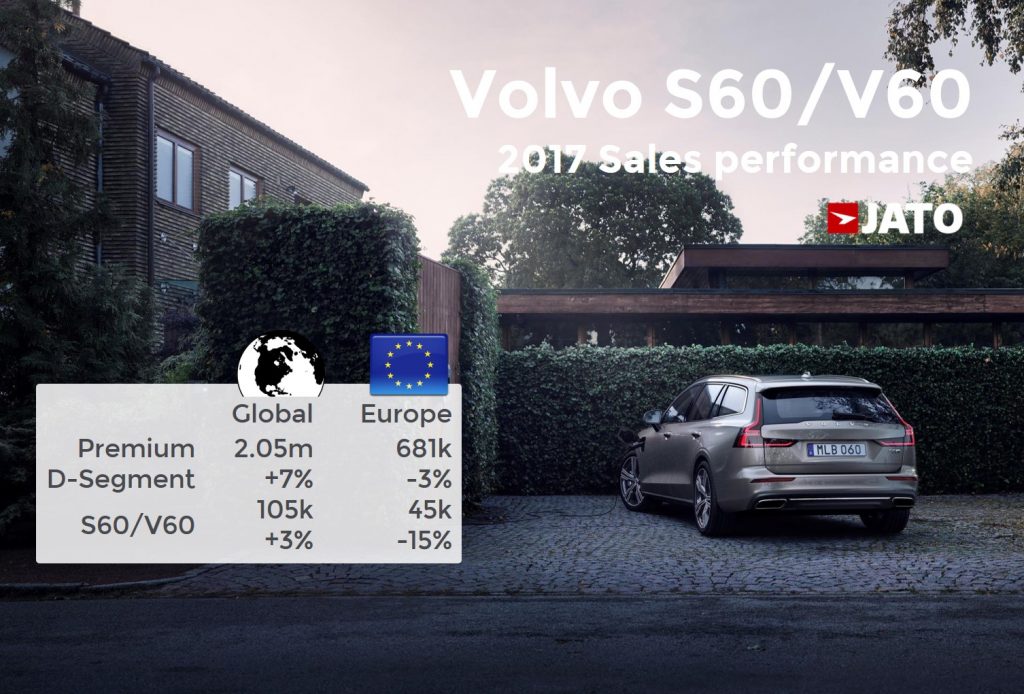