Global car trade is still far from being free 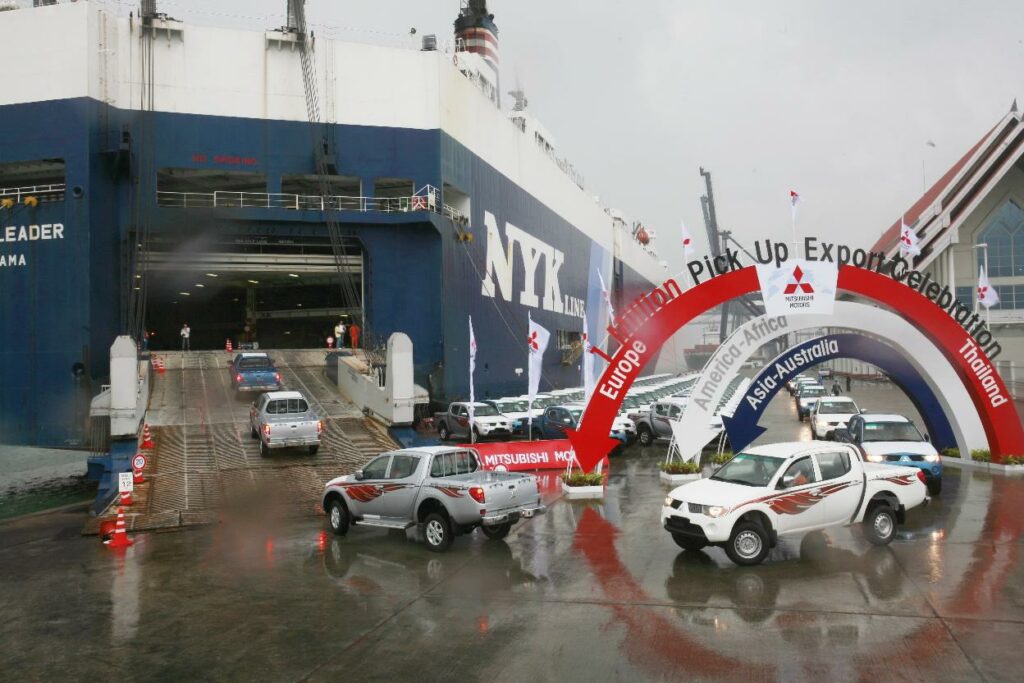 The recent trade dispute between China and America has grabbed the attention of both the media and analysts when it comes to the consequences it could have on the car industry. 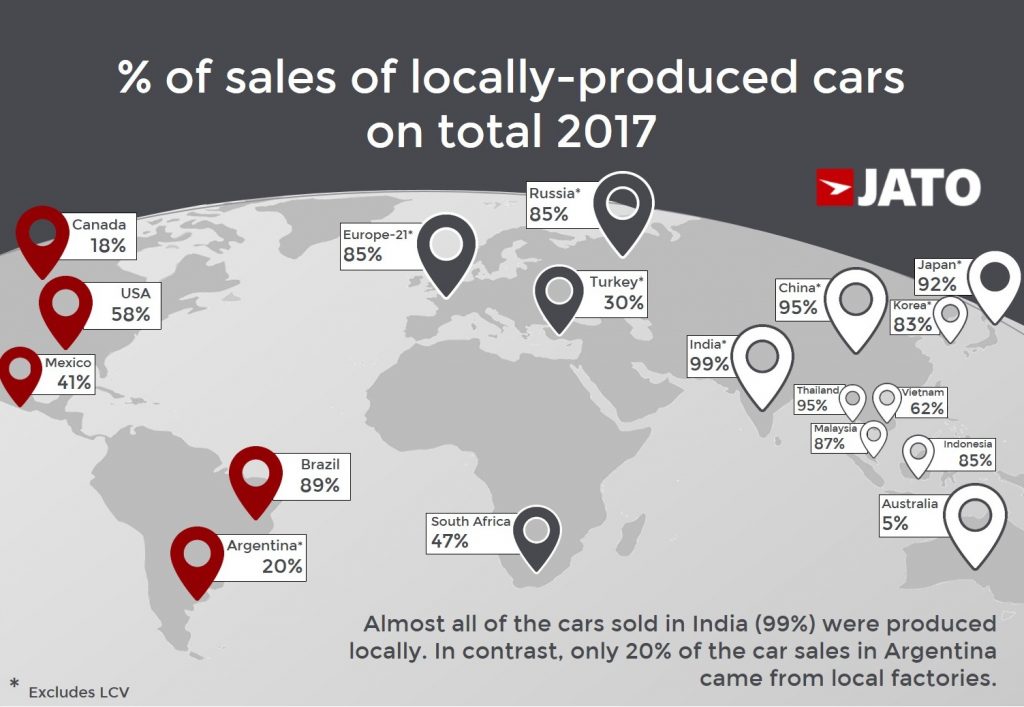 Trading internationally is now easier and more frictionless than ever before due to more efficient transportation means, better communication and clearer rules – yet this conflict is now arising between China and America. The issue is primarily because of differences between labour costs. Countries with big populations and low labour costs, just like China, have become the ideal destinations for many car makers wishing to produce cheaper cars. This was the case in Eastern Europe and Mexico, which are now two important hubs for car exports. 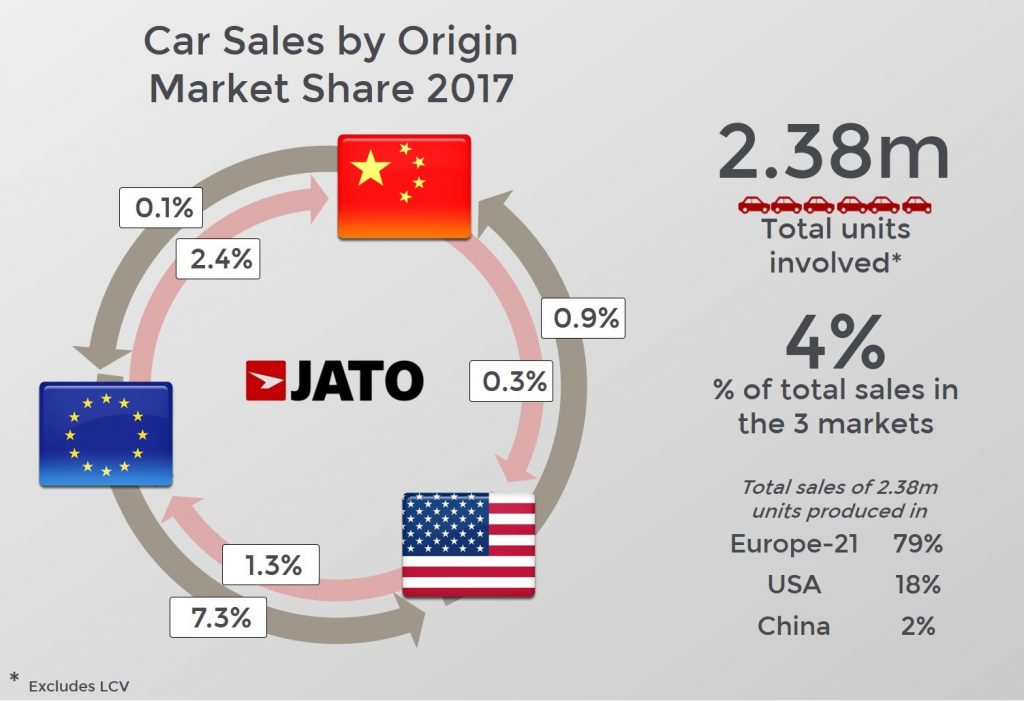 As developing countries gain traction in the automotive world, the traditional markets (USA, Europe and Japan) are doing their best to maintain their positions.

Even if most car makers have a global presence to make use of cheap labour costs, the truth is that local production is still a must-have in many markets – both developed and developing ones. It is almost impossible to have a decent market share without producing locally in markets like China, Brazil, India or Japan. It can be because of trade barriers (visible and non-visible) or cultural issues, but consumers around the world continue to buy local products. 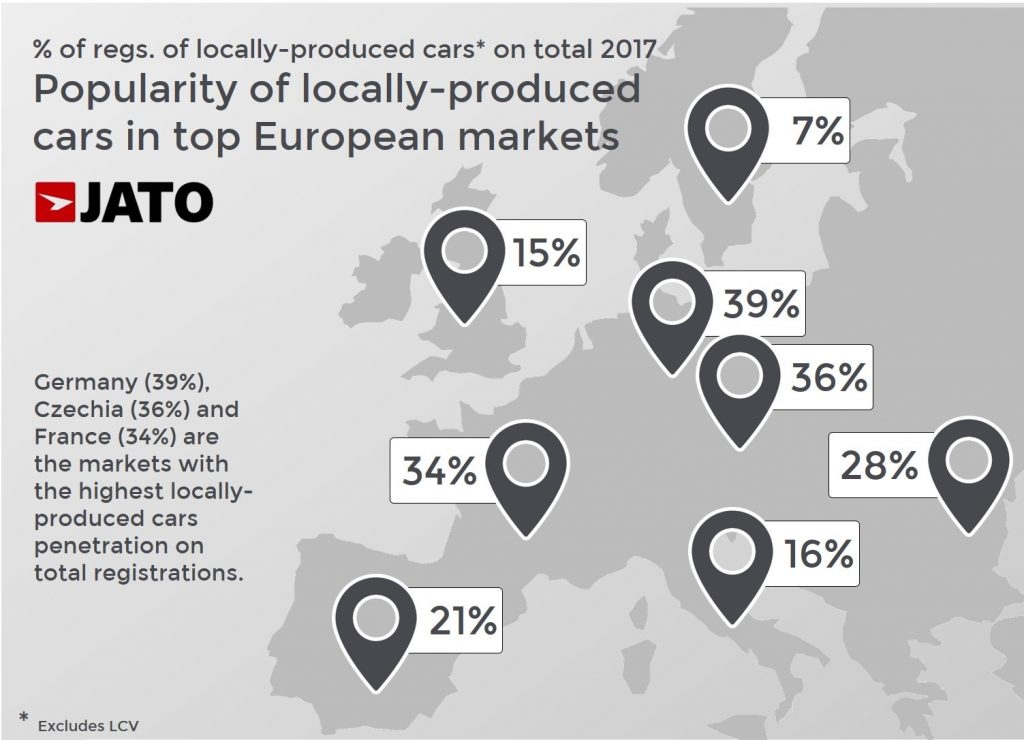 This shows that the car trade is not as open as people think, and there’s still a long way to go before the markets are fully open. While the US government is looking to modify its existing trade agreement with Mexico and Canada to improve its position, negotiations for a transatlantic trade and investment partnership (TTIP) between the US and the EU have frozen. Meanwhile, the EU and Japan are trying to get their deal approved, which will remove EU tariffs of 10% on Japanese cars and the 3% rate typically applied to car parts.

JATO’s figures indicate that the majority of sales in the main production countries are cars that are produced locally. This is more evident in Asia, where the economies aren’t as integrated, and where there are still big differences in the needs and preferences of consumers. While consumers in Japan clearly prefer city cars, their counterparts in China choose SUVs and compact sedans; India opts for subcompacts; and drivers in Thailand have a preference for pickups. It means that most of the local production is oriented to supply local demand, which may differ considerably. 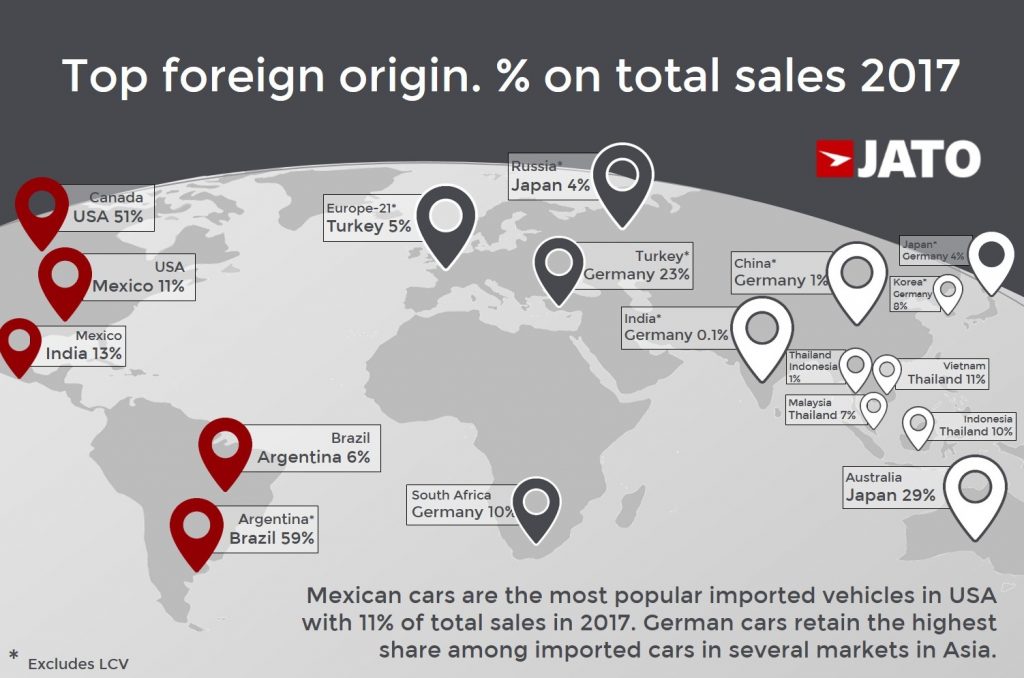 This divergence happens at a global level too. Europe’s popular hatchbacks are a rare thing to see in the US. The budget small cars in Brazil contrast to the giant pickups bought by almost 1 in 5 Americans too.

Nevertheless, there are some key markets where the majority of cars are actually exported. This is the case in Turkey, where most of the locally produced cars are exported, making Turkey a key export hub for the industry. Mexico is also a good example. Unlike its partners from the north, the large number of free trade agreements signed by Mexico mean it too exports are large number of cars. Comparatively, US and Canadian-made cars counted for only 12% of Mexican sales in 2017, which was fewer than the percentage of Indian-made cars (13%). 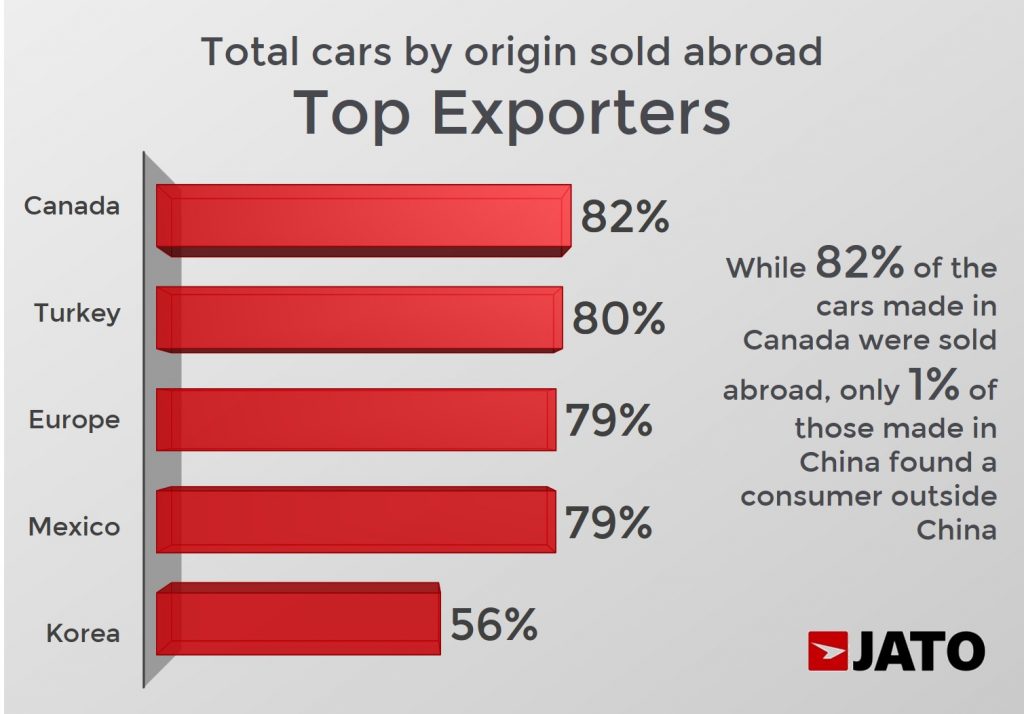 In South America, Argentina-made cars counted for 20% of Argentinian car market, while Brazil, due to the MERCOSUR trade bloc, accounted for 59% of the total.

The Australian and South African car markets are particularly interesting.  Most of their production excludes SUVs (both countries produce only two each), so they struggle to find more destinations for their cars. Domestic demand for “made in Australia” cars started its free fall decline in 2006 due to many reasons. Firstly, it is a unique market where big sedans and car-derivedpickups are still popular. Secondly, Holden, Toyota and Ford continued to focus on producing big sedans and pickups, leaving the increasing SUV sales to their foreign competitors. 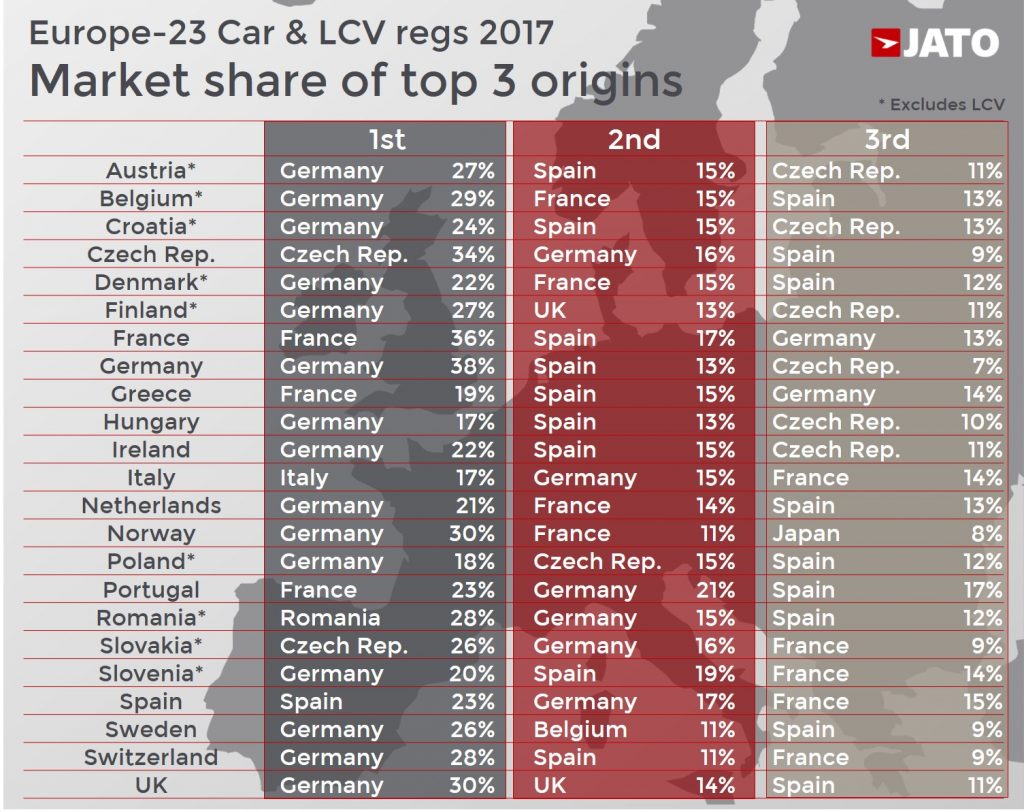 It is interesting to see how the US imports more foreign cars than its counterparts in Europe and Japan. The figures confirm that imported cars have a larger presence there – and it probably explains why President Trump wants to change this through modified trade agreements. Due to NAFTA, Canadian and Mexican-made cars account for 20% of total sales in the US, but imports from Japan and Korea also have an important part of the market too (14%). European-made cars accounted for 7% of 2017 car sales in the USA. 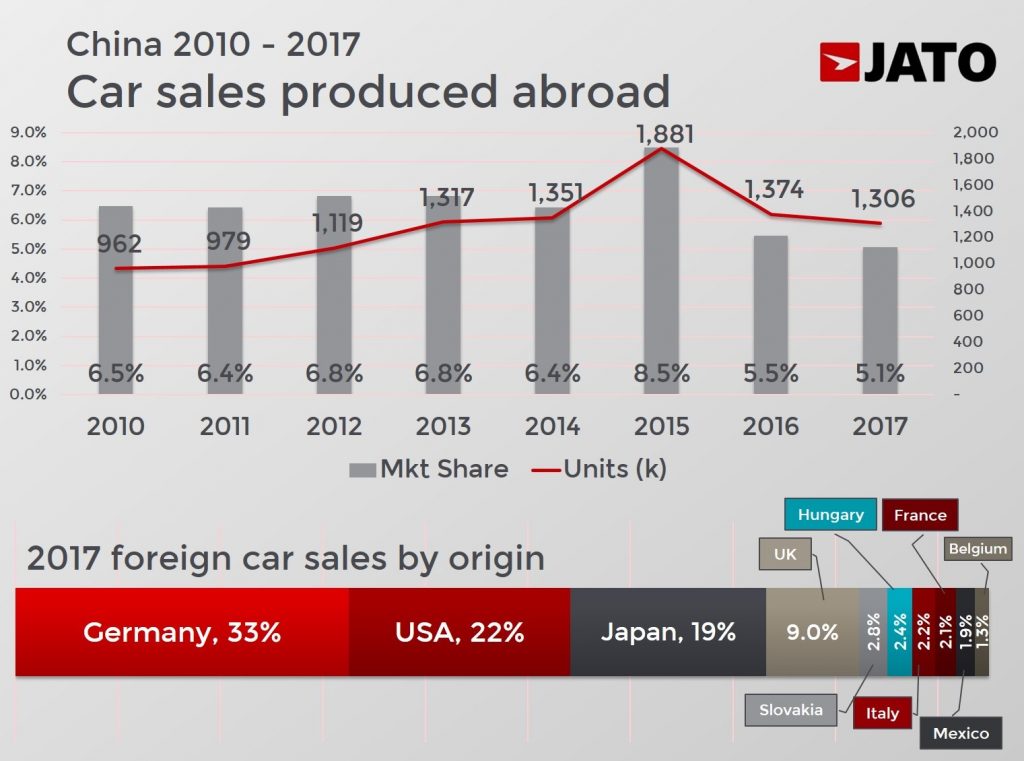 China announced last week that it was lifting its restrictions on imported cars. By relaxing foreign ownership limits on cars and possibly reducing taxes on imported cars, China is getting ready to become a big player in the global car market. The decision (which will take effect gradually) is likely to have an initial negative effect on local car makers, but is intended to accelerate forward the Chinese auto industry and its intention to gain market share in foreign markets. With more competition at home, Chinese car brands will need to join forces (there are more than 70 local brands available now) to face their Western competitors, and at the same to explore new markets with high quality products.