The latest data collected by JATO indicates that global demand for premium executive cars decreased by 10% during the first three months of 2019. Premium executive cars are feeling the effects of the issues impacting the wider market, such as the diesel crisis in Europe and the lack of electrified models within their lineup. 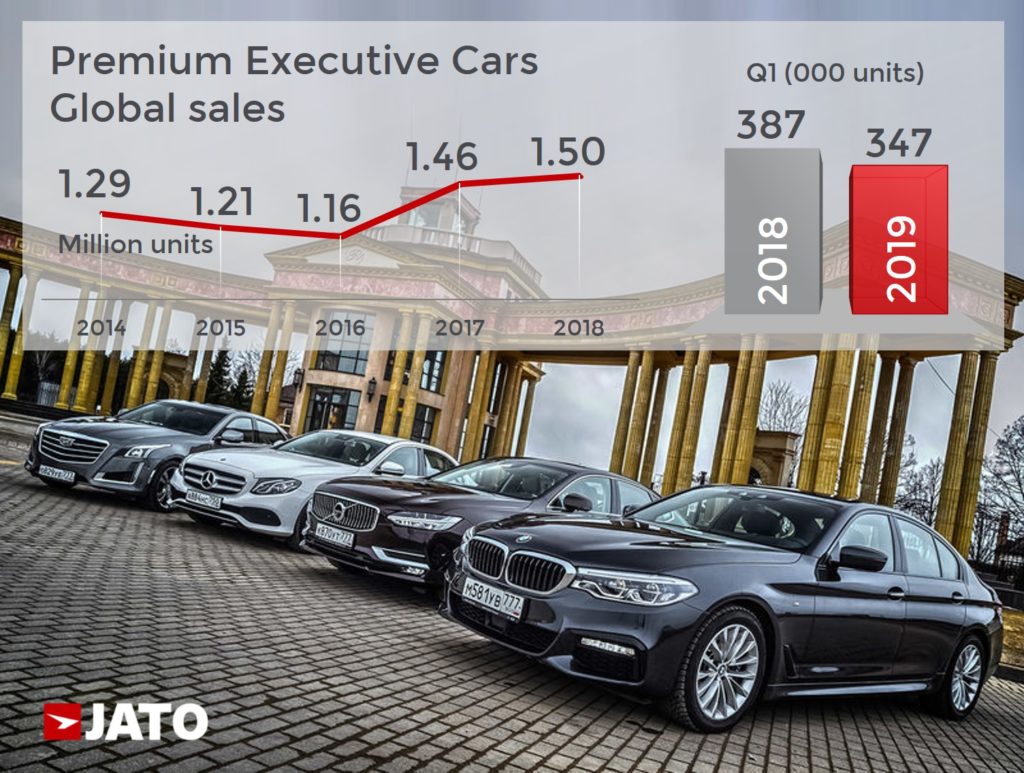 In addition to the continuous drop in demand in the USA, where all kind of sedans have lost traction, the segment’s also losing popularity in other regions. The huge drop in demand in the  Chinese market turned last year’s strong growth (+17%) into negative results in Q1-19, where volume was down to 141,100 units – a drop of 6%. However, it’s still the largest market by some way for the car type, as Europe, the second largest market, totalled just 100,000 units – down by 13%. 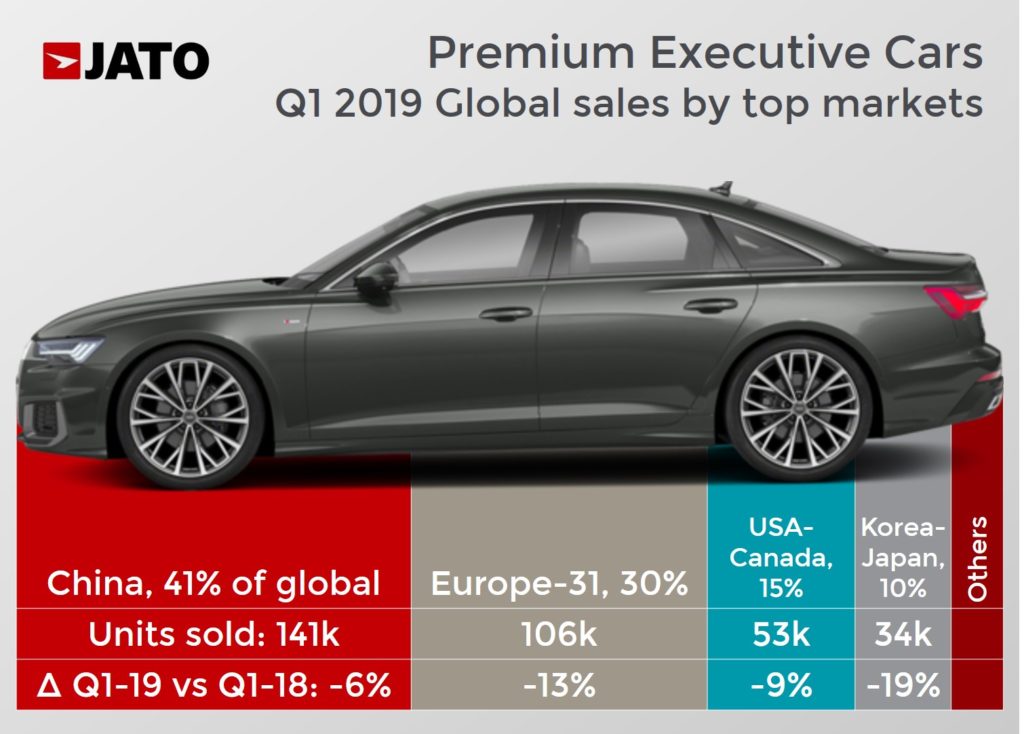 Consumers are also changing their taste. One important reason for the segment’s drop in sales can be explained by fewer deliveries of the station wagon versions. Even if the majority of sales are composed of sedans (82% of the overall total), their demand fell by 9% during the quarter. The biggest drops were recorded in SWs, which represented almost 15% of the segment’s global sales, with their volume down by 16%. 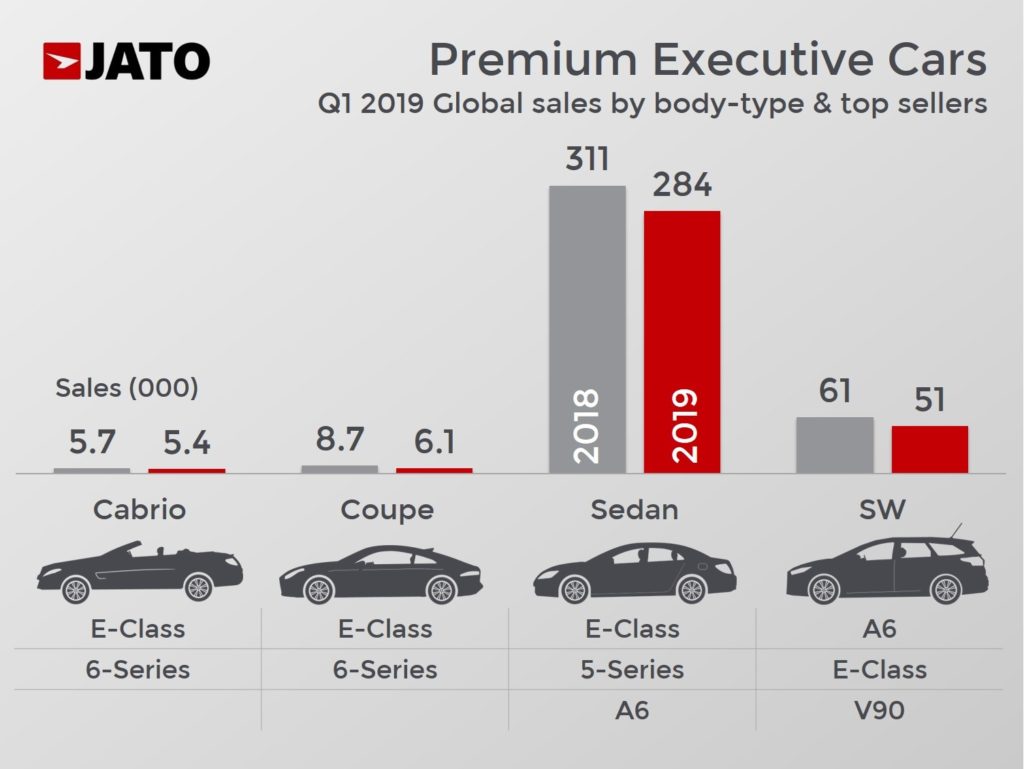 The sporty versions of these cars – coupes and cabrios – also recorded negative results. In the case of the coupes, their demand dropped by 30% to only 6,100 vehicles. This comes after Mercedes recently announced that sports versions may be axed from the US market. Meanwhile, premium executive convertibles sold 5,400 units – down by 5%.

Strong growth in hybrids and electrics is not enough

One of the biggest opportunities for the segment in the coming months is the arrival of electrified versions to the market. With the exception of very few models, hybrid and electric engines are available in most cars in the segment. Lexus remains in the lead thanks to its hybrids, but BMW is doing very well with the plug-in hybrid version of the 5-Series. As more efficient engines arrive and batteries become cheaper, it’s expected that alternative fuels will offer hope for the segment in future. The cars are popular among top executives and company fleets, especially in markets like Germany and the UK. Manufacturers will need to adapt and offer more electrified versions in order to stop the decline in sales. 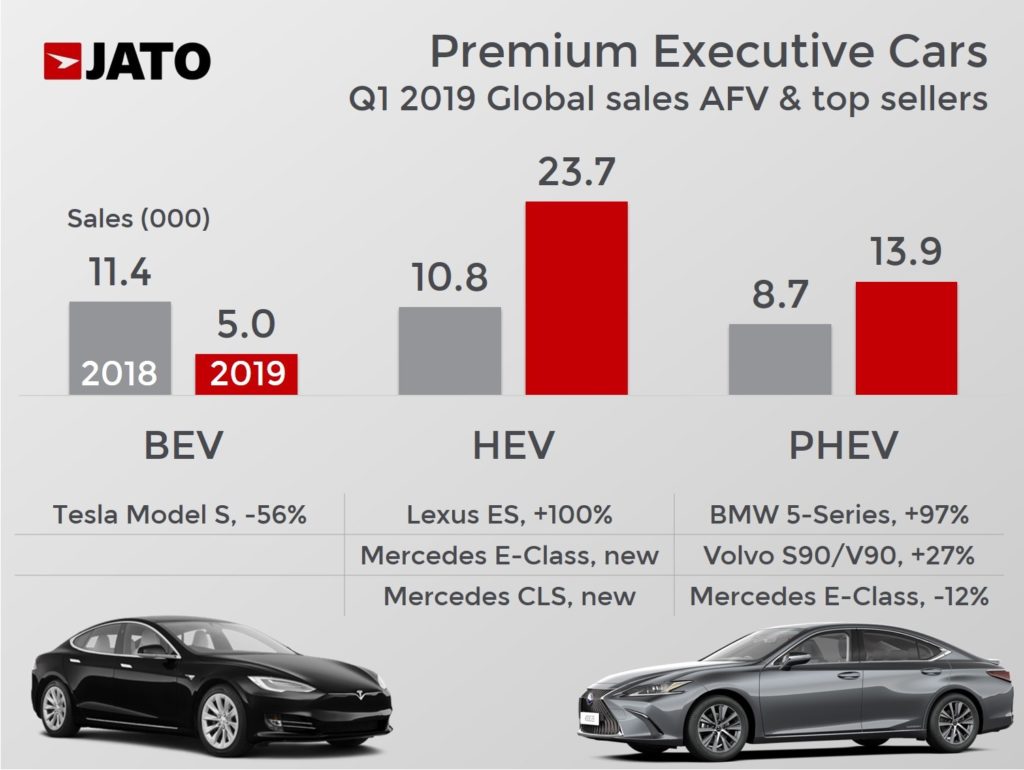 This is particularly true in Europe, where diesel executive car demand fell by 12% in Q1 2019 following a decrease of 13% in the full year 2018. However, diesel is still the most popular fuel type – counting for 72% of total registrations during Q1.

As expected, Audi, BMW and Mercedes are the market leaders in this segment. During the first three months of 2019 , their market share increased from 72% in Q1 2018 to 75%, despite the double-digit drops recorded by BMW and Audi. Mercedes was the only one of the three to drive growth.

Lexus also stood out as one of only two brands to register growth in the segment. Thanks to the arrival of the new generation ES, the brand has resisted the market downturn and is even gaining traction in markets like Europe, where the Germans control 84% of sales.

In fact, the strong presence of the three Germans and the shrinking size of the segment makes it even more difficult for new players. In fact, Infiniti has announced it will leave the European market; Genesis has struggled with its sedans as it waits for SUVs; Maserati’s presence has shrunk with the aged Ghibli; and Jaguar has not gained traction as expected. It’s not hard to see why other premium brands like Alfa Romeo do not dare enter the segment.

From OEM and insurance to leasing and online retail, our newsletter delivers a round-up of all the latest industry… https://t.co/zEcK7fMfal