Global sales of AFVs surpassed the million mark during Q1 2018 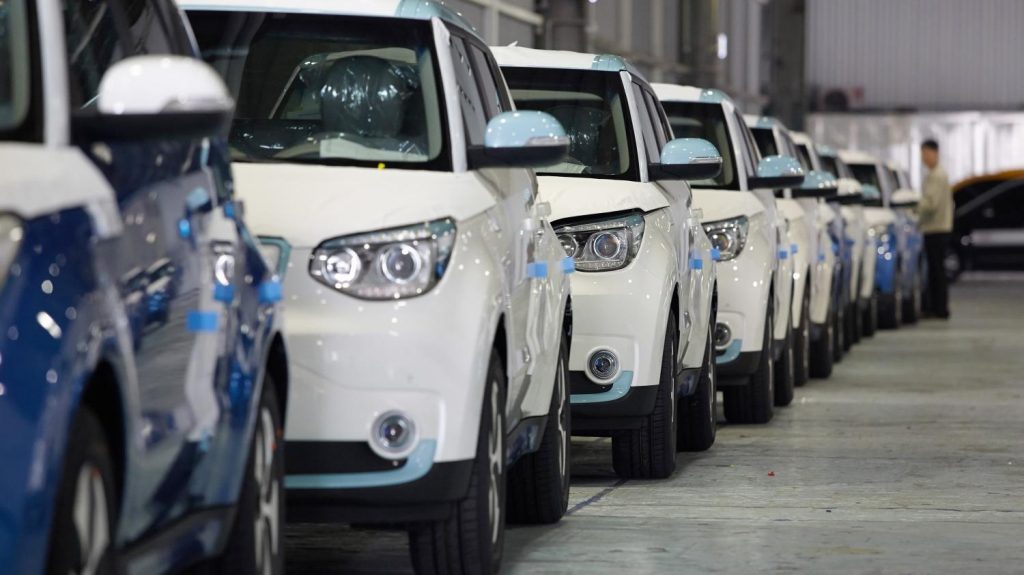 Results from Q1-18 show that demand for AFVs is continuing to expand across the globe. During the first three months of the year, 1.09 million AFVs were sold worldwide. This is a 21% increase on Q1 2017, marking the fuel-type’s best-ever Q1 performance. Despite hybrids counting for two in three of every AFV sold, most of the growth was actually driven by fully-electric and plug-in hybrid cars. 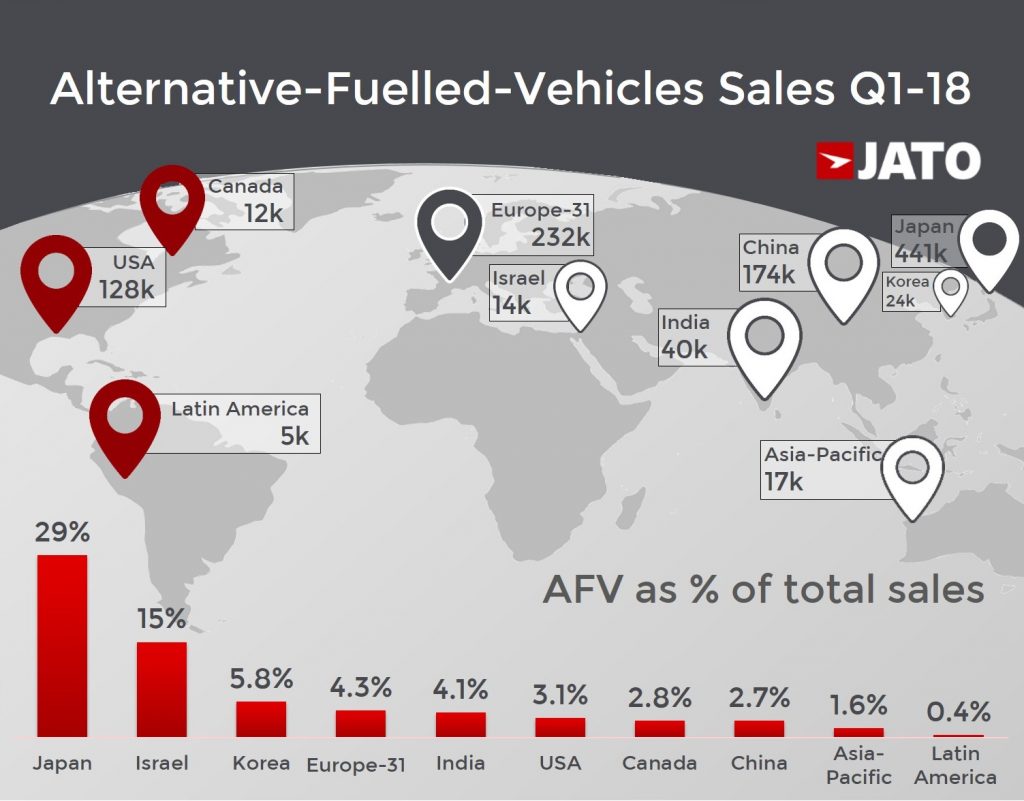 Due to the strong presence of Toyota, Japan is still the largest market for AFVs, with 441,000 units sold during the quarter. China outsold the US and became the world’s second largest market with 174,200 units sold, marking a huge volume increase of 137%. This perhaps shows that actions taken by local authorities in China to crackdown on pollution issues are working. 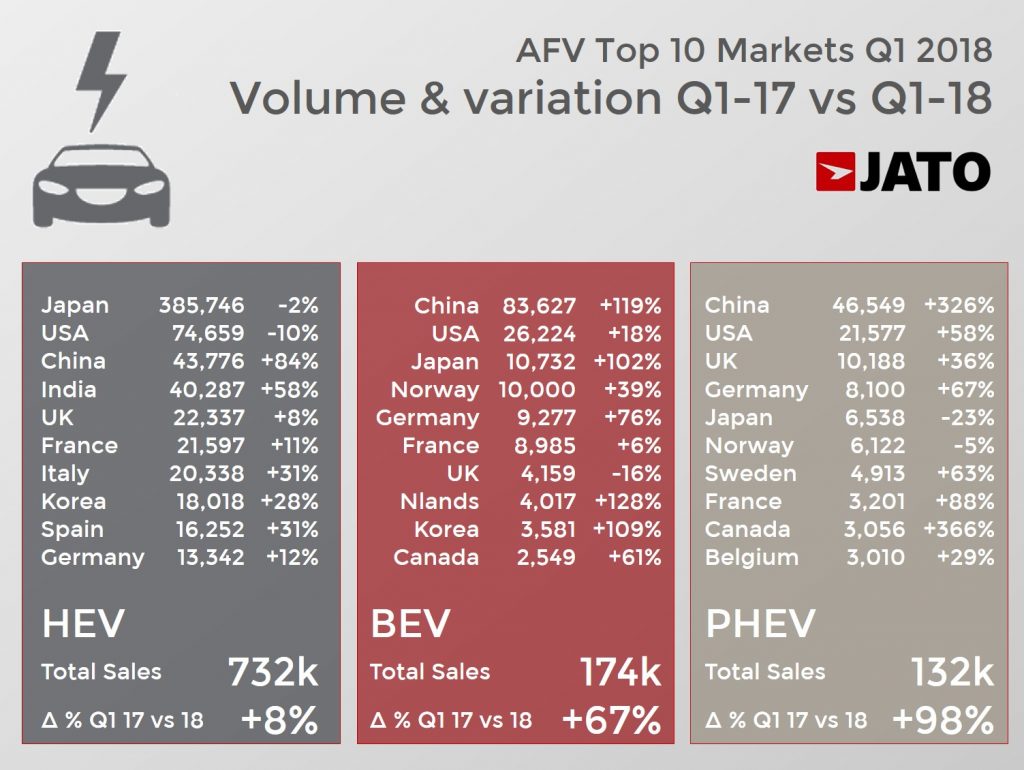 The other big performer was India, which outsold France and the UK to become the fourth biggest AFV market – largely thanks to Mahindra’s new hybrid cars. Currently, there is a big debate in India about which technology to invest more in: fully-electric or hybrids. India is likely to follow the Japanese case, which has focused more on hybrids following the leading position of Toyota. As Suzuki is the biggest player in India (45% market share) and is developing hybrids instead of electric cars, the coming benefits designed by the government could be focused on hybrids. This is even more probable if the ties between Toyota and Suzuki get stronger. 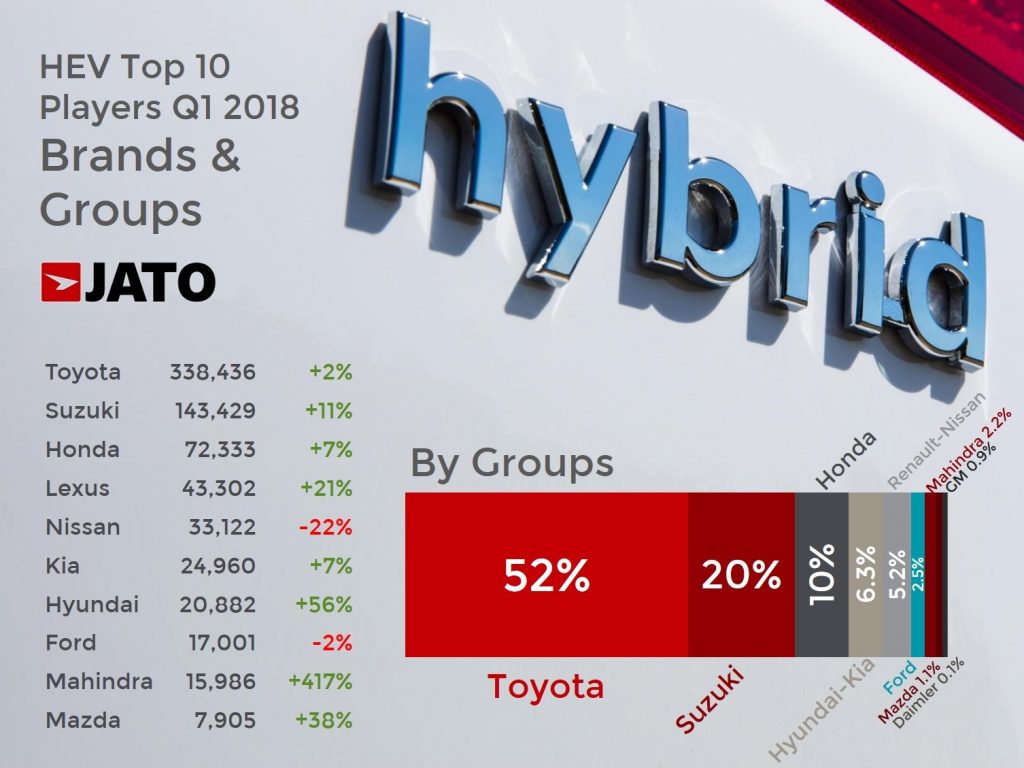 Toyota and Lexus continued to lead the HEV market, accounting for 52% of total sales. The Japanese car maker posted an increase of 3.4% during the quarter, as lower demand for the C-HR and Prius was offset by the double-digit growth recorded by the Yaris/Vitz, Rav4 and Lexus NX. Suzuki consolidated its position as the second most popular brand, totalling 143,400 units – 136,700 of which were sold in Japan and India. 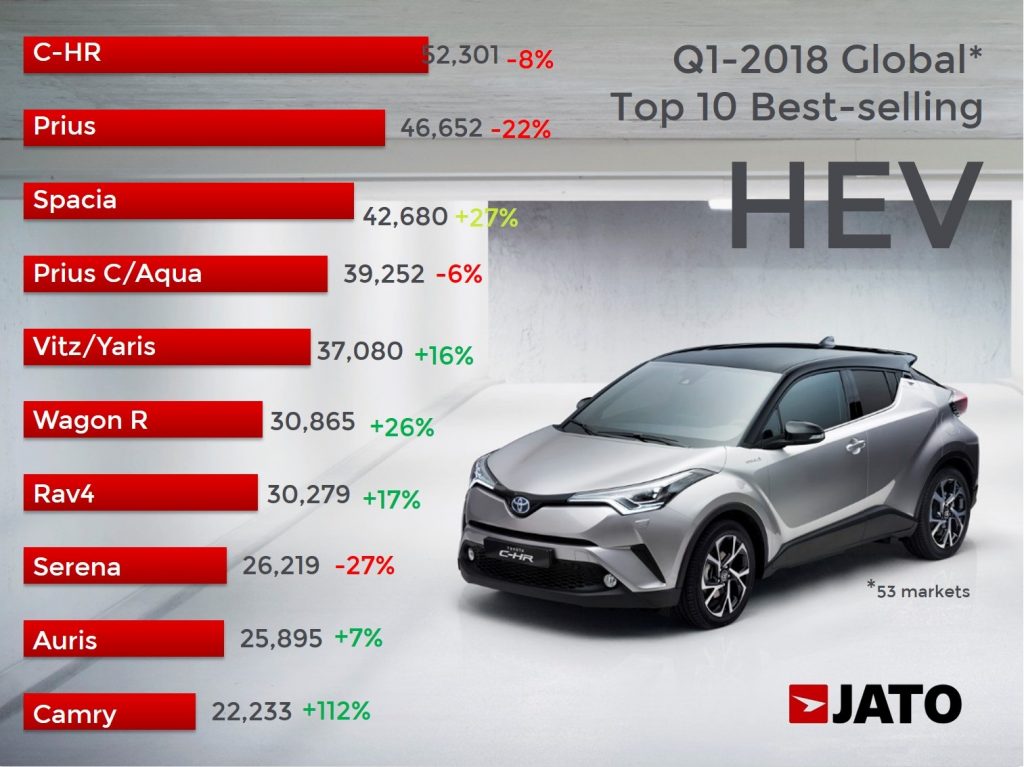 China was the biggest market for EVs during Q1-18, with volume up by 119% to 83,600 units as demand soared. Consumers in China are latching onto the more affordable EVs that are now available, and this is having a wider impact on the overall EV global market. EVs will become the car for the masses – and that is because of China. In fact, the global market share of Chinese brands jumped from 35% to 46% in Q1-18, and they can be expected to grow even further in future as they will start hitting global markets. 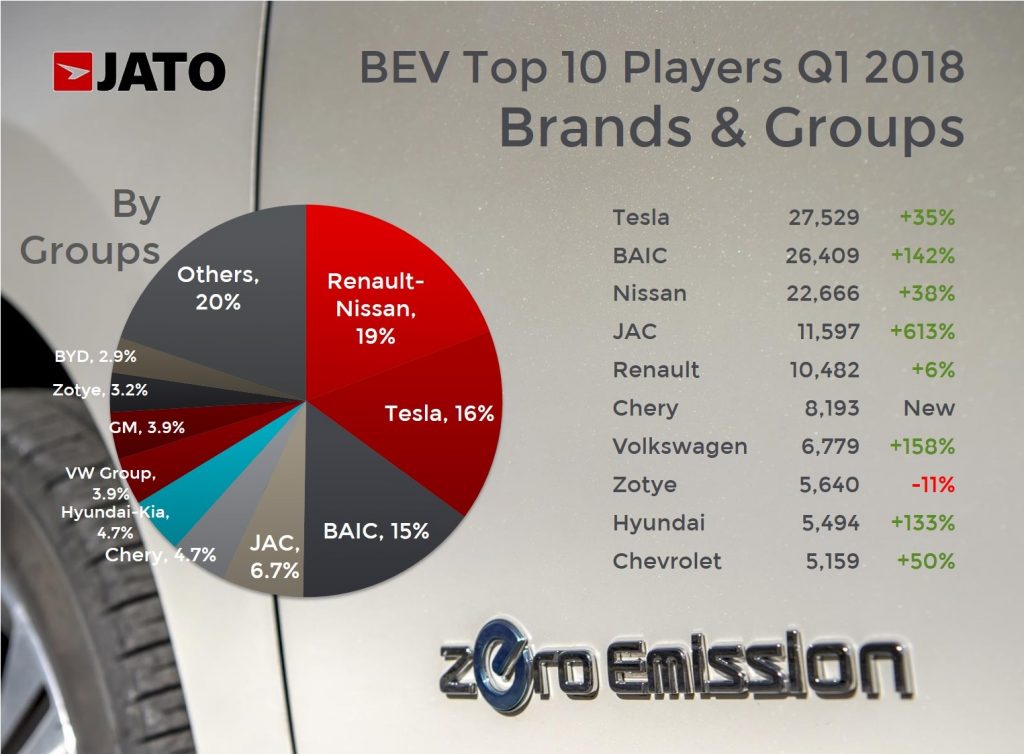 Europe came second with 46,500 EVs sold, up by 74%. Norway narrowly beat Germany to the top-spot in rankings by country, but the latter did post a 76% increase to 9,300 units. Germany’s results were boosted by Smart and the e-Golf. On the other hand, France and the UK recorded poor results as the leading brands in both countries registered double-digit falls. 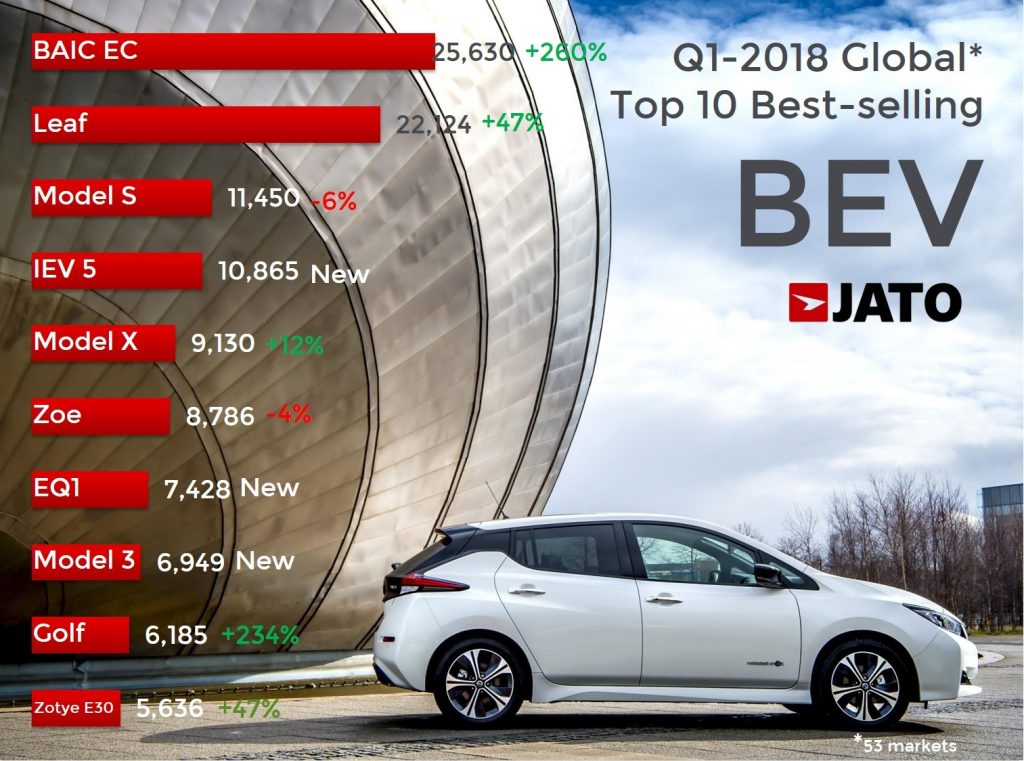 Tesla was the world’s top-selling EV brand, but Renault-Nissan continued to lead the rankings by group. The arrival of the new Tesla Model 3 gave a solid boost to the brand’s sales, selling almost 7,000 units and hitting the top 10 global rankings by model. The BAIC EC was the world’s best-selling electric model – with all of its sales coming from China. 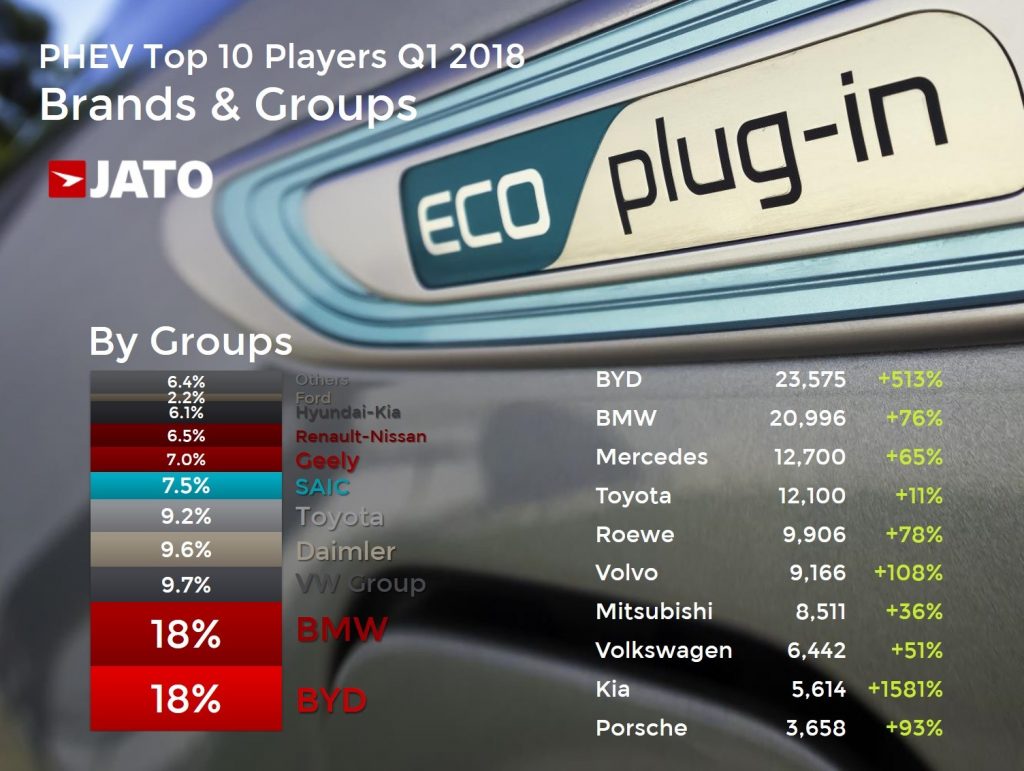 In the case of the EREV, Nissan led the market thanks to its Note and Serena models, which sold 37,600 units between them, and was quite a way ahead of Chevrolet, which came second in the rankings. Finally, the FCEV market composed of only five models: the Toyota Mirai (587 units, down by 2%), Hyundai ix35/Tucson (33 units), Honda Clarity (22 units) and Hyundai Nexo (11 units). 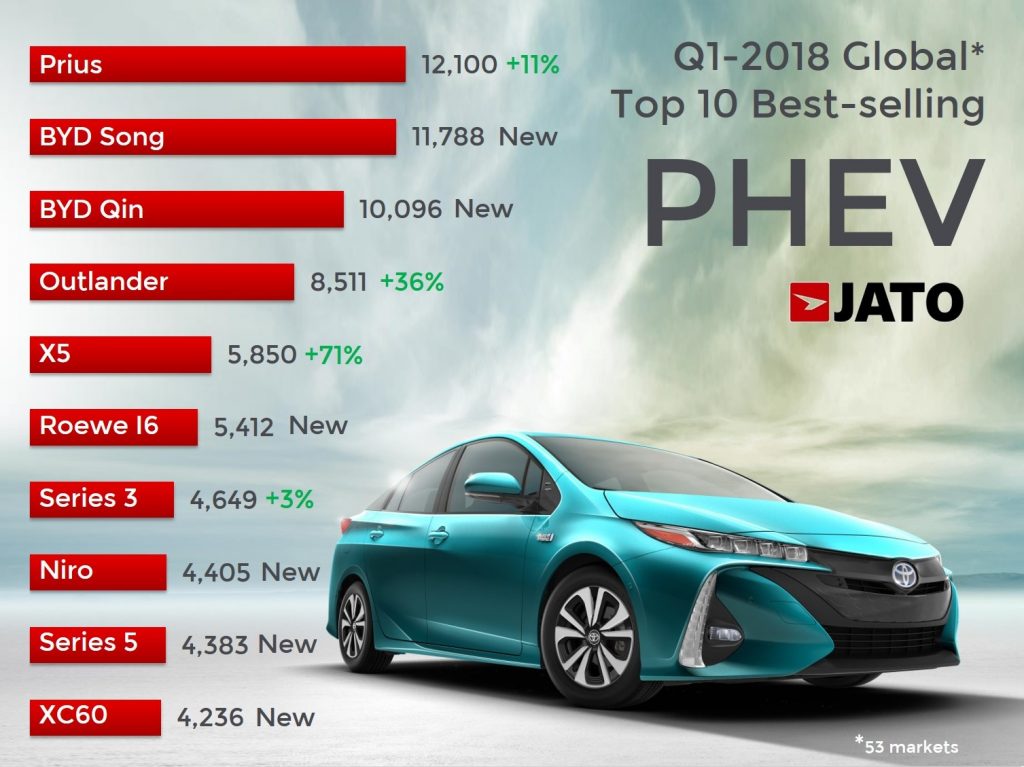 The expansion of AFVs has happened in two main ways: the electrification and the hybridization. Going forward, as is the case in Japan, hybrids are likely to become the dominant AFV in India. This could be to the extent that these two markets could potentially rival the electric solution that is likely to come out on top in China and Europe. It is still unknown what will be the case in the US, but consumer demand can be expected to grow once gasoline prices rise again.