Are we heading to the end of MPVs?

The latest JATO data suggests that European car market continues to post important changes on its composition. Besides the SUV boom, well known by the industry, the other shocking event is the way new MPVs are becoming more unpopular and hard to see in many car makers ranges. What used to be a very popular segment during the first years of this century, has become a boring alternative for the majority of European consumers. 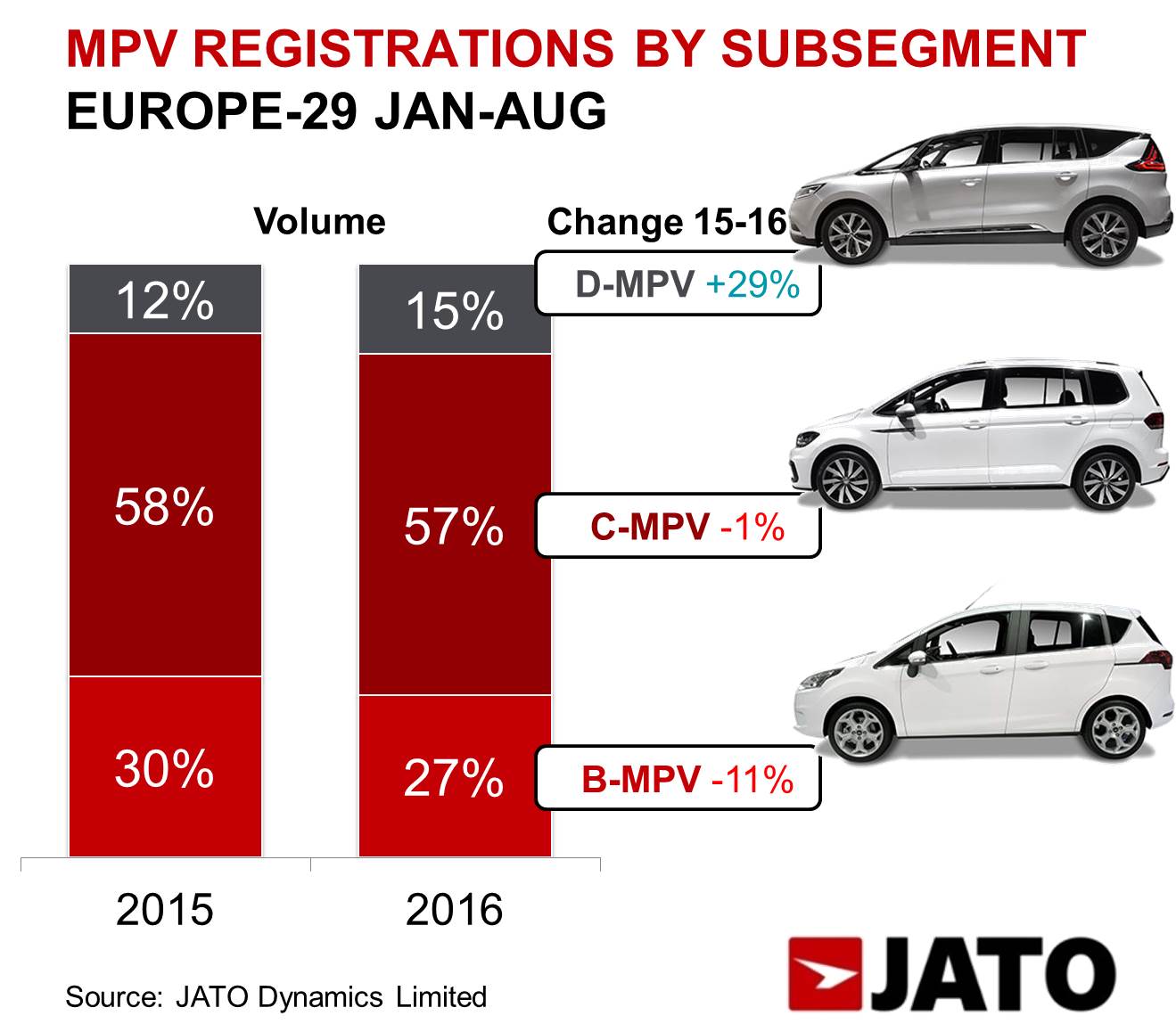 In the year 2000 when the popular first generation Renault Scenic was in the middle of its life cycle, European MPV registrations totaled 1.33 million units (8.70% market share). As the demand started to grow and other car makers joined the segment, by the year 2005 total registrations grew up to 2.57 million units becoming the third largest segment in Europe with a market share of 16.65%. But then in 2007 the SUV/Crossovers started to become a real choice when Nissan launched its new Qashqai. 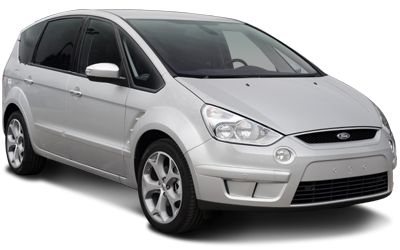 The arrival of this car damaged the popularity of MPVs between 2007 and 2009. However in the year 2010 and 2011 they regained share thanks to the arrival of new players. But things started to complicate again in 2012 when the second wave of SUVs took off. Since then, MPV market share has not stop falling, with 2015 posting the lowest market share level since 2002. The lack of appeal and fresh designs has been the main reason for the shift from MPVs to SUVs. MPVs are not as cool as SUVs.

But this is not only a matter of numbers. Many important car makers are abandoning this segment. Paris Motor Show 2016 was the proof of how MPVs are not in the radars anymore. Peugeot presented two new SUVs and dropped two MPVs: the current 3008 and 5008 MPVs will become SUVs in the coming months. This move leaves the French brand without any MPV in its range. 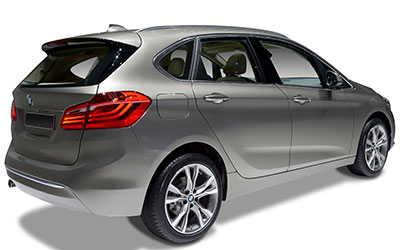 Skoda is another brand to stop making MPVs. After the quiet disappearance of the Roomster, it seems that the new focus of the company is on SUVs and its possible arrival in US car market. Its sister brand SEAT did the same with its compact MPV Altea/Altea XL, which is not available anymore and leaves the brand with only one MPV, the Alhambra. Now Seat’s focus is on its new SUV range with the new Ateca and the coming Arona. Nissan just announced it will stop producing the mini MPV Note due to the arrival of the new generation Micra. According to the Japanese car maker, the new Micra was made larger in order to replace both its predecessor and the Note. In other words Nissan will be out of the European MPV segment too (the Almera Tino was discontinued in 2006). Fiat has also dropped the Freemont big MPV from its offer in Italy, and Mazda does not sell the compact MPV “5” anymore. All of these drops leave the European car market with only 15 brands offering 29 different models. The offer in the year 2005 was composed by 23 brands and 56 models. 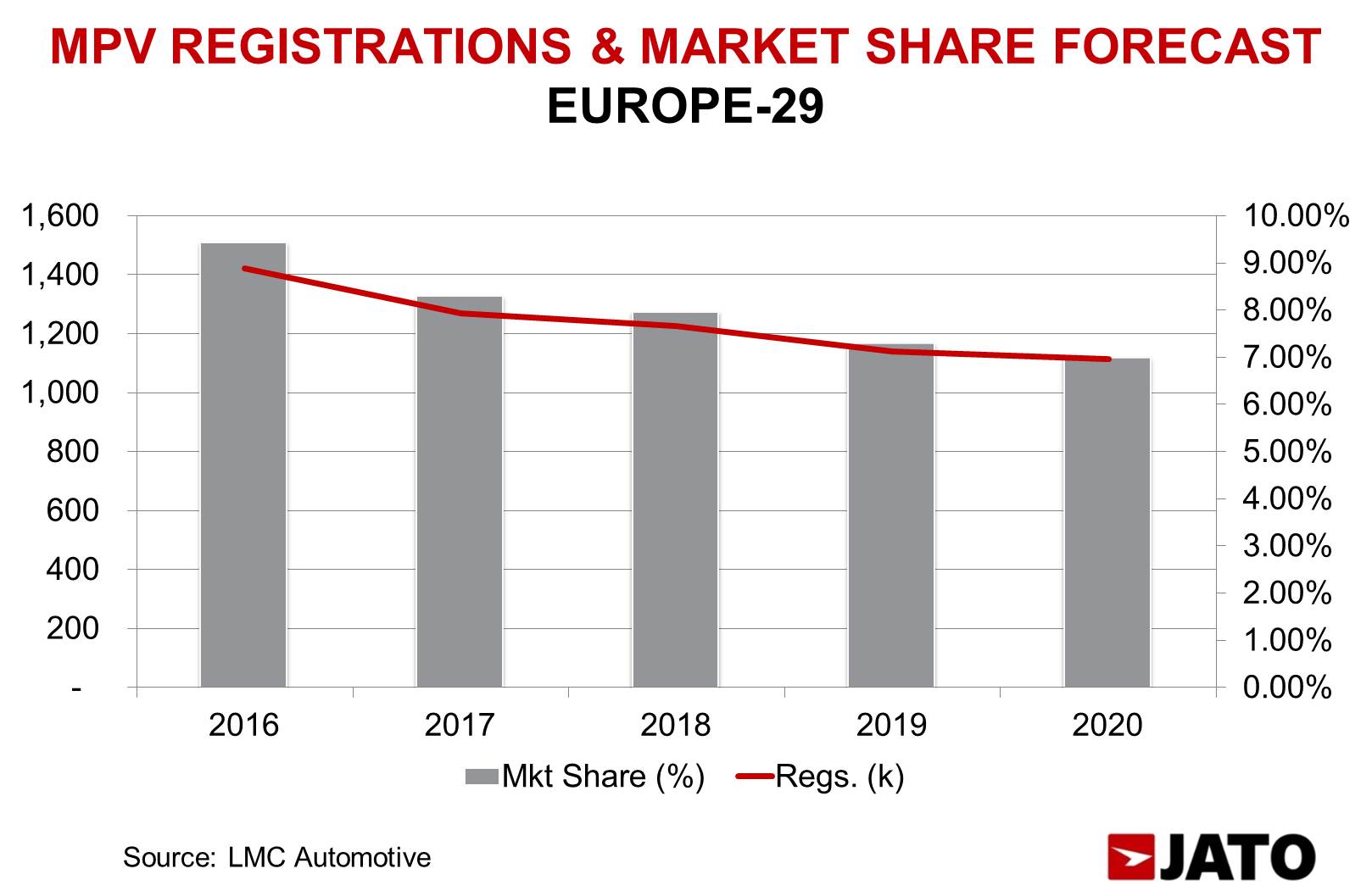 The future does not look promising for MPVs in Europe and a big part of the world. With the exception of Renault, Fiat, Citroen, Ford, Volkswagen, Opel and Mercedes and BMW, most of the car makers will stop investing in this kind of cars. Our forecast partner LMC Automotive forecasts that by the year 2020 the MPVs registrations will count for 7% of total market at 1.11 million units. Are we heading to a market without MPVs?

"It is for sure a good start for the brand in the EV world. However, it is not enough and Ford needs to accelerate… https://t.co/0GdGj31rWK