In 2021, Battery Electric Vehicles made up one in ten new cars registered in Europe

According to JATO Dynamics’ data for 28 European markets,  a total of 1,205,387 pure electric passenger cars were registered in 2021. This is 63% more than the 739,329 units registered in 2020, and 3.4 times higher than the 2019 total. Felipe Munoz, Global Analyst at JATO Dynamics commented: “Over the last 10 years, pure electric cars have grown faster than any other segment, including SUVs which posted a new record last year.”

In 2018, BEVs represented 1.3% of all new passenger cars registered in Europe. This jumped to 2.3% in 2019, and to 6.2% in 2020 during the worst period of the pandemic. Munoz continued: “Due to this rapid growth, EVs now have an established foothold in Europe. And despite the challenges last year, their popularity has continued to grow accounting for 10.3% of the market in 2021.”

The increased popularity of EVs in 2021 was driven by two key factors. Firstly, the continued availability of generous government incentives resulted in an uptick in demand as more consumers began to see the vehicles as a real alternatve to traditional ICE models. And secondly, due to the global shortage of semiconductors, many OEMs priotised EV sales, along with SUVs, over petrol and diesel vehicles meaning dealerships faced less disruption with supply .

Last year, Europe consolidated its position as the world’s second largest market for BEVs both in terms of volume and market share, behind China which saw a 12.3% total market share for these vehicles. Munoz added: “Europe’s results are encouraging given how expensive EVs are when compared to their Chinese counterparts.”*

Tesla up by 70% but VW Group leads

As the European EV offer has grown, so has the competition and Tesla no longer holds such a dominant position within the market. Two years ago, the US manufacturer held a 31% share of the BEV market, thanks largely to the arrival of the Model 3. In 2021, Tesla was the most popular BEV brand with 167,549 units across 28 European markets, however its market share fell to 13.9%.

Munoz commented: “As a relatively new brand within the European market, Tesla continues to attract the attention of consumers. This was also seen with the arrival of the Model Y in Q3 2021, which further boosted Tesla’s growth in Europe.”

In 2021, Volkswagen led the BEV rankings by group, as one in four vehicles belonged to one of the german manufacturer’s six brands. Volkswagen was more than ten points ahead of its closest rival, Stellantis, which took a 14.5% market share, followed by Tesla with 13.9%. Volkswagen Group led in 19 markets; followed by Stellantis in 4; Renault Group in 3; and Tesla and Hyundai in one each. 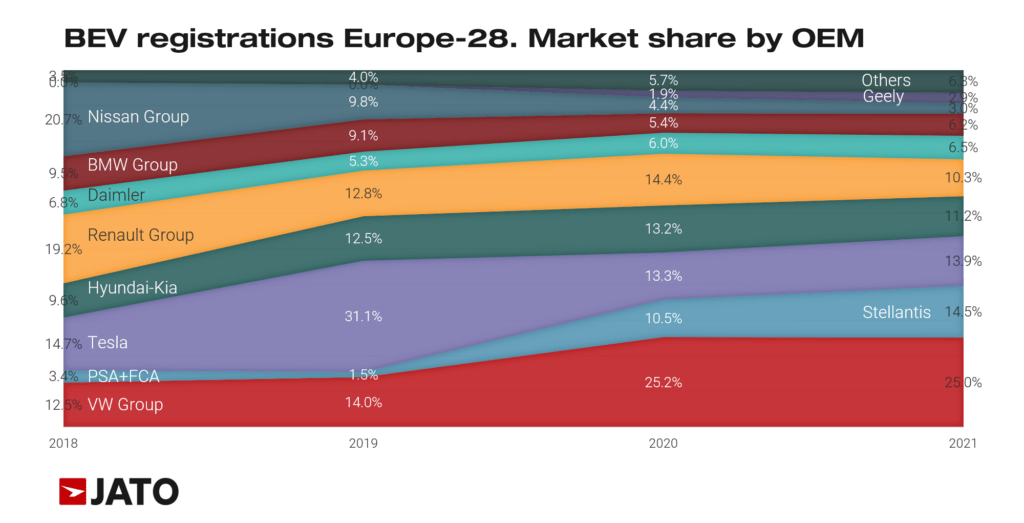 As seen across the ICE market, the expansion of SUV models was one of the biggest drivers for growth in the BEV market. The shift away from traditional ICE models has, until last year, been limited by the lack of choice within the SUV segment. Munoz continued: “It’s clear that consumers around the world want to drive SUVs, whether they are petrol, diesel, or electric”. Last year, OEMs started to deploy their low emission SUV offering, allowing these models to hold almost 40% of total BEV registrations.

Having led the rankings in 2020, the Renault Zoe lost its position as the most registered BEV in Europe to Tesla’s Model 3. The Model 3 topped the BEV rankings in Austria, Belgium, Switzerland, Germany, Spain, France, the UK, Greece, Norway, Portugal, and Poland. However, the Zoe was able to outperform the newer Volkswagen ID.3.