October saw strong growth in the European new car sales market, with sales up by 7.0% compared to the same period last year, according to the latest analysis from JATO Dynamics, the world’s leading provider of automotive intelligence. Growth was again driven by higher demand in Europe’s big 5 markets with sales in Spain up 31.1% year-on-year, Great Britain had double-digit growth of 14.2% year-to-date and Italy up 9.6% year-to-date.

Four of the ‘Big 5’ European car markets registered growth in October, making a significant contribution to the strong overall growth seen during the month. This was the highest rate of overall growth in the European market since March of this year. Germany’s sales grew 3.7%, slightly more than its year-to-date increase of 3.0%. The French market declined 3.8% in October, but remains ahead of 2013 year-to-date by 1.4%.

October was a strong month for new car sales right across Europe, as 24 out of the 29 countries included in the analysis grew their sales compared to the same month last year. The countries that have recently suffered prolonged economic downturn continued their return to growth, with Ireland (+29.8%), and Greece (+21.5%) all showing impressive signs of recovery so far this year. 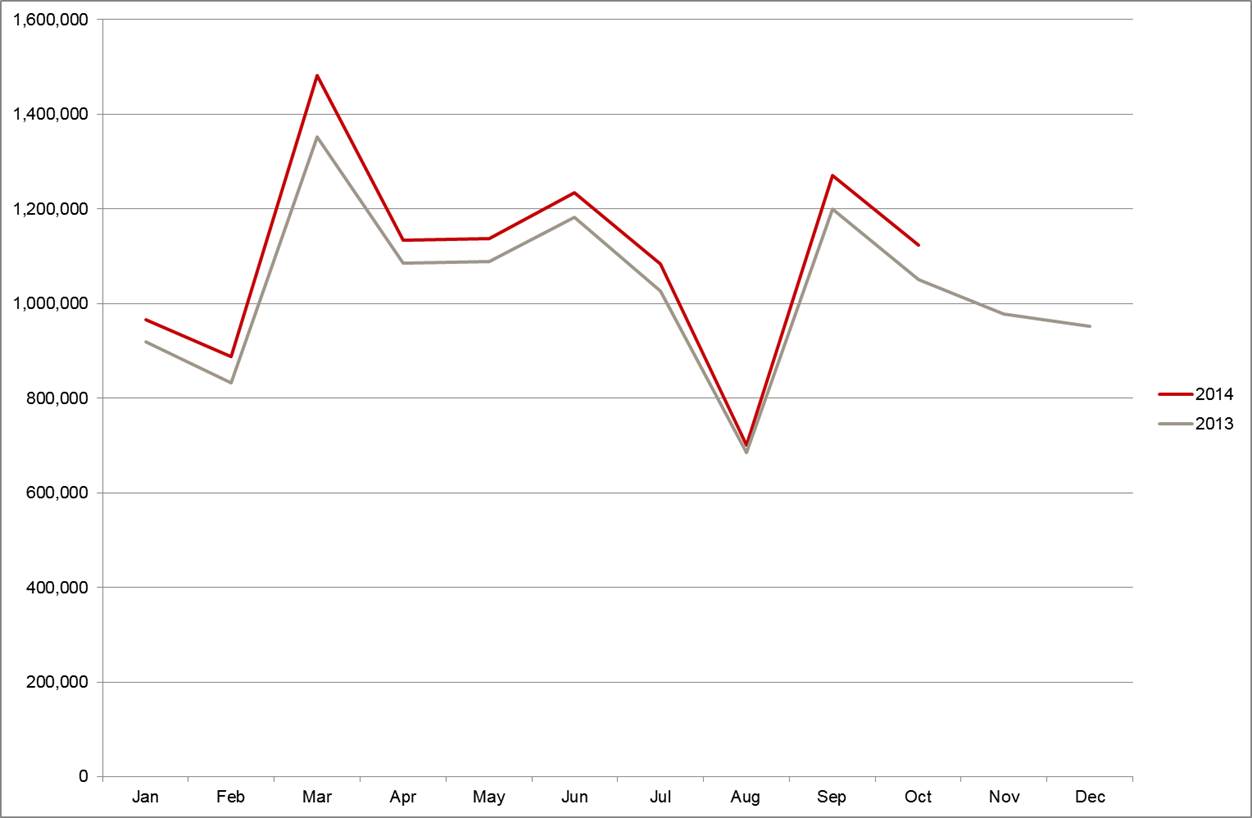 October was also a successful month for the high-volume brands, with 19 of the top 20 increasing year-on-year sales for the month. Of these, Dacia (+34.6%) and Mini (+21.4%) saw the highest year-on-year gains, while Opel/Vauxhall (+11.8%) increased its sales the most of the top 10 brands. Skoda remained in the top 10 for another month after growth of 6.0%, while their year-to-date growth strong currently at 16.3%.

Ford and Renault had similar performances during October, with Ford holding on to second place, beating Renault by just over 1,000 units. Renault’s strong performance in 2014 is proven by its double-digit growth for the year-to-date (+10.2%). Volkswagen remains the top seller thanks to a 5.9% increase in October compared to last year.

The newly facelifted Volkswagen Polo increased year-on-year sales by 27.7%, pushing the model into second place behind its dominant stablemate the Golf, with sales growth of 5.2%. Renault’s Clio was third with a year-on-year increase of 8.1%, while Ford’s Fiesta had to settle for fourth despite growing sales 4.1% compared to the same period last year. Opel/Vauxhall’s Corsa completes the top 5 following a successful month in which its sales increased by 23.1%.

Skoda’s Octavia remains the year-to-date growth leader in the top 10 with sales up 28.4%, despite slipping slightly (1.2%) in October. Peugeot’s 308 saw sales grow by 50.5% compared to October last year while its year-to-date growth is even higher at 59.0%. This leaves the model just outside the top 10, directly behind Peugeot’s 208.

Peugeot’s 2008 also saw October’s year-on-year sales grow by 11.6%, while other small crossover models also continued to gain market share. The most notable increases in year-on-year sales were for Dacia’s Duster (+72.5%) and Renault’s Captur (+9.6%).

Brian Walters, Vice President of Data at JATO Dynamics, commented: “European new car sales not only continued to grow in October, but did so at an even higher rate than in recent months. It was another great month for a number of the biggest brands and more established models, but the continued success of small crossovers shows that demand for innovative new products continues to grow.“