The Volkswagen ID.3 continued to drive registrations in December, becoming the second top-selling car in Europe

The European new car market closed 2020 with further decline. According to data for 27 markets, the volume fell by 3.8% in December 2020 to 1,212,858 units. While this demonstrates a smaller decrease than seen in previous months, this did not offset the overall trend as cumulative registrations for the full year totalled 11,941,633 units, down by 24%.

The last time the industry registered less than 12 million units was in 1993, when volume totalled 11.82 million. Felipe Munoz, global analyst at JATO Dynamics, commented: “While the industry was already showing signs of decline in the last months of 2019, the COVID-19 pandemic has accelerated these existing trends – moving the market into an unprecedented environment, with consumers in lockdown unable to purchase vehicles.”

December’s decline in registrations was driven by double-digit decreases for SUVs in Italy, France and the UK.  Despite strong increases posted by  pure electric  and plug-in hybrid cars, the total market continued to demonstrate decline due to this fall in demand alongside poor results across diesel and petrol car registrations.

Last month, the market share of SUVs decreased when compared with results from December 2019 – the percentage dropping from 41.7% to 40.2%. Registrations totalled 487,560 units, marking a decrease of 7.2%, following an 11% drop across compact SUVs (the largest subsegment). Munoz continued: “Two key factors have contributed to the recent stagnation in SUV growth. Firstly, after several months of continuous growth it was always likely that new SUV registrations would start to level out. Secondly, the new electrification push from governments across Europe has drawn market interest away from SUVs – particularly as there are still very few pure electric SUVs available to buy”.

Demand for gasoline and diesel cars (including hybrids and mild-hybrids)  fell by 23% each, in contrast with a 271% increase in pure electric cars and plug-in hybrids (EVs). These results close the gap between EVs and diesel cars, with EVs registering a 24.1% market share, compared to the 24.7% share seen for  diesel cars. This is particularly significant when compared to December 2019 – when EVs made up only 6.3% of total registrations. 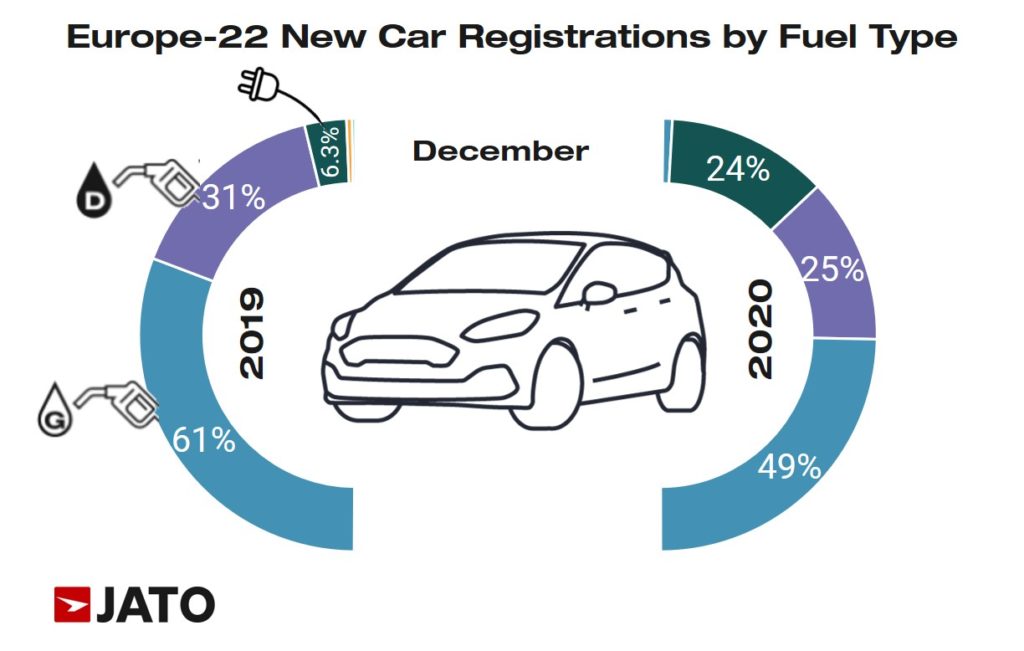 The strong demand for  EVs resulted in two electric models securing places in the top 3 European best-selling cars.  Behind the popular Volkswagen Golf, the Volkswagen ID.3 registered almost 28,000 units and became the second most registered car in Europe, during December. This significant achievement was possible due to positive results posted in the Netherlands, Sweden and Austria – where it led the overall rankings. The ID.3 was Germany’s third best-selling car, the 4th best-selling in the UK, and the 2nd best-seller in Denmark, Norway and Luxembourg. Click here to see the ranking for the full year.

This electric hatchback was followed by the electric Tesla Model 3 in the overall rankings for December. Munoz stated: “Europe is getting ready for an EV revolution and last month’s results are a clear indicator that when these cars have the right price attached to them, they can lure consumer demand away from popular gasoline and diesel models.”