Jan/16: the Fiat Panda outsells the 500 and becomes the best-selling city-car in Europe 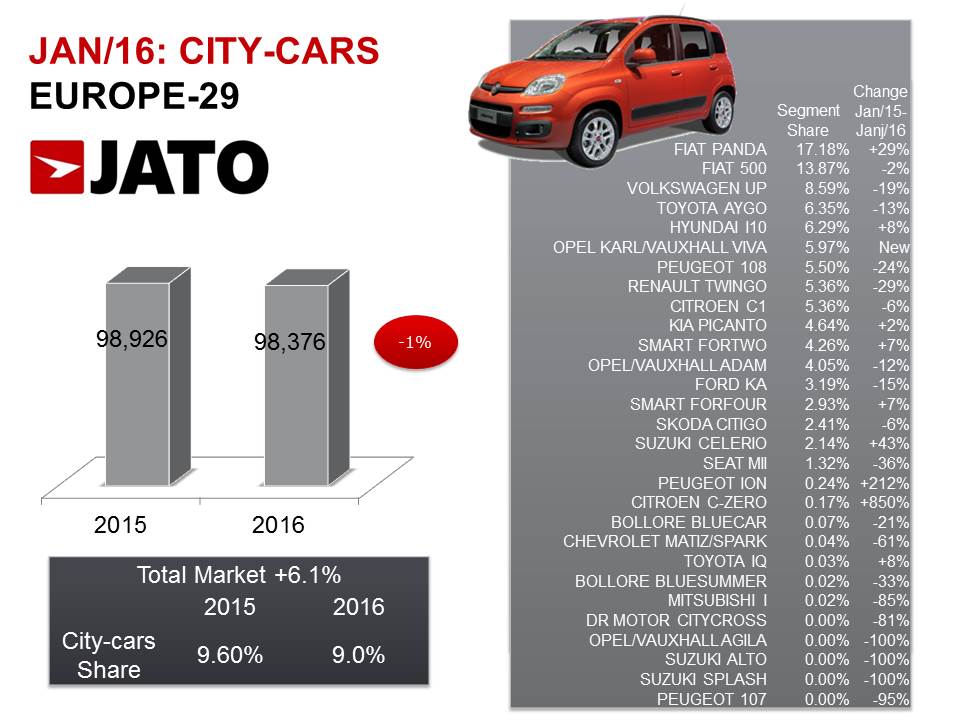 European City-cars registrations remained stalled in January at 98,400 units, losing market share from 9.6% in January 2015 to 9.0% in January 2015. It was the fifth best-selling segment in Europe. As usual Fiat led the segment with 31% share, gaining almost 3 percentage points compared to the same month of last year. The Italian brand benefitted from the increasing demand in its home market thanks to the scrappage program it offered during the whole month. Hence its Panda, the best-selling car in Italy, recorded an outstanding 42% increase. Italian figures represented 79% of the model’s total sales in Europe. Meanwhile the long-standing leader of the segment – the Fiat 500 – posted a negative change (-2%) due to fewer sales in the UK (-33%) and France (-9%). Hence the Panda became Europe’s best-selling city-car during the first month of the year and allowed Fiat to offset the drop registered by the popular 500.

Down the ranking, the Opel/Vauxhall Karl/Viva started the year with 6% segment share at the sixth place get away sales from the VW Up! (-19%) and Toyota Aygo (-13%), and outselling the Renault Twingo (-29%) and the Peugeot 108 (-24%). The Smart Fortwo registrations grew by 7% thanks to the Italian market (+28%), which became its largest, above Germany. There were two clear winners in terms of segment share change: the Karl/Viva and the Panda. On the other hand the Twingo, Up! And 108 registered the biggest share changes drops.