As expected, new car registrations in Europe faced a steady decline in April. Volume fell from 1.34 million units in April 2019 to 292,600 vehicles in April 2020. This represents the lowest monthly level since the 1970’s, and the worst result among the big three markets – China, USA-Canada, and Europe. Europe’s sharp decrease was only outperformed by India (-100%). Year-to-date volume for India was also the lowest result recorded since JATO started to track registration data in 1980. 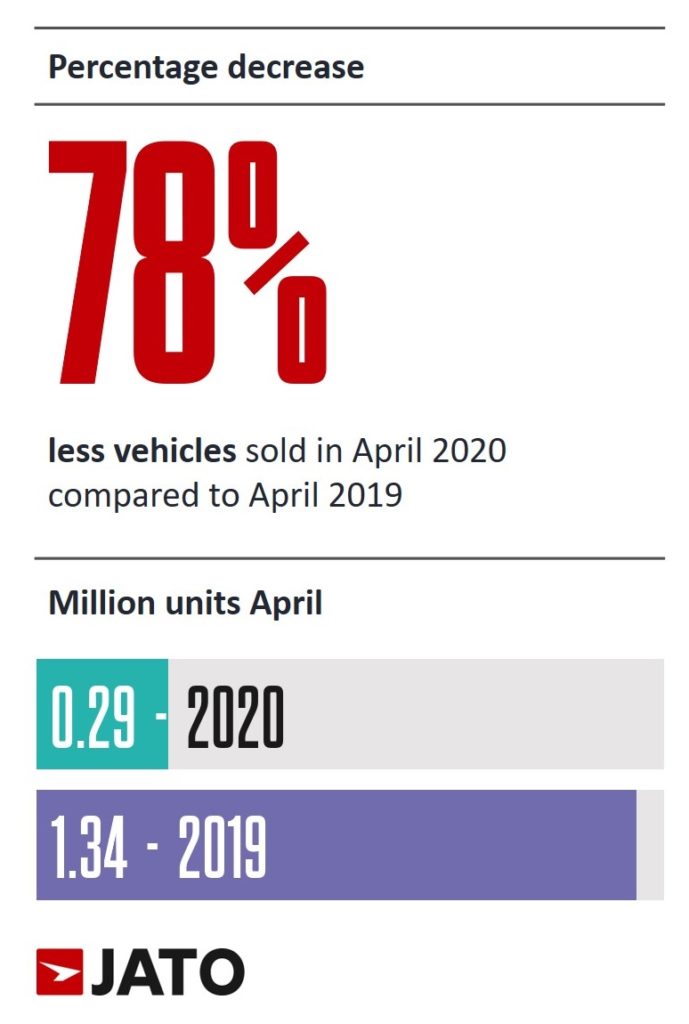 Felipe Munoz, global analyst at JATO Dynamics commented: “Lockdown across the globe contributed significantly to the huge drop in registrations. Not a single OEM was prepared for this scenario or expecting a crisis on such a large scale. The only silver-lining from this turbulence is that it has created an opportunity for automotive players to reassess their operations and become more agile.” As quarantine was not enforced across all countries, registrations fell at different times and different levels. For instance, in Scandinavia, citizens were granted more freedom of movement, thus registrations fell by 37%, the lowest decrease. In contrast, four of the top five markets saw significant declines following strict lockdown restrictions. Combined registrations in Italy, the UK, Spain and France tumbled from 646,000 units in April 2019 to 34,000 one year later.

However, not every aspect of the automotive industry saw a downturn in April. Despite the all-encompassing lockdown that took hold in Q1 and the negative economic indicators, electrified vehicles continued to gain traction. Their registrations totalled 50,400 units, making up 17% of total market share. Demand fell by 46% compared to April 2019 but it was mostly due to the hybrid cars, which saw a decline of 66% to 18,900 units. Pure electric cars registered a decrease of 29% to 16,700 vehicles, while Plug-in hybrids saw almost 14,000 new clients, up by 7%. 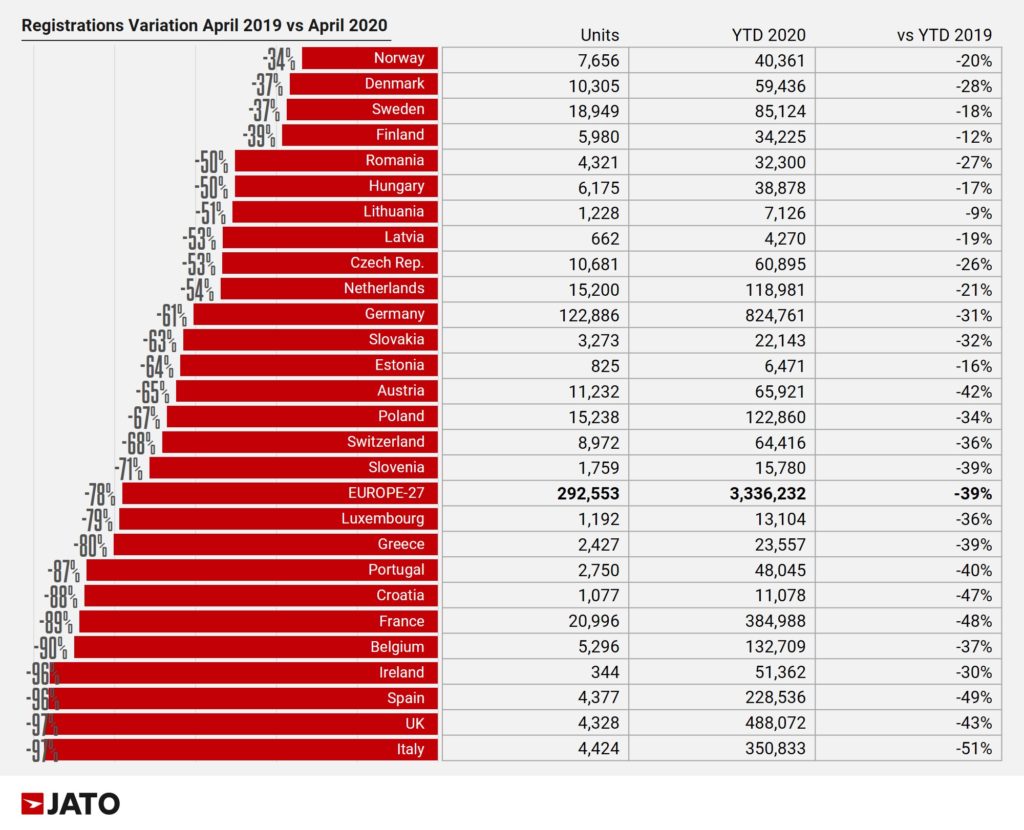 Munoz explained: “EVs were already driving part of the small growth that remained in 2019. This year, as governments have acted quickly to protect their people and economies, EVs have gained even more traction and visibility due to incentives.” Munoz continued: “These cars are likely to become the top choice for consumers seeking private transportation. OEMs who have invested heavily in EVs, are best placed to navigate the tough months ahead.” 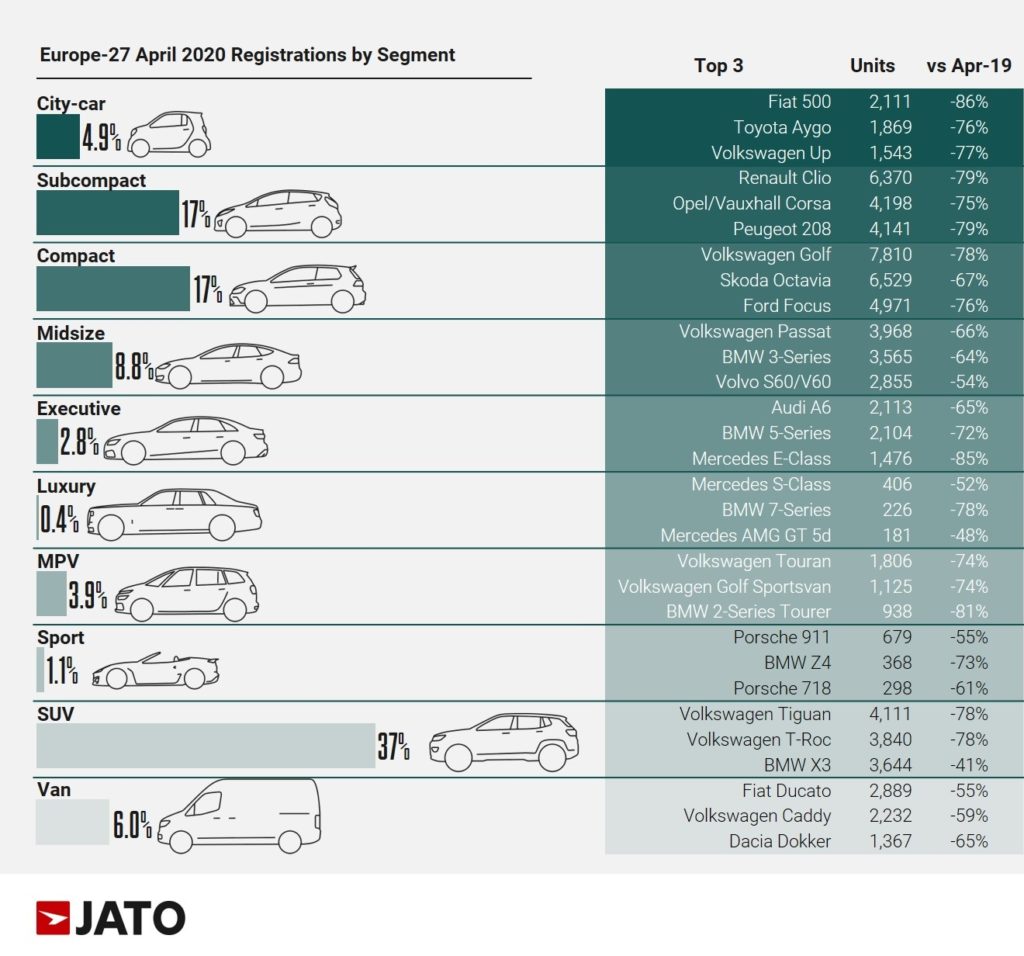