Positive results for the Latin American car market in the first half of this year. Passenger cars and light commercial vehicles sales totaled 2.83 million units in the 9 largest markets in the region, meaning that the volume increased by 7.0%. While the US market stagnates and Europe doesn’t grow as fast as before, Latin America shows very positive signs of recovery and expansion. 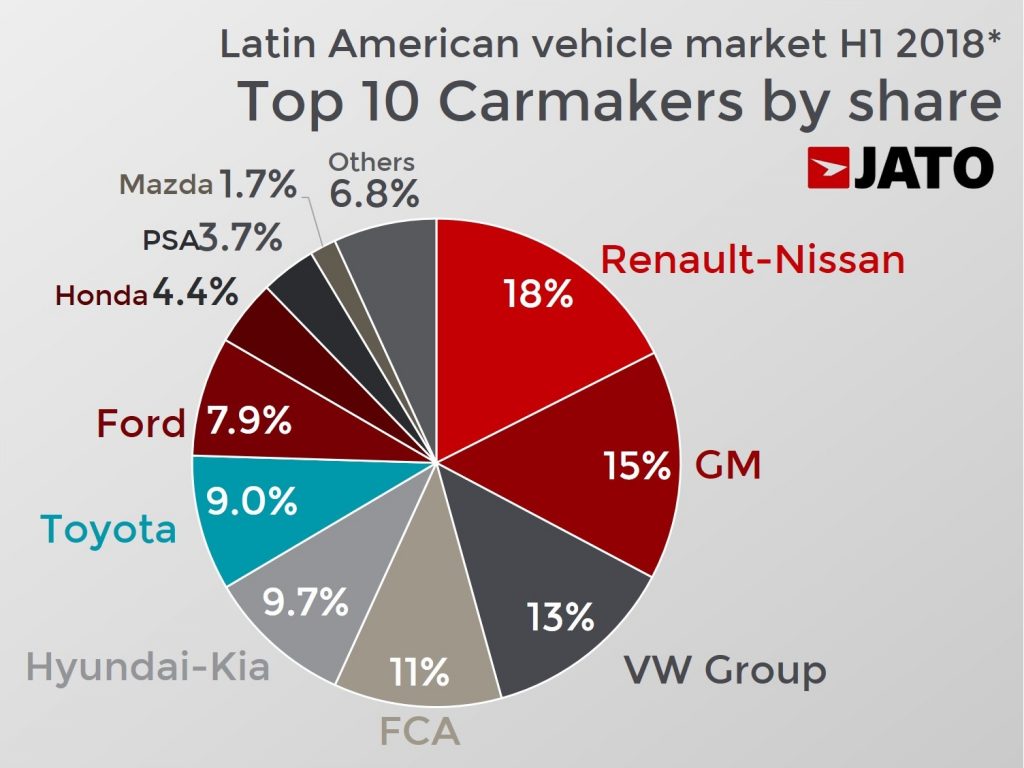 It was the best ever first half in Argentina and Chile, while Brazil showed a strong increase of 13.8%, which was still far from the record in 2013. Mexico posted a decline following the peak reached in H1 2017. Vehicle sales in Colombia and Peru remained stable and improved a bit compared to the first quarter drops. Ecuador shines thanks to a wider offer and cheaper cars as a consequence of the free trade agreement between this country and Colombia and the European Union. 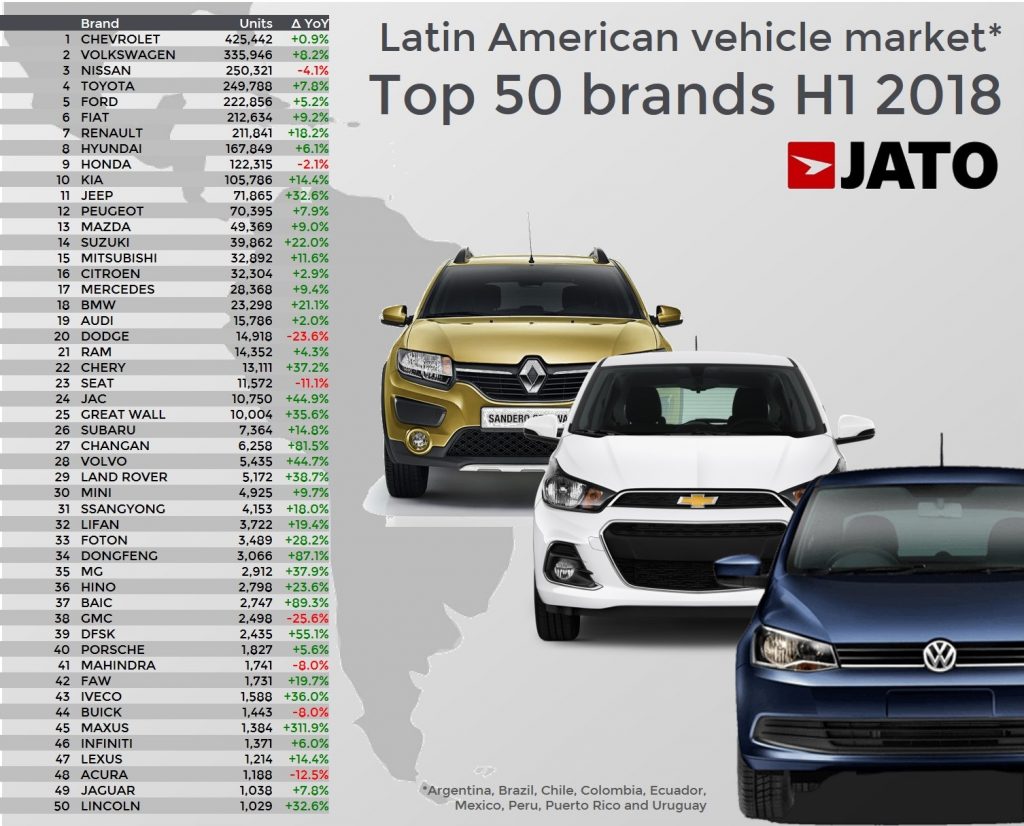 Only one of the brands podium outpaced the market, with Volkswagen up by 8.6% to 11.9% market share against 11.8% in H1 2017. Chevrolet kept the first spot but its volume grew by only 0.9% to 15.1% share (16.0% in H1 2017). Nissan occupied the third position in the brand ranking but lower sales of its Frontier pickup, March, Sentra and X-Trail offset the good performance of the Kicks, the best-selling SUV in the region. 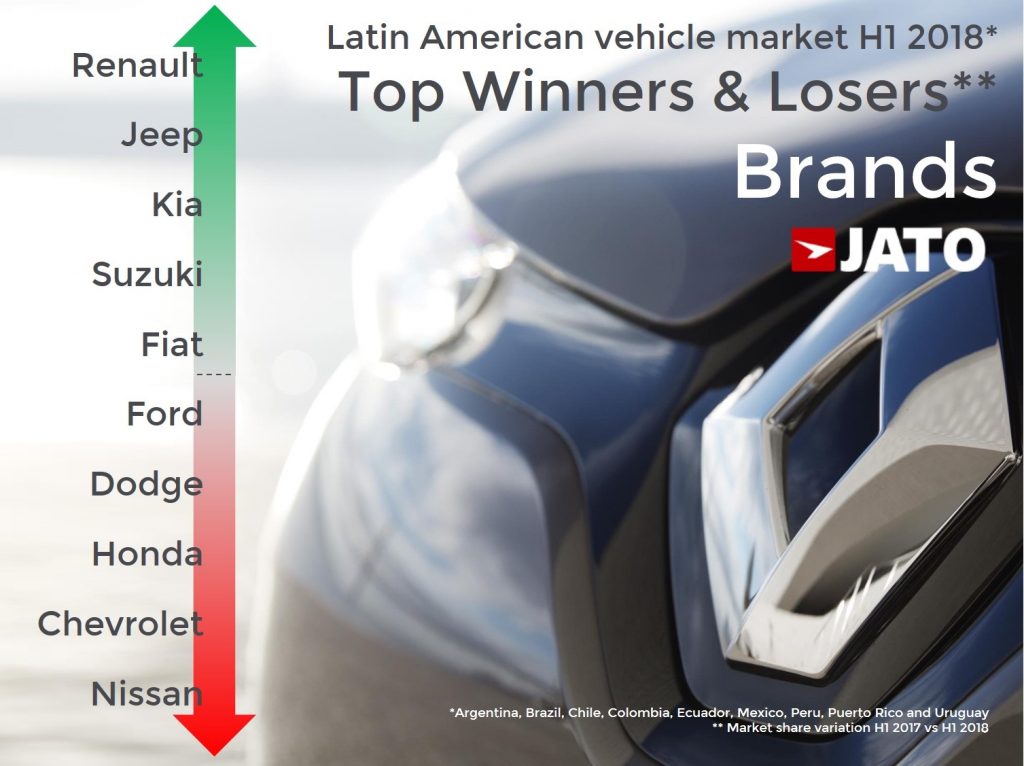 Renault at the 7th position was the biggest market share winner as its sales increased by 18.2% following the successful introduction of the Kwid minicar, the top market share winner. Other good performers include Jeep, whose sales counted for 2.5% of total market boosted by the Compass, the best-selling C-SUV, and the Renegade. Kia gained 0.2 points of share to 3.7%. In contrast, Nissan posted the highest market share lost falling from 9.9% in H1 2017 to 8.9% in H1 2018. Other brands that lost market share were Chevrolet, Honda, Dodge and Ford. 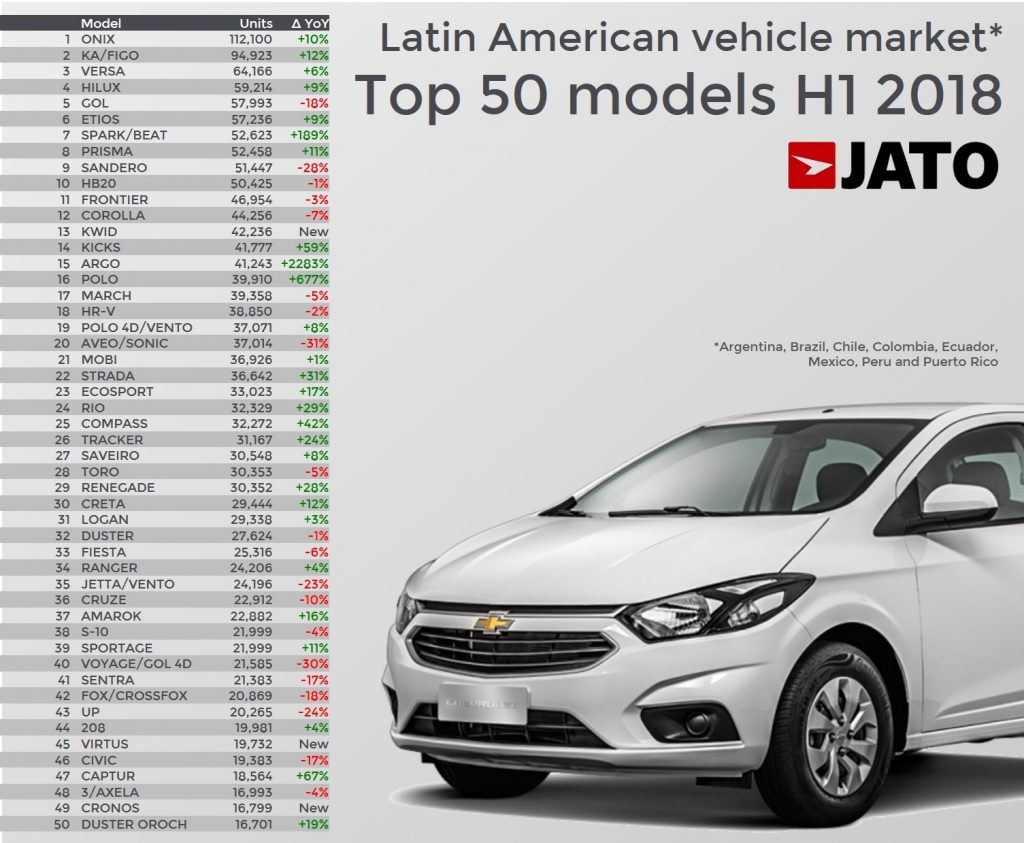 Three subcompacts were in the podium. The Chevrolet Onix is still the region’s top-seller with more than 112,000 units sold. This subcompact is very popular in Brazil where 80% of its volume remained, and is not available in Mexico. The second position didn’t change either and was occupied by the Ford Ka (aka Figo in Mexico), which was also able to outpace total market’s growth. The Renault Sandero fell some positions and wasn’t Latin America’s third best-selling car anymore. This position was now occupied by the Nissan Versa. 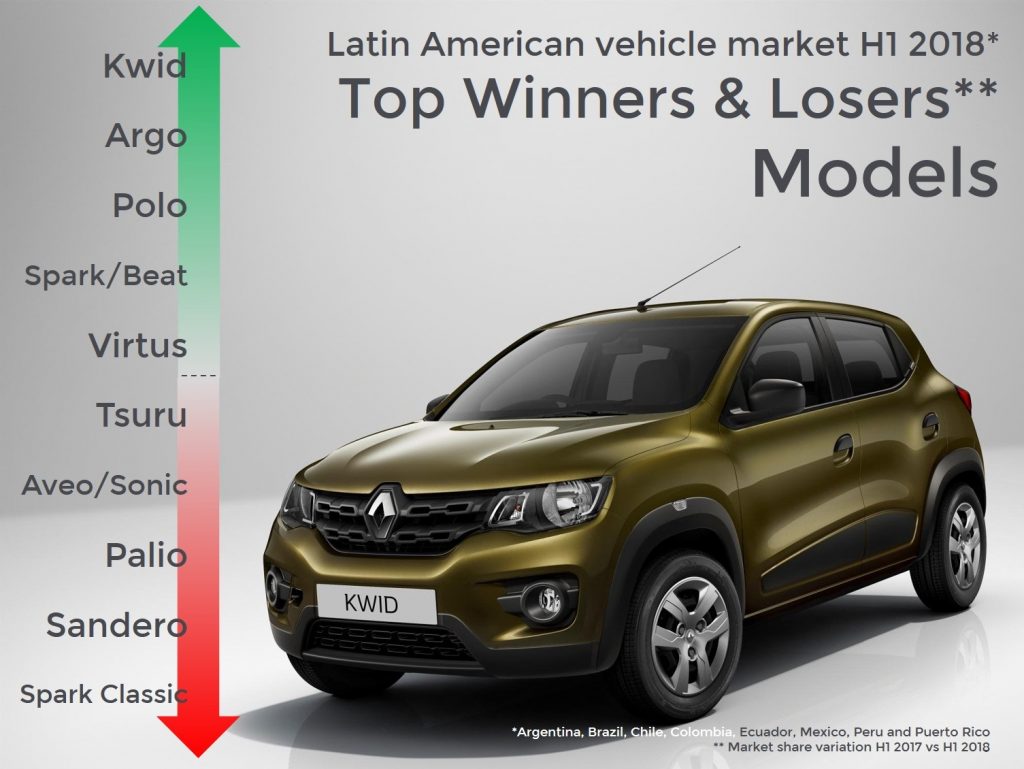 The Renault Kwid was the protagonist of the semester getting close to the top 10 at the 13th position in the ranking. The minicar is the new success in Brazil and Argentina where it already makes part of the top 10. It is due to arrive in other Latin American markets soon.

Other winners of the first half include the Fiat Argo, (top-seller in Argentina in June), the new Volkswagen Polo and Chevrolet Spark/Beat. The Volkswagen Virtus was ahead of the Fiat Cronos, but both were still far from their rival the Chevrolet Prisma.