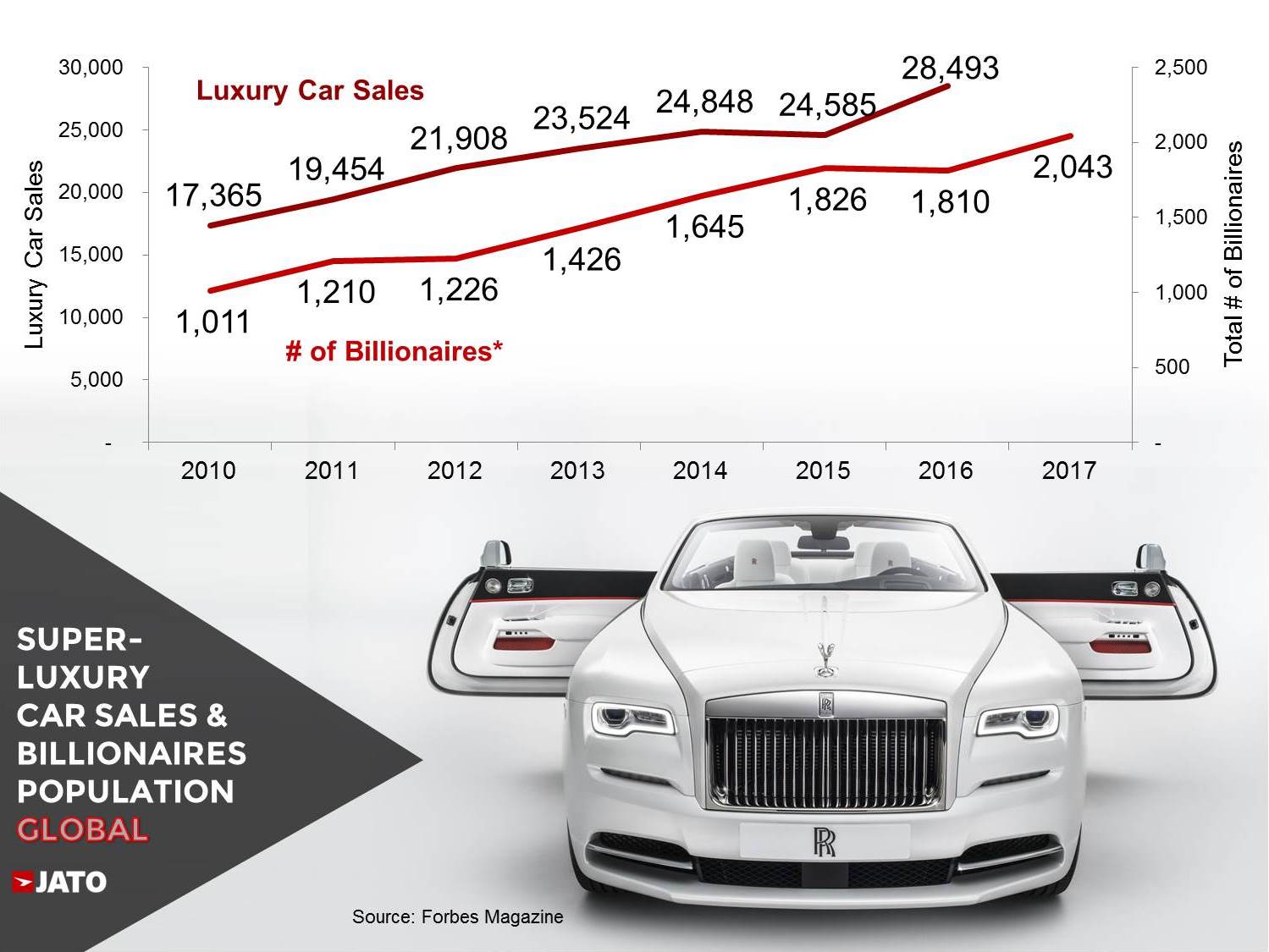 The latest Forbes list of billionaires showed a record year for the richest people on earth. According to the publication, there were 2,043 billionaires arond the world, which is 233 more people or 13% higher than the total number of 2016 list. It is the first time the Forbes list exceeds 2,000 ten-figure-fortunes. In fact the total number of billionaires have doubled since the year 2010. Technology, communications and retail are the main sources of the wealth of the richest people on earth. 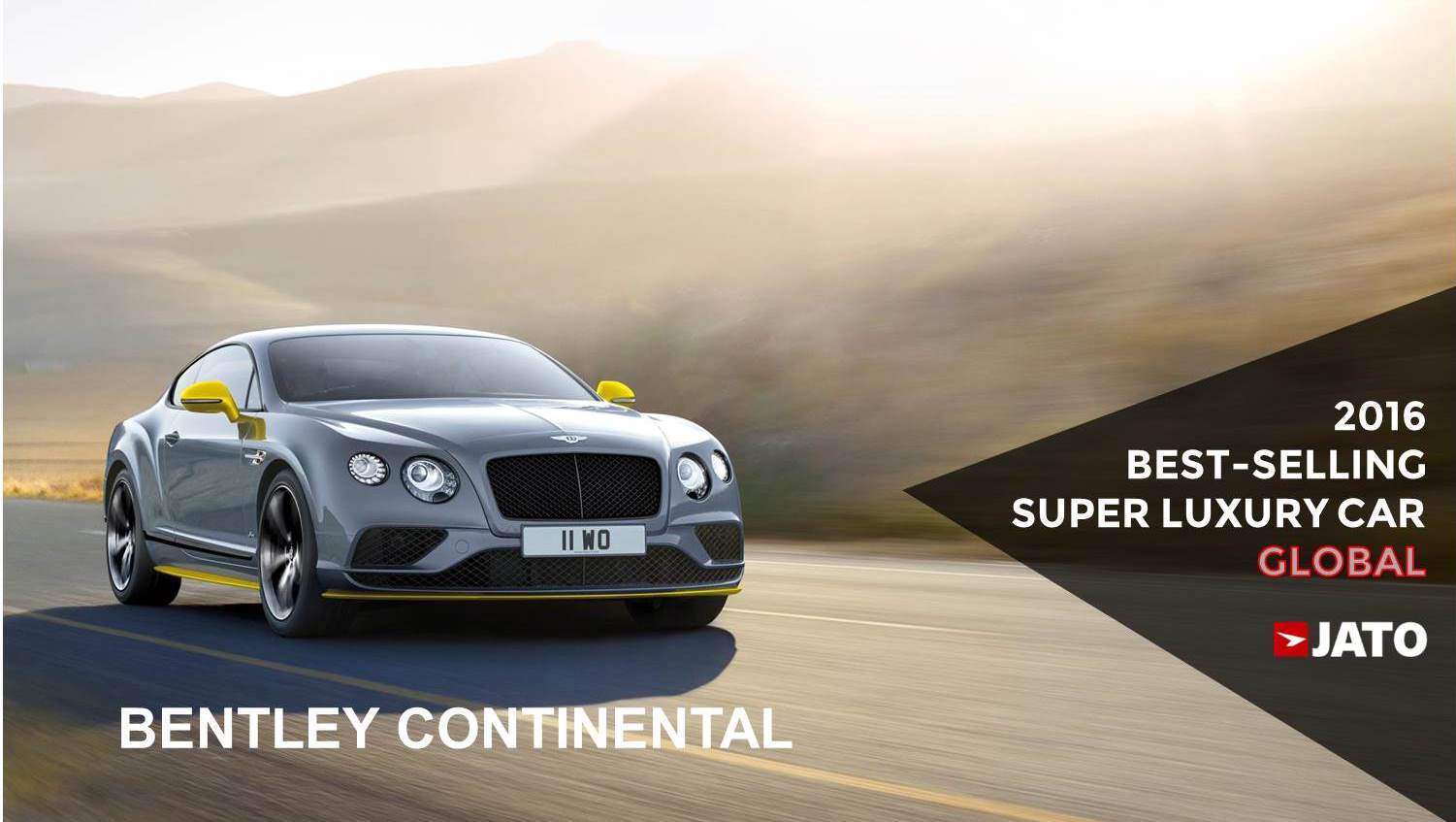 At the same time we’ve seen a strong growth on the ultra-luxury cars demand. Last year their global sales* posted a record of 28,500 units, up by 15.9% compared to 2015 figures. The latest launches, new segments added, and the rapid expansion in markets like China, have made this possible. In fact there is an interesting fact about the Chinese increasing demand. Forbes indicates that mainland China registered the highest number of newcomers to its annual list. 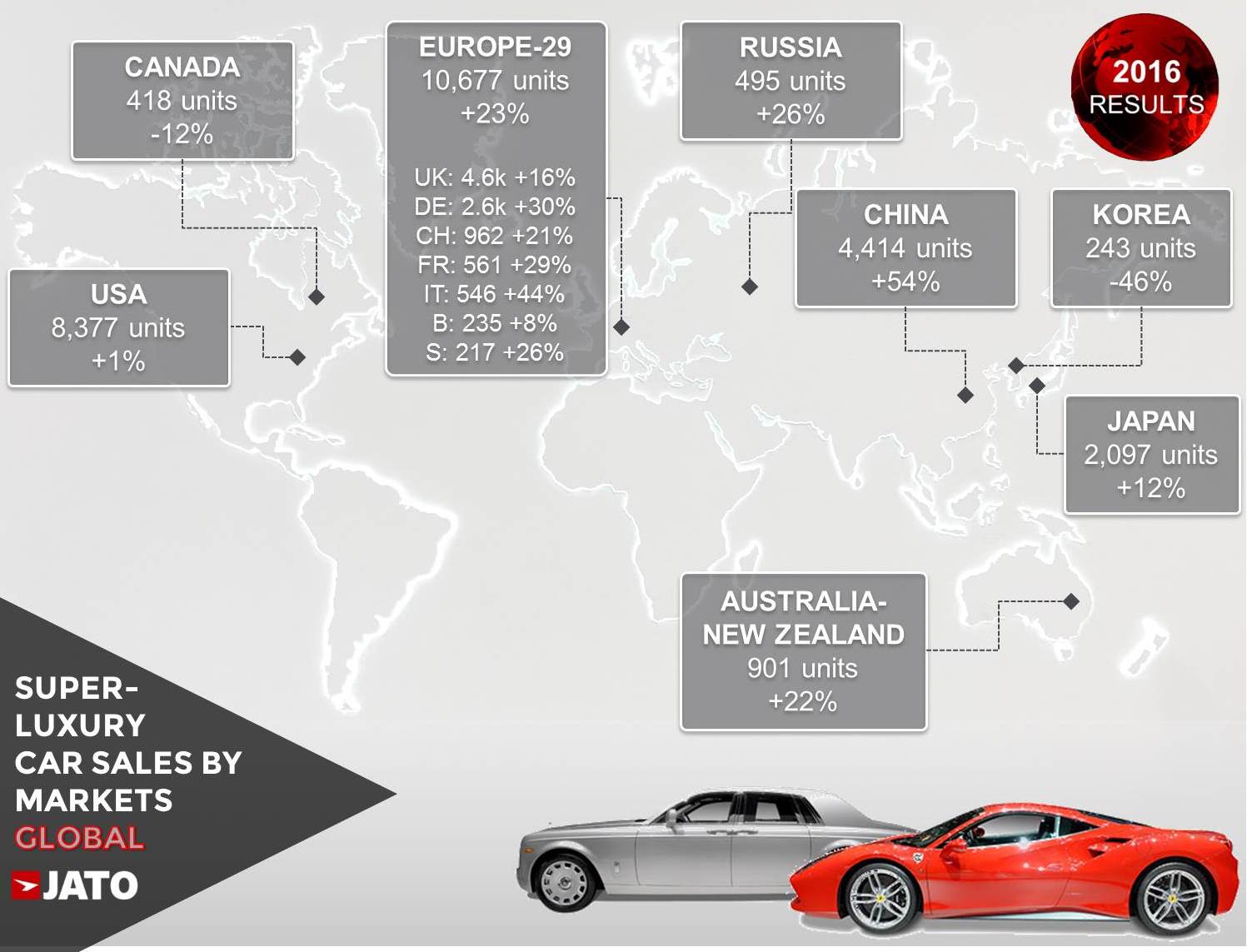 Last year, the US retained its top position as the world’s largest market for ultra-luxury cars. Its volume counted for around 30% of the global total, but sales only grew by 1.1%. In contrast, the UK came second with 4,600 units, up by 15.6%. Despite its double-digit growth, it almost lost its second position to China, where the demand for these cars soared by 54.2% to 4,400 units. The top 5 was again completed by Germany and Japan, both posting double-digit growth. But is this positive trend only related to the fact that there are more rich people? 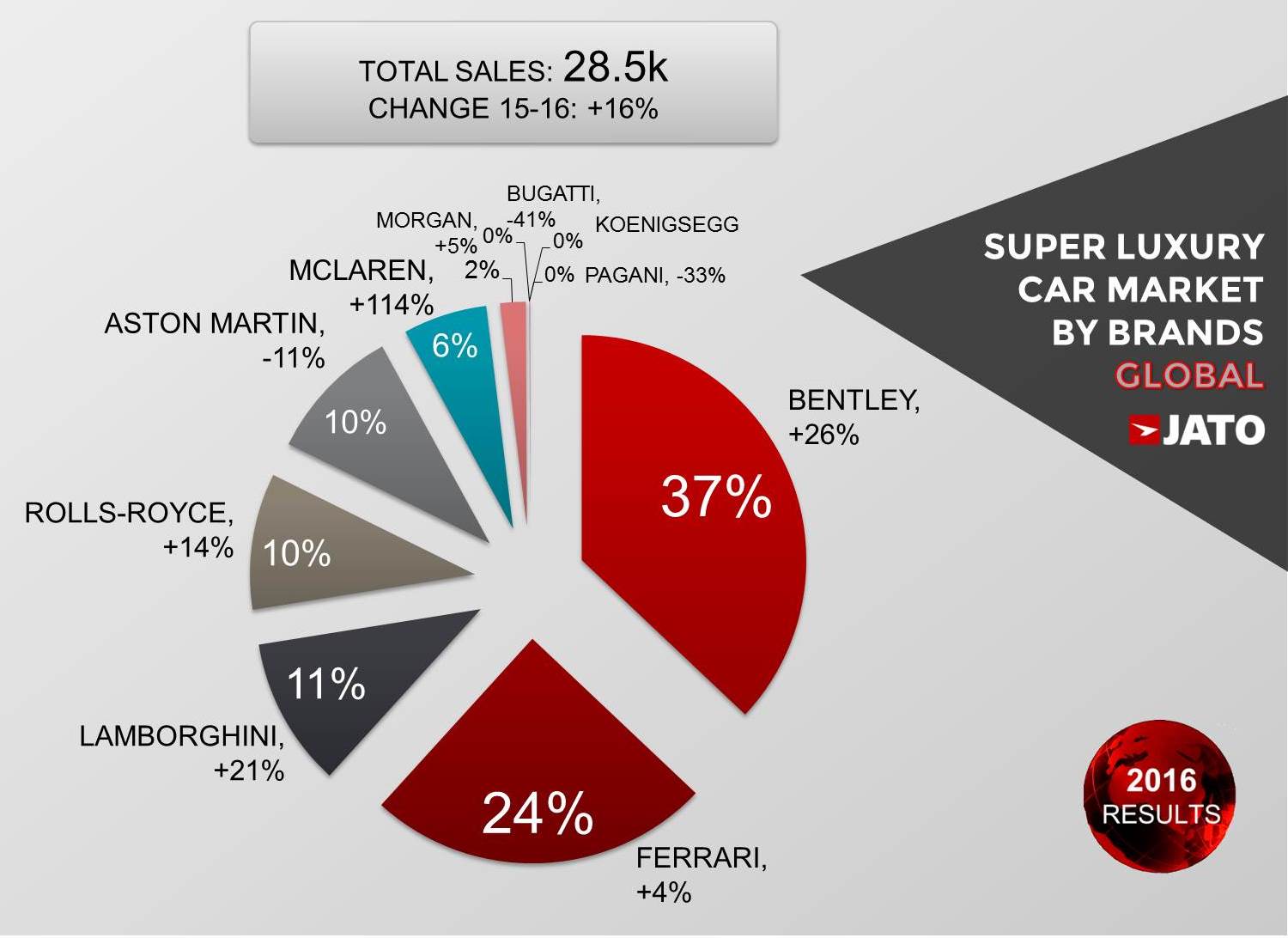 The clients of brands like Bentley, Aston Martin, Bugatti or Ferrari are looking for status but also for the latest features available in the market. They want to be ahead of the rest of mortals when it is about technology, performance and design. The manufacturers are not only providing all of this with better new products but they are also evolving in terms of powertrain and segmentation. Few years ago it was impossible to see a hybrid Ferrari or a SUV from Bentley. Today they both make part of the new age of super/luxury cars, and it is only the starting point. 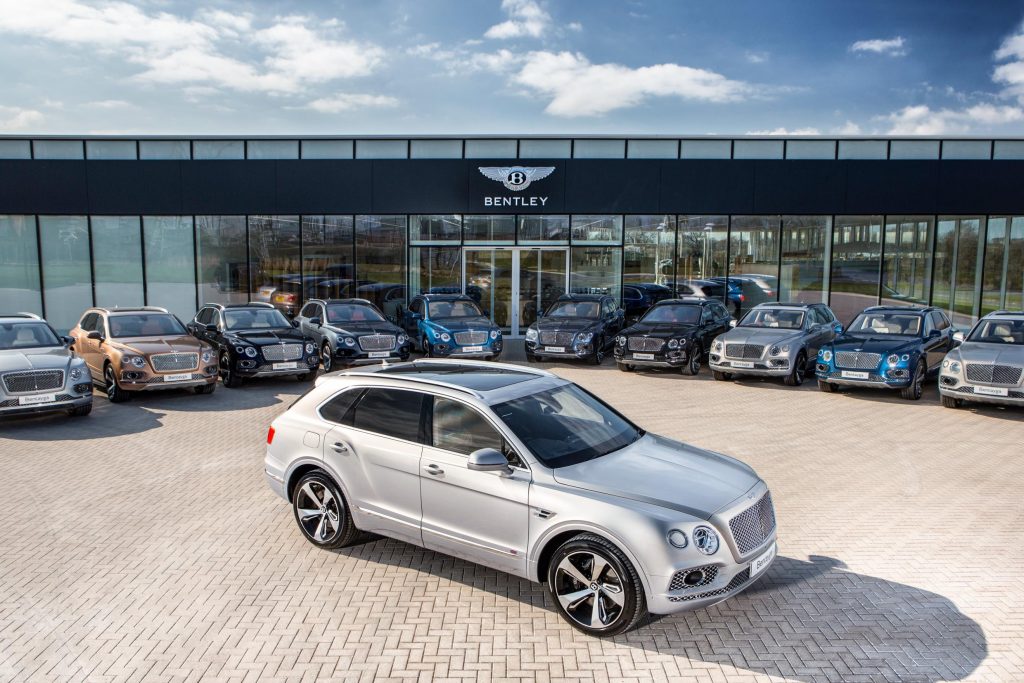 From the 10 brands that make part of this exclusive category, 9 of them have already announced electrification/hybrid plans. McLaren aims the hybrids to become more than half of its cars by 2022. Bentley has just presented the EXP 12 Speed 6e Concept full-electric car. Lamborghini’s CEO considers electrification as “an area of great attention” for them. Meanwhile Rolls-Royce is considering a plug-in hybrid version for its first SUV, to hit the market shortly. The next generation Aston Martin Rapide may go all-electric, and Ferarri’s boss Sergio Marchionne said in Geneva this year that the production hybrid cars could arrive quickly. 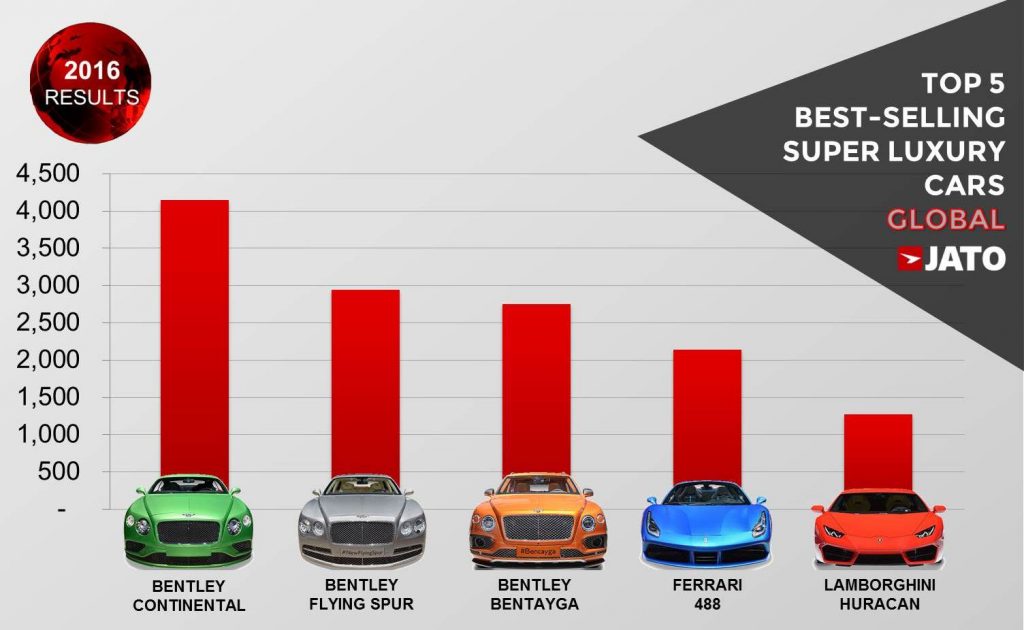 The increasing demand is also explained by the fact that this segment has also joined the SUV boom. As it is the main driver of growth in the majority of global markets, brands like Bentley decided to introduce their own idea of how a luxury SUV should be. The Bentley Bentayga started its first year in the market with more than 2,700 units sold in 2016, becoming the world’s third best-selling luxury car, and counting for more than one quarter of Bentley’s global sales. It won’t be alone. Rolls-Royce and Lamborghini are already working on their SUVs that should be revealed in the coming 2 years. Therefore, the conditions are set to see further growth in the coming years, with more billionaires driving a new kind of super cars.