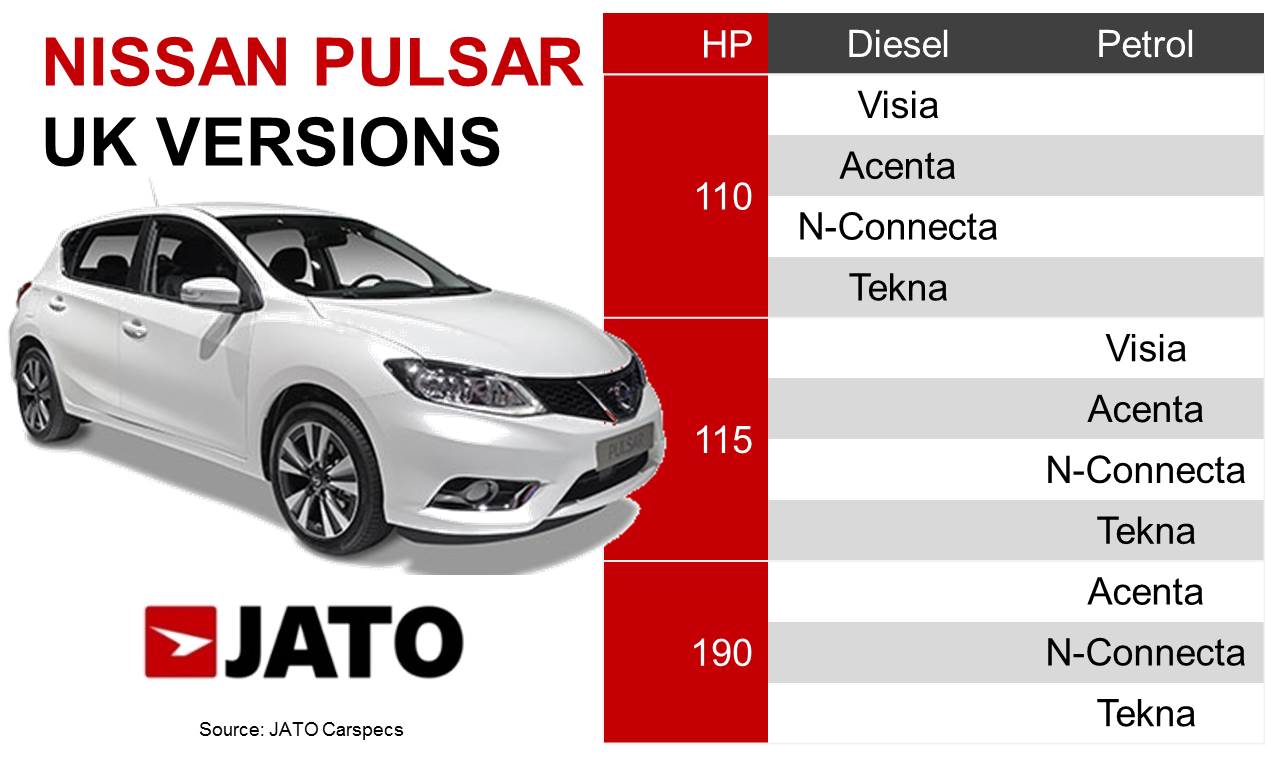 Three years ago when Nissan was preparing the presentation of its Pulsar compact hatchback, its executives said that the brand needed this product to keep growing in global markets. Andy Palmer, who was Nissan’s senior vice president by that time, and current Aston Martin’s CEO, said that the project intended to help Nissan to achieve its goal of becoming a player in 90% of the world’s markets and increasing its global market share. The Japanese brand wanted to have a real rival to the VW Golf, and months later it introduced the Pulsar. After two years of its introduction, the Nissan Pulsar faces challenging times that are not necessarily related to its direct rivals. 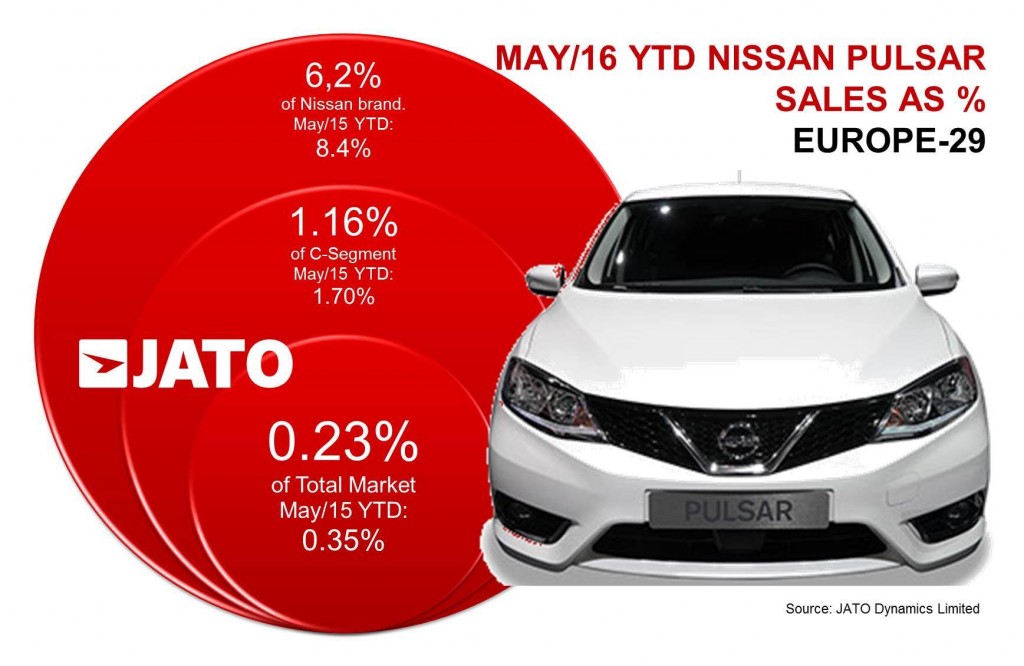 Nissan has sold 67,000 units of the Pulsar in Europe since its introduction in the third quarter of 2014 through May 2016. May 2016 YTD figures show that the brand sold 15,400 units, down 26%. The Pulsar occupied the 21st position in the compact segment and was quite far from the 223k units sold by the VW Golf, and even behind its Japanese rivals: Toyota Auris (58,500 units), Honda Civic (20,800 units) and Mazda3 (19,600 units). Competition in C-Segment can be quite hard especially when a big part of the consumers are quite conservatives and don’t ever change of model. However the biggest challenge the Pulsar faces comes from home as the Nissan Qashqai’s popularity and rising of compact SUVs may be grabbing the attention of many of the Pulsar potential buyers. 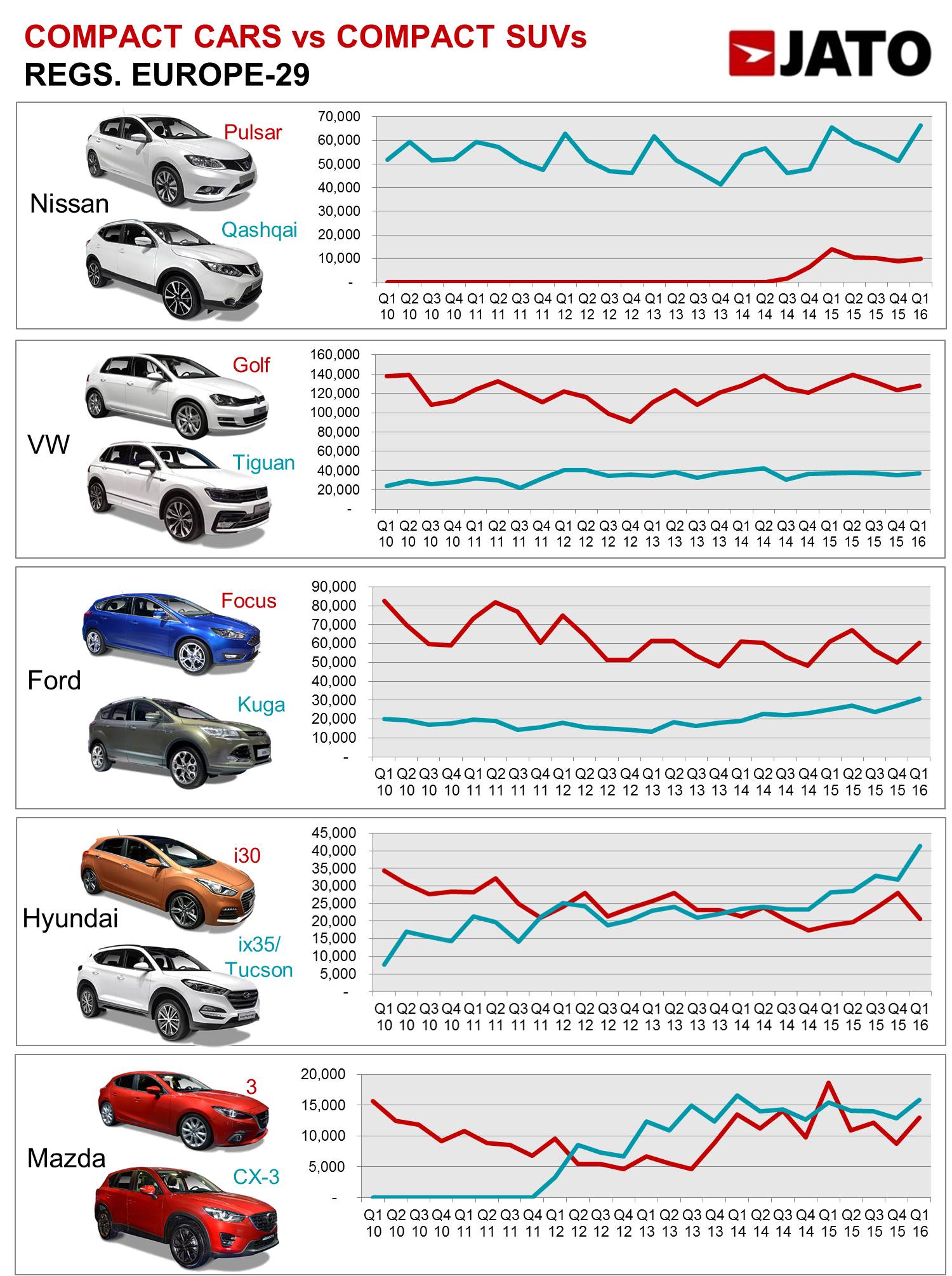 The Qashqai is Europe’s best-selling SUV/Crossover and is the best example of how compact SUVs have a negative effect on sales of regular compact cars. Its registrations in Europe during Jan-May totaled 103,600 units, or almost seven times more than the Pulsar’s. Both cars are based on the CMF platform and are relatively the same age. But there are three things that favors the Qashqai and don’t help the Pulsar. Even if it is a subjective matter, the design plays an important role as the Qashqai features the SUV appealing whereas the Pulsar looks more like the traditional family hatchback. In terms of engines choices, the Pulsar features three different engines (one diesel and two petrol) against eight for the Qashqai (four and four)*. 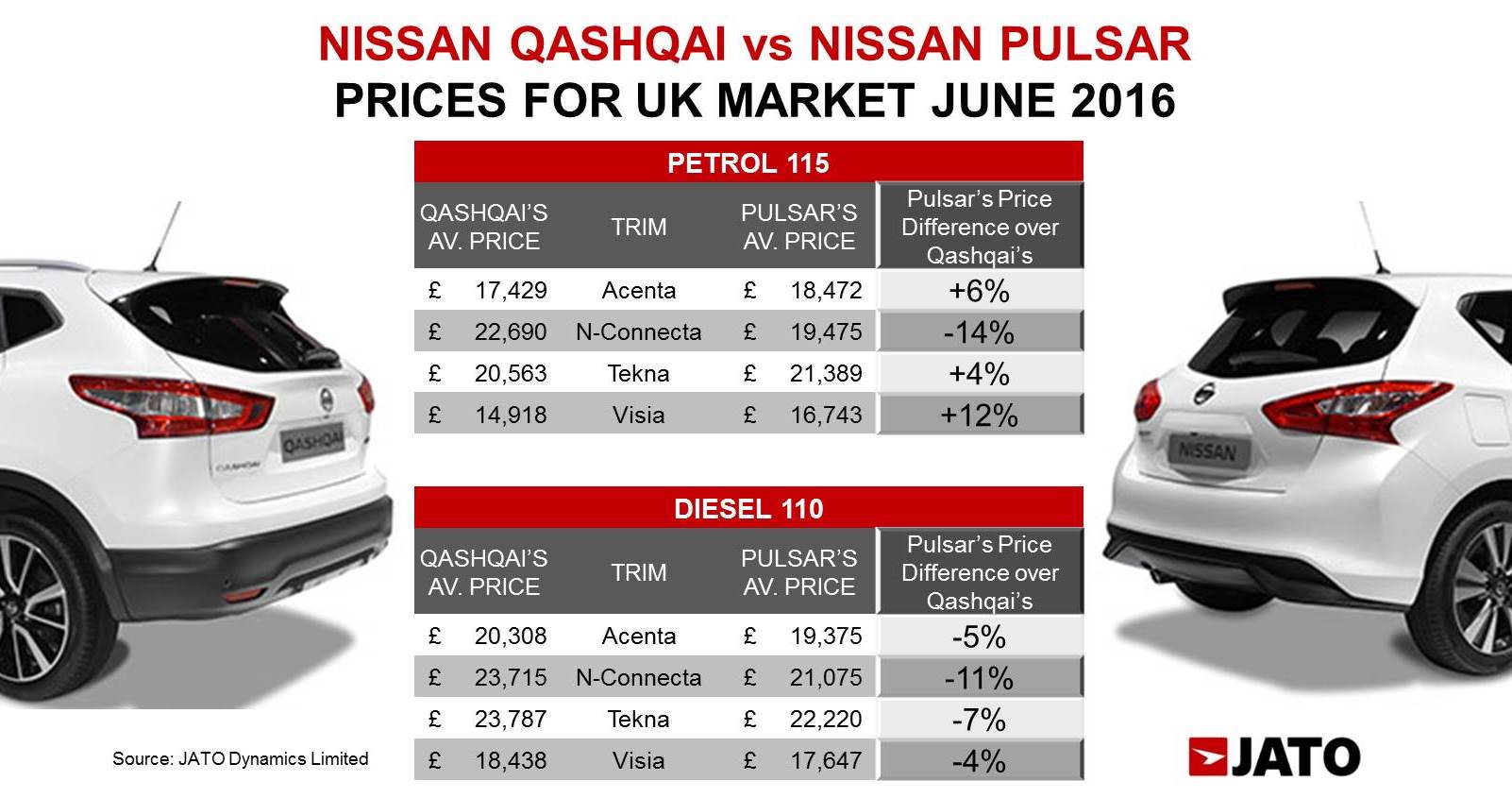 Finally there is also the pricing, which seems to be another issue that plays against the Pulsar. The UK** current price list shows that the Qashqai’s average price of all trims powered by the 110 hp diesel is only 4% more expensive than the equivalent average for the Pulsar. The 115 hp petrol engine average price was 1% higher for the Pulsar. At the same time, the Qashqai is also proposed with a 106 hp diesel engine priced at £15,800 in its basic configuration (Visia trim), which is definitely lower than the Pulsar’s cheapest trim, Visia 110 hp diesel at £17,650.

At the end it is not that difficult for a Nissan potential buyer to decide.

*Number of engines available in the UK