Ford announcement proves sedans are another victim of the SUV boom

In what was one of the biggest announcements in the car industry this year, Ford has revealed it is preparing to axe traditional sedans from its North American line-up. This marks a break from tradition, as sedans were previously Ford’s most popular body type and the US its biggest market for them.

But the announcement was no surprise. In 2017 Fiat Chrysler decided to stop producing two of its latest sedans, Chrysler 200 and Dodge Dart, following poor sales. In the last five years, consumers in the US have been rapidly shifting away from sedans and towards more appealing SUVs. The introduction of lighter and more fuel-efficient SUVs has led to huge demand for the segment. 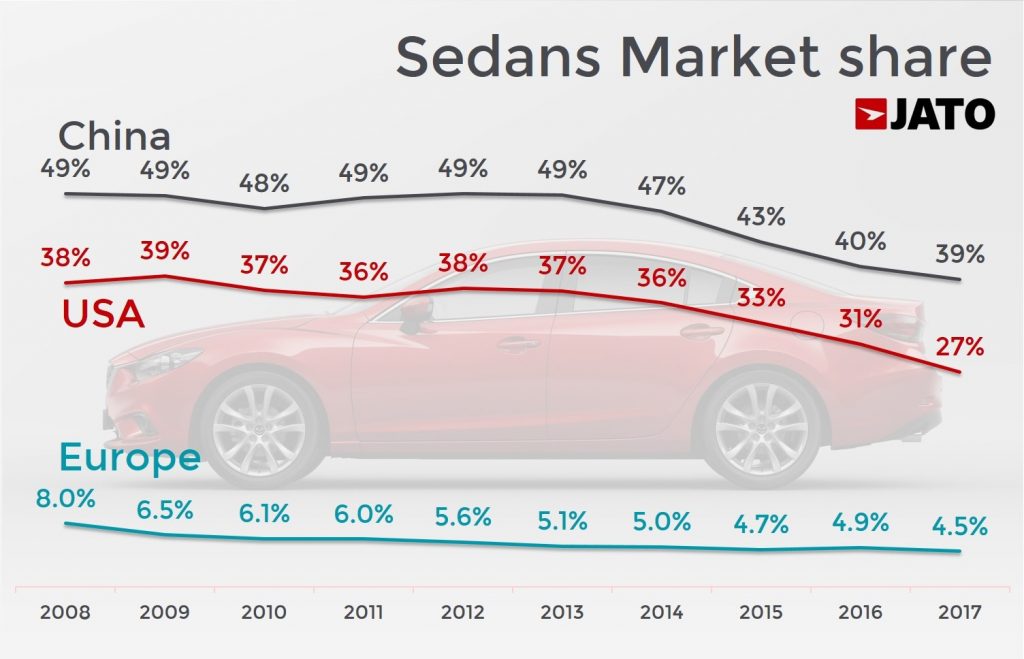 Despite overall demand for cars in the US having grown, with 13.2 million units sold in 2008 and 17.2 million sold last year, demand for sedans has stalled. In 2009, sedans posted an impressive market share of 39% – 12 points higher than the share held by SUVs. But last year sedans registered their lowest market share since 2001 at 27%. Simultaneously, the popularity of SUV has boomed – jumping from a 25% market share in 2008 to 41% in 2017. It simply comes down to the fact that consumers want SUVs and car makers can equip them with better features than regular sedans. 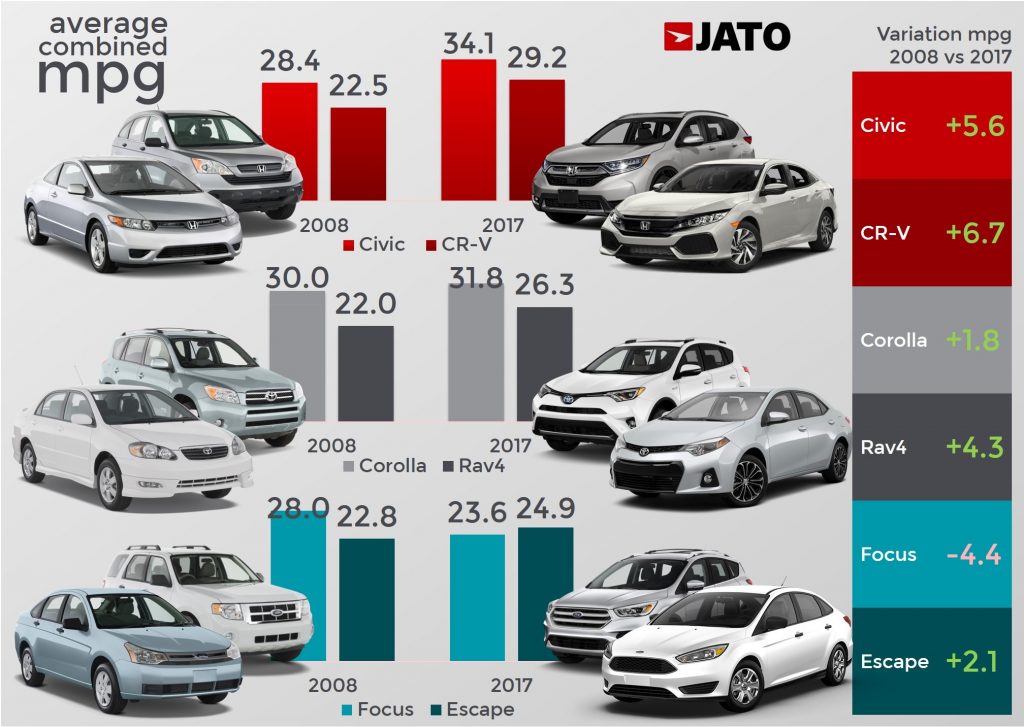 Case in point: many small and compact SUVs have become more fuel-efficient than traditional sedans. In 2008 the average combined consumption of a Ford Focus was 28 mpg against 22.8 mpg for the Ford Escape. The 2017 models showed that the Focus recorded an average of 23.6 mpg, while the Escape outperformed the sedan with an average of 24.9 mpg.

The 2008 Toyota Corolla model registered an average of 30 mpg against 22 mpg for the Toyota Rav4. Nine years later, the newer generations have helped to improve the average by 1.8 mpg in the case of the Corolla and 4.3 mpg in the case of the Rav4. This proves that SUVs are closing the gap on sedans in terms of fuel efficiency. Even smaller SUVs are beating the subcompacts. The Honda HR-V has an average combined consumption of 29.5 mpg, which is better than Chevrolet Sonic’s at 29.3 mpg, and very close to Ford Fiesta’s at 29.6 mpg. 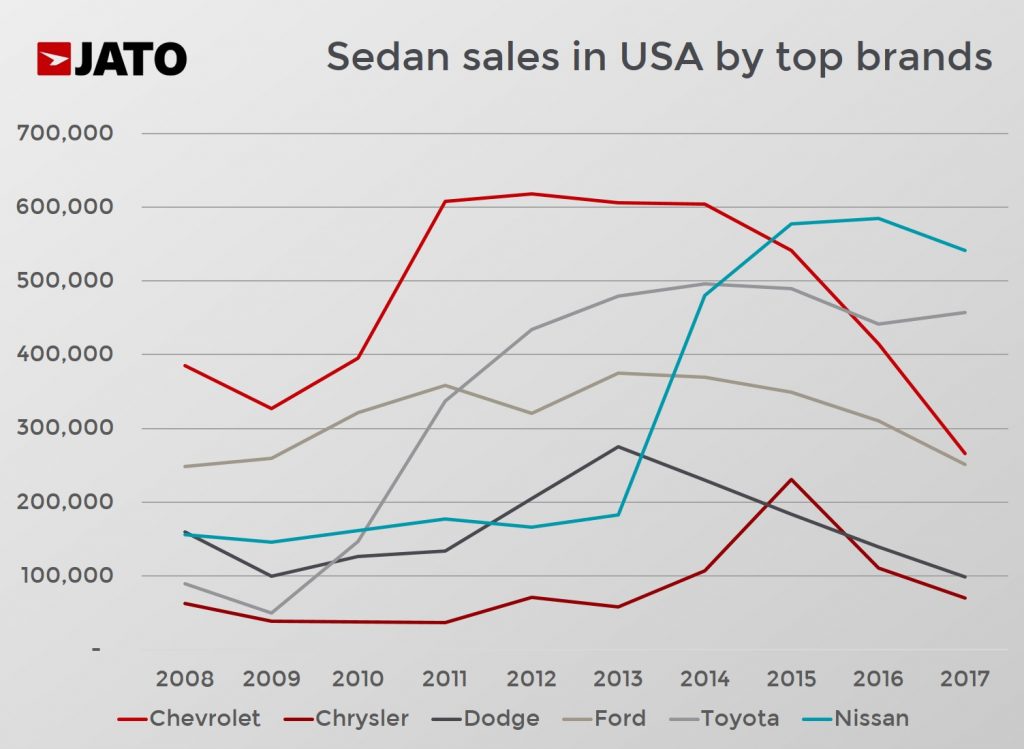 This trend is not exclusive to North America. China is now the world’s largest market for sedans with almost 10 million units sold last year, counting for 39% of the market’s total sales. Despite this strong presence, last year marked the first time that sedans didn’t dominate the majority of the Chinese market. They were overtaken by SUVs, whose market share grew from 38% in 2016 to 42% in 2017. 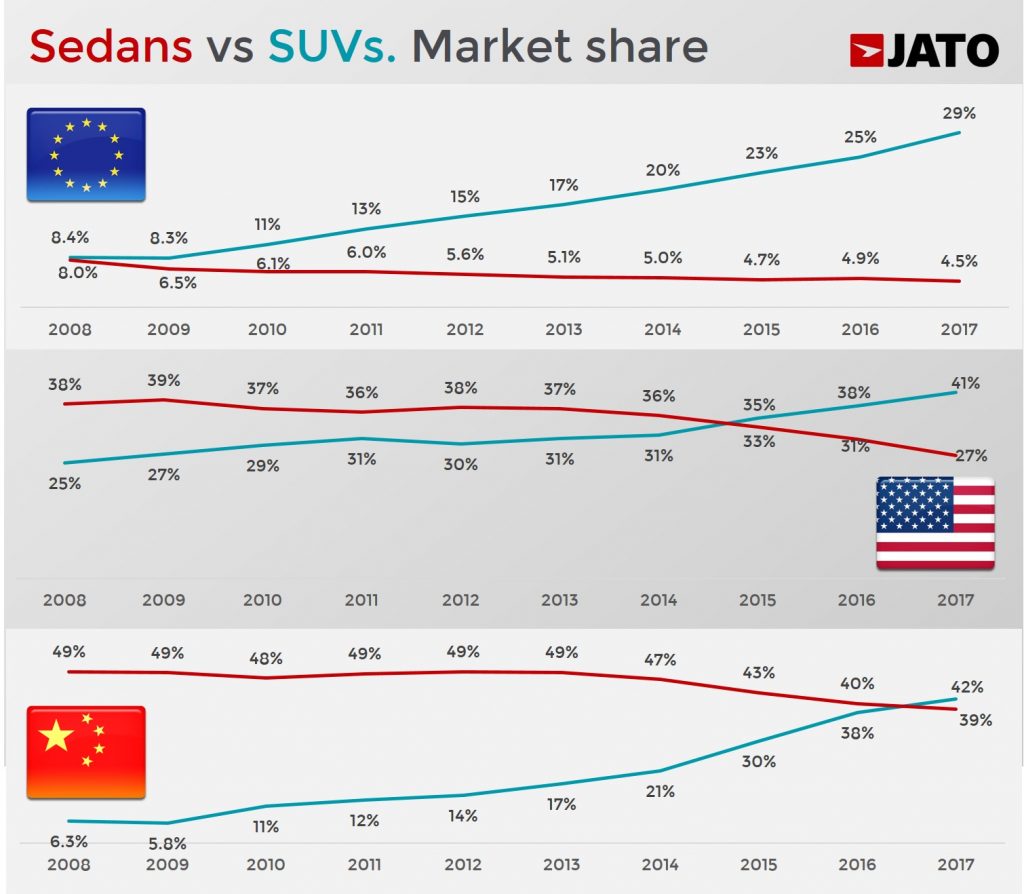 In Europe, hatchbacks have been the main victim of the SUV boom, as sedans had never played a key role in the market. However, even though sedans only have a small presence in Europe, their position is still being hampered by the SUV invasion. Their market share was just 8% in 2008 and it hasn’t stopped falling since. Last year, sedans represented just 4.5% of total car registrations (693,600 units) in Europe. This has led to car makers deserting the segment; consumers can no longer find the 4-door versions of the Focus, Astra or Golf, and mainstream brands like Nissan, Fiat, Citroen and Honda no longer offer midsize sedans.

Lighter, more appealing and more fuel-efficient SUVs are winning the battle against sedans and this will only accelerate if fuel prices start to increase again. Ultimately, consumers will base their purchases on how appealing the vehicles on the market are – and in an industry where big has now become better, sedans won’t stand much of a chance.