The death of Sergio Marchionne is not only shocking because of how suddenly it happened, but also because the industry has lost one its most capable managers. His enormous working capacity, great negotiation skills and incredible long-term vision fuelled both Fiat Group and FCA during his time as CEO.

The outcome of these efforts is that his legacy is already visible. Fiat Chrysler is now one of the world’s largest carmakers with a strong presence in North America, Latin America and Europe. The group includes nine different car brands which offer around 60 different models ranging from tiny city-cars to big trucks. At the same time, the company faces big challenges and needs to solve important issues regarding the positioning and feasibility of some of its brands.

Sergio Marchionne’s biggest contribution was turning Fiat Chrysler into a leader in the car industry. As competition becomes tougher, the global trade conditions trickier, and regulations more complicated, Marchionne’s main legacy is leaving behind a carmaker that is prepared to face these challenges. There are still many issues to fix in a short space of time, but the bankruptcy threat that worried the company some decades ago is now part of the past.

When Marchionne started out in the car industry, he had little experience and was faced with leading a company that was shrinking. Fiat Group was in a difficult position following a huge debt and bad reputation in Europe; Brazil wasn’t a big market yet; and there were no operations in North America. In 2003, right before Marchionne was appointed CEO, the Italian carmaker sold around 1.76 million units, of which 84% had the Fiat badge. The company was selling mostly subcompacts (40% of its total sales) and the total was one of its lowest since 1997.

It took him two years to start seeing positive results. The wise GM operation and a more fortunate economic situation had a positive impact on the company’s position. For the first time in its history, Fiat Group sold more than 2 million vehicles thanks to higher demand in all of its key markets. Increased demand in Italy helped drive sales, as well as increased popularity in the Brazilian market. Despite improved results, the Italians were still behind some of their European peers and even Chrysler Group. In 2006 more than half of Fiat Group’s global sales were subcompacts. 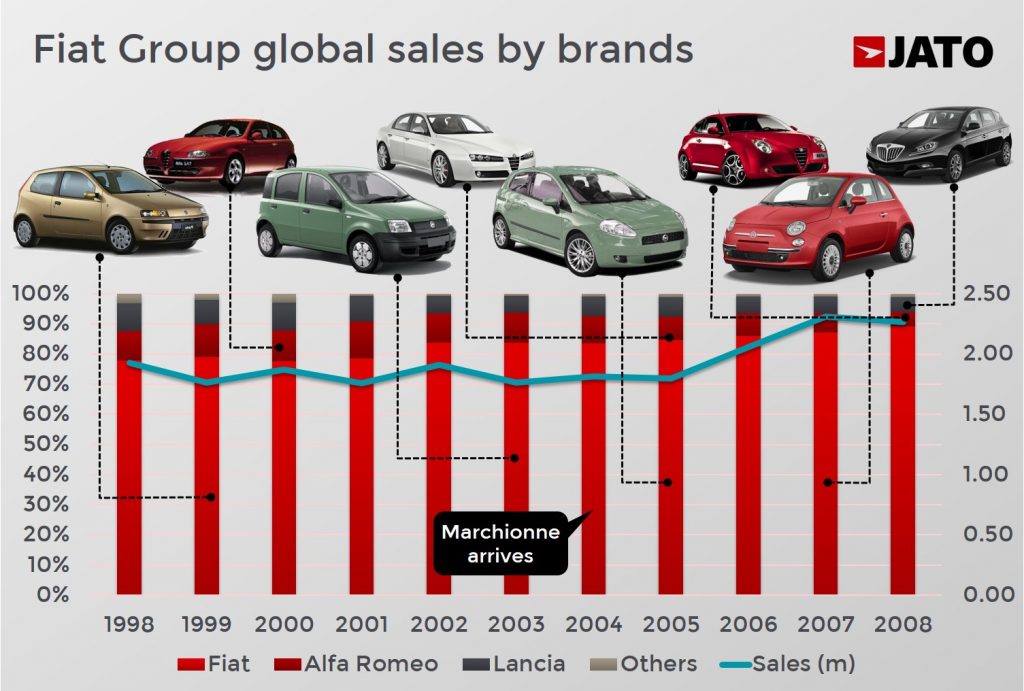 The path to growth was focused on small cars, which allowed Fiat Group to keep running big production plants and reach more consumers in Europe and Brazil. This is why we saw the spectacular presentation of the Fiat 500 in July 2007, the arrival of the first subcompact from Alfa Romeo and the reintroduction of the Lancia Delta in 2008. Fiat Group wanted to succeed as a small/hatchback car producer. In 2007 the Italians sold a record 2.31 million units, which jumped to 2.36 million two years later.

It seemed that the efforts made by Sergio and his team were paying off. Fiat Group’s healthy position permitted one of Marchionne’s most brilliant operations: the acquisition of Chrysler. Fiat and Chrysler had little in common, but both needed each other in order to survive. The Italians would give Chrysler their solid financial numbers, while the Americans would give FCA entrance into the world’s largest car market at that time. The union was near perfect but still required tons of work in order to save Chrysler.

Somehow they made it. Chrysler Group jumped from selling 1.27 million units in 2009 to 1.48 million in 2010 and 1.79 million in 2011. Marchionne knew how to exploit the best of Chrysler: Jeep and its Ram trucks. This allowed the carmaker not only to recover its key role in the American car market, but also to start its expansion globally. At the same time, Chrysler’s comeback meant that Fiat and Alfa Romeo could finally start selling their cars in North America.

The union between Fiat and Chrysler came at the right time. While the American economy was recovering from the financial crisis, Fiat and its European peers were entering one of the most difficult periods of the last decade. The Italian side of the Fiat-Chrysler alliance was vulnerable to the dark years in Europe, as most of its sales occurred there – and when the crisis hit, its sales shrunk. But just as Fiat had saved Chrysler, Chrysler then saved Fiat.

While Marchionne was managing the Chrysler deal and the impact of the economic turmoil in Europe, another change was taking place in the global car market. The popularity of SUVs took off in Europe and China, following their rapid growth in North America. The consumer had a new preference which meant a break with the past. The immediate impact was on product planning, as car makers needed to change their project priorities and start delivering more SUVs to the markets.

The acquisition of Chrysler was a key element in making FCA a player in the SUV segment. As part of Chrysler, Jeep allowed the new group to be part of the SUV boom with a global brand that has the right appeal. Mike Manley, the new FCA CEO, was in charge of Jeep when the brand was revived in the US and introduced to global markets. Under his watch, the brand increased its global sales from 320,000 units in 2009 to 1.4 million units last year. 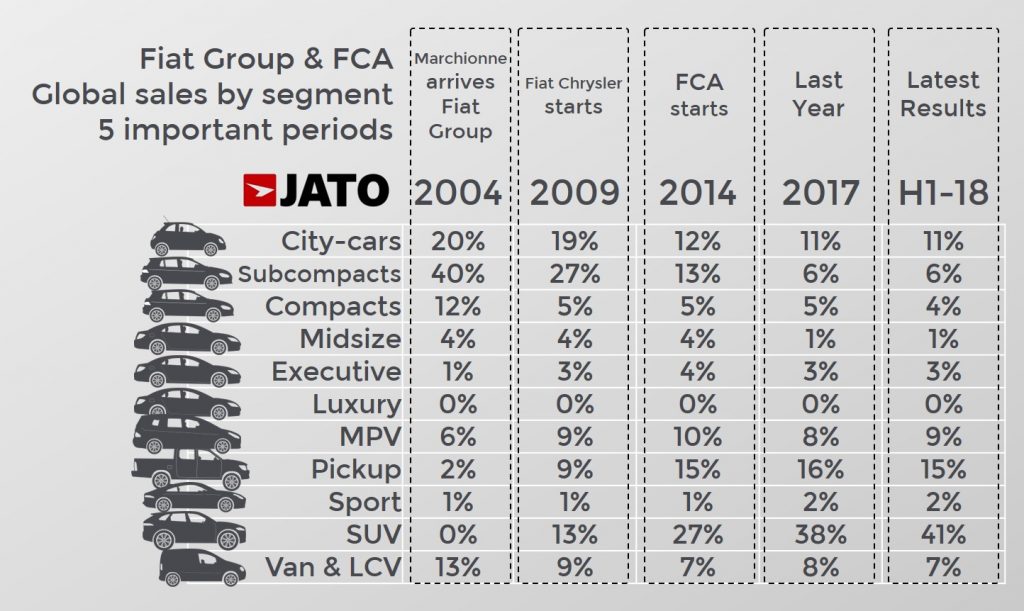 In fact, the rapid expansion of Jeep and the excellent results of the Ram brand were the main drivers of growth for FCA during the last five years. Now the group relies more than ever on these two brands and the North American market. The downside of this change was that the Italian brands lost their edge and don’t count for the biggest part of FCA’s sales anymore. When Chrysler Group was acquired in 2009, its sales counted for 35% of FCA’s total. Last year, the American brands of the group (Jeep, Chrysler, Dodge and Ram) made up 62% of the total.

This means that the positive impact of the Chrysler acquisition in 2009 has been offset by the drop in demand for the Italian cars. While Lancia is nearly disappearing from the landscape, Fiat tries to find its place among the mainstream European makers with a limited range of products and very few SUVs. Alfa Romeo and Maserati show some signs of life with newer models, but they are still far away from their premium and luxury competitors in terms of sales volume.

Sergio Marchionne leaves a big carmaker in a solid financial situation. Most of its products are globally known and some of them are the leaders in their segments. His intuition and enormous capabilities allowed the Italian car industry to survive and become a real global player. Now the challenge is to maintain this important role and increase their presence through more competitive and appealing vehicles. The healthy financial situation will support an expansion of the product line to introduce more competitive products, but it is up to Mike Manley now.