The European car market slowed for several reasons in May, recording only a 0.5% increase on the same period last year. Despite this, it is clear that the market is stabilising after a long period of strong growth. Overall the market recorded positive signs, with May posting its highest volume since May 2007 and the YTD figures the highest for this century. On a country level, January – May 2018 constituted the strongest period for Germany since 2009 and Spain since 2007. The slower overall progress can be attributed to the market stabilising following a long period of strong growth.

SUVs bucked the trend seen in the rest of the market which showed signs of deceleration of growth. Volume for SUVs grew by 24.2% in May, whilst in contrast all other segments registered a decline of 8.5%. SUVs were the best selling segment in 23 of the 27 markets analysed, only being outsold by subcompacts in Greece, Croatia, Romania and Portugal. The outstanding performance of SUVs in May is the continuation of a longer term trend, with it marking the thirteenth consecutive month of double-digit growth.

In contrast to May 2017, the biggest driver of growth amongst the SUVs was the small SUV subsegment, which totalled 182,000 units, a significant increase of 37%. This strong performance can be attributed to the growth of both the segment leader – the Renault Captur and second generation Dacia Duster which recorded increases of 26% and 29% respectively. Other launches such as the Volkswagen T-Roc, Citroën C3 Aircross and Opel/Vauxhall Crossland also all recorded strong results. 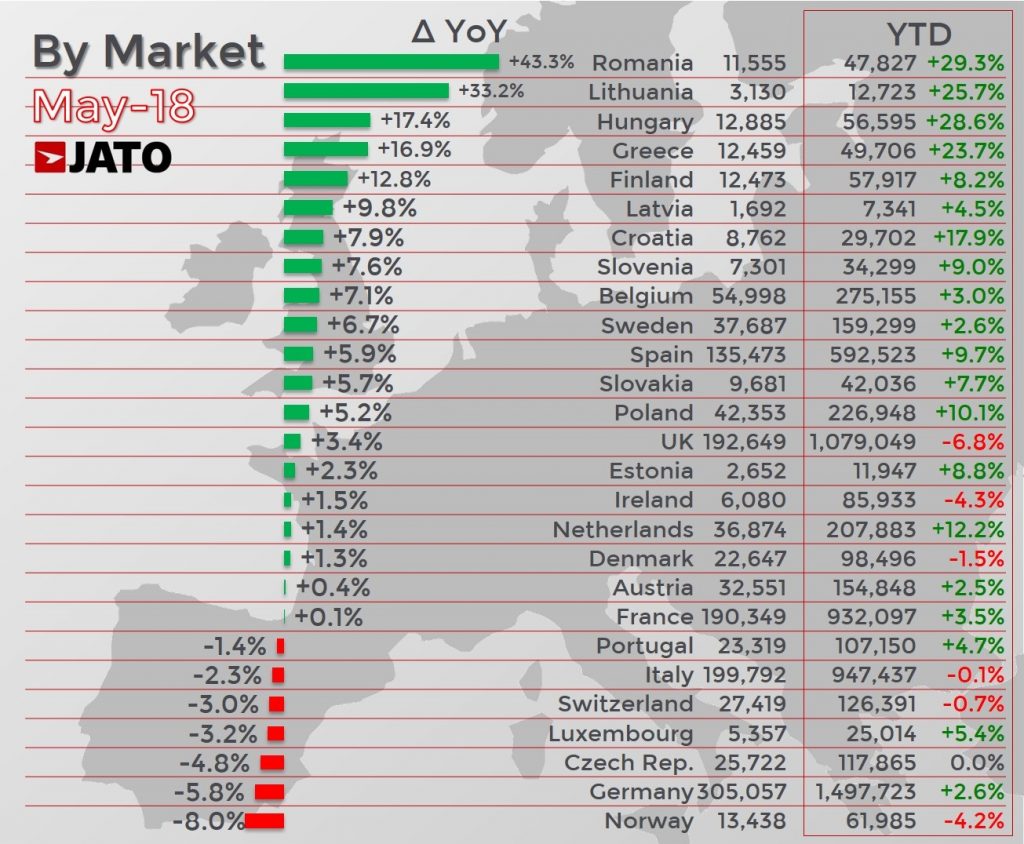 Felipe Munoz, JATO’s Global Analyst, commented: “The recent period of sustained growth has resulted in changes in the composition of the market – with the SUV segment growing in significance as the only alternative to traditional segments. The increasing significance of the SUV segment is evident in the performance of the market’s latest launches; almost two thirds of the cars launched currently are SUVs, meaning that the market offering and consumer demand are both favouring SUVs, and we’re likely to see more from SUV manufacturers as this segment increases its dominance. This, combined with the continued decline of the diesel fueltype is altering the make-up of the automotive market, meaning that we may no longer see the huge increases of previous years as the market continues to stabilise. It will be interesting to see how this trend develops as manufacturers adapt.”

Compact SUVs also contributed to the market’s performance, recording a total increase in volume of 23% compared to the same period last year, with 208,600 units registered. The Volkswagen Tiguan was Europe’s best selling SUV, closely followed by the Nissan Qashqai and Peugeot 3008.

Despite the boost from SUVs, the growth in the market continued to stabilise as the automotive sector struggled with the declining fortunes of the diesel fueltype. Registrations of diesel vehicles were down by 19% compared to the same period last year, which meant diesels accounted for 36% of total registrations for the 17 European markets analysed. Despite this, the decline in diesels was not offset by volume increases in the gasoline and hybrid markets. Volume for gasoline vehicles grew by 15%, whilst AFVs recorded a volume increase of 27% which was boosted due to the increasing numbers of electric cars and plug-ins available in the market.

In the model ranking, the Volkswagen Golf maintained its leading position, despite a decline in volume of 4%, in part due to reduced demand in Germany and France which saw declines of 6.6% and 29% respectively. The Clio, Polo and Fiesta maintained their positions, whilst notably the Volkswagen Tiguan rose up the ranking by four places to fifth position. The Dacia Sandero also improved its position, rising from tenth in May 2017 to sixth this year. The Ford Focus and Renault Captur also re-entered the top ten due to strong performances. 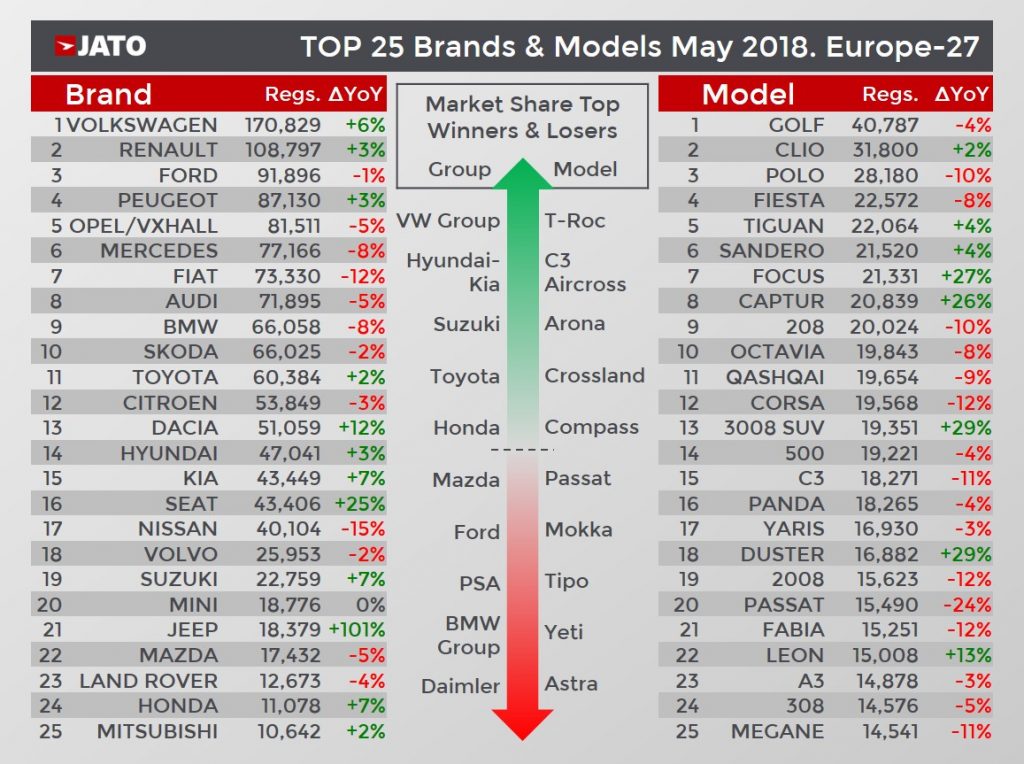 The Volkswagen T-Roc was the hero of the month, it placed 26th in the model ranking, outselling the Opel/Vauxhall Mokka and meaning it was the fourth bestselling small SUV in Europe. Other strong performances in May came from the Peugeot 3008, Dacia Duster, Ford Ecosport, Peugeot 5008, Audi Q5 and BMW X3.