New car registrations in the 29 markets analysed by JATO Dynamics show that the positive trend in automotive sales is continuing – with new car registrations during May 15.1% higher than the same month in 2015. A total of 1.33 million units were recorded, the second highest total this year and the best result in May since 2012. Last month’s percentage growth was also the highest so far this year, and surpasses the 1.5% increase recorded between in May 2015 and May 2014. The growth is due to strong increases in four of the five largest markets, with Italy up by 28% and France in fourth position with its volume increasing by 22%. Belgium, Poland, Czech Republic, Greece and Hungary also recorded significant increases.

Volkswagen was the best-selling brand, with 148,600 units registered, accounting for 11.2% market share. By comparison, in May 2015, its volume accounted for 12.4% of the total market. Last month’s market share for Volkswagen was the lowest in May since 2008. The German brand recorded decreases in major markets such as Germany and Spain, with each declining by 1%, the UK was down by a significant 7% and the Netherlands fell by a dramatic 17%. In comparison, the brand grew its market share in some markets such as Belgium, Switzerland, Greece, Sweden and Czech Republic. During May, sales of Volkswagen SUVs were down by 14% whilst compact cars were down by 3%. The most significant movement in May was Renault surpassing the 100,000 units mark with an outstanding 34% increase. This was due to demand in its home market, France, where it increased sales by 33%, strong increases in Italy, where it was the second best-selling brand, as well as increases in Germany and Spain. As a result, the French brand was able to increase its market share from 6.6% in May 2015 to 7.7% in 2016, reaching the highest May point since 2010. Its SUVs and subcompacts drove the growth with 79% and 26% growth respectively. Volkswagen and Renault were followed by the other three big mainstream brands: Ford which was negatively affected by the UK market, Opel/Vauxhall which saw UK volume fall by 21% and Peugeot which benefited from French growth. 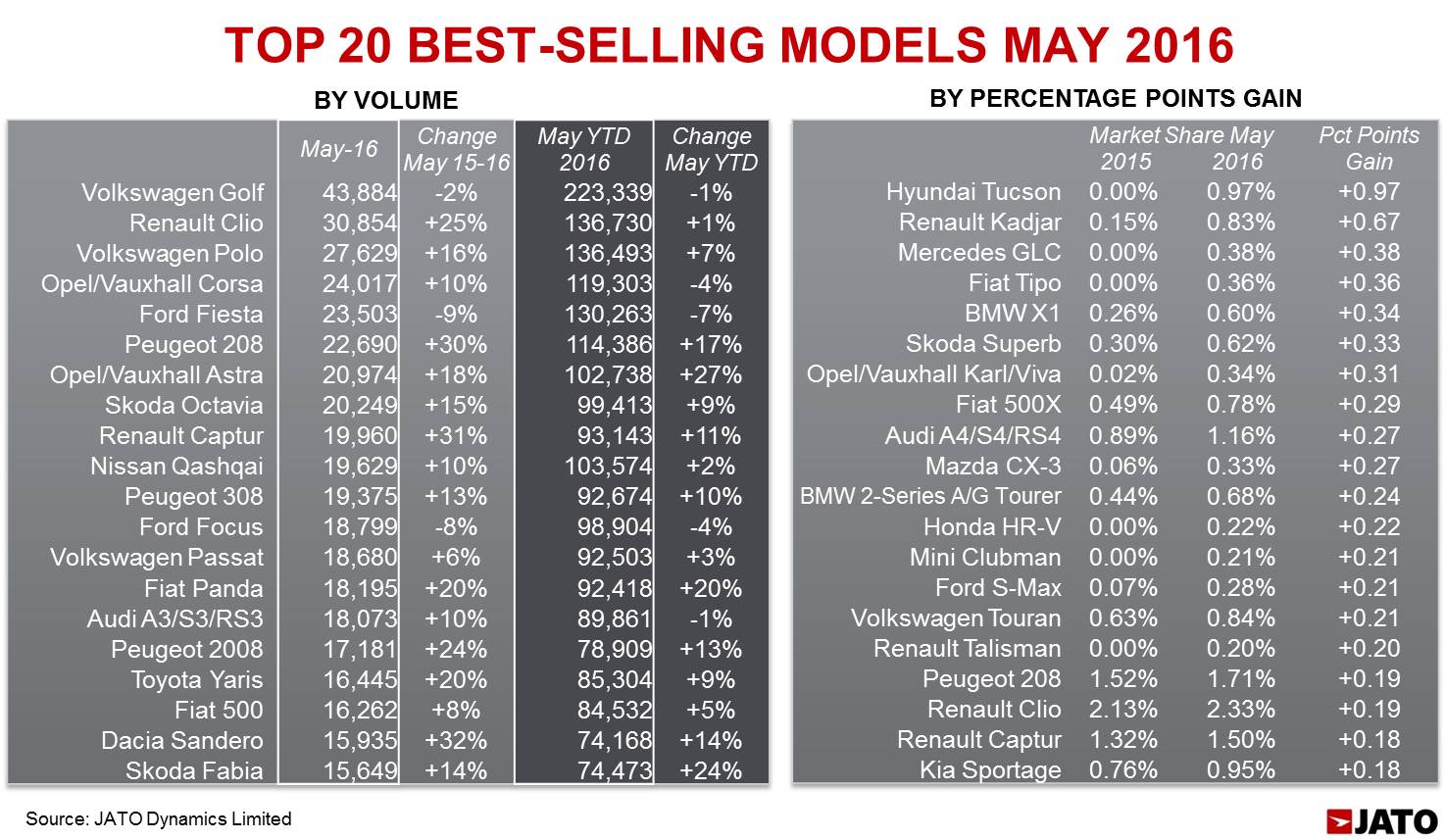 The premium ranking was led by Audi which recorded 75,000 units, which is more than 5,000 units ahead of Mercedes and BMW, which both recorded 69,700 units. In contrast to Volkswagen, Audi posted a 19% increase thanks to higher demand in Germany, Italy and Spain. Mercedes was the second best-selling premium, increasing its volume by 13%, but this was only five units ahead of BMW, which recorded a bigger growth of 22%. Fiat was seventh in the ranking buoyed by the Italian market where its registrations grew by 33%. This brand recorded its second best market share since February 2011.

“The premium brands are clearly benefiting from the positive growth in Europe. Mainstream brands such as Renault, Peugeot and Fiat are also benefiting from Volkswagen’s slowdown,” commented Felipe Munoz, Global Automotive Analyst at JATO Dynamics.

While the model ranking was led by the Volkswagen Golf, the real drivers of change were the Renault Clio and Captur, and the Peugeot 208. Registrations for the Golf were down by 2% to 43,900 units, taking it to its lowest market share since June 2011 – 3.23%. In contrast, the Opel/Vauxhall Astra, Skoda Octavia and Peugeot 308 outperformed the segment’s growth of 11%. The Clio boosted the B-Segment’s registrations with a rise of 25% which took the segment’s growth to 12%. Other models recording growth included the Volkswagen Polo (+16%), Peugeot 208 (+30%), Toyota Yaris (+20%) and Dacia Sandero (+32%). The Captur meanwhile was the best-selling SUV. Last month’s SUVs registrations accounted for 24.4% of the European total, up by 2.7 percentage points compared to May 2015. This segment was mainly boosted by strong sales of B-SUVs, and particularly an 82% increase posted by the Fiat 500X. In addition, the Jeep Renegade grew by 53% and the Suzuki Vitara posted a 39% rise, the Ford Ecosport posted a significant 109% increase and the Mazda CX-3 posted a 497% rise. 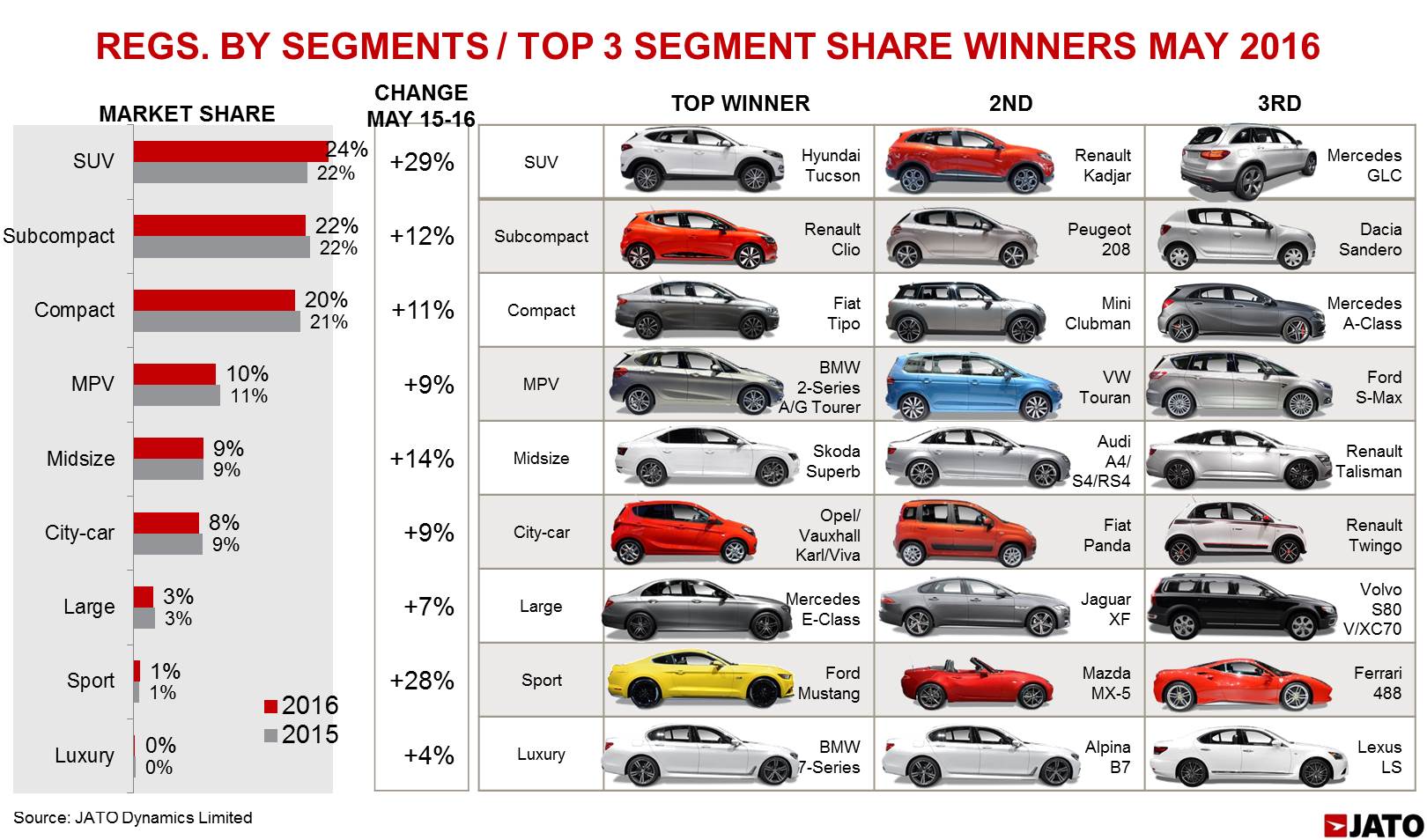 Compact SUVs (C-SUV) recorded a 34% volume increase thanks to the new Hyundai Tucson, in second position behind the Nissan Qashqai which posted a 10% increase. Within this ranking the Kia Sportage recorded strong growth of 43%, the Renault Kadjar posted a 520% increase and the Ford Kuga recorded a 44%, which outperformed the Volkswagen Tiguan which was down by 18%, moving from second to the sixth position in this subsegment. Demand for the largest SUVs (D-SUV and E-SUV) expanded by 26% with the Mercedes GLC, Nissan X-Trail, Land Rover Discovery Sport, Volvo XC90 and Audi Q7, all recording significant increases.

MPVs continued to lose ground with registrations up by 9% as the Volkswagen Touran and Fiat 500L’s gains were offset by the fall posted by the Volkswagen Golf Sportsvan and Renault Scenic. Midsize sedan/SW was the fifth best-selling segment with a stable market share of 8.8%, it was led by the Volkswagen Passat, Audi A4 and Mercedes C-Class. The market was completed by the City-cars segment which posted 9% growth, Large sedan/SW with 7% growth, Sport cars which was up by 28% thanks to the Ford Mustang at third place, and the luxury segment which grew by 4%.

Felipe Munoz, Global Automotive Analyst at JATO Dynamics concluded: “The market is continuing to experience positive growth with many segments increasing sales. Small SUVs continue to be the big winners whilst MPVs lost out as consumers look towards more appealing designs.”