SUVs make up 40% of total car registrations, as the European market records its best October result since 2009

The European car market continued to grow in October 2019 as 1,208,700 vehicles were registered – the highest October volume of the last 10 years. The strong growth, which can partly be explained by the market dropping in October 2018 following the introduction of WLTP, has improved the year-to-date figures overall. However, the market is still down 0.8% on the same period last year, with 13,284,600 vehicles registered so far in 2019. “The European market is facing a myriad of challenges at the moment, but the biggest threats to growth are not having a significant impact on sales – at least for the time being,” explains Felipe Munoz, JATO’s global analyst.

17 of the 27 markets included in JATO’s analysis posted double-digit growth in October 2019. It was a particularly good month for Germany, where demand increased by 13%. “If the German market can continue to avoid a recession, then the state of the global industry might not be as bad as first expected,” continues Munoz. 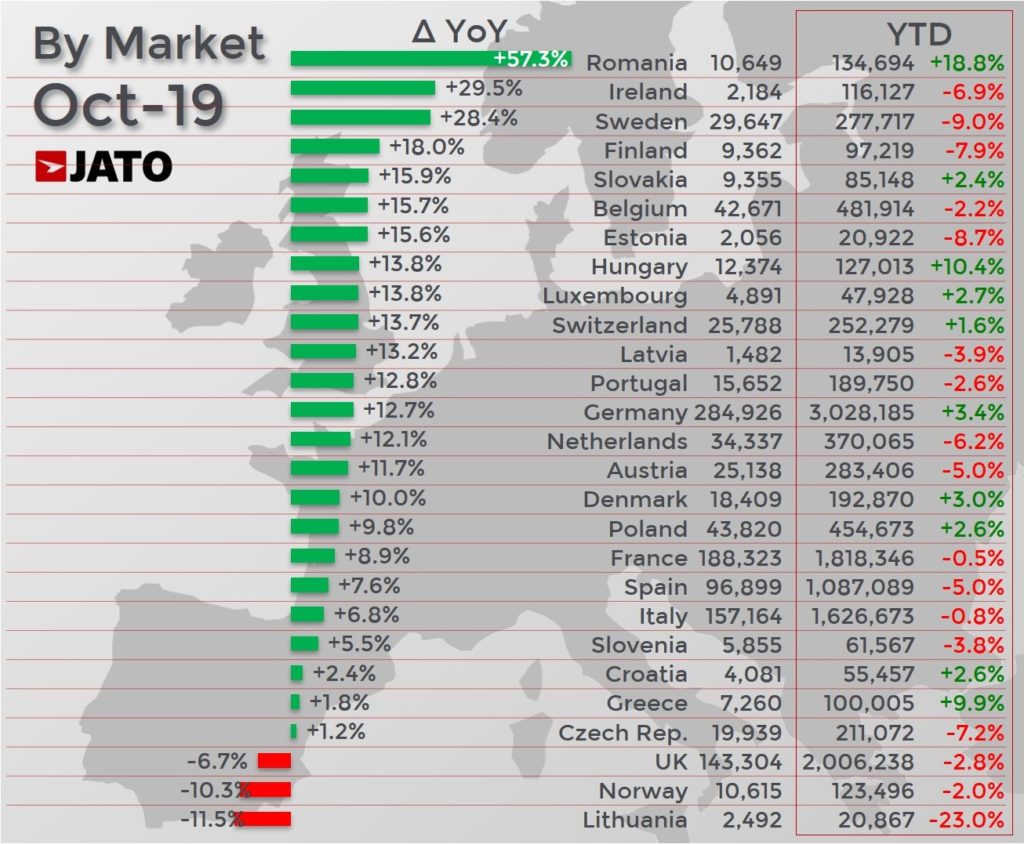 October’s results can also be explained by increased consumer demand for SUVs and electrified vehicles. SUVs, in particular, were an important source of growth during the month. In October 484,400 SUVs were registered in Europe, as demand increased by 22% on the same period last year and the segment posted a record market share of 40%. “Europe is slowly equalling the USA and China in terms of SUV penetration. This is mostly because of small and compact SUVs, which are hugely popular across the continent and make up 79% of all SUV registrations,” explains Munoz.

Electrified vehicles also boosted the overall market as they continued to gain traction in October. Demand increased by 79% for plug-in hybrid cars, 32% for pure electric cars and 29% for hybrid cars. European consumers bought 115,700 electrified vehicles during the month – which is 41% more than in October 2018 – as the fuel type counted for almost 10% of all passenger car registrations. “The results show that despite the high price of electrified vehicles, consumer interest is definitely there, and the latest market launches are being well-received,” explains Munoz.

However, the market’s growth didn’t benefit all of the industry’s key players, with Volkswagen Group the sole winner of the month. The Germans posted a 4.4-point market share increase – the highest amongst all automakers – jumping from 20.7% in October 2018 to 25.1% last month. Hyundai-Kia, Toyota, Renault-Nissan, Mazda and Tesla also recorded market share gains, but their combined increase did not exceed 1 point overall. “Volkswagen Group is more solid than ever thanks to the SUV offensive. In fact, one in 10 vehicles registered in Europe is now an SUV made by the German group,” Munoz concludes.

Meanwhile, notable results from the brand rankings include Opel/Vauxhall and Fiat falling out of the top 10; Volvo outselling Nissan; Porsche outselling Honda; and Tesla recording a 129% volume increase to 2,093 registrations. 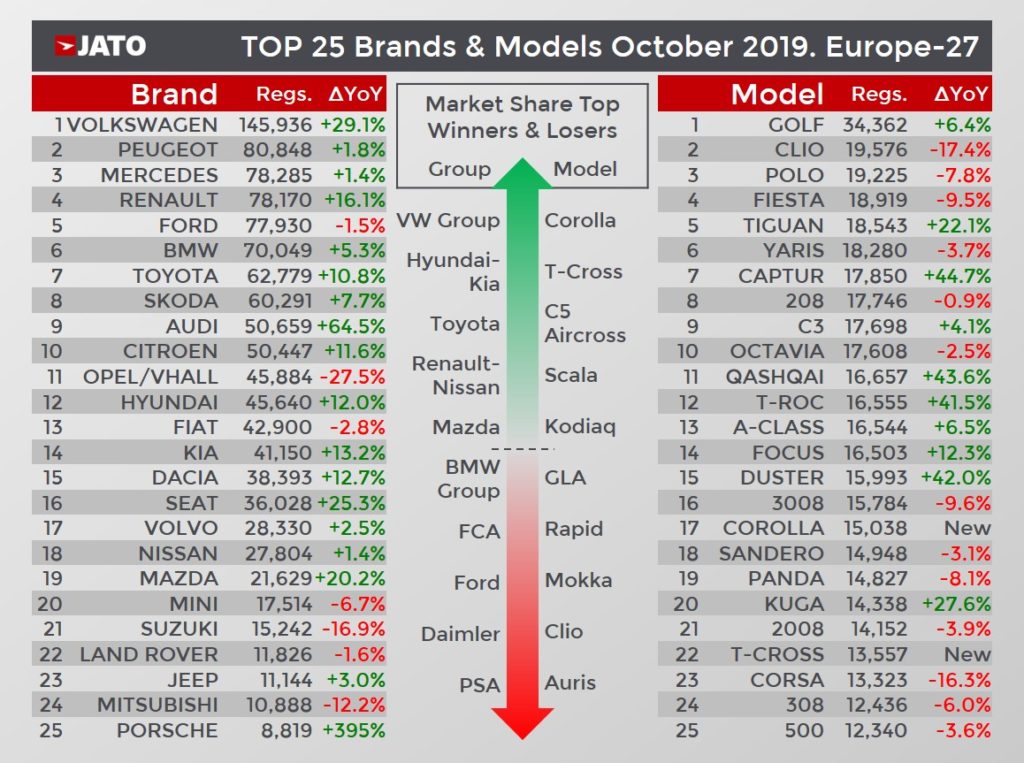