Consumers all over the world are crazy about premium and luxury cars, with many drivers in the developed, and the emerging markets, seeing it as a dream to own one. Audi, BMW and Mercedes represent not just a car but an aspirational item that it’s good to own. This is one of the main reasons behind their strong growth during recent years and continues to be a strong asset. With globalization, it is easier and cheaper for many consumers to afford one of the German premium models.

Unlike the rest of the industry, the premium category has been able to handle the economic crisis and gain a bigger share. While the mainstream cars struggle to maintain their positions in a more competitive global market, the premium makers use their status to offer more than just mobility. The status and experience factors are the main differences between regular cars (did anyone say “commodity”?) and a fancy, personalized and exclusive car. 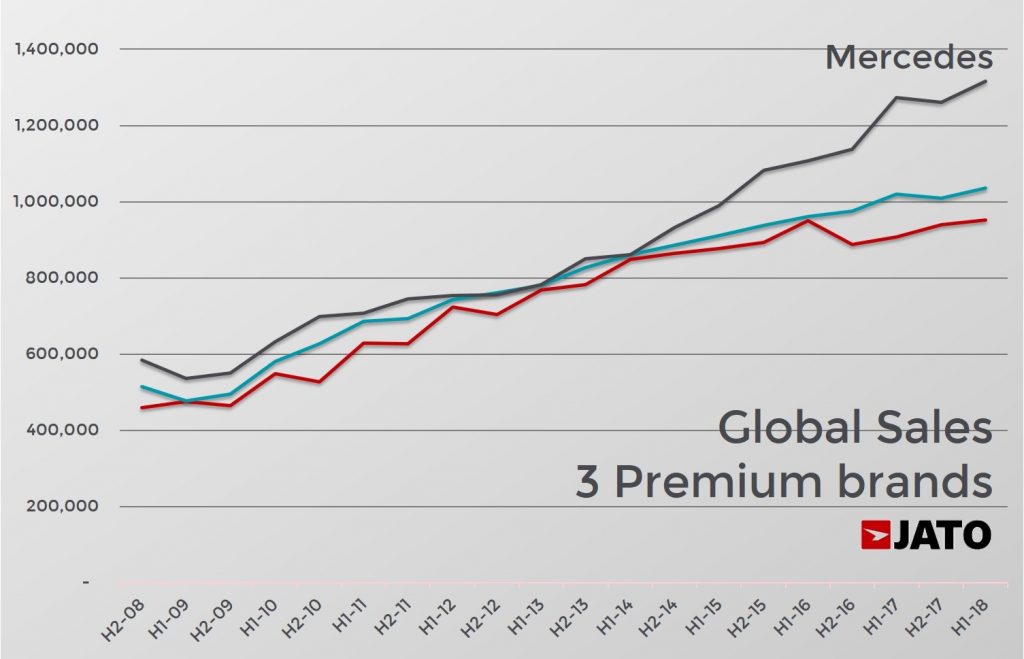 As Andy Palmer, CEO of Aston Martin, said during the last ANE congress in Turin, small manufacturers can better respond to market and customer needs. The giant players usually invest a lot in the development of a new car only to discount it at its launch, while the rebate gets bigger as the model gets older. This is not the case for premium makers, which despite becoming bigger than ever (Germans, Volvo and JLR), are still considered an exclusive car to have. 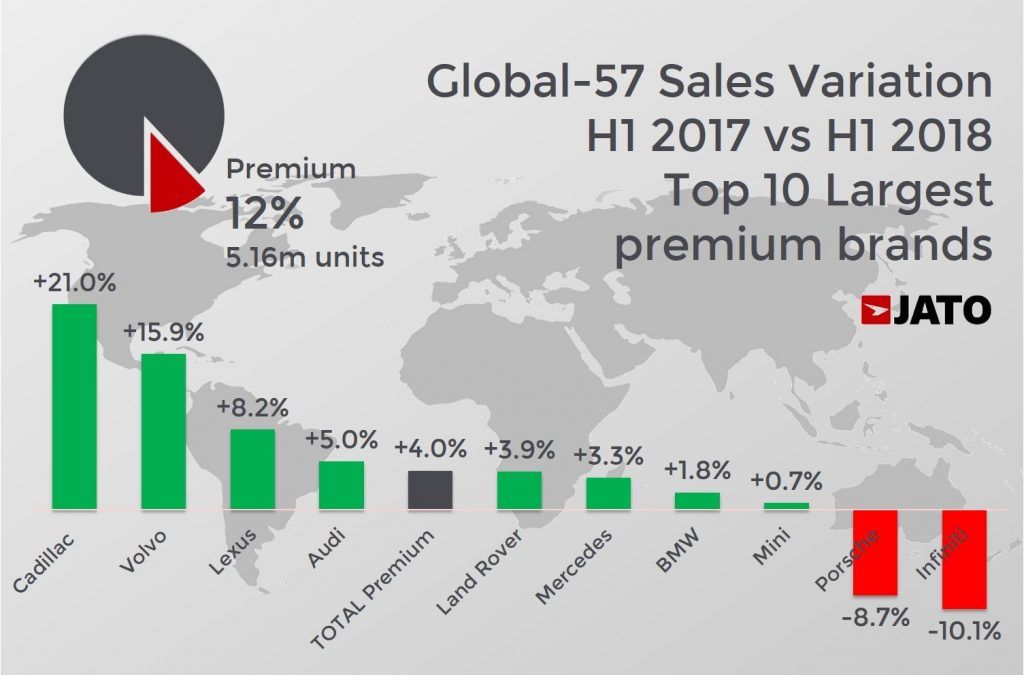 Despite their popularity, the strong growth posted by Audi, BMW and Mercedes since 2010 is slowing down. Global sales growth during the first half showed a clear lower rate than in the previous years, indicating that certain factors are having more of an impact than expected. Mercedes-Benz confirmed its top position with 1.19 million units, ahead of BMW with 1.06 million and Audi with 950,000 vehicles.

It was the best ever first half for Mercedes and BMW, as Audi is still recovering from the challenges derived from the diesel issues. However, Mercedes’ percentage growth was lower than in the previous periods. The manufacturer posted a 3.9% increase compared to the +13.7% registered in H1 2017 when compared to H1 2016. That is almost 10 percentage points less. In the case of BMW, the volume increased by 2% in H1 2018, and far away from the 5.2% in H1 2017. Audi seems to have recovered from the difficult times it faced last year, with its sales up by 4.5% against a decline of 4.7% in H1 2017. However, Audi’s total in H1 2018 was lower than the total registered in H1 2016. 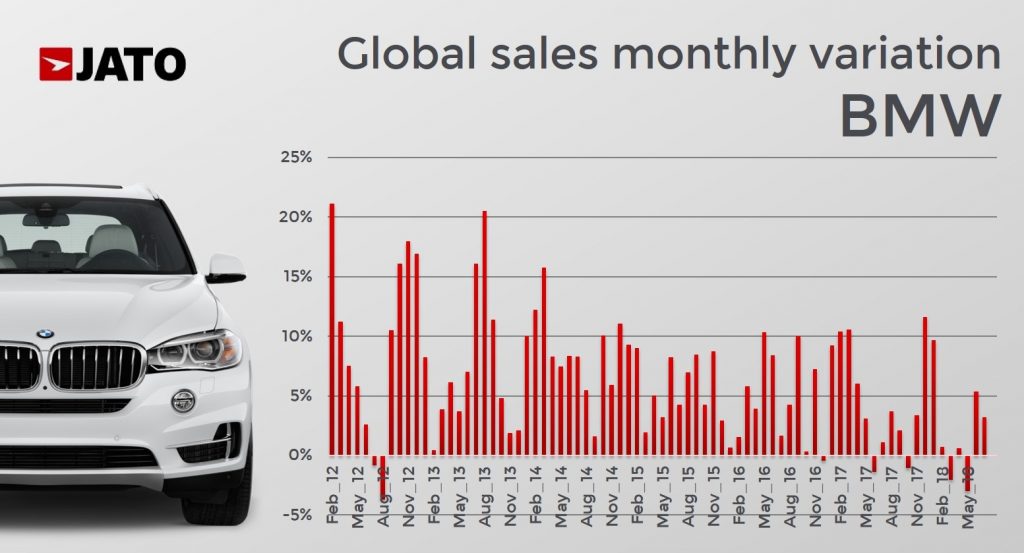 Why is this happening? There are several reasons for this slowdown. First, the growth cycle. After years of strong increases, sales tend to reach a peak with the consequences impacting growth rate. It is normal to see this trend now when some key markets for premium cars, like the USA and the UK, are showing signs of stagnation. But this isn’t the case for the majority of mainstream big players, which have dealt with several issues in the past and are now finally growing faster. 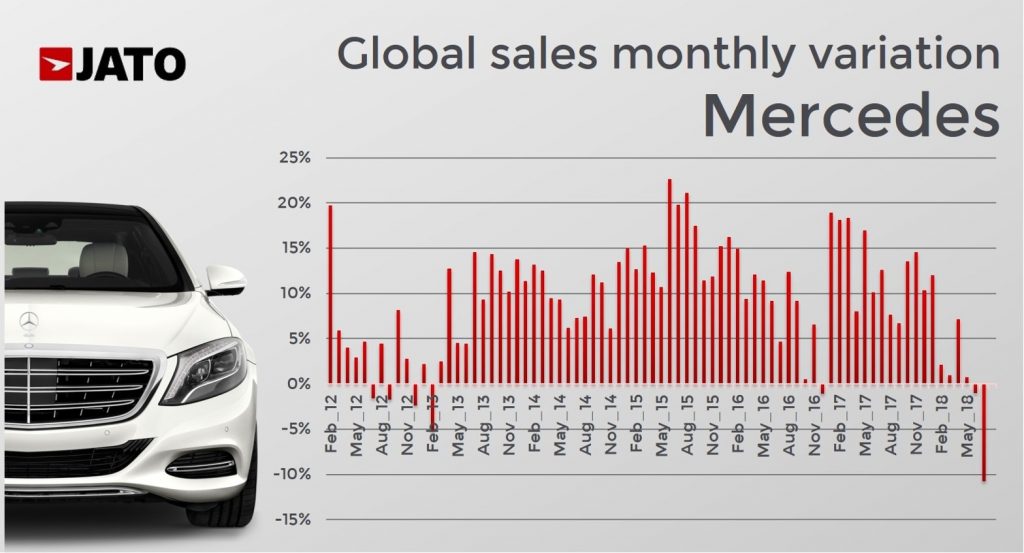 The age of premium products also helps to explain this trend. The key models of the three German brands are getting old, resulting in negative consequences on sales. The Audi A3, Audi’s top seller in 2017, was unveiled in the 2012 Geneva Motor Show and went on sale in Europe in September 2012. Global sales of this model posted a 5% decline in H1 2018 following drops in the UK, USA, France and Spain. The BMW 3-Series, launched in Q1 2012, saw a 7% decrease in H1 2018 but was still BMW’s top-seller. The all-new generation is expected at Paris motor show 2018. This is similar to what happened to the Mercedes C-Class, with its global volumes falling by 5% during the same period. 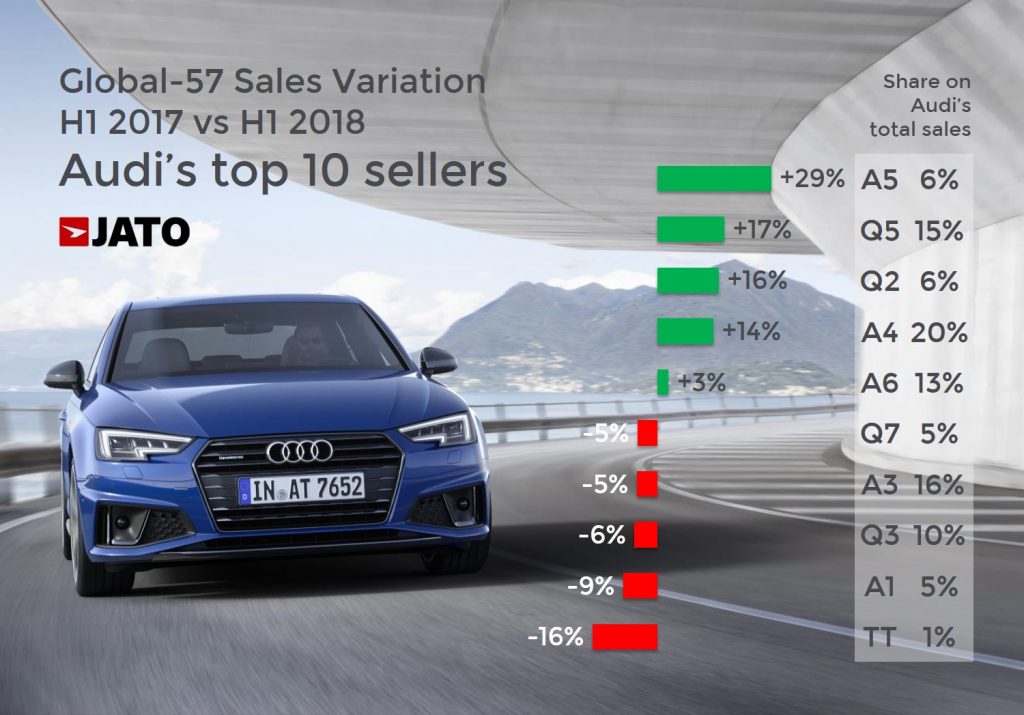 Another factor affecting the global performance of the German premiums is the increase of rivals available in the market. Volvo, Jaguar Land Rover, Lexus and more recently Alfa Romeo, DS and Genesis are slowly gaining market share. As these brands struggle with their sedans, they are hitting the Germans with SUVs, and this is of course having an impact. The Q3, X1 and GLA are not alone anymore, as the Volvo XC40, DS 7 Crossback and Lexus UX recently joined the market. The same happened to the Q5, X3 and GLC, with the arrival of the Stelvio, F-Pace and Velar. The premium consumer could be considered conservative, but this may be changing thanks to a wider range of choices.

The diesel issue is another big trend having an impact on Audi, BMW and Mercedes. European diesel car registrations fell by 17% in H1 2018 counting for 36.7% of total volume. As this fuel-type is more popular among premium cars, the impact is bigger in this category, and the Germans are not the exception. The demand for diesel Mercedes fell by 12%, and was even worse for BMW and Audi with drops of 18% and 22% respectively.  Despite this fall, diesel still counts for a big part of their sales in Europe. The negative impact is worsened by the fact that there is still a limited choice when thinking of electric or hybrid premium cars.

Finally, the trade war between USA, EU and China represents a big challenge. BMW and Mercedes are the largest US car exporters, but they also import a lot of cars to the USA from Germany. If higher tariffs come into effect, the German premium makers are likely to be one of the most exposed to the negative consequences. Audi, BMW and Mercedes are living in challenging times, but they are prepared to face them after years of continuous growth.