The rapid transformation of Volvo

If there’s a car brand that springs to mind when thinking of a rapid and positive transformation, it is Volvo. The industry is now getting used to seeing more frequent reveals from the Swedish maker, along with a new design language that is appealing to more consumers around the world. Volvo is now a strong premium player with an improving image, which is partly thanks to its successful launches over the last few years. 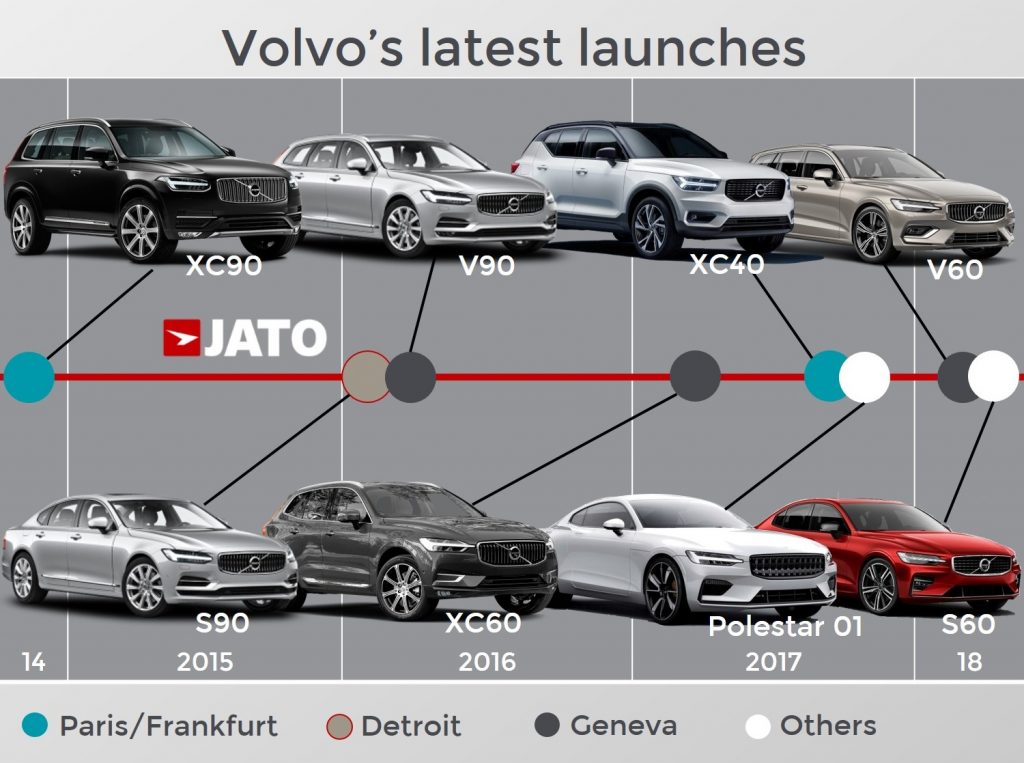 Volvo launched eight different all-new models between October 2014 (Paris motor show) and June 2018. That equates to around two new launches a year, which is quite high considering Volvo’s global presence and its small range of products. As a matter of comparison, its German rivals launched 10 new cars each during the same period of time. In less than four years Volvo has introduced three SUVs, four cars and one sports car. 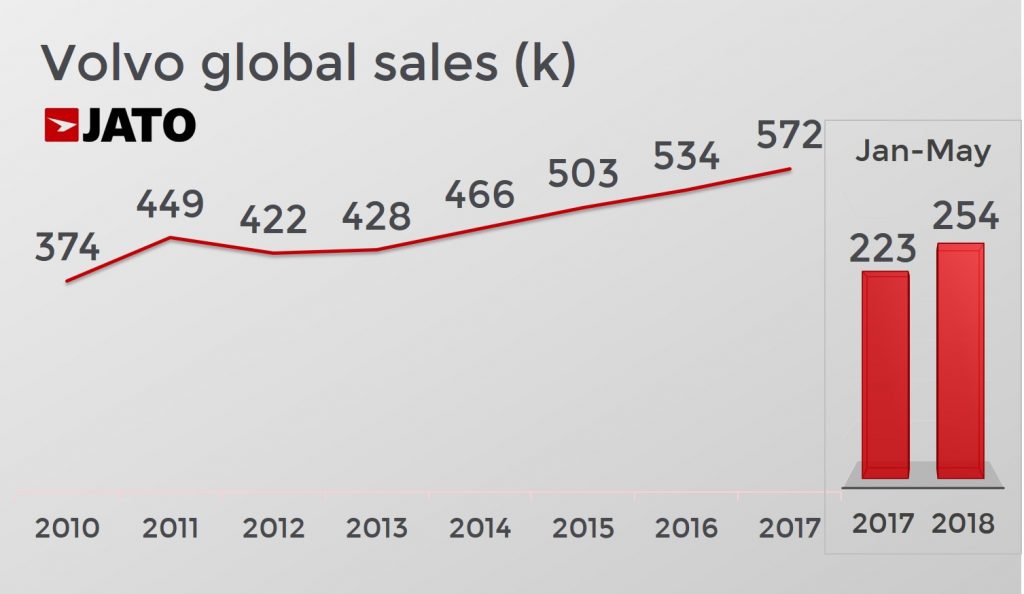 The continuous launches have had a positive impact on global sales, and the brand continues to post records every year. In fact, since the introduction of its new design language in 2014 with the second-generation Volvo XC90, Volvo’s global sales growth has accelerated and hasn’t stopped since then. In 2014 global sales totalled 466,000 units, which then jumped to 503,000 units in 2015, up by 8%.

Results continued to improve in 2016, to 534,000 units, due to the arrival of the S90 in Detroit 2016 and V90 in Geneva 2016. Even if they are not SUVs, they have managed to bring new clients to the brand thanks to their unique design and high quality. Despite the strong competition from the Mercedes E-Class and BMW 5-Series, the S90/V90 has had a brilliant career so far. Since their introduction the brand has sold 163,000 units. 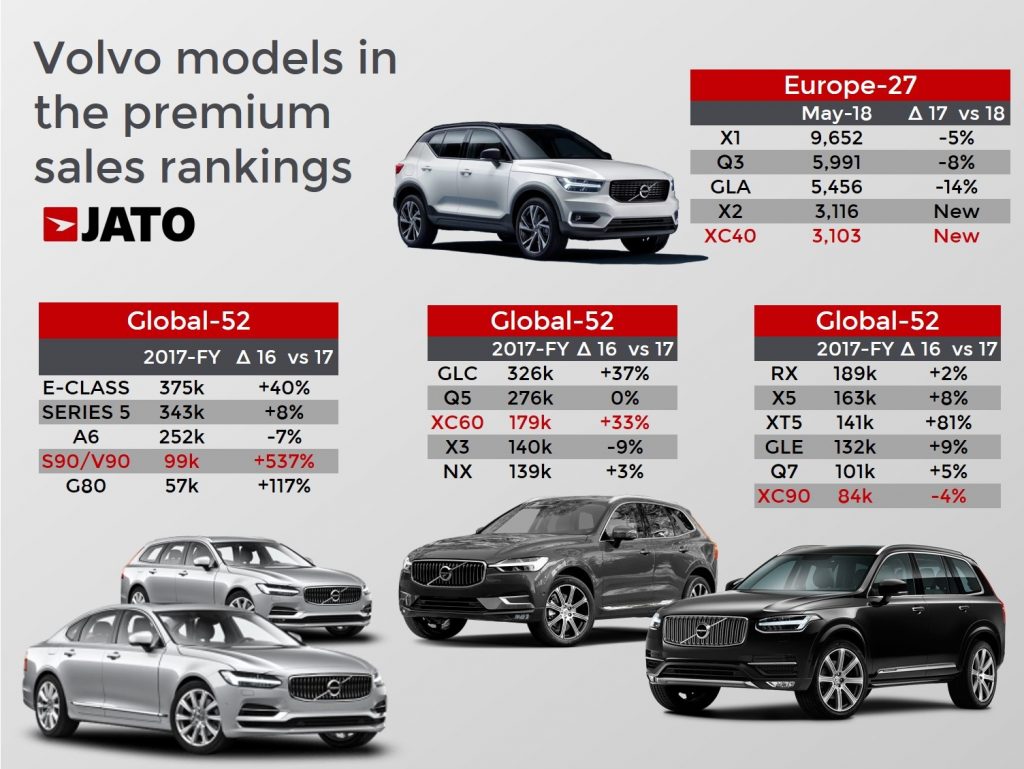 But the transformation of the brand was not limited to the top segments. In 2017, Volvo presented the second generation XC60 in order to maintain its strong position in the premium midsize SUV segment. The new XC60 was unveiled in Geneva 2017 and even if it hasn’t been able to outsell its predecessor, it continues to be one of the top-selling premium SUVs. Volvo global sales in 2017 totalled 572,000 units, up by 7%. 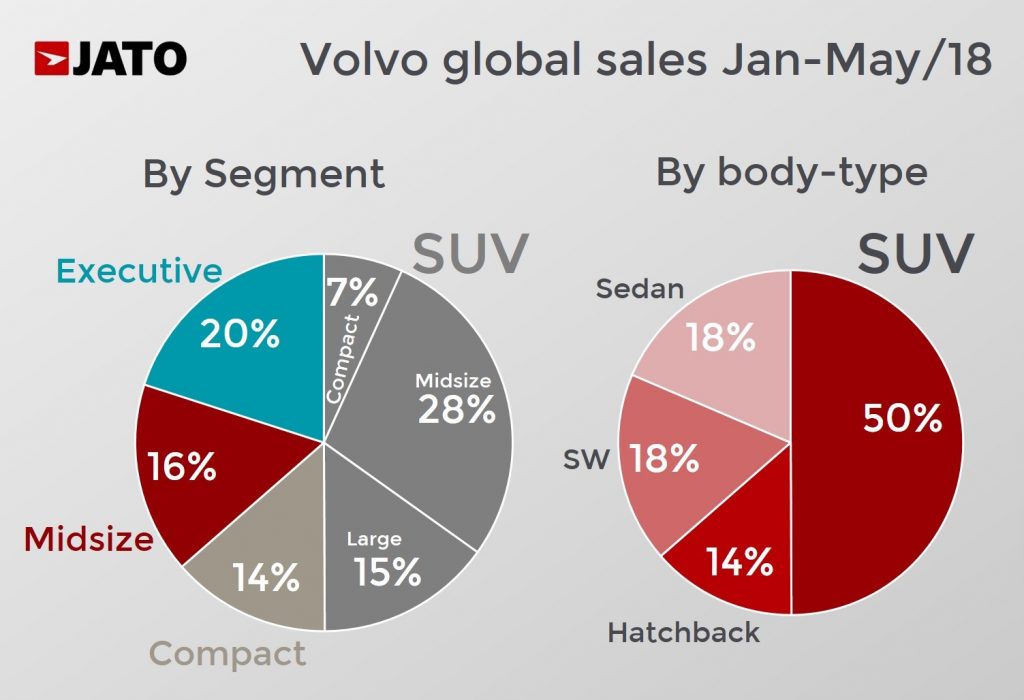 Then came the first compact SUV of the brand. The Volvo XC40 was presented in Frankfurt in 2017 and is already a big success with more than 17,000 units sold between January and May 2018. This model is set to become one of Volvo’s top 3 best-selling models by the end of this year. Volvo presented the Polestar 1 in China in October 2017, when it became the brand’s first sports car. The transformation is almost complete following the presentation of the all-new Volvo V60 in Geneva 2018 and the new US-made Volvo S60 in June 2018.

Based on these results Volvo is heading towards another record this year, which is due to the consistency of its product launches. Volvo aims to sell 800,000 units by 2020, which is certainly a high target that will only be achieved if the current range continues to post strong growth, and the latest S60/V60 gain more traction in a declining segment. Even if they don’t meet this target, Volvo is now a strong alternative to Audi, BMW and Mercedes, thanks to appealing cars that are no longer only recognized for their safety features.