The European automotive industry recorded a healthy start to 2018, with volume up by 7.1% as 1.28 million cars were registered, 84,000 more than in January 2017. This came as a result of double-digit growth in key markets such as Germany, Spain, the Netherlands, Belgium and Poland. The UK market also improved in January, recording its lowest decrease since June 2017, although this had little impact on the overall state of the European car market.

These impressive results mark the highest January volume since 2008, as well as the highest monthly percentage growth since May 2017. “We are seeing good indicators of what is expected to follow in the coming months,” commented Felipe Munoz, JATO’s Global Analyst. “It’s too early to conclude, but January is certainly a more positive sign than was expected.”

Europe’s largest markets all posted an increase in registrations, with the exception of the UK. Germany maintained its dominance as Europe’s largest market with nearly 270,000 registrations, however, Spain recorded a larger increase of 22.7%, compared to Germany’s 11.6%. Of the 27 markets analysed it was the Eastern European region that registered the most growth, with Romania recording the largest year on year growth, with a significant 66.4% increase, followed by Slovakia at 47% and Hungary at 38.6%. Meanwhile, Norway posted the largest decrease with a 29.2% decline, which was significantly ahead of the UK in second place, which posted a 6.3% decline. 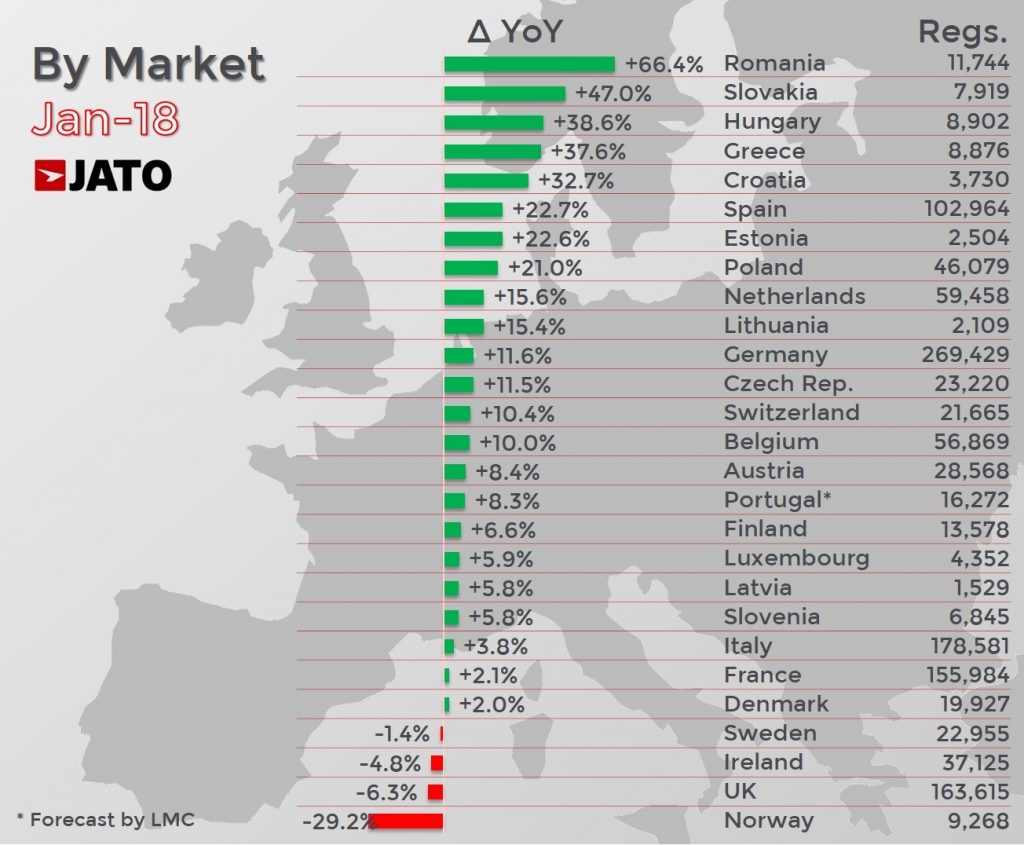 The diesel decline that began in 2017 looks set to continue in 2018, with January’s results suggesting that consumers are continuing to shift away from the fuel towards gasoline vehicles and AFVs. Data for 17 of the 27 European markets showed that diesel car registrations fell by 12.5% in January 2018, recording just 40.6% of market share. In turn, demand for gasoline cars soared by 18.8% to 535,800 units, recording 52.2% of market share. This represents a 7.6 percentage points decline for diesel and a 6.5 percentage points increase for gasoline in just one year. Meanwhile, AFV registrations also benefitted from diesel’s demise, growing by 28.2% to 57,000 units, a record market share of 5.5%.

“This drop in demand for diesel was generated by negative results for Germany and other key markets. In Germany, diesel registrations were down by 17.6%, followed by France and the UK, where registrations for diesels were down by 12.1% and 25.6% respectively. As the public perception of diesel changes, customers are increasingly looking to gasoline and AFVs,” states Munoz.

Whilst diesel cars continued to decline in Europe, SUVs continued to boom, with the segment’s volume up by 26.2% to 428,300 units, a record level for January. This meant that one in every three cars registered in January 2018 was an SUV. The small SUV sub-segment saw registrations grow by 39.7% in January, boosted by the arrival of VW Group to the market, which posted an increase of 123.1% in small SUV registrations. PSA also posted a large increase of 54.2% and outsold Renault-Nissan to become the top-seller in the sub-segment. The executive segment also performed well in January, posting an increase of 28.6%, in part due to growth at BMW.

VW Group performed well in January, as demand for its latest SUV models allowed it to offset the impact of the diesel crisis. The growth was driven by Porsche, as well as Skoda and Seat, which were both up by 22% and 21%, respectively. Ford posted the largest market share loss due to declines in the MPV segment, a key market for the group. Daimler and FCA also posted declines in market share.

The VW Golf once again came out on top as Europe’s most popular model. The strong results from its electric and gasoline versions meant the model posted a 15% volume increase and recorded 17,300 more registrations than the second-placed Ford Fiesta. The Tiguan was also the best-selling SUV for January, despite posting a volume decline. Conversely, it was a bad month for Opel/Vauxhall, with the Astra and Corsa models posting volume decreases of 32% and 19%, respectively. 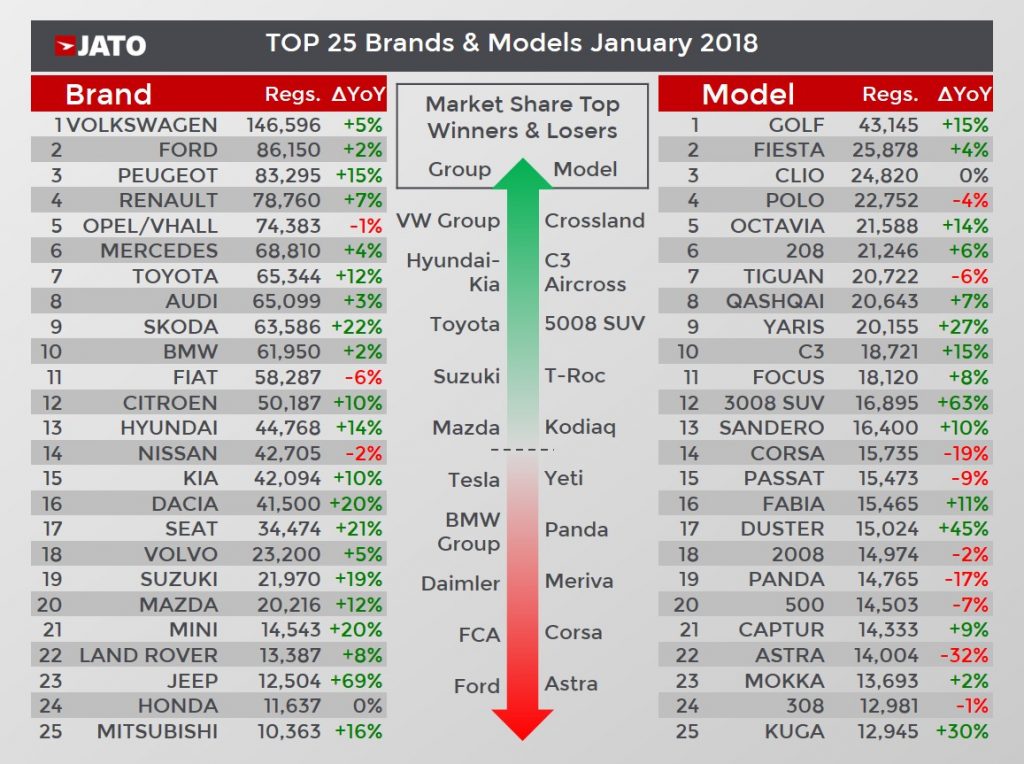 January showed signs of improvement for the Toyota Yaris as its volume was up by 27% thanks to the success of its hybrid model, which became the best-selling hybrid car in Europe. Other models that saw increased registrations in January were the Peugeot 3008 SUV, Dacia Duster, Ford Kuga, Toyota C-HR, BMW 5-Series, Fiat 500X, Nissan Micra, Audi Q2, Mazda CX-5 and Opel/Vauxhall Insignia.