What’s the matter with the Chinese car market?

Over the past few years we have seen global car sales grow, and it’s China that is responsible for most of that growth. Not only is it the biggest market in the world, but it is also the main source of revenue for most car manufacturers. In our six months review, China counted for almost 28% of the world’s passenger cars and light commercial vehicle sales. 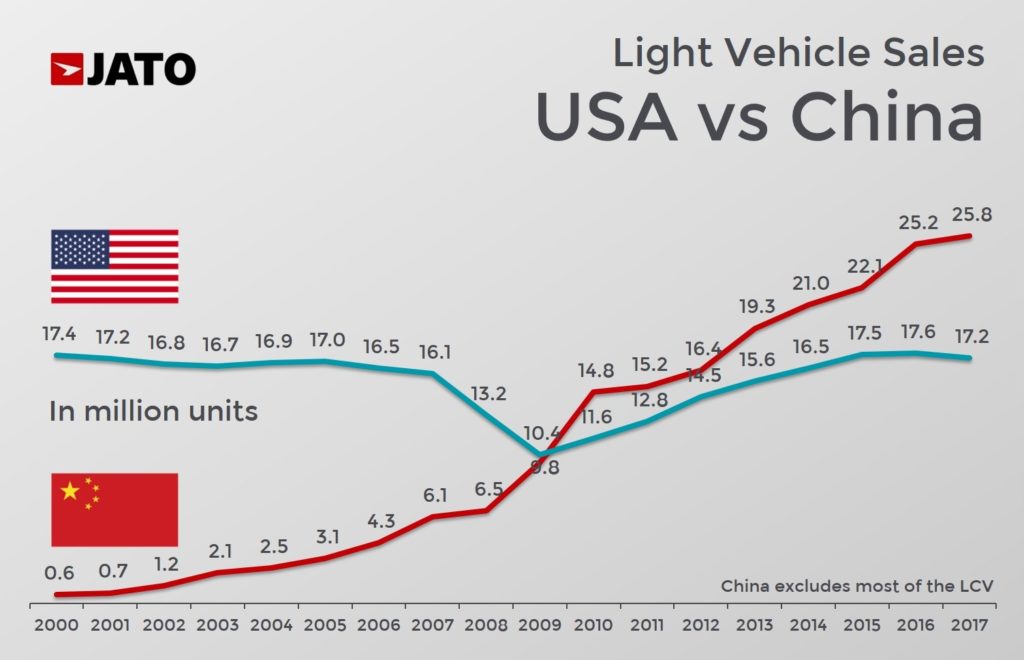 As more than one in four of the vehicles sold in the world remains in China, it is crucial to understand exactly what happens over there. Any change in supply or demand, or any new regulation, is going to have a national, regional and global impact on the industry. Its power is not only based on its volume, but also on its recent goal to become a referent market for the development of new technologies and mobility solutions. 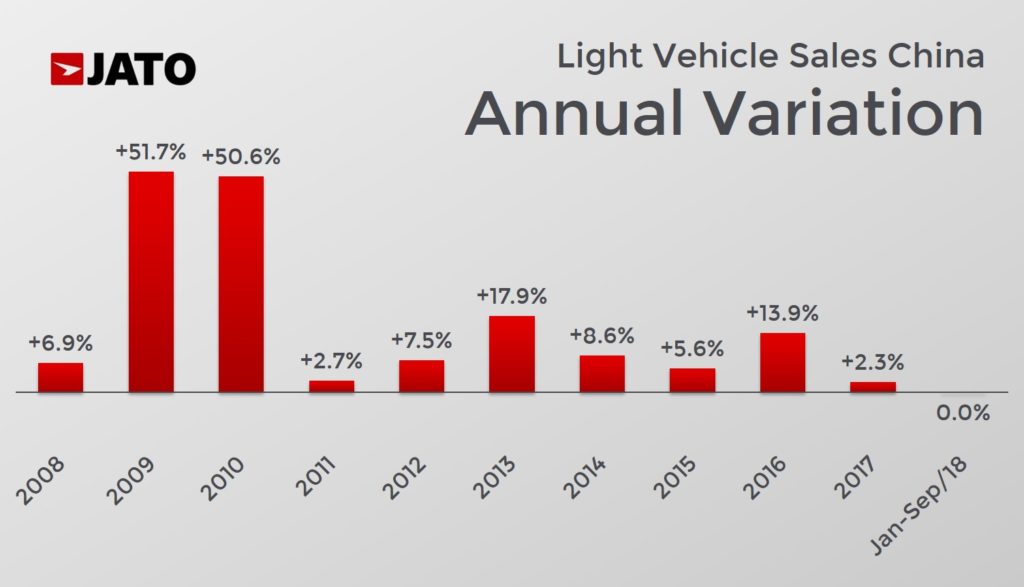 Back in 2010, China became the world’s largest car market, outselling the US after many years of double-digit growth. In 2000, the American car market was 29 times bigger than the Chinese, but just five years later this gap narrowed drastically, with the US market only 4 times larger than the Chinese. 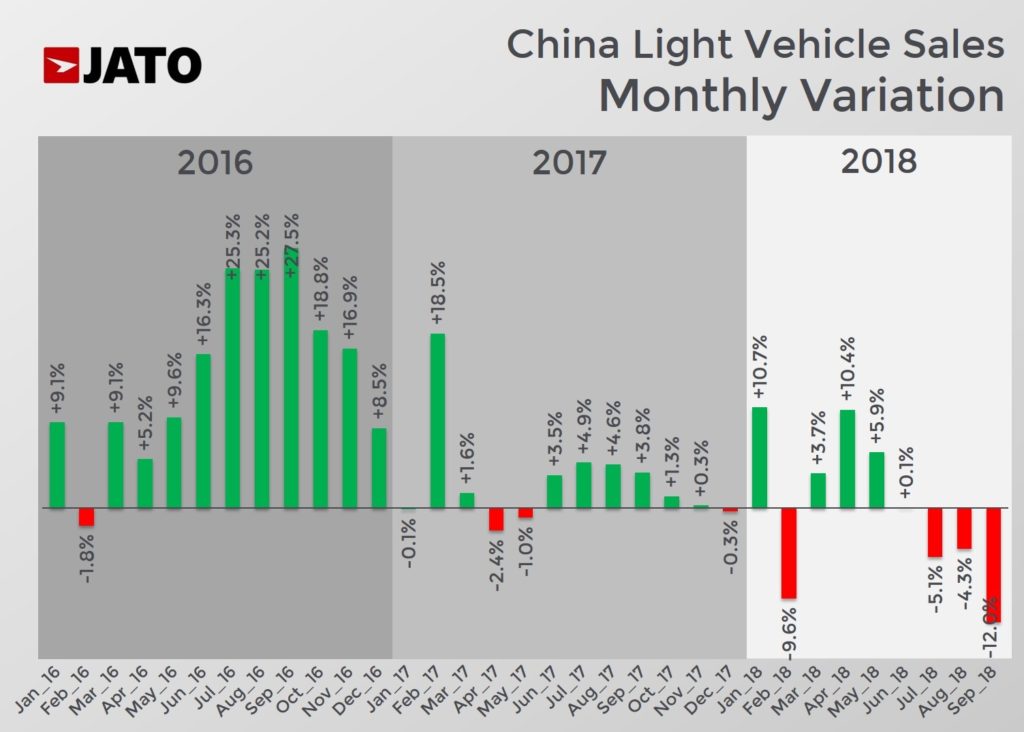 Last year our data (which excludes a big part of the LCV segment) showed total sales of 25.8 million units, or 8.6 million units more than the total sold in the USA. As expected, this strong growth has slowed down over time.

The latest information indicates that Chinese car sales remained stable at 17.94 million units, which is 6,000 units less than in the same period of last year. While this may only be a small drop, the fact that car sales in China are not showing growth is a big sign of how the industry will move from now on. It represents a big challenge for the growth plans of many car manufacturers who relied on Chinese demand for their global expansion. 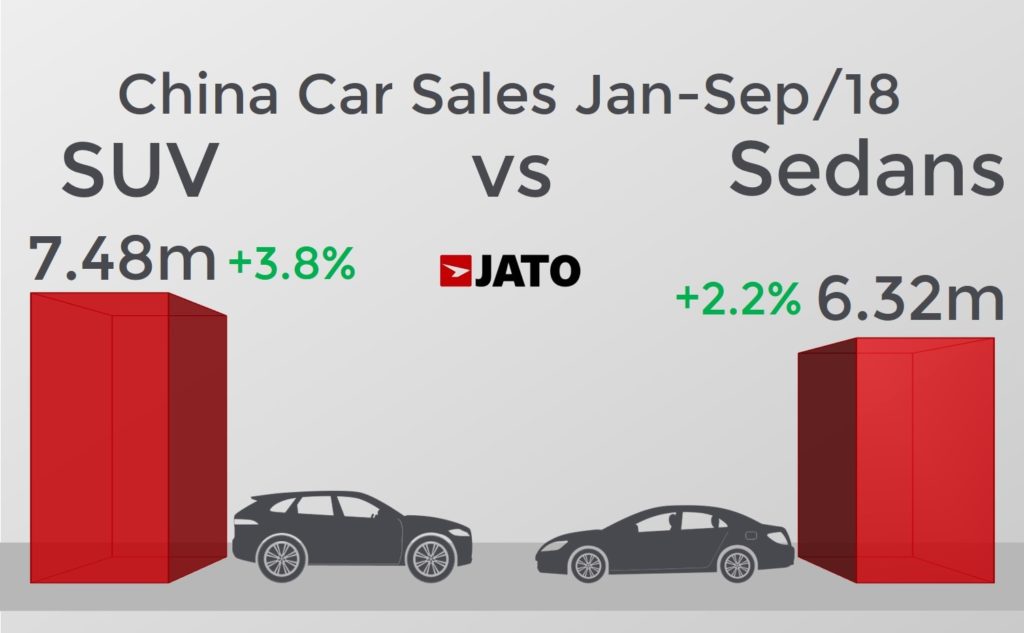 Despite the deteriorating situation, this is more likely to be an anomaly than a real signifier of a change in trend. China is still a growing economy –  and its population continues to move from the countryside to the cities. Many people don’t own a car yet and those remaining in the midsize and small cities still represent a good opportunity for growth for car manufacturers. In other words, the Chinese car market is not going to grow as rapidly as we have seen in the past, but consumers who are new to the market will still drive growth. 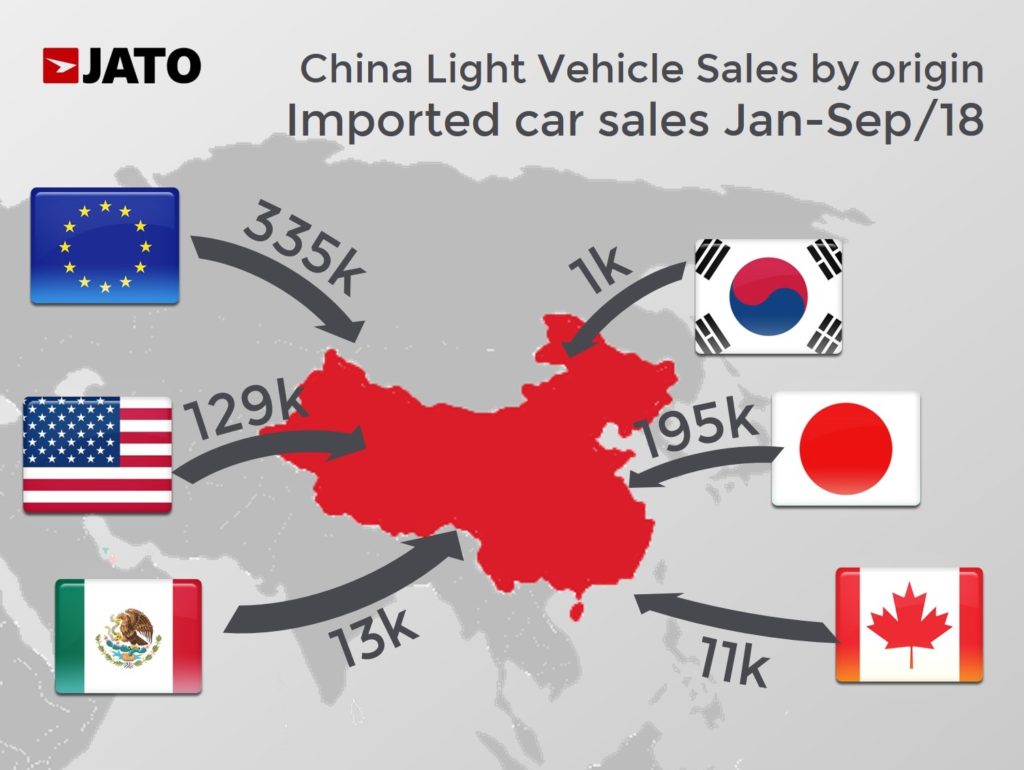 One of the main reasons for the slump in sales is the lack of incentives from the government. In the past few years, the Chinese authorities have boosted sales through purchase tax cuts, as seen in 2014 and 2016. This year there were rumours that there would be new cuts, which the government were quick to deny, implying they won’t be providing any such additional support. 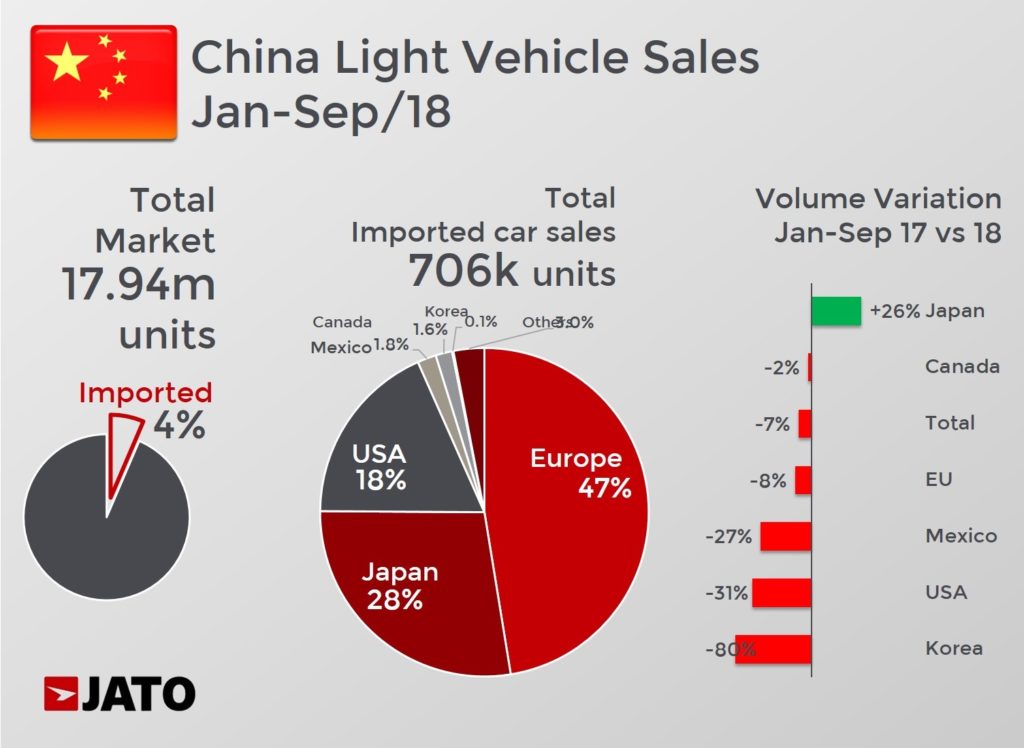 The lack of incentives is, of course, having a negative impact on the industry and puts more pressure on the market. This comes alongside a decline in consumer spending capabilities. Since 2014, the citizen financial leverage ratio (debt/savings) increased from 46% to 63%, meaning that consumers simply have less money to spend. This data was calculated by national resident total  debt/national resident total saving, and is coming from the Central Bank and People’s Bank of China. Rising debt and slower growth of household income are sparking concern about the impact on consumption and growth. 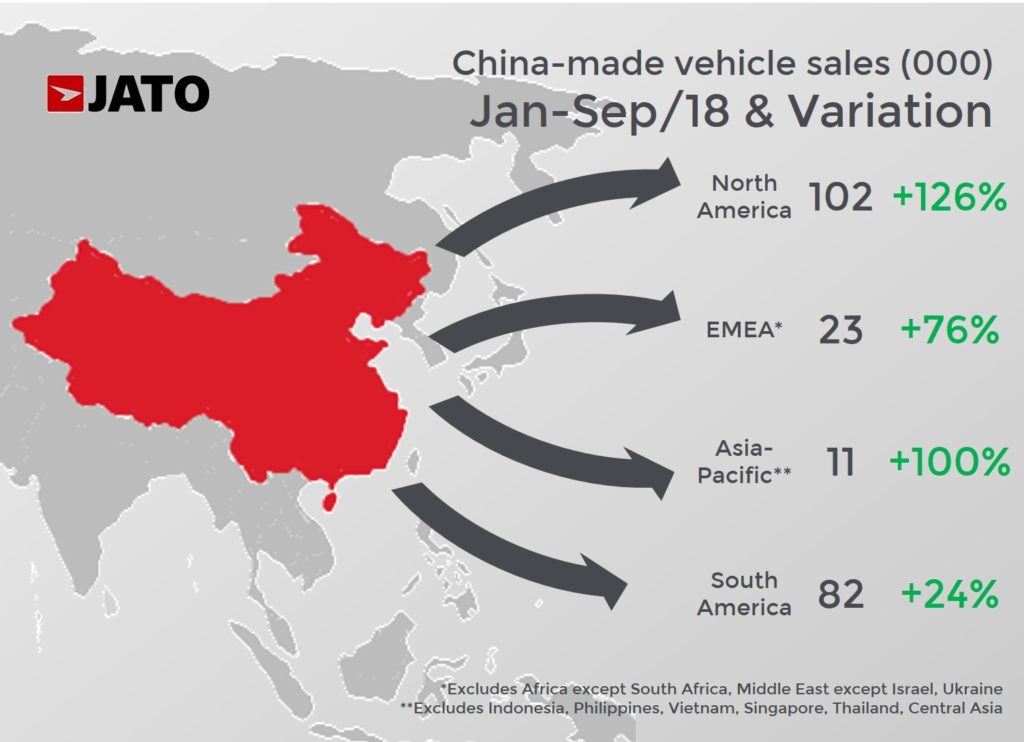 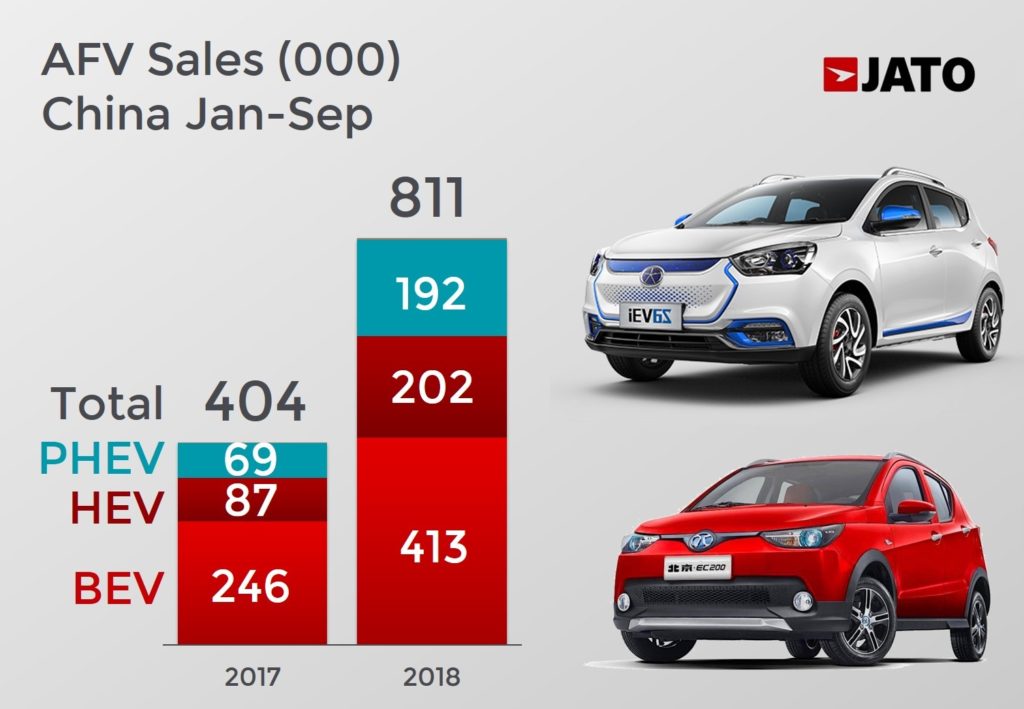 But what about the effect of the trade war and tariffs? While the Chinese government announced a reduction on import tariffs in the first half of this year, the expected positive effect of this has been somehow offset by higher tariffs on US-made cars as part of the trade war between the two countries. In fact, the sales of cars imported from the USA fell by 31% to only 129,000 vehicles. This was a bigger drop than that of European-made cars, which were down by 8%. Meanwhile, Japanese-made car sales increased by 26% to 195,400 units. 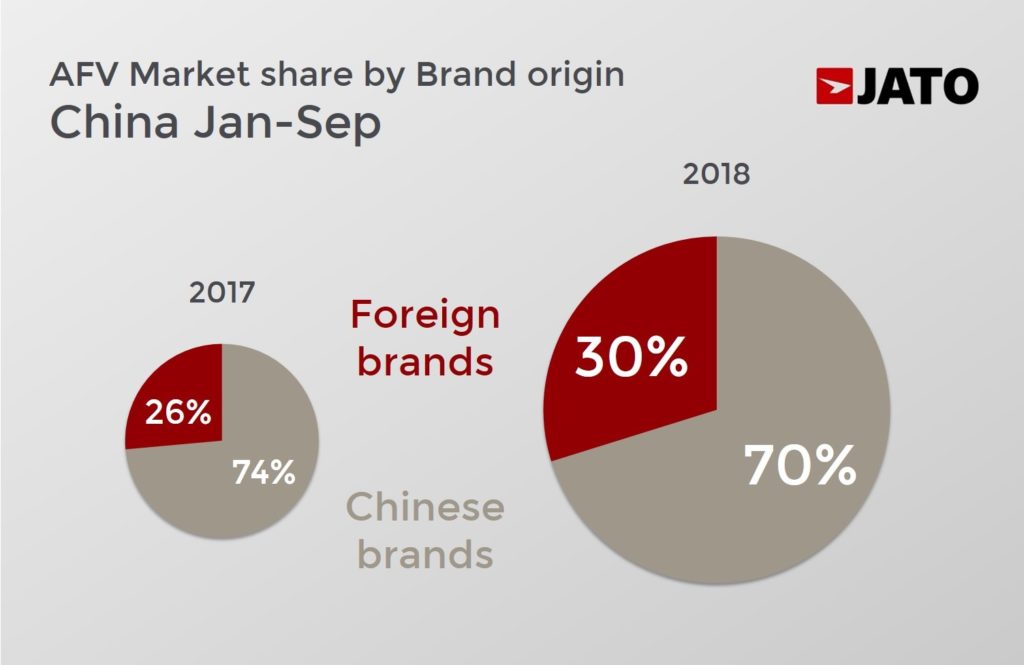 And what about AFVs? Their demand is soaring rapidly, with sales figures this year (up to September) reaching almost 811,000 units and volume more than doubling (+101%) mostly because of the strong growth displayed by the hybrids and plug-in hybrid cars. However, pure electric cars continue to dominate this segment, counting for 51% of the total. The Chinese AFV market is more or less the same size as the whole Australian vehicle market, and bigger than the Indonesian, Thai and Argentinean markets. As they reach a record share of 4.5%, the industry wonders about their future growth, considering the fact that the government is set to axe the incentives in 2020. The question now is whether car manufacturers can find another way to compete against ICE cars without government support?