These were the world’s top selling cars through April 2018

Global vehicle sales grew by 3.4% between January and April 2018 to 28.8 million units. The data for 53 markets from JATO (around 90% of the global total) indicates that the growth pace continues thanks to the positive economic indicators and good mood among consumers in most of the key markets. 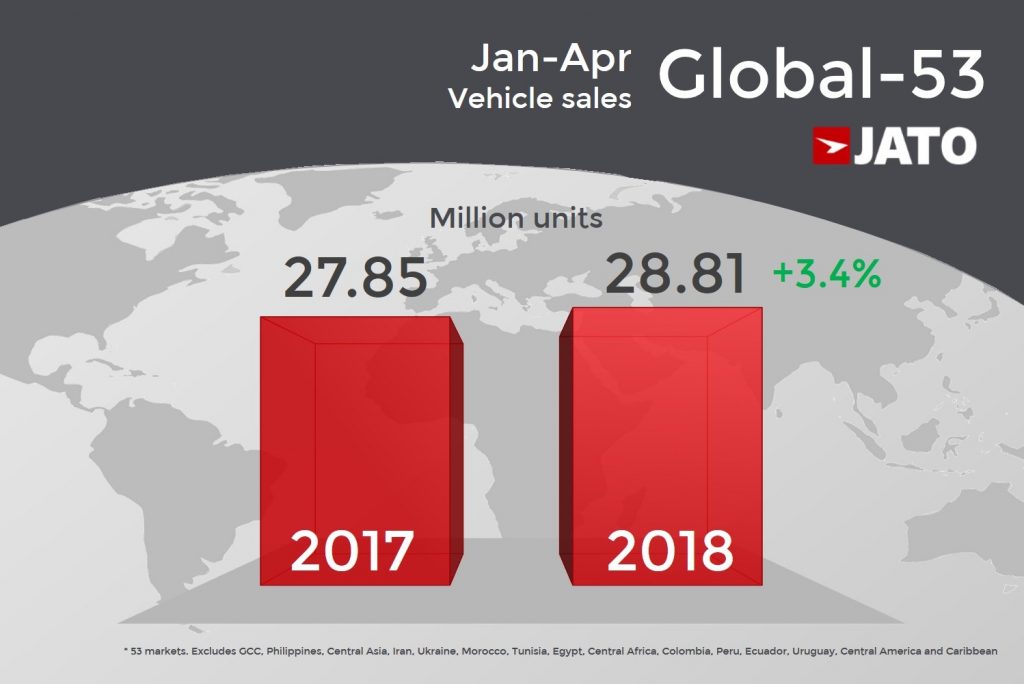 Even if almost two in three of the vehicles were sold in China, USA and Europe, most of the growth was driven by emerging countries like India, Brazil and Russia. All three of these markets posted double-digit growth, with India reducing the gap with Japan, and Brazil and Russia leaving behind their crisis years. According to our partner LMC Automotive, Indian vehicle sales are expected to overtake those in Japan by 2021. 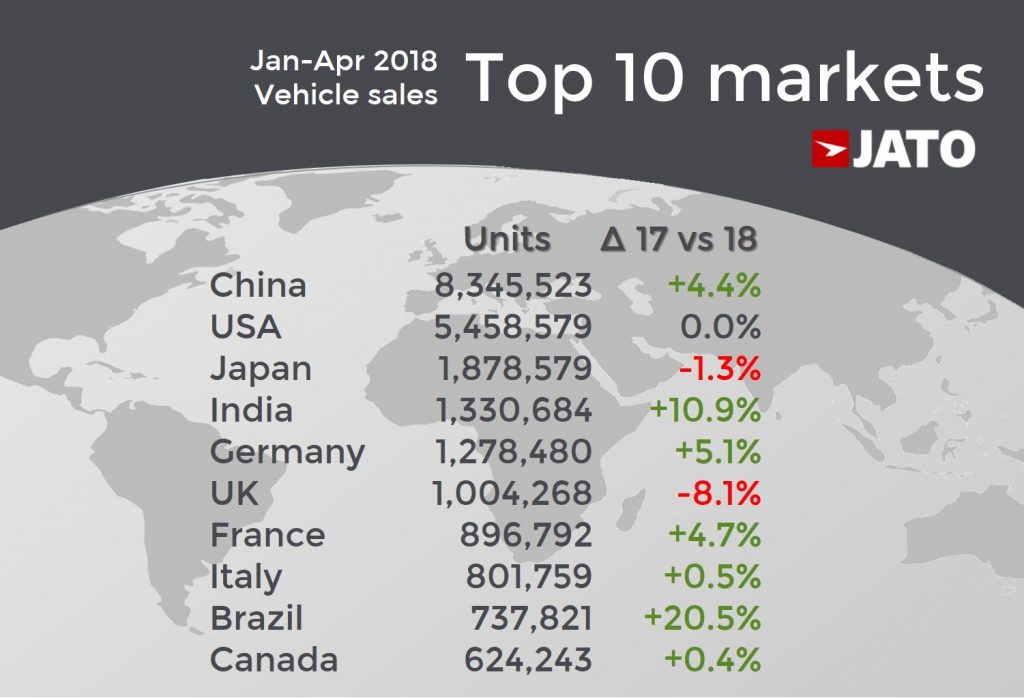 As expected, SUVs led global growth with their market share jumping from 30.9% in Jan-Apr/17 to 34.2% during the first four months of this year. This means that SUV global sales grew by 14.8% to a record 9.86 million units. Forty markets posted double-digit growth in SUV sales, while the only markets where demand fell were Vietnam, Japan and Norway. 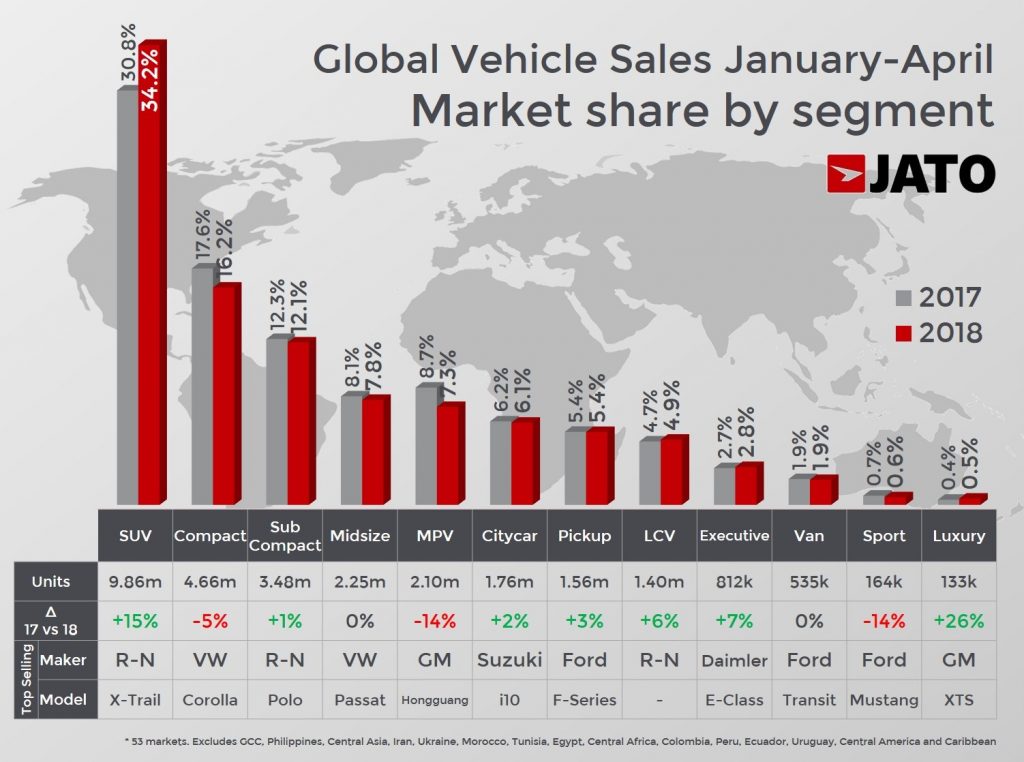 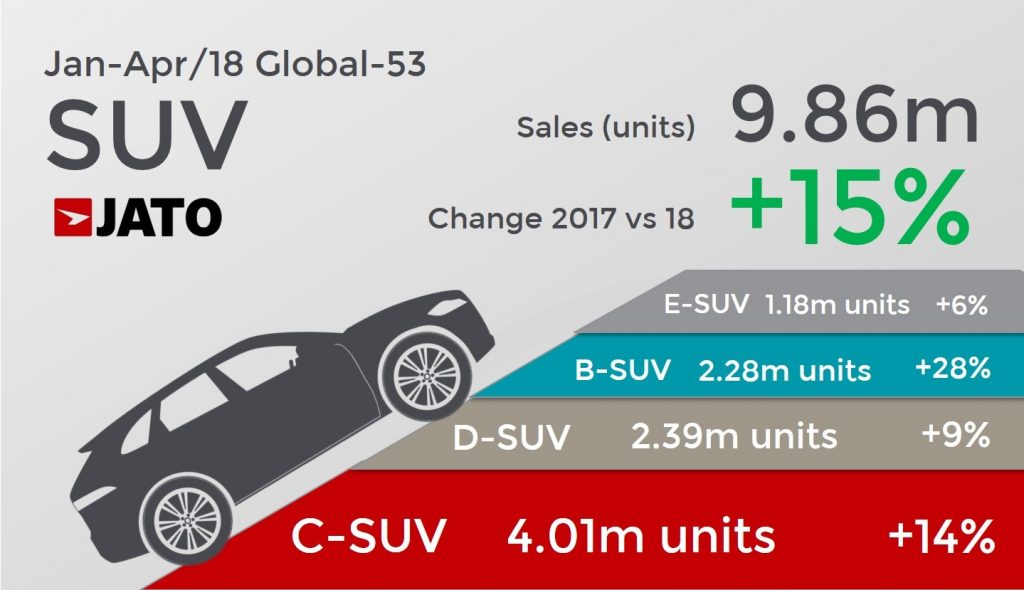 With the exception of light commercial vehicles, executive and luxury sedans, all of the other segments lost market share. MPVs recorded the biggest drop with sales plunging by 13.6% to 2.1 million units, and market share decreasing from 8.7% in Jan-Apr/17 to 7.3% one year later. Despite their strong presence in some Asian markets, consumers continue to avoid these vehicles and buy SUVs. 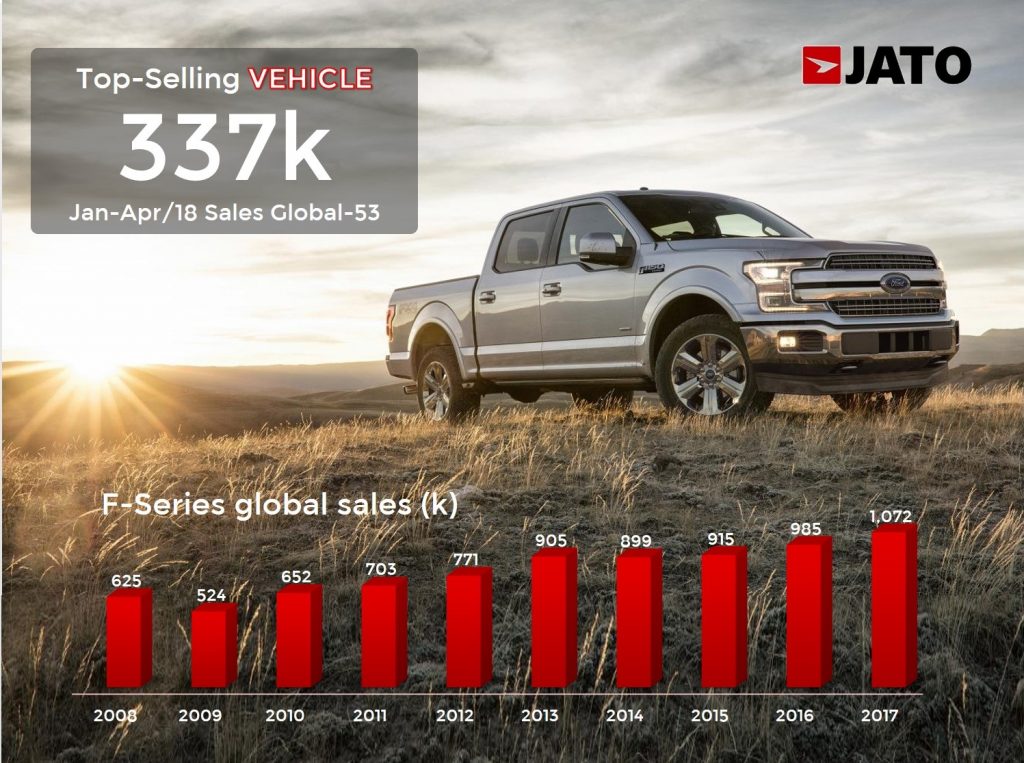 The Ford F-Series (F-150, 250, 350) continues to be the world’s best-selling vehicle thanks to its strong position in the USA, where it retained 85% of its volume. The Toyota Corolla (sedan version only) came in at a close second as its sales increased by 3.3% due to very good results in China (+19%). The Volkswagen Golf performed well following the 20% increase in Germany, which became its biggest market ahead of China. The Honda Civic outsold the Nissan X-Trail and became the 4th best-selling vehicle, the new generation is already having an impact, while the SUV is already 5 years old. In fact, it is not clear whether the X-Trail/Rogue will keep its place as the world’s best-selling SUV by the end of this year, as the Toyota Rav4 and Volkswagen Tiguan are closing in. 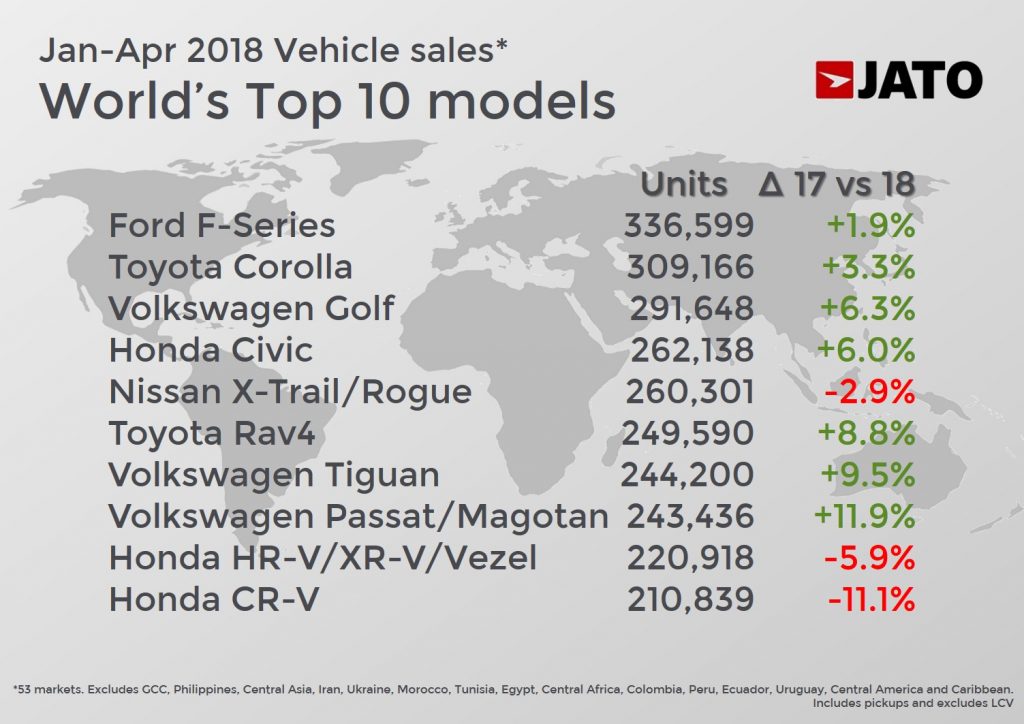 However, there’s still a chance that the Tiguan could lead the SUV rankings, as the Rav4 will soon undergo a model changeover which could result in the usual impact on sales during its first months. The Volkswagen Passat (also known as Magotan in China) has entered the top 10, recording the highest percentage variation among the top 10 models. The 9th and 10th positions were occupied by two Hondas, the HR-V (aka XR-V and Vezel in other markets) and the CR-V. The HR-V is entering the decline phase of its commercial life (it was introduced in 2015), while the CR-V is experiencing the impact of a model changeover. 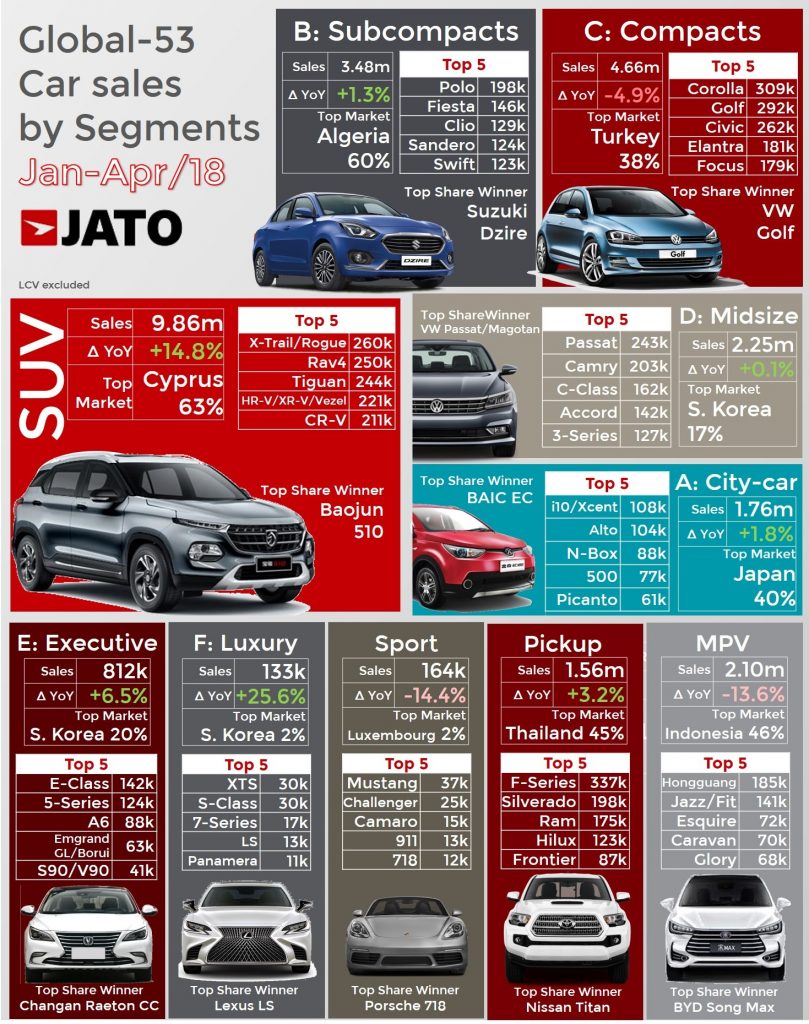 Outside the top 10 it is important to mention the good progress made by the Nissan Qashqai (aka Rogue Sport in USA), Baojun 510 (the second best-selling car in China), Mazda CX-5, Chevrolet Equinox, Jeep Compass, Mercedes GLC/Coupe, Jeep Wrangler, Ford Ecosport and Chevrolet Cavalier. Among the latest launches, Suzuki sold more than 74,000 units of the Dzire, Changan sold 72,500 units of the compact SUV CS55; BYD sold 54,600 of the Song Max (large MPV), Volkswagen sold 54,400 units of the Atlas/Teramont, and Hyundai sold 52,600 units of the Kona (aka Encino in China). 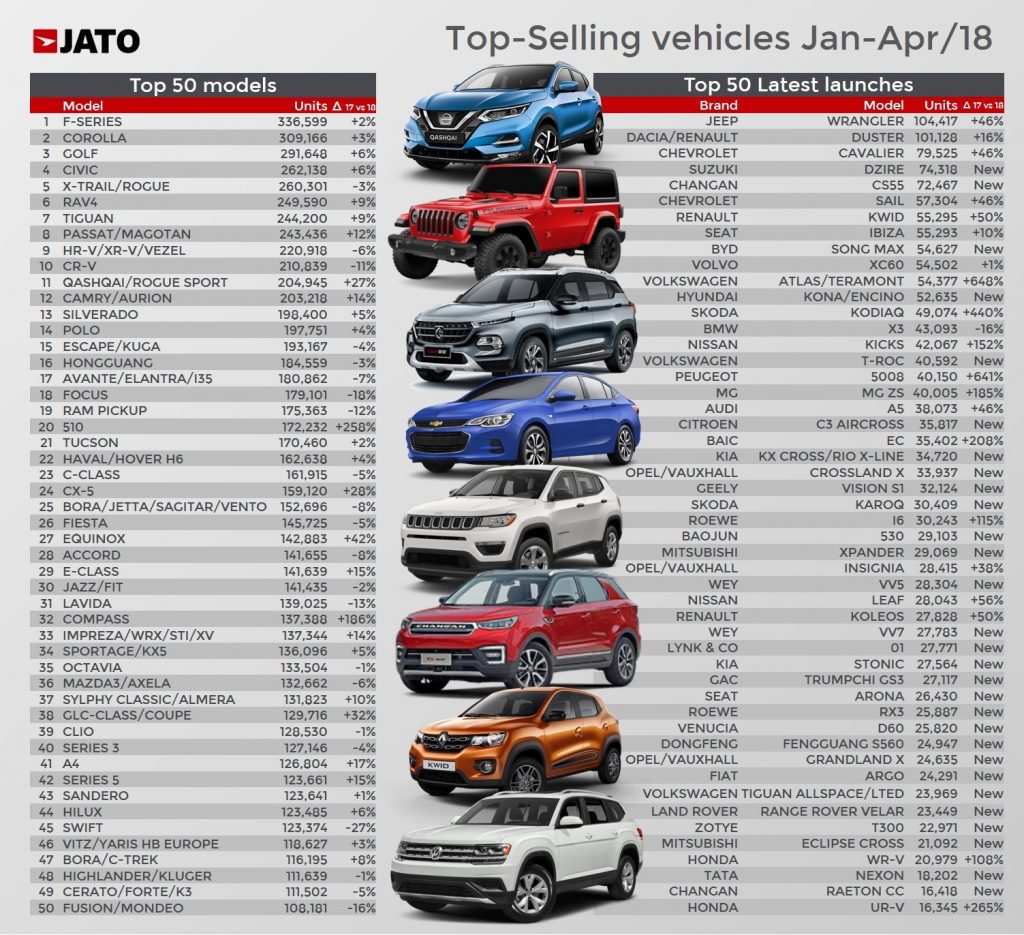