On March 17th, 2016, the U.S. Department of Transportation’s National Highway Traffic Safety Administration (NHTSA) and the Insurance Institute for Highway Safety (IIHS) announced a commitment by automakers, representing more than 99 percent of U.S. automobile sales volume, to make automatic emergency braking (AEB) technology a standard feature on all new cars by 2022 and on all new trucks by 2025.

Automatic emergency braking (AEB) systems detect an impending forward crash with another vehicle in time to avoid or mitigate a crash. These systems first alert the driver to take corrective action before taking measures if the driver’s response is not sufficient. 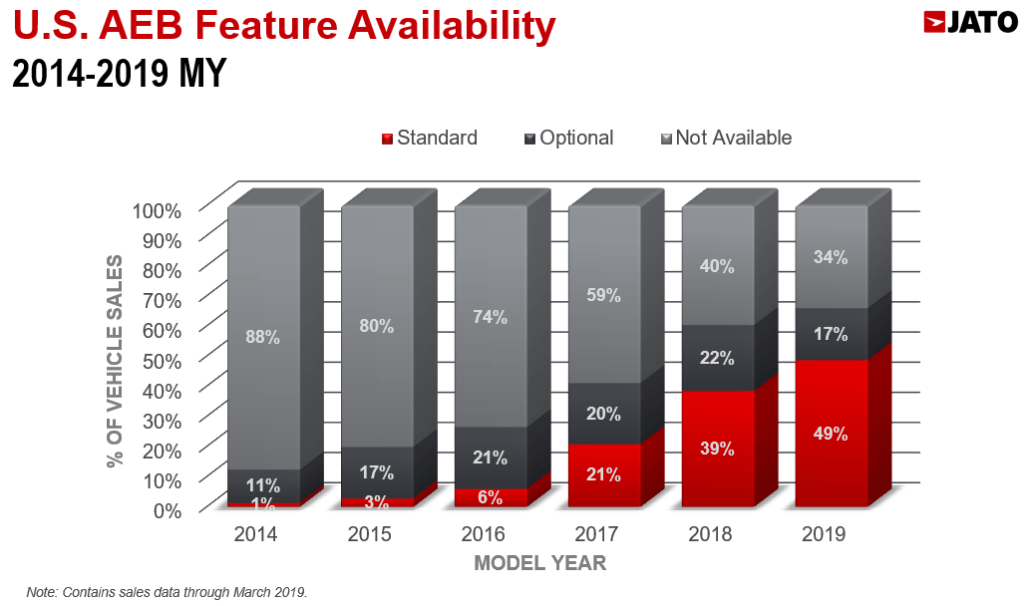 While some questioned how serious manufacturers would take this pledge, the early returns seem promising. Standard AEB sales have increased by 33-percentage points after only two model years (6% standard in 2016 MY vs. 39% in 2018 MY). Standard fitment rate continues to rise with the 2019 MY as 49% of vehicles sold, as of March 2019, have AEB technology as a standard feature.

Even though 100% standard fitment for autonomous emergency braking is the ultimate goal, it’s important to also look at the total availability (standard plus optional availability). It’s true there are costs when a manufacturer chooses to make an optional feature standard, however it is more costly to add new technology to a vehicle, especially mid-generation.