All the Big 5 European Markets experienced growth, as SUV’s continued to dominate in April

Led by strong growth in Spain and Italy, new car registrations in Europe’s Big 5 markets grew by 8.6% to 958,400 units in April 2016.  After the UK’s traditional volume peak in March, which saw registrations rise to 1.36 million, April produced further gains across the top five European markets with SUVs driving higher volume and counting for 24.4% and 24.9% of April’s and YTD’s totals respectively. The Seasonally Adjusted Annual Rate (SAAR) came in at 11.35 million, up from March registrations of 11.04 million and significantly higher than the 10.48 million in April 2015.

Germany continued to lead the market, with volume up by 8.4% at 315,900 units, accounting for a third of the Big 5’s total. After a relatively flat March, April saw registrations grow healthily, bringing the YTD total to 1.11 million units, up by 5.6% over January-April 2015. Impressively, April’s volume for Germany was the highest since 2009. The UK also saw positive growth – despite only seeing a 2.0% rise on April 2015, last month was the best April for UK car registrations for a decade. The UK total was 7,000 units higher than the total recorded in France, where the registrations advanced by 7.1% at 182,800 vehicles – the best April result in France since 2010. However, the largest growth figures were recorded in Italy and Spain, where April’s volumes grew by 12.3% and 20.7% respectively. While Italy moderated its growth, after an 18% rise in January, followed by 28% in February and 18% in March, Spain returned to positive growth after a 1% decrease posted in March. 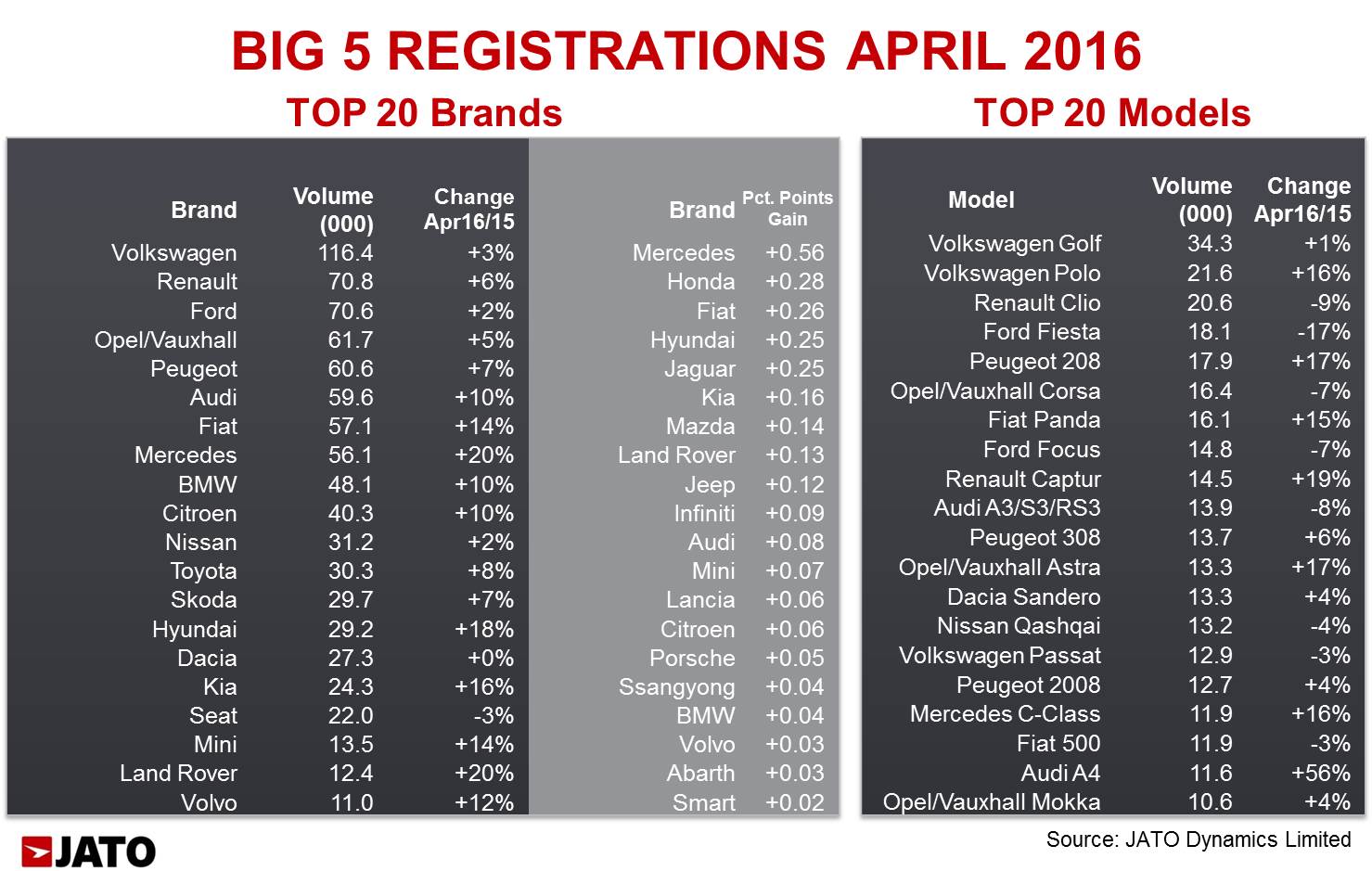 Volkswagen led the brand leader board, recording 12.2% market share at 116,400 units. However, its volume grew by only 3.1% over April 2015, leading to a market share loss of 0.66 percentage points compared to April 2015 – the largest market share fall of all the brands. The brand posted a strong increase in Spain (+31%), but lost market share in Italy (+10%), Germany (+3%) and France (+1%), and recorded a significant sales drop in the UK (-10%). Volkswagen’s SUV registrations counted for 8% of its total, with volume falling by 18%. However, the German brand was not the only one to lose market share. Volume at Renault, Ford, Opel/Vauxhall and Peugeot grew less than the market’s average change, as their SUV registrations growth (+32%) was offset by the decline on their subcompact volume (-6%).

With only two exceptions, all segments recorded market share losses, with the subcompacts losing most ground, recording 21.7% market share (vs. 22.9% in April 2015). This segment, the second largest in the Big 5, was negatively affected by the growth in popularity of SUVs, as volume dropped off 9% at Renault and 17% at Ford. The market share decline posted by the subcompacts, MPVs, compacts, city-cars and Vans was exactly the same as the percentage points gained by SUVs, up by 2.62 points from 21.7% market share in April 2015 to 24.4% one year later. The fastest growing segment in Europe was led by Nissan, although they only grew by 3%. In contrast, Renault’s registrations grew by an impressive 83%, thanks to the success of the Captur and Kadjar. As a result of the success of the new Q7, Audi was able to outsell Peugeot, and become the third best-selling brand in the SUV ranking. Ford, Mercedes, Hyundai, Kia and Fiat were the other big winners.

“Last month was the second best April of the last ten years,” commented Felipe Munoz, Global Automotive Analyst at JATO Dynamics.” While Germany, France and the UK are reaching their sales peak, further growth is expected in Italy and Spain. Unlike the circumstances of a decade ago, the growth is largely driven by the outstanding expansion of the SUV segment. The appeal of SUVs continues to gain further momentum at the expense of more traditional models,” concluded Munoz.