Global car sales up by 2.4% in 2017 due to soaring demand in Europe, Asia-Pacific and Latin America

The automotive industry grew in 2017, with 86.05 million units (LCVs and passenger cars) sold according to data released today by JATO Dynamics. This is a significant 2.05 million more than in 2016 and represents a 2.4% increase on 2016. “The automotive market performed well in 2017, with established economies maintaining growth, whilst developing markets like Russia and Brazil returned to growth following declines last year,” commented Felipe Munoz, JATO’s Global Analyst.

SUVs contributed significantly to the automotive industry’s strong performance, accounting for the largest market share in China, North America and Europe (the three largest regions), yet were not as popular in the three smallest regions – Asia-Pacific, Japan and South Korea and Latin America. The subcompact was the most popular segment in Asia-Pacific and Latin America, whilst city-cars secured the largest market share in Japan, demonstrating that there is still scope for the SUV to grow as its popularity spreads.

Europe, Asia-Pacific (excluding China, Japan and South Korea) and, notably Latin America were the key drivers of growth in 2017. Double-digit increases in 13 markets, including Russia, Thailand and Argentina, offset declines in significant markets such as the US, UK, Mexico and South Korea, and slowing growth in China. The Asia-Pacific market (excluding China, Japan and South Korea), was bolstered by increased sales in India, Thailand, New Zealand and Singapore, whilst the Latin American region benefited from the improved economic situation in Brazil. 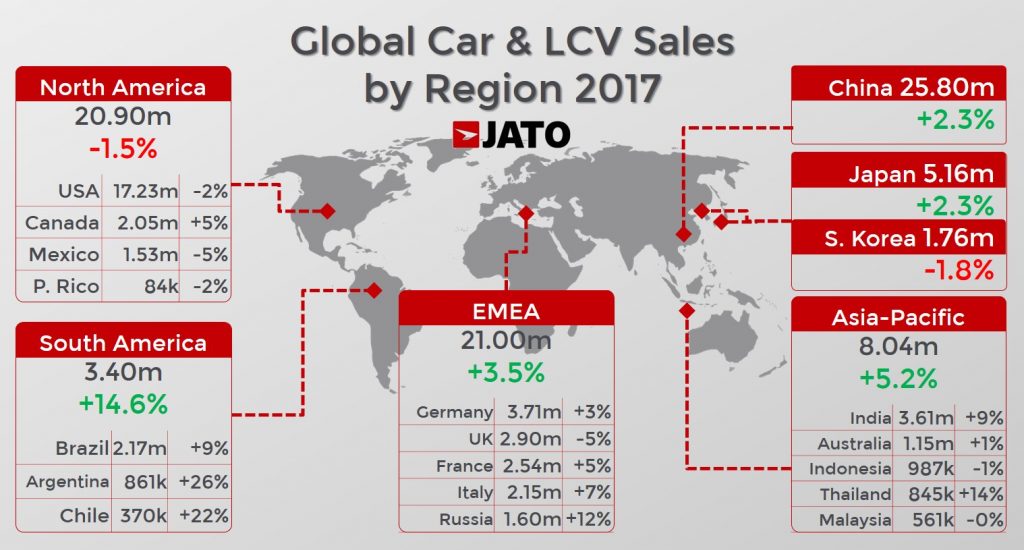 Brazil contributed significantly to the industry’s growth, posting a 9.4% volume increase in sales. India continued its rapid growth trajectory, with the country posting an increase of 8.8% meaning it could soon overtake Germany, which grew by a modest 2.8%. As a result, India could soon leapfrog Germany to take the position of the fourth largest automotive market.

“The results in 2017 show that despite the crisis with the diesel fuel type and localised issues such as Brexit causing European uncertainty, the automotive market as a whole is continuing to grow. It will be interesting to see how the role of the emerging markets increases in importance, with India projected to overtake Germany as the fourth largest car market globally, and Latin America showing positive signs,” Munoz continued.

Compact SUVs accounted for almost 40% of total SUV sales, growing by 9.2%, the lowest growth rate of all SUV sub-segments. Growth in the SUV segment was largely driven by the midsize SUV (D-SUV) sub-segment, which grew by 16.6%. Large SUVs (E-SUVs) posted a significant growth of 15.7%, with the North American region accounting for almost 2 in 3 vehicles sold, and volume in China doubling.

The continued dominance of the SUV meant sales of traditional segments continued to decline, with compact cars, midsize sedans, wagons and MPVs impacted the most. Compact cars registered 14.92 million sales, a decline of 4.5% on the previous year, which can be attributed to reduced demand in the big five markets, and in China which has succumbed to the SUV boom. City-car sales continued to grow, largely as a result of demand in the Japanese market which posted a 14.4% increase on last year, due to the dominance of kei-cars. Pickups also posted strong results, as demand in North America remained strong and their popularity increased in Europe, Latin America and the Asia-Pacific region. 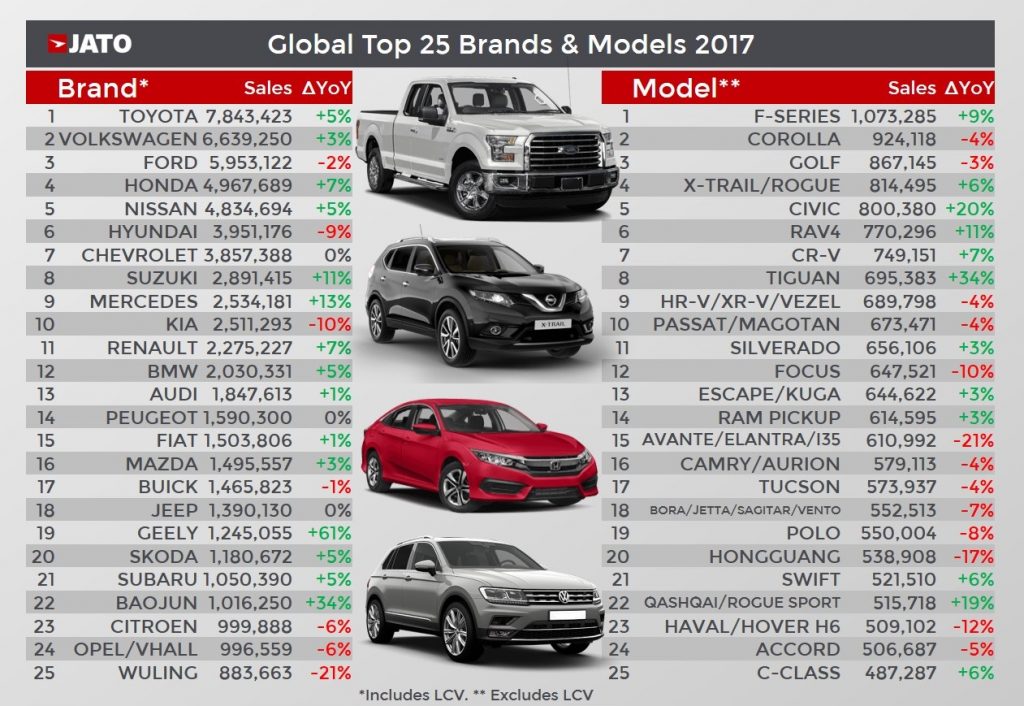 The Ford-F Series was once again the world’s best-selling car, as it further exerted its dominance over the Toyota Corolla, which came in second. As usual, the Ford-F Series took the top spot as a result of strong US demand, which accounted for 80% of its total volume.

The Nissan X-Trail/Rogue was the world’s best-selling SUV and the overall fourth best-selling vehicle, selling 814,000 units in 2017, an increase in volume of 6.5%. Honda and Volkswagen both had strong years, placing three models inside the world’s top ten. The performance of the Volkswagen Tiguan was also notable, with outstanding demand in China. Other notable performances were from the Baojun 510, Toyota C-HR, Geely Emgrand, the all-new Jeep Compass, the Peugeot 3008 SUV and the Chevrolet Cavalier which were all new launches that proved popular in 2017.

In terms of fuel types, estimated data shows that gasoline cars and LCVs continued to dominate the market in 2017, with 72.5% market share. AFVs showed strong growth, with a 27.7% increase which took its volume to 3.79 million units, and meant it had a market share of 4.4%, an increase of 0.9 percentage points when compared to 2016. The diesel fuel type declined by 3.7%, due to its strong dependence on the European region which accounted for 2 in 3 diesel cars sold in 2017, despite regulation on a national level aiming to reduce reliance on diesel vehicles. Outside of Europe, Thailand, New Zealand and South Korea all remain strong markets for diesels.

Japan is one of the largest and most significant markets for AFVs. However, Norway maintained its leading market share, accounting for 41.9% of AFVs sold, followed by Japan at 27.8% and Israel at 9.5%. Pure electric car and LCV sales totalled 668,000 units, an increase of 78.4%. Hybrids totalled 2.51 million units, a record, partly achieved due to strong growth in China, India and Europe. Plug-ins totalled 417,300 units, an increase of 62.5%, driven by China, USA and Japan.