The European car market recorded its highest Q1 performance since 2000, confirming that the industry is outperforming levels seen before the economic crisis. This comes despite car registrations falling by 5.2% in March, meaning that strong growth recorded in January and February was enough to compensate results for the quarter overall.

The UK market continued to falter in Q1, with volume falling by 12.4% to 718,500 units. 474,100 of these units were registered in March, marking the UK’s lowest March performance since 2014. Italian registrations also recorded a decline in Q1, with volume down 1.3% after a long period of growth. There were also falls in Norway, which posted the second biggest decline across all European markets of 11.3%, and Ireland, where the market was down by 5.3%. These were offset by strong performances in Spain, Poland, the Netherlands and the Eastern European region.

Felipe Munoz, JATO’s Global Analyst, commented: “This increase in registrations for Q1 2018 is an encouraging sign and indicates that the European car industry could continue to grow this year. However, the UK continues to hold back Europe and is hampering overall growth, reflected by its poor performance in March and for the quarter overall.” 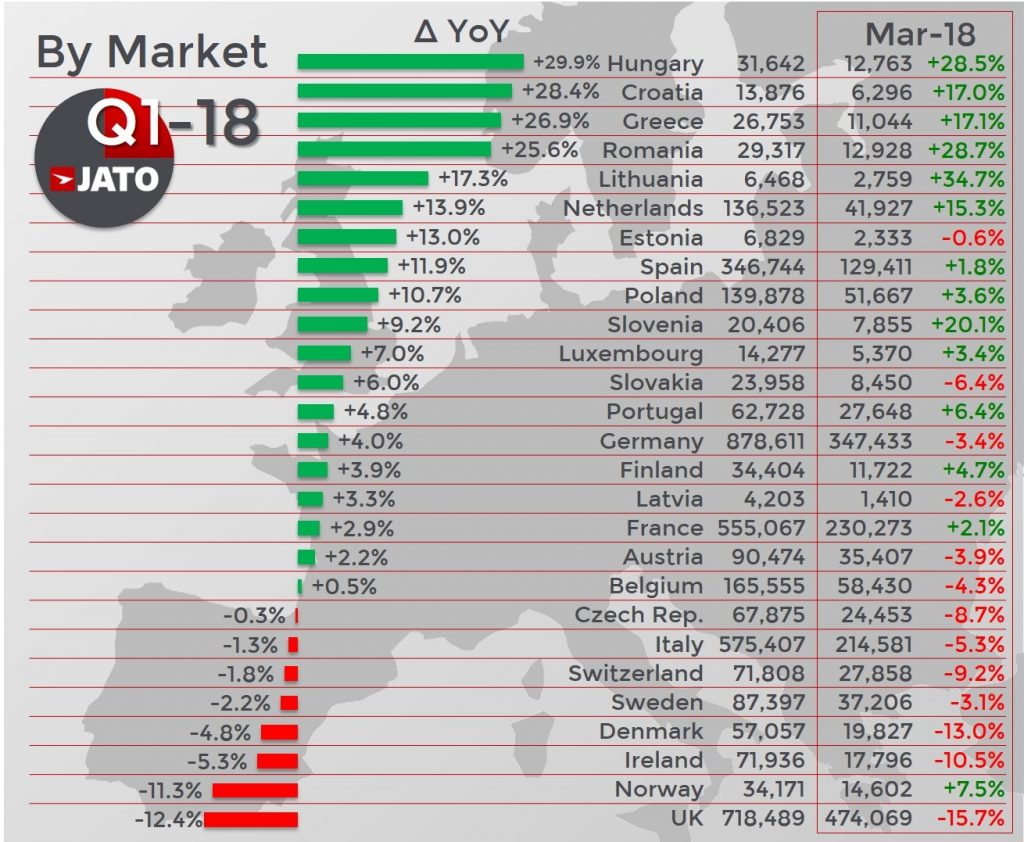 Results from Q1 show that consumers are continuing to shift away from diesel towards gasoline vehicles. Data for 18 of the 27 European markets showed that gasoline cars counted for 55% of registrations, whilst diesel cars continued to drop and counted for just 38%. Alternative Fuelled Vehicles continued their year-on-year growth and saw an increased volume of 23.4%. However, “the diesel decline isn’t having an impact on the popularity of Alternative Fuelled Vehicles – most consumers are turning towards gasoline cars rather than electric vehicles,” explained Munoz.

The SUV, executive and luxury car segments were the only ones to increase their volume in Q1 2018. SUVs once again continued to grow and made up one in every three cars registered in Europe, recording an increased volume of 20% for the quarter and 13.3% for March. The segment was boosted by double-digit growth in the small, compact and midsize SUV sub-segments, which were in part lifted by strong growth at PSA and the VW Group.

During Q1, MPVs market share decreased by two percentage points, going down to 6.1% – one of the lowest in the segment’s history. Despite new arrivals, the compact and subcompact segments also recorded big market share losses in Q1, as they couldn’t compete with the demand for SUVs.

Due to the strong performance of the VW Golf and the arrivals of the VW T-Roc, Seat Arona and the Skoda Karoq and Kodiaq, the VW Group retained its position as Europe’s best-selling car maker in March. The German group also increased its market share from 22.7% in Q1-17 to 23.7% in Q1-18 and recorded 1.01 million registrations – an increase of 5.2%.

Despite its Peugeot brand increasing its volume by 9.2%, registrations for the PSA Group stalled at 696,300 for the quarter. This was due to a drop posted by its Opel/Vauxhall brand, which was negatively affected by the decline in the UK car market. Renault-Nissan was the third largest car maker with 613,200 units registered. However, its volume decreased by 0.8% due to declines at both Renault and Nissan.

Ford and FCA posted the biggest market share losses in March 2018, largely due to the decline in their MPV ranges. FCA continued to be hit by declines in its Fiat brand but was boosted by good results from Jeep and Alfa Romeo, which continued to grow due to the popularity of their SUV models. Hyundai-Kia posted the highest percentage increase, with volume up by 7.0% to 277,800 units as a result of the new Kia Stonic and Hyundai Kona. The VW T-Roc recorded the highest market share gain amongst all models in both March and Q1 overall. The SUV is rapidly climbing the rankings and in March was the 39th best-selling car in Europe, with more than 13,600 units registered. The VW Golf was once again Europe’s most popular model, with its volume up by 16.4% in March to 54,100 units.

The Ford Fiesta, VW Polo, Ford Focus and Opel/Vauxhall Corsa felt the decline in the UK market, as their volume dropped by double-digits in March 2018. On the other hand, the Fiat 500 had a strong month and entered the top 10 of the most popular models sold, with 26,500 registrations.