Global car market remains stable during 2018, as continuous demand for SUVs offsets decline in sales of Compact cars and MPVs

2018 marked a somewhat challenging year for the global car market, as sales fell for the first time since 2009. Many carmakers felt the effects of trade tensions between the world’s biggest economies, political changes in key markets, and new threats to the status quo of the industry. “Last year could be considered as the beginning of a new era for the automotive industry,” said Felipe Munoz, JATO’s global analyst.

Strong results in India, Brazil, Russia and South East Asia offset stalling sales in Europe, China and the US. “The dip in the Chinese market had ramifications upon the rest of the global market in 2018. As China makes up nearly 30% of global vehicle sales, any change that happens there is felt across the rest of the world,” explains Munoz. Besides stalling sales in China, the automotive industry also had to deal with uncertainty in the European market, following the fallout from Brexit and the introduction of more complex environmental regulations. It also had to deal with leadership changes at some of the world’s biggest car makers, which are not always easy to navigate.

In what was one of the most significant results from 2018, India became the world’s fourth largest car market, as it was finally able to outsell Germany. India’s growth is projected to continue over the next few years, with it expected to become the third largest market by 2021. 2018 marked a record year for the sale of battery-powered electric vehicles. Passenger electric cars recorded 1.26 million sales throughout the year, up by a huge 74%. It was one of the highest increases among all car categories on the global market, which can be explained by several factors. Firstly, Chinese demand for EVs soared throughout 2018, as the car-type gained more visibility among consumers, due in part to their promotion by local governments for their environmental impact. Secondly, Tesla finally took off. The Model 3 became the world’s best-selling EV, as it was boosted by sales in North America, where it first became available. Finally, the diesel crisis in Europe also helped to raise awareness among consumers about the benefits of driving electric.

SUVs once again drove sales in the global market, proving that the boom in demand for the segment was not just a fad, but a long-lasting trend that continues to appeal to consumers around the world. However, as was expected, growth in the segment did slow down to single digits. A record 29.77 million SUVs were sold in 2018, with volume up by 7% on 2017. Even though growth in the segment remained strong, as SUVs recorded the highest percentage increase among all segments, it was the lowest result of the past four years and was almost half the growth registered in 2017, when sales increased year on year by 13%.

Despite the double-digit growth posted by Toyota, Hyundai-Kia and Volkswagen Group, which outsold GM, Renault-Nissan continued to dominate the SUV segment, recording almost 12% of the market share. SUVs also made up a large portion of the sales of FCA, Geely, Mazda, Tata Group, and many Chinese makers as well.

The continuous demand for SUVs came at the expense of sales of traditional cars. Among them, MPVs posted the largest drop, where volume was down by 14% to 6 million units – nearly 1 million less than in 2017 – as they lost ground in almost every market. Compact cars (hatchbacks, sedans and SWs) also recorded a decline, as volume fell by 8% following drops in the US and European markets.

Conversely, 2018 marked a good year for pickups, which outsold city-cars, as global volume totalled 5.2 million units, up by 5% on 2017. Surprisingly, the growth in the segment was not driven by the US, where more than half of global sales are recorded, but by Thailand and Brazil.

The Ford F-Series maintained its position as the world’s best-selling vehicle, as it was the only vehicle to register more than 1 million sales. This was due to the enormous popularity of the model in the US, where 84% of its global volume was recorded. 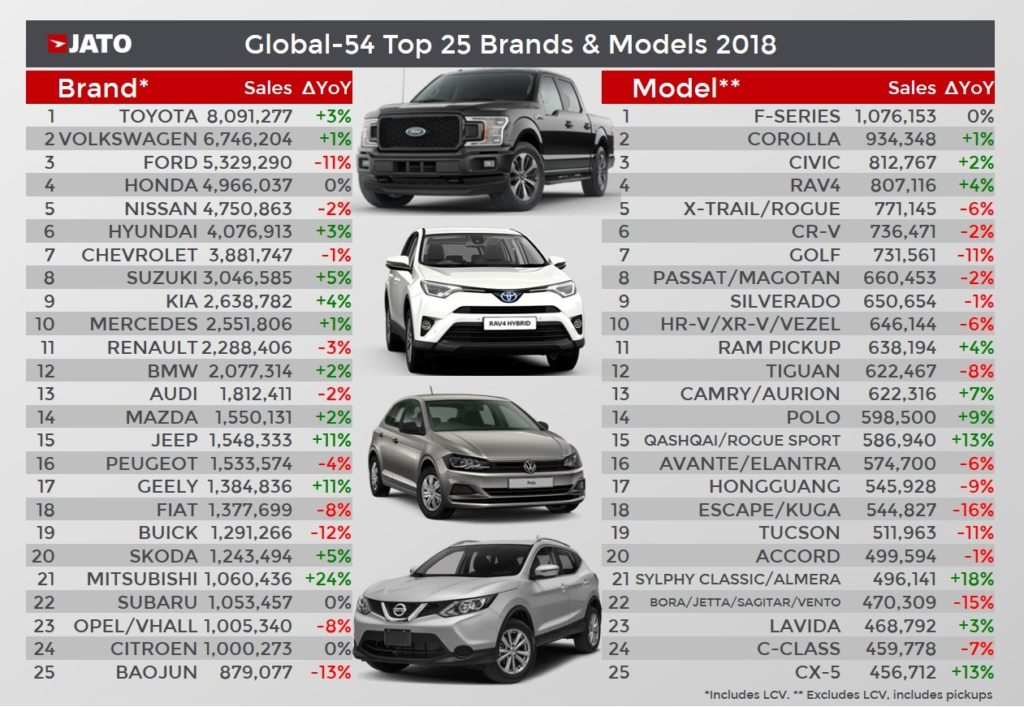 The Toyota Corolla also maintained its position in the rankings, where it was once again the second best-selling vehicle in the world, as the industry anticipates the arrival of its next generation. In contrast, the Volkswagen Golf, which occupied the third position in 2017, fell down the rankings to 7th place in 2018, as it posted the biggest drop in the global top 10. The Golf felt the effects of the diesel crisis in Europe, as well as the age of its current model, with its next generation not expected to be presented to the market until later this year.

The Honda Civic instead occupied the third spot, as it was boosted by increased demand in China. Meanwhile, the Toyota Rav4 outsold the Nissan X-Trail/Rogue to become the world’s best-selling SUV and fourth best-selling car. The X-Trail/Rogue was hampered by falls in demand in the US, where volume was down by 11%, and in Europe, where volume was down by 31%, as it also felt the effects of having an older model, having first been introduced to the market in 2013.