JATO’s most recent study of global volumes indicates that there still isn’t mass demand for electric vehicles in the market. According to data collected from 43 markets around the world, the average retail price of an electric car was 81% higher than other cars bought by consumers in H1 2019. 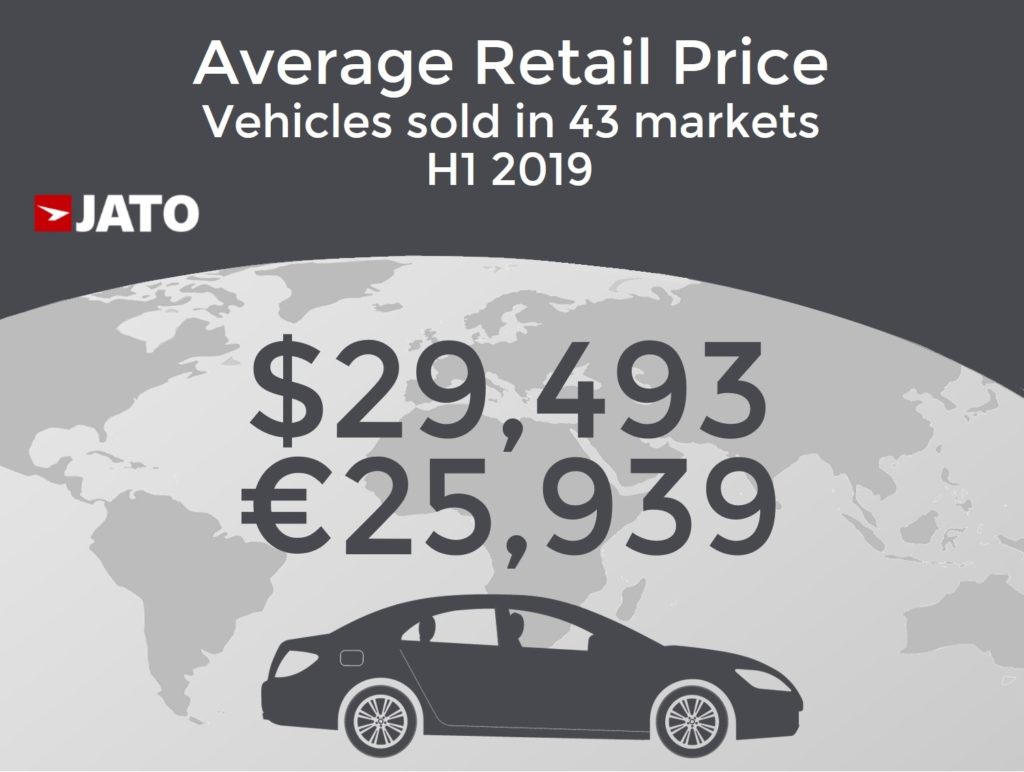 Despite the noticeable efforts of many automakers to bring more affordable and appealing electric vehicles to the market, the reality is that high prices still remain a barrier. These prices represent one of four main challenges to the market that the EV industry needs to address, alongside poor infrastructure, battery range and a limited offer of electric cars.

Europe is the world’s second largest EV market after China, with consumers’ awareness and local authorities’ interest  higher here than anywhere else. These cars are set to play a crucial role within OEMs’ plans to meet the new complex CO2 targets. It will be very difficult, if not impossible, to comply with the new regulation without EVs. However, these cars still represent a niche market, with a market share of just 1.9%.

The high prices of electric cars goes some way to explain their low popularity. In H1 2019, the average retail price of cars registered in Europe (plus Israel and Turkey) totaled $34,091 per unit, whereas the average price of the most popular BEV oscillated between $35,000 and $103,000. This is the second highest average, and is only surpassed by the average retail price of cars in USA-Canada where the current market demand favours SUVs which are typically more expensive than hatchbacks and sedans. Looking at the retail price within different EU markets demonstrates this disparity. Scandinavian markets, where taxes are higher for cars, and Switzerland, where the demand for luxury cars and sports cars is quite strong, top the rankings by retail price/unit registered. On the other hand, in Greece, Romania and Croatia the lower purchase power benefits the cheapest cars. For example, a car registered in Norway is 2.4 times more expensive than its counterpart in Greece.

Within this context, it is worrying to see the prices of electric vehicles exceeding these averages. Even the small Zoe fails to compete with current average retail prices; while it is one of the cheapest EVs available in today’s market, it is still more expensive than the average retail prices of a car in 15 European markets.

A Tesla Model 3 is 21% more expensive in its homeland

The situation in USA-Canada is not so different from that of Europe. Due to the popularity of large trucks, the average retail price of vehicles sold is marginally higher than in Europe, at $35,614/unit. Pickups or trucks counted for 18% of sales volume in H1 2019 at an average retail price of $43,650, which helps to explain why this region has the highest average in the world. 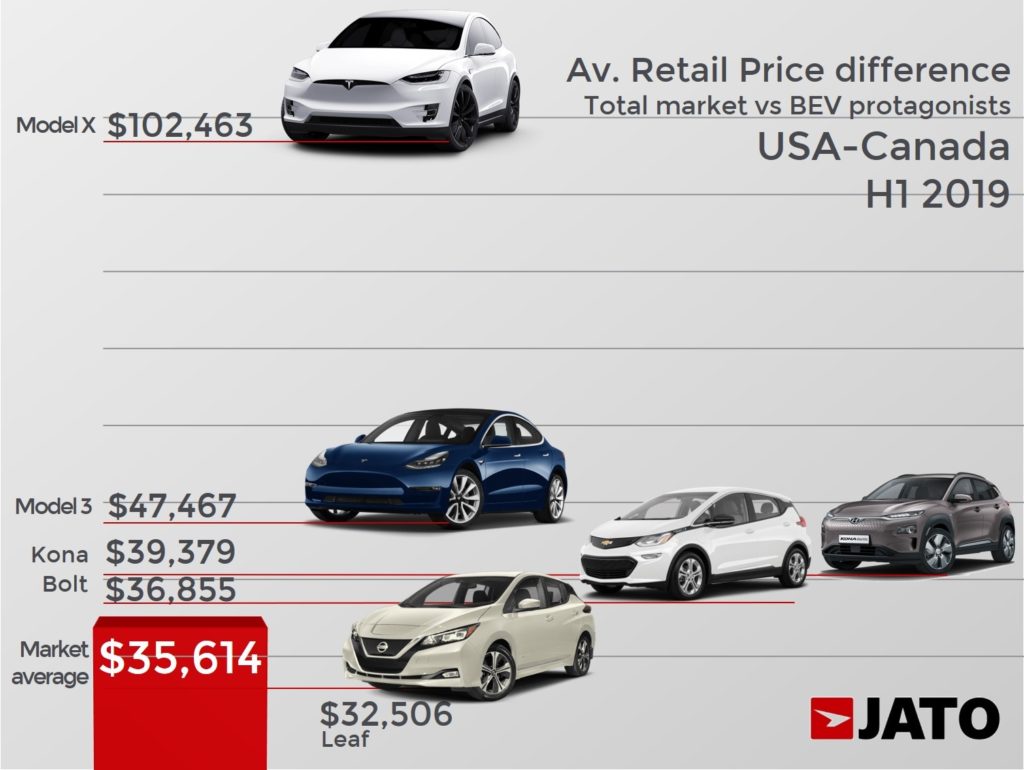 China is different; as the world’s largest BEV market, these vehicles became a pillar of the Chinese economic plan for the coming years. In addition, they are being sold in a unique way. Chinese BEVs are projected, designed and developed for local demand, meaning that many of them would not meet the more complex safety standards of Europe or the USA. 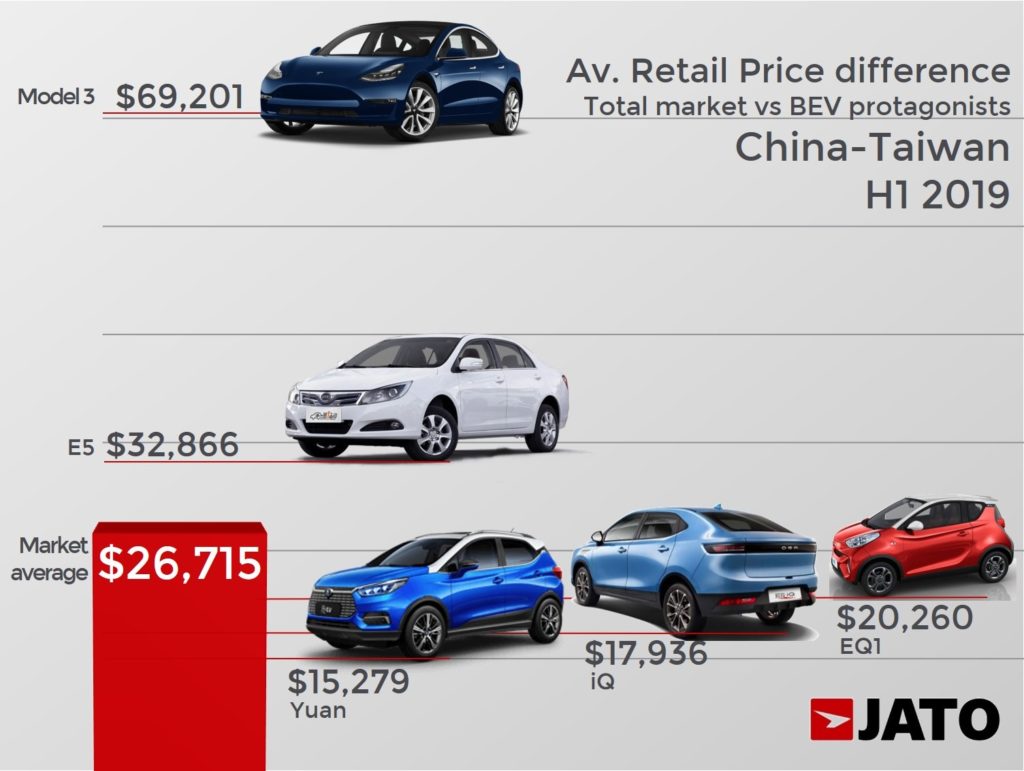 Fewer safety regulations along with immense support for their development from the government mean that Chinese OEMs can hit the market with cheap BEVs. The Chery EQ1, a tiny city-car that happens to be one of the most popular BEVs, is priced at $20,260, or $6,455 less than the total average. Moreover, popular SUVs are also welcoming the affordable electric models: the average retail price of the fully electric B-SUV BYD Yuan was 43% lower than the market’s average.

These two examples are game changers and confirm that China is ahead in finding the solution to the price problem of BEVs, particularly in relation to the SUV. Consumers demand electric SUVS more than electric hatchbacks or sedans , and Europe and the USA lag behind China in this field. However, there are still gaps that remain, such as electric sedans which represent 42% of China’s car sales. 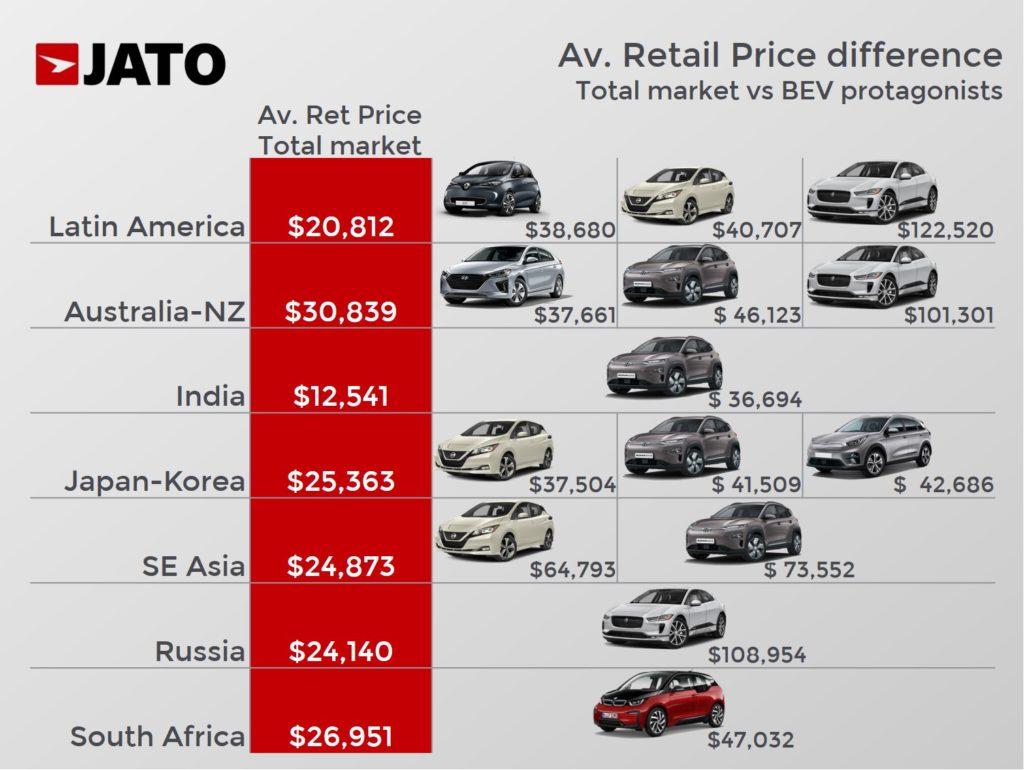 Will future BEVs reduce the gap?

The gap is set to reduce in the long term. Prices of BEVs are expected to fall as battery costs decrease and the OEMs share their technologies. Yet, based on the latest product announcements and presentations, this is not the case in the short term. It will be very difficult for OEMs to reduce prices and, most importantly, to expand profits without an increase in sales volumes. 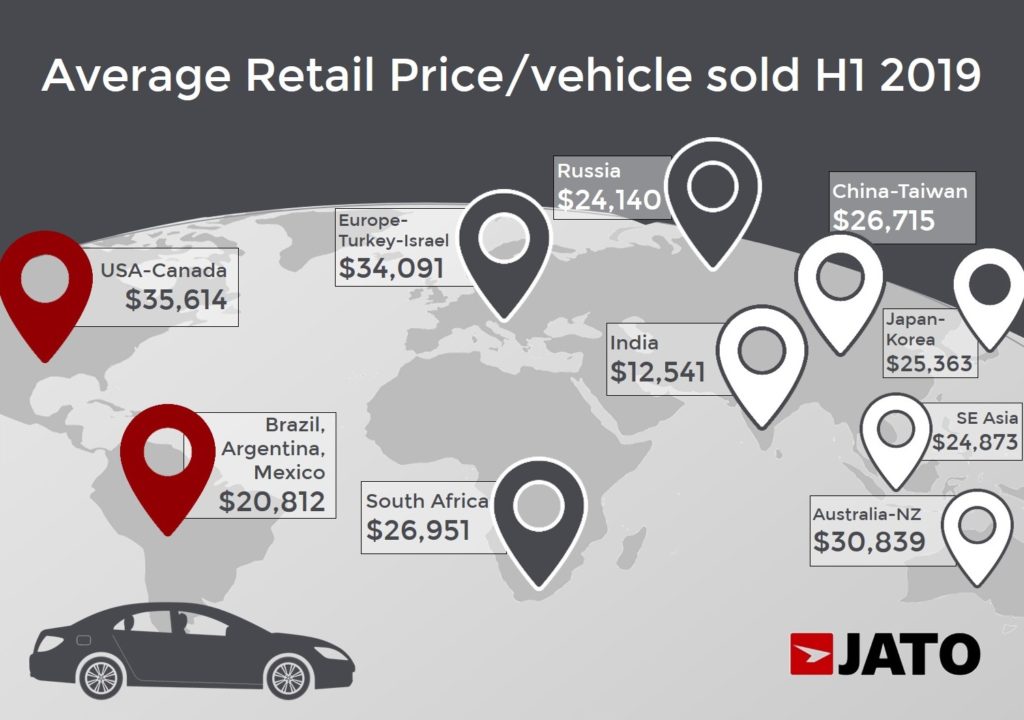 The majority of the known future launches include cars that are more appealing with larger ranges, but this does not necessarily mean they are cheaper. The price of the entry version of the Volkswagen ID.3 is around $33,000. This is less than the current retail price average per unit in Europe, however it is a compact hatchback that can lag behind when compared to a similar priced SUV in terms of appeal. This is also the case for the Opel Corsa-e, Peugeot 208-e and the coming el-Born based Seat. They are all expected to compete in the same price range of the Renault Zoe. The only exception could be the coming Peugeot 2008-e, a small SUV whose price should not exceed the $40,000 mark.

Other important launches include the Tesla Model Y, which is due to sit one step above the Model 3, and the Volvo XC40-e at an estimated base price of $59,900. Better news could come from India, where analysts predict that Maruti Suzuki will launch the electric Wagon R at $11,243, or 10% less than the country’s total average retail price. The electric Tata Tiago is supposed to go even lower with an entry price of $8,431. Others, like the electric versions of the Tata Tigor, Mahinda KUV100, and Renault Kwid, are not expected to sit far from the current average of $12,541 per unit, currently the world’s lowest.

In contrast to the midsize cars, the midsize SUVs posted an increase in their registrations in Europe. Their volume… https://t.co/UFND7WcbnK