2020, the pandemic year: how incentives reshaped the car market

Incentives are tactical actions enticing consumers to buy a new car. They are limited in time and / or numbers, and they are available when purchasing a new car.

Commonplace in this day and age, incentives vary from one market to another. There are differences across markets, concerning the number of campaigns offered, types of campaigns, the discount available and campaign release. For instance, the same OEM may have different incentive offerings across neighboring countries.

JATO has been researching retail incentives (for private buyers) for over ten years, and there are no signs to indicate that incentive activity witnessed over this period is abating. This report analyses car incentives across the 5 biggest car markets in Europe, with specific reference to the market in 2020.

In 2020 the market shifted. Stock campaigns increased and scrappage offers followed. Trade-in deals declined with many dealers potentially avoiding having older cars sat in their compounds.

The Incentive types that continued to perform well were: 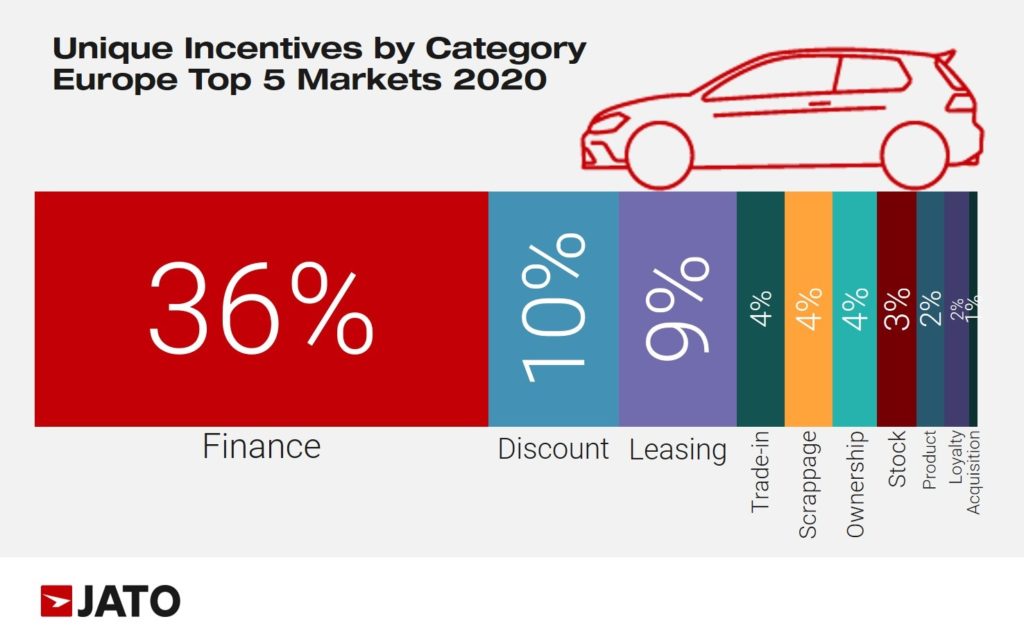 The average retail price and discount have both been increasing steadily over the past 3 years, across all EU5 markets. However, this is where the similarity ends, with the average percentage discount at its highest in Spain, yet lowest in the UK. Regardless, discounts remain strong. 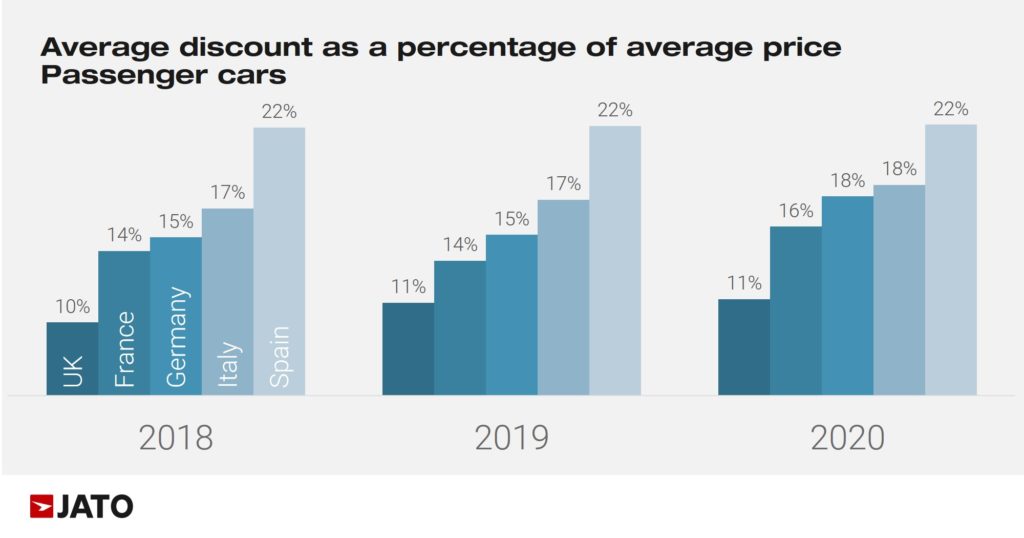 What happened with EV incentives in 2020? 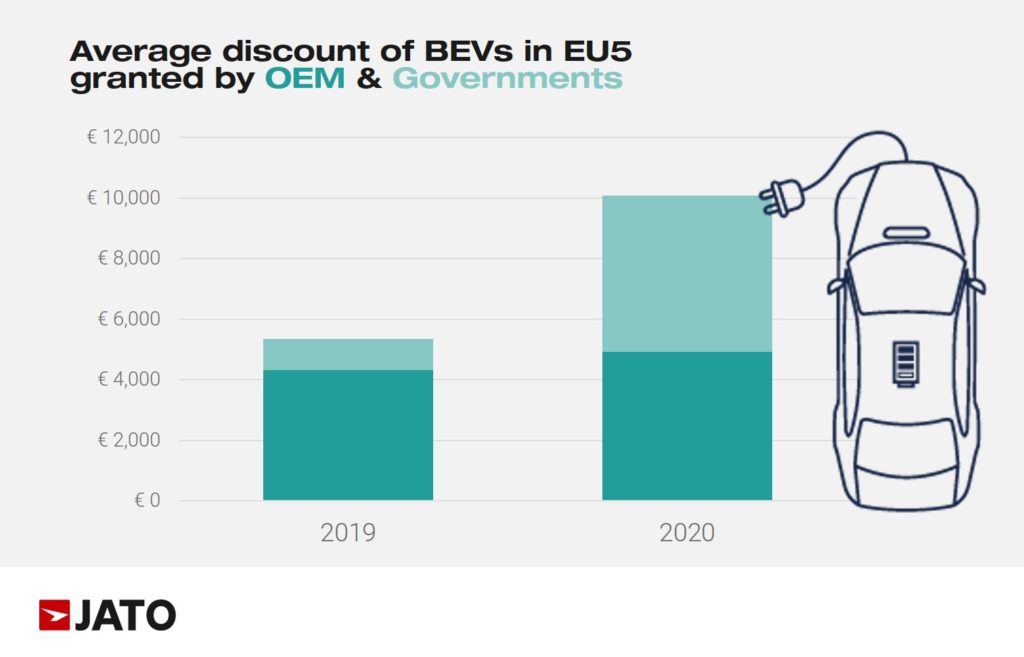 For EVs, government support has constraints attached, such as price and range. In Spain, the government provided up to €4,000 for each EV, and another €1,500 if the original car was scrapped. Italian government support reached a maximum of €5,000 in 2020, alongside an additional €3,000 if the original car traded in was scrapped. Similarly, in France, consumers could receive up to €7,000 in support, alongside an additional €3,000 for scrappage. While the German government offered €6,000, but no scrappage incentives. The UK government offered the least incentives, with a grant of just £3,000 for the purchase of an EV. 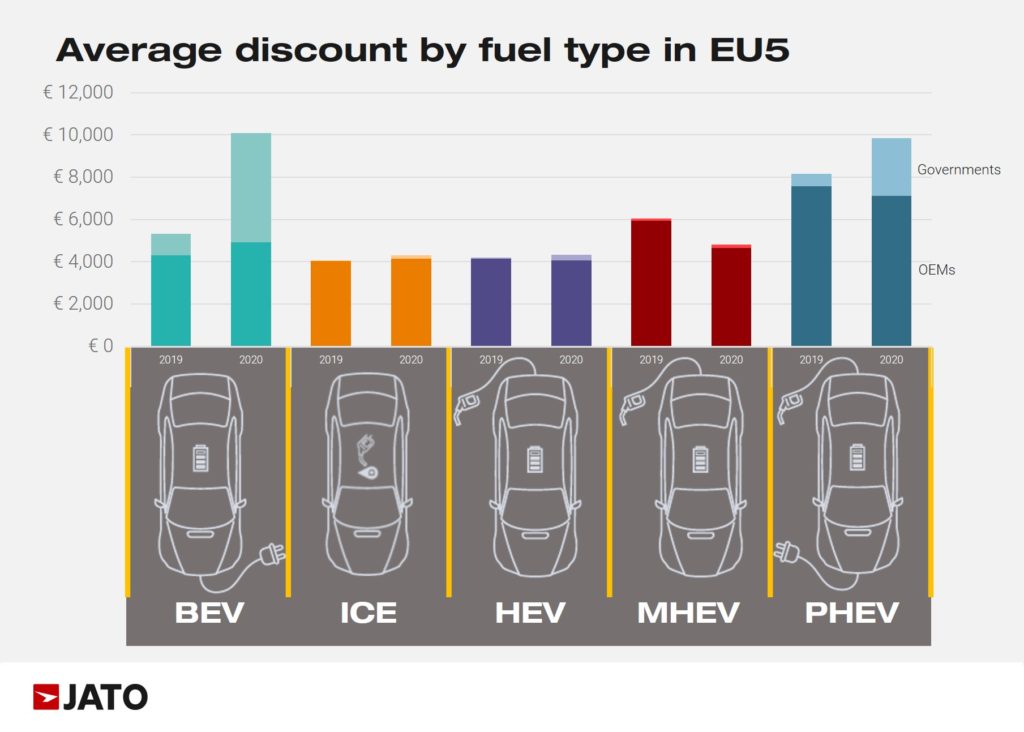 If ICE vehicles and powertrain systems are removed from the equation, the huge uptick in the volume of EVs is clear in 2020, alongside the discounts boosted by government contributions. 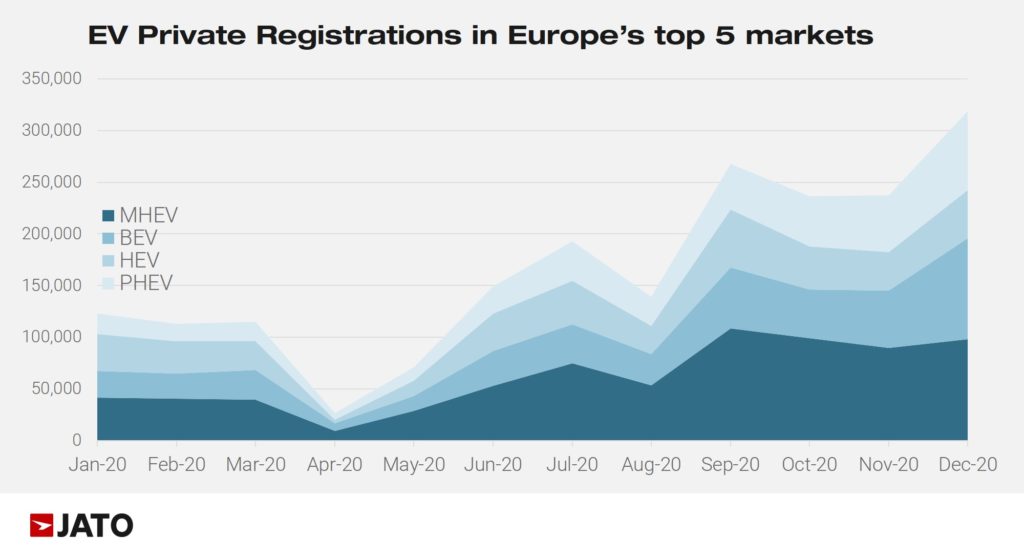 As a customer, what percentage discount can you expect to see across the various segments? It is clear that there is a marked increase for certain vehicle segments, the smaller the car the higher the percentage discount. On average, the discount for cars within the ‘mini’ segment is 25% across EU5. However, towards the other end of the scale, “large SUV’s” average a mere 12% discount. 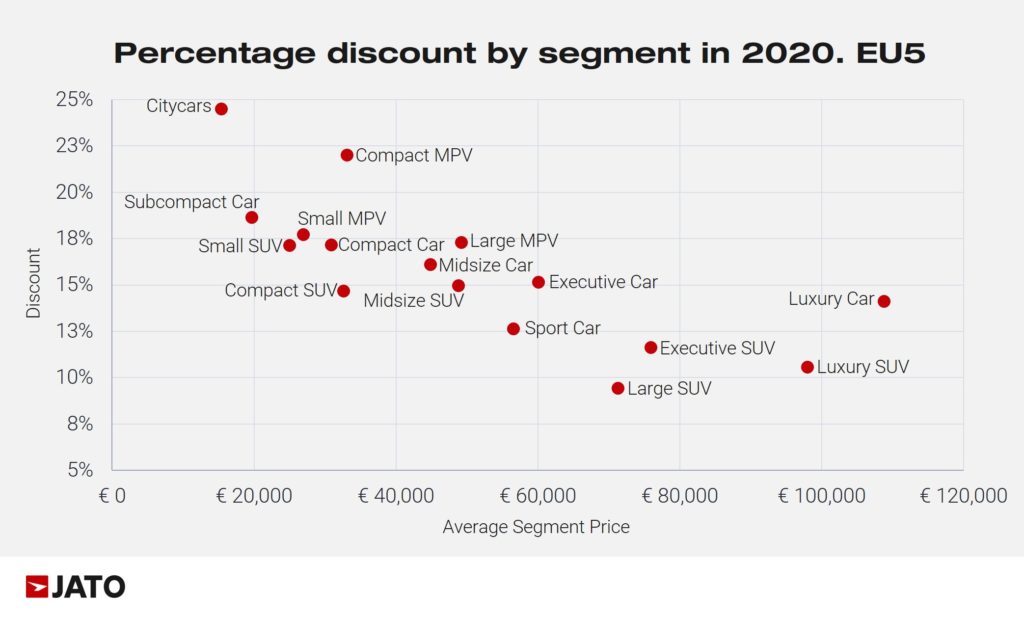 Traditionally, campaign releases are quarterly and 2019 was a typical year from this perspective. However, in 2020 – a period of global uncertainty – the traditional quarterly trend was distorted. We saw a tendency to release more campaigns, in fact the number of releases increased in months 2 and 3 of each quarter. In April 2020, OEMs published campaigns, but extended programs from the previous quarter, with 81% of campaigns carried over with no change – the highest percentage for a quarter change in the last 24 months, for EU5.

On top of regular quarterly campaigns – the norm in some markets such as Germany, it is not unusual for offers to change up to 3 times during the month in other markets like Italy, where OEMs complement the start of the month campaign pack release, with other actions.

In other markets, short-term ‘weekend’ offers are available, accompanied by appropriate marketing campaigns to publicize the good deals. 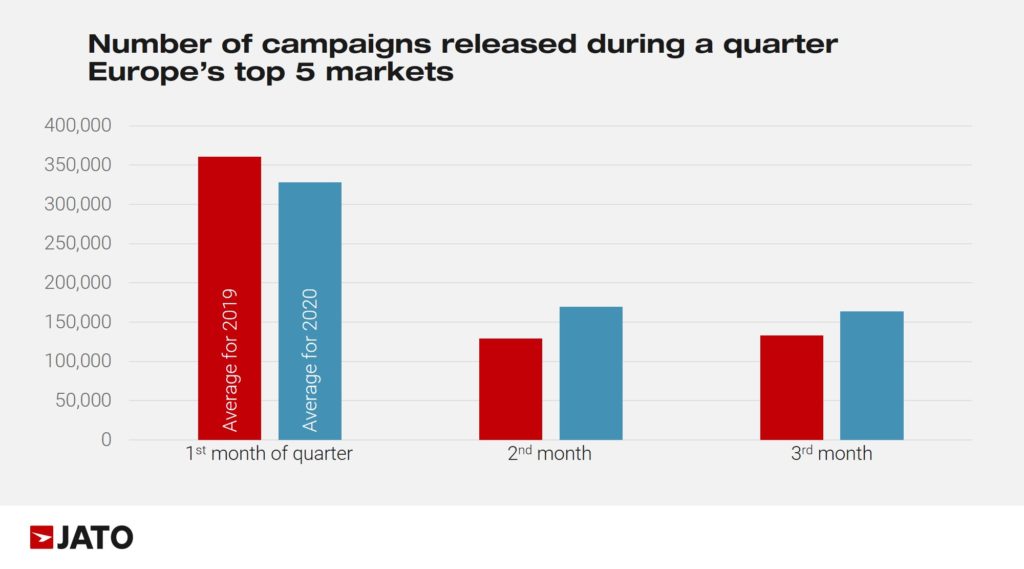 Getting the message to consumers: Advertised public incentives

Advertising is also playing a part in vehicle sales. There are strategic adverts, where no promotions are mentioned. There are also tactical promotions, where we see a headline offer price, discount or monthly payment.

Italy is the largest incentive market for number of campaigns offered. However, it is one of the countries that advertises the least. On the other hand, the UK and France have the lowest number of incentives in EU5, yet the percentage of campaigns advertised is higher. In 2020, the number of offers advertised increased in Italy, France and Spain. However, the UK remained stable, and Germany saw a decline.

It is more complex to change a sales strategy from one day to another. This is where incentives come into their own, they are tactical actions, with campaigns changing as and when needs dictate. This was evident in 2020 – the industry’s reaction was immediate. In April, a hold on incentives, followed by a quick rebound in May and June – most notably across Southern European markets.

However, within these findings we saw marked differences across the EU5 markets, including the number of incentives offered, how often they were updated, the average discount available in each market and the types of incentives being used to reach the private consumer. On top of this, there were also notable differences in the average discount across car segments and the powertrain type.

For incentive categorization, 2020 saw a seismic shift in favor of stock type discounts – perhaps a consequent of tax changes and a fall in volume in Q2 2020, causing inventory stock imbalances. With many government support programs in place, scrappage incentives increased.

From what we can see, the outlook for incentives is promising. The number of campaigns remains high, and 2021 promises to be another active year, with countries coming out of local lockdowns, government scrappage programs coming up for renewal, and new or revised taxes across many countries.

Incentives are part of the purchase process and experience has shown us that in times of uncertainty it is important to be able to respond to what competitors are doing.

As we have seen, even in Europe, markets can be different which makes the research of incentives both exciting and challenging.