The first part of the analysis of average CO2 emissions in Europe includes the results of the top 10 mainstream brands in Europe. Their volume counted for 58% of total registrations in Europe-23, meaning they have a big impact on overall result. Last year, the average CO2 emissions for Volkswagen, Renault, Ford, Opel/Vauxhall, Peugeot, Fiat, Skoda, Toyota, Citroen and Nissan totaled 113.8 g/km. That was 1 g/km more than the average recorded in 2016, and 4.3 g/km less than total market’s average. 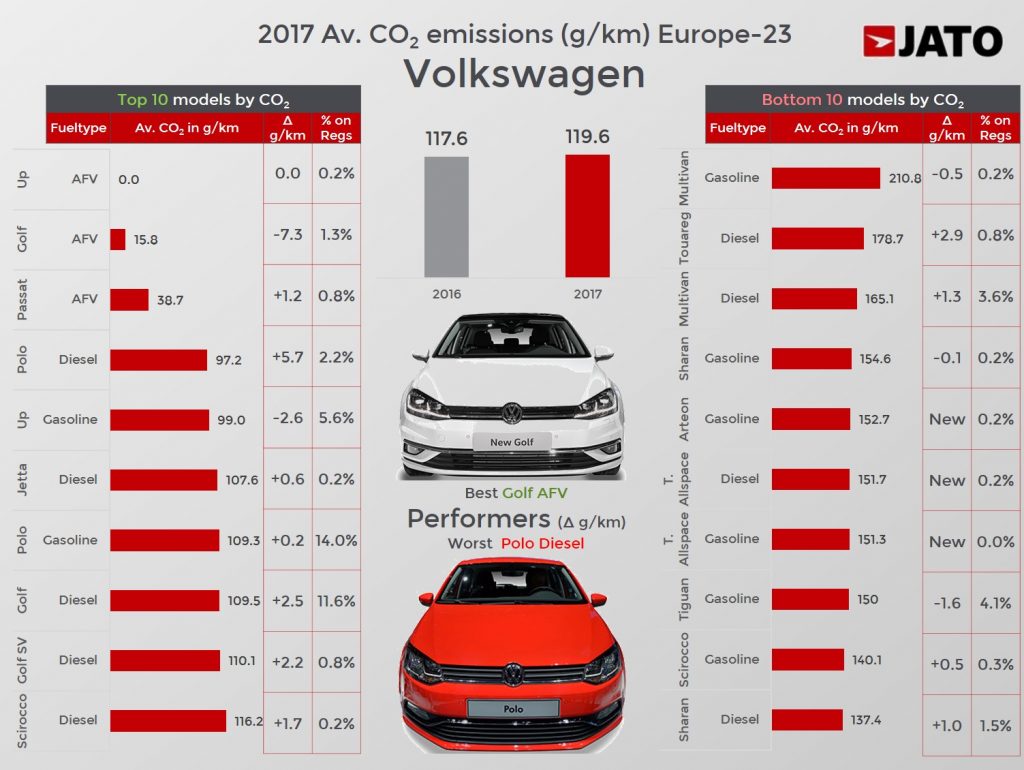 Average up by 2 g/km following increases at some of its key products like the Polo and the Golf diesel. As the demand continues to shift from diesel to gasoline and AFV, Volkswagen is posting significant improvements on its gasoline engines emissions. Meanwhile the electric Golf gains more traction. The arrival of more and larger SUVs, along with the model changeover of the Polo is having a negative impact on the brand’s average emissions. In fact, the models with average above 110 g/km are gaining share. 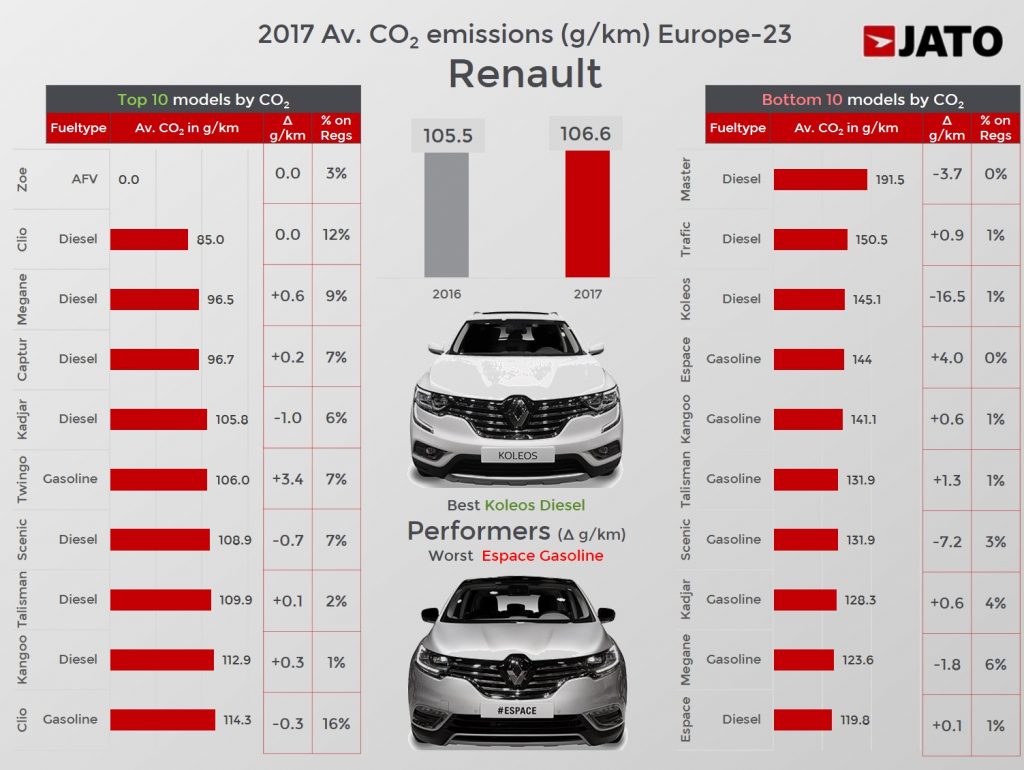 Renault is also increasing its average due to higher sales of its bigger models and the little effect of its AFV range. The Megane gained more share among Renault models, but its average emissions for the diesel version grew by 0.6 g/km. Renault is now selling more models with higher emissions, as those with an average between 90 and 100 fell from 44% to 38% of its sales. Meanwhile, the Renault with average emissions between 110 and 130 g/km jumped from 36% to 40% of sales in 2017. 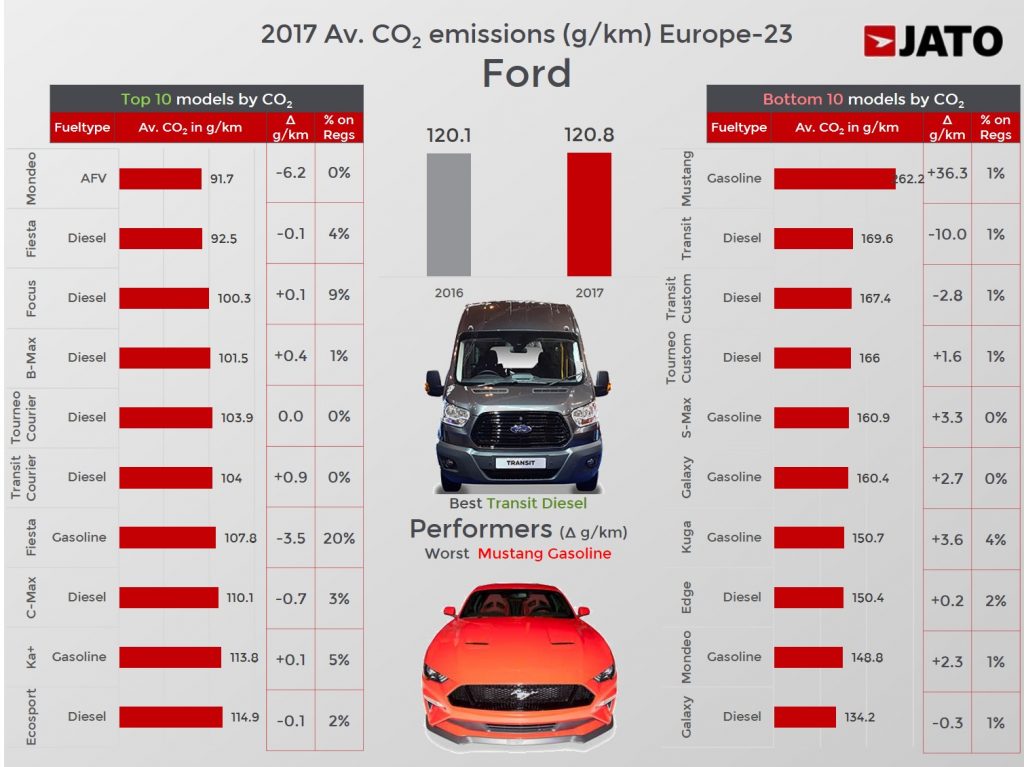 Tiny change for Ford’s average, which is the second highest among the top 10 mainstream brands. While the Fiesta gasoline did a good job in 2017, other models like the Kuga gasoline and Focus diesel didn’t help. Ford occupied the 20th position in the 50 brands ranking but showed signs of improvement in 2017 with its 34% of its registrations corresponding to models with average emissions between 90 and 100 g/km (16% in 2016). They still need more AFV. 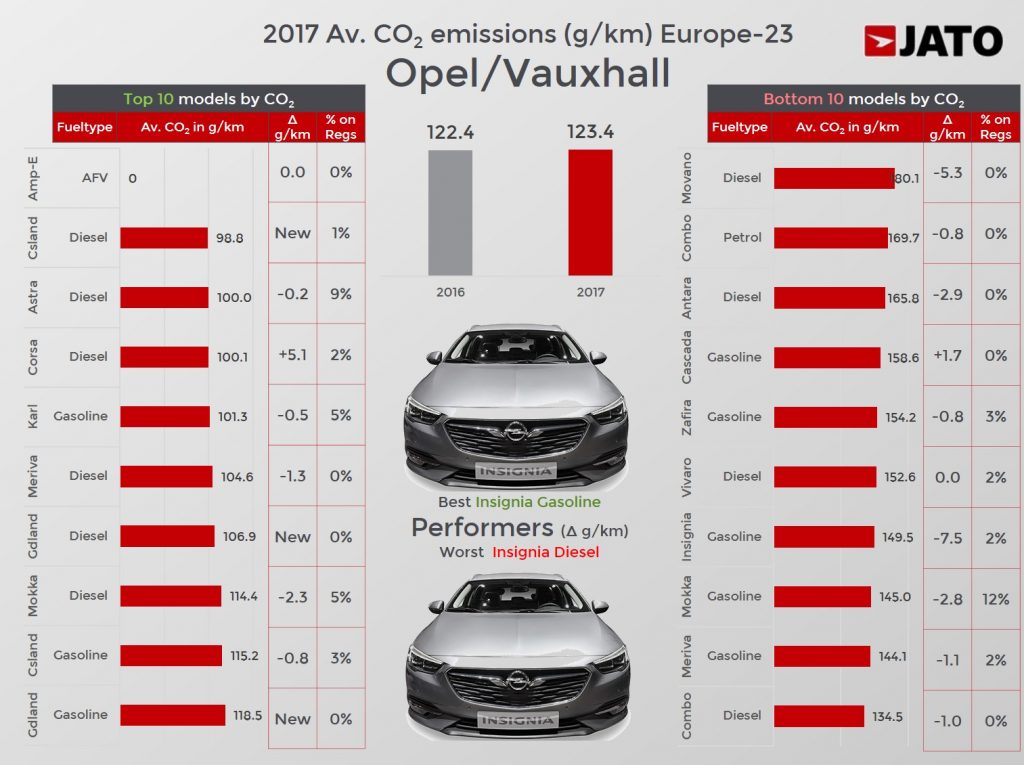 As the brand sells more SUVs and fewer hatchbacks, average emissions grew by 1 g/km in 2017 compared to 2016. It posted the highest average among the top 10 brands analyzed in this article. This is mostly because its three top seller, Corsa gasoline, Astra gasoline and Mokka gasoline have high averages between 121 and 145 g/km. In fact, even if the Mokka gasoline improved (-2.8 g/km), it is still a key product with a high average. More than half the cars sold by this make posted an average between 110 and 130 g/km. 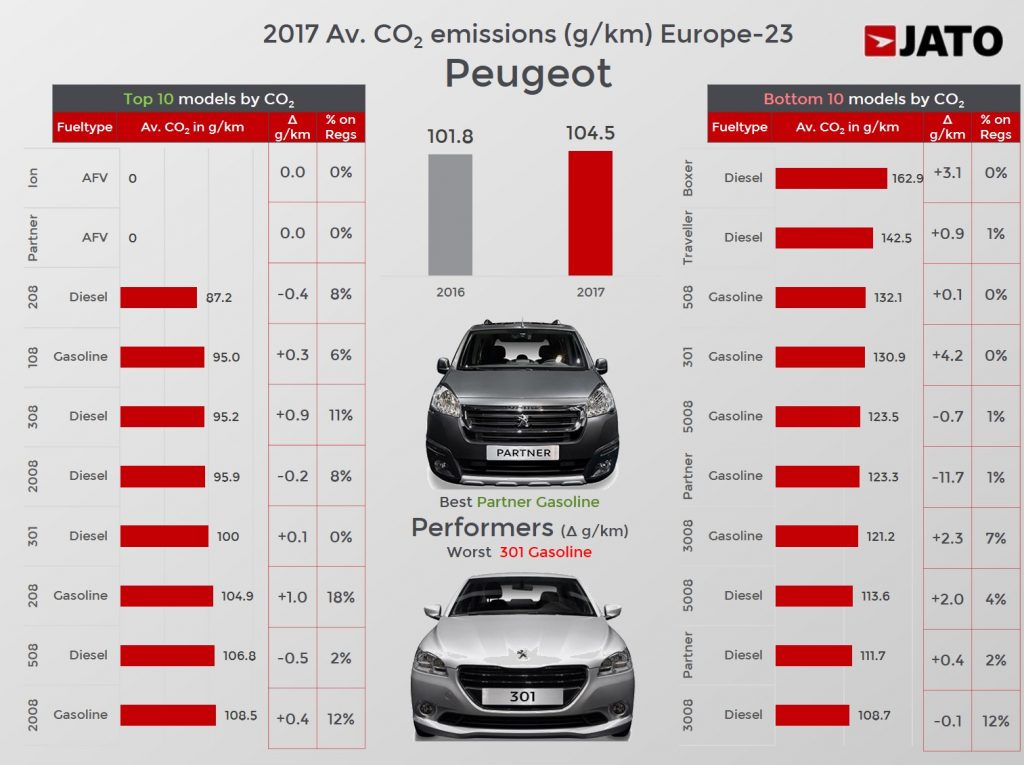 Peugeot was the top performer brand in 2016 (among the top 20 best-selling makes), but its success in the SUV segment placed it in the second position in 2017. As the gasoline versions of Peugeot 3008 and 5008 continue to gain share, it is clear that they have had a negative effect on the brand’s average. The 208 gasoline (18% of total registrations) increased its average by 1 g/km. Last year, 3 in 4 of the cars sold by Peugeot in Europe recorded an average between 90 and 110 g/km. Not bad. 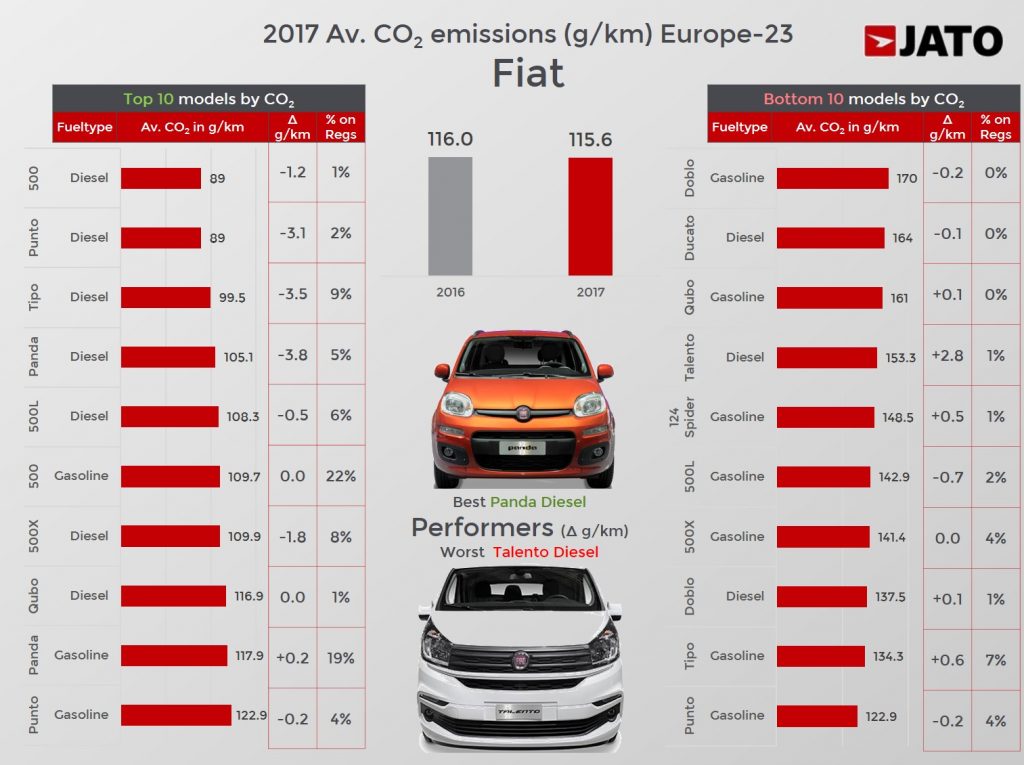 Fiat was one of the two big mainstream brands to post an improvement in 2017. Most of the average decrease is explained by the increasing importance of the Tipo diesel in Fiat’s registrations, as it was its third best-selling model and recorded an improvement of 3.5 g/km compared to 2016. Despite having a range mostly composed by small cars, there is still an important part of its registrations (17%) producing an average CO2 emissions between 130 and 160 g/km. The are no AFV in its range, so further average decrease is not likely to happen. 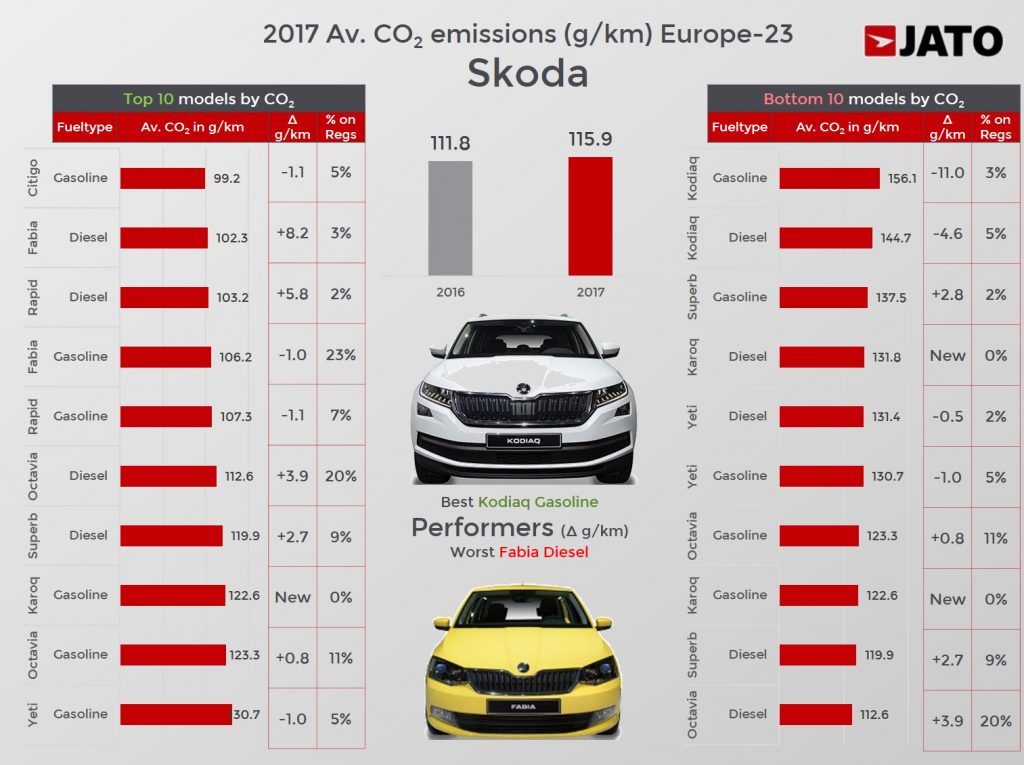 As it happens to Peugeot, the new SUVs are also having a negative effect on Skoda’s average. It was one of the brands with the highest average increase between 2016 and 2017 (+4.1 g/km) falling from the 8th to the 14th position in the overall ranking. As the Kodiaq gasoline and diesel registered averages of 156.1 and 144.7 g/km respectively, the Octavia diesel increased its average by 3.9 g/km to 112.6. These factors combined have are increasing the average up to the point where the models with averages between 110 and 130 g/km now count for 41% of Skoda’s total registrations (19% in 2016). 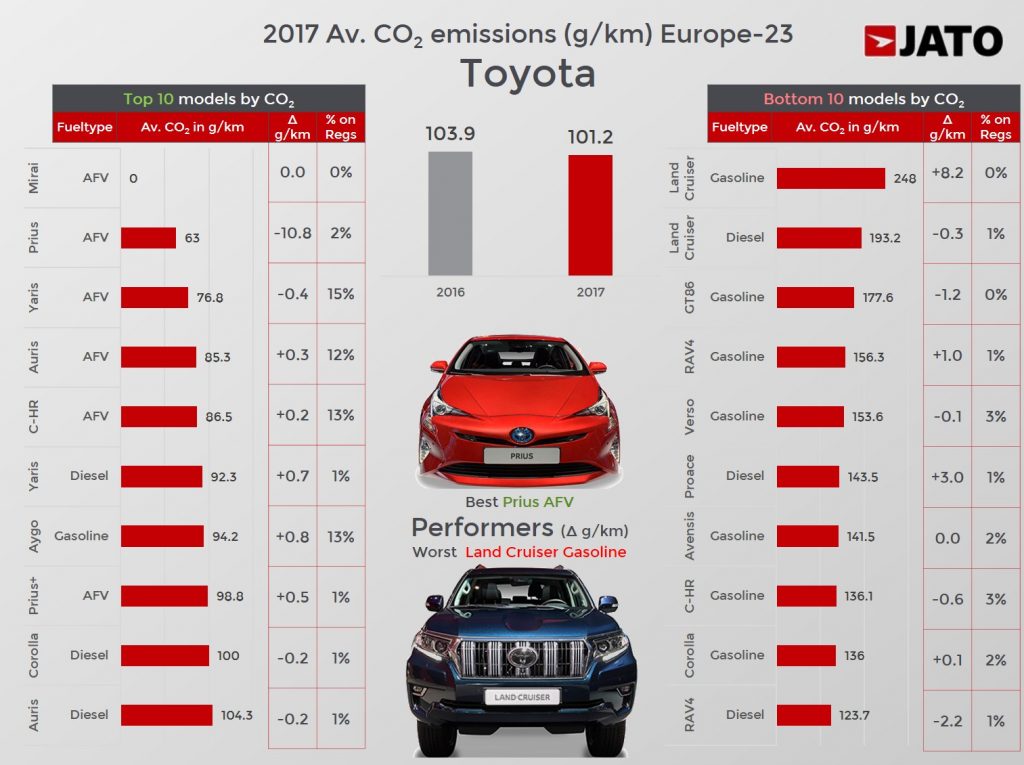 Toyota became Europe’s cleanest car brand amongst the top 20 best-selling brands. It was the third in the top 50, behind Tesla and Smart. It was able to improve thanks to its hybrid range, the largest in Europe. Despite the tiny average increases seen in the hybrid versions of Auris and C-HR, the brand’s average decreased following big improvements on the Prius and the Yaris hybrid, its top-seller. Last year, 42% of its registrations corresponded to cars with average emissions between 0 and 90 g/km (31% in 2016). 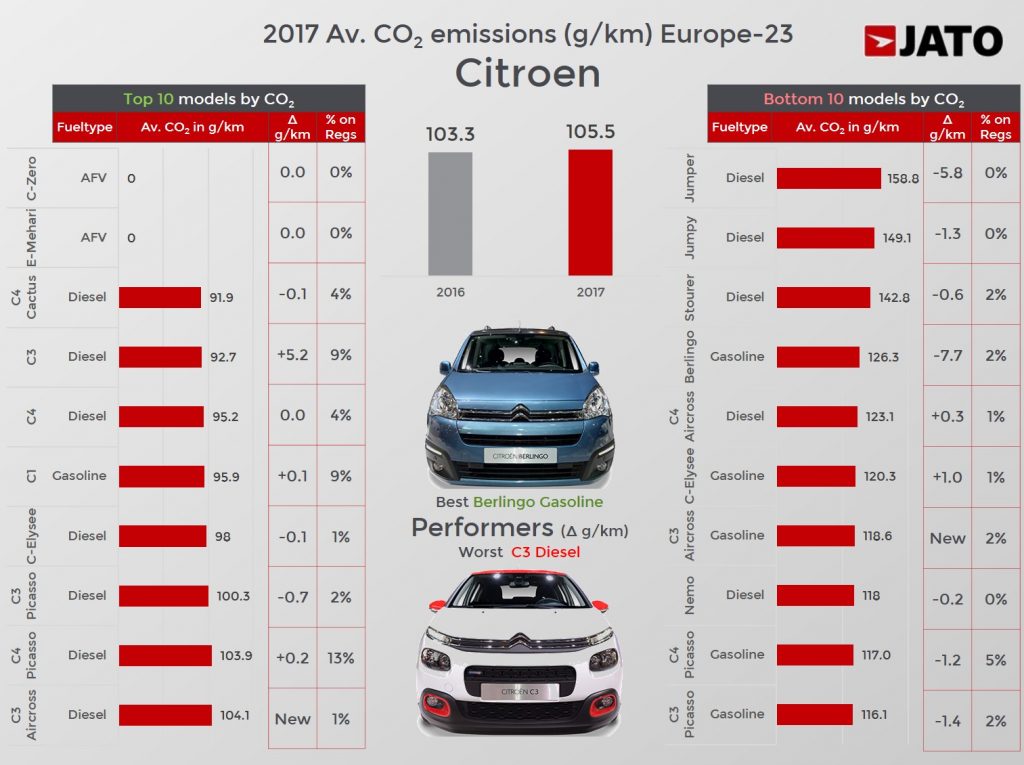 Citroen’s top 5 best-sellers posted increases in their average in 2017. The C3 gasoline, C4 Picasso diesel, C1 gasoline, C3 diesel and C4 Cactus gasoline all registered higher averages last year. The worst case was the C3 diesel, up by 5.2 g/km. However, Citroen is still one of the big mainstream brands with the lowest average as 76% of its registrations corresponded to cars with emissions between 90 and 110 g/km. Its AFV range is still marginal. 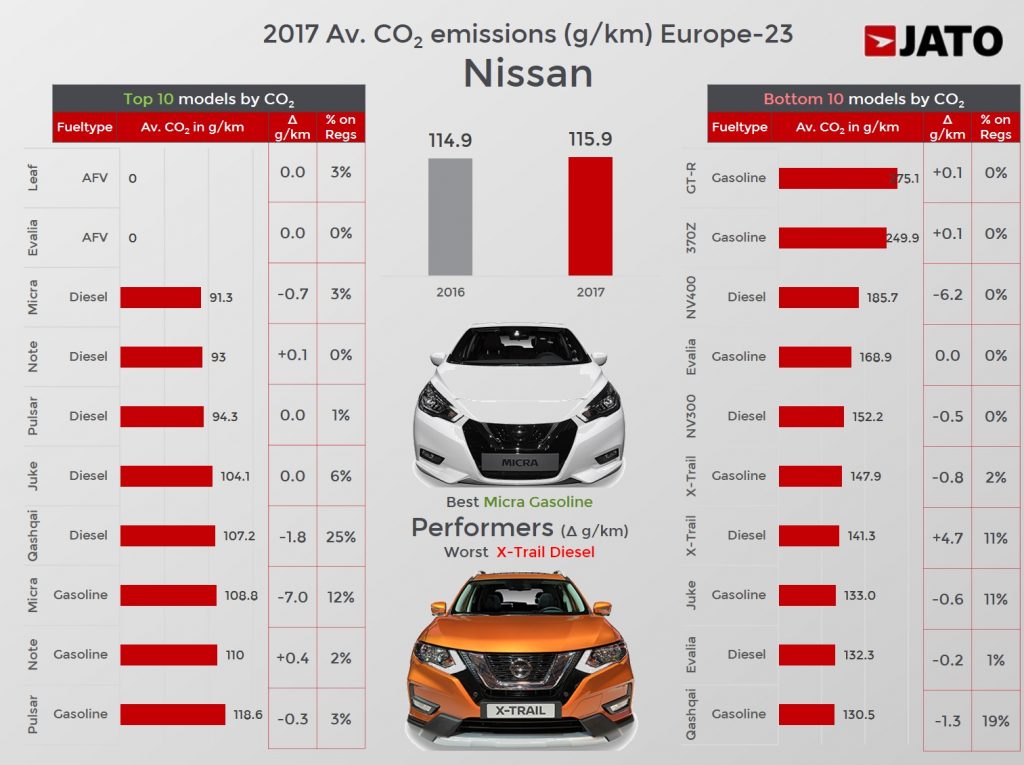 Last year 73% of Nissan registrations in Europe were SUVs. Besides the Qashqai (diesel average 107.2 g/km; gasoline at 130.5), the brand is also strong with the X-Trail, whose average for its diesel version jumped from 136.6 to 141.3 g/km, and was the 5th best-selling Nissan. On the other hand, the Micra gasoline contributed to offset the effects of its bigger brothers (-7 g/km). Almost half of Nissan’s volume in Europe posted an average between 90 and 110, while 43% of its registrations corresponded to cars with average between 130 and 160 g/km.

In contrast to the midsize cars, the midsize SUVs posted an increase in their registrations in Europe. Their volume… https://t.co/UFND7WcbnK