EV growth inconsistent across Europe and US, while developing markets fall further behind

Despite global economic uncertainty, the electric vehicle (EV) market has grown at a remarkable rate, particularly in the world’s largest economies. In Europe, China, and the US, EVs are rapidly gaining market share, and as these vehicles become an increasingly realistic alternative to their ICE counterparts, there remains significant potential for further growth in the coming years. Under closer examination however.

Data gathered by JATO Dynamics reveals a significant variance in the trajectory of EV uptake between European, US, and the world’s developing markets. 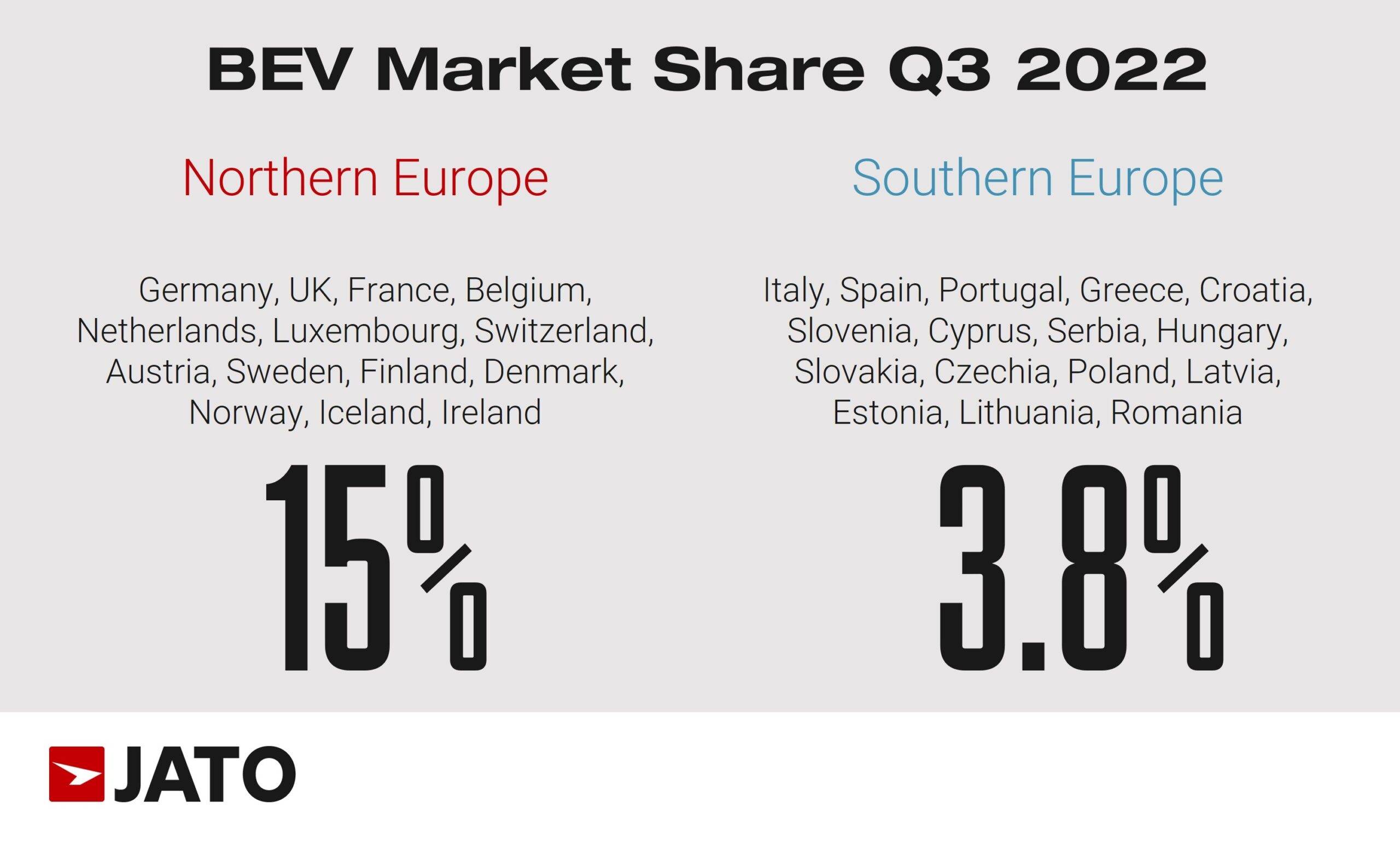 In Norway, EVs have become the most popular vehicles among consumers thanks to strong government incentives, well established infrastructure, and wider benefits. It is now cheaper to purchase an EV in Norway than an ICE vehicle in some other European countries – in September EVs accounted for 77% of the country’s total car registrations. Demand is also strong across neighbouring Scandinavian markets, again due to continued government support and the higher purchasing powerful of consumers relative to other European countries.

EV demand is also accelerating across Europe’s more stable economies including Germany, Austria, Switzerland, France, the Benelux, the UK, Ireland, and Iceland. Combined, they account for more than two thirds of Europe’s total sales volume – in Q3 2022 the market share of EVs in across these markets hit 15%. 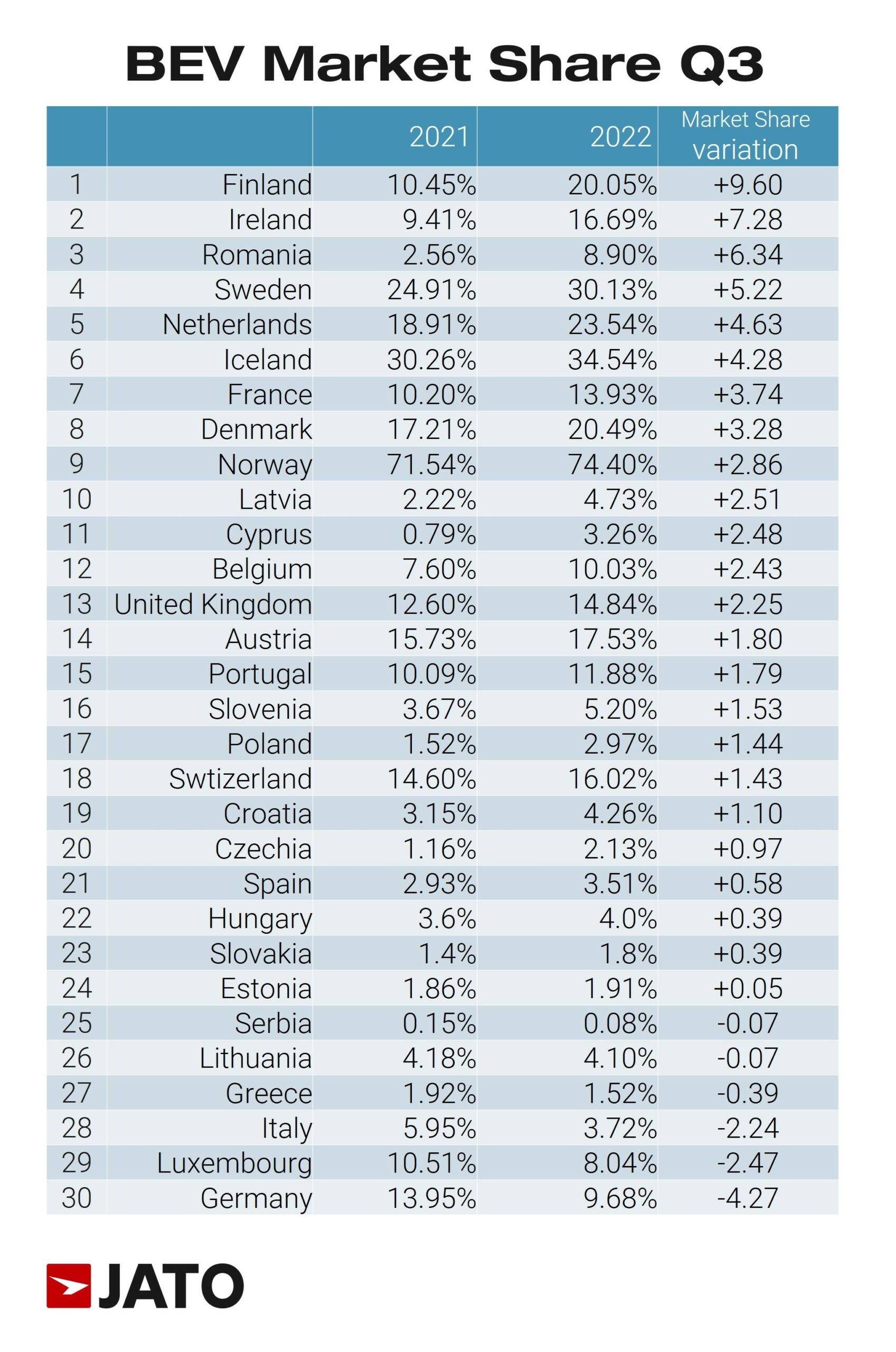 Contrastingly, in the Mediterranean countries (except France), Portugal, Central Europe, and the Baltic states, where the income per capita is generally lower, EV uptake is progressing at a much slower rate. In these countries, EV market share was just 3.8% in Q3 2022. Other factors underlying this negative trend include weaker government incentives, poor infrastructure, and fuel prices.

ZEV states lead the EV race in the US

As with European countries, EV uptake in the US varies from state to state. California has emerged as the clear leader in the electrification race due to strict regulation, attractive incentives, and the role of tech companies such as Tesla. The Zero-Emission Vehicle (ZEV) programme – designed to secure California’s long-term emission reduction goals – requires auto manufacturers to sell a certain number of the cleanest cars available. 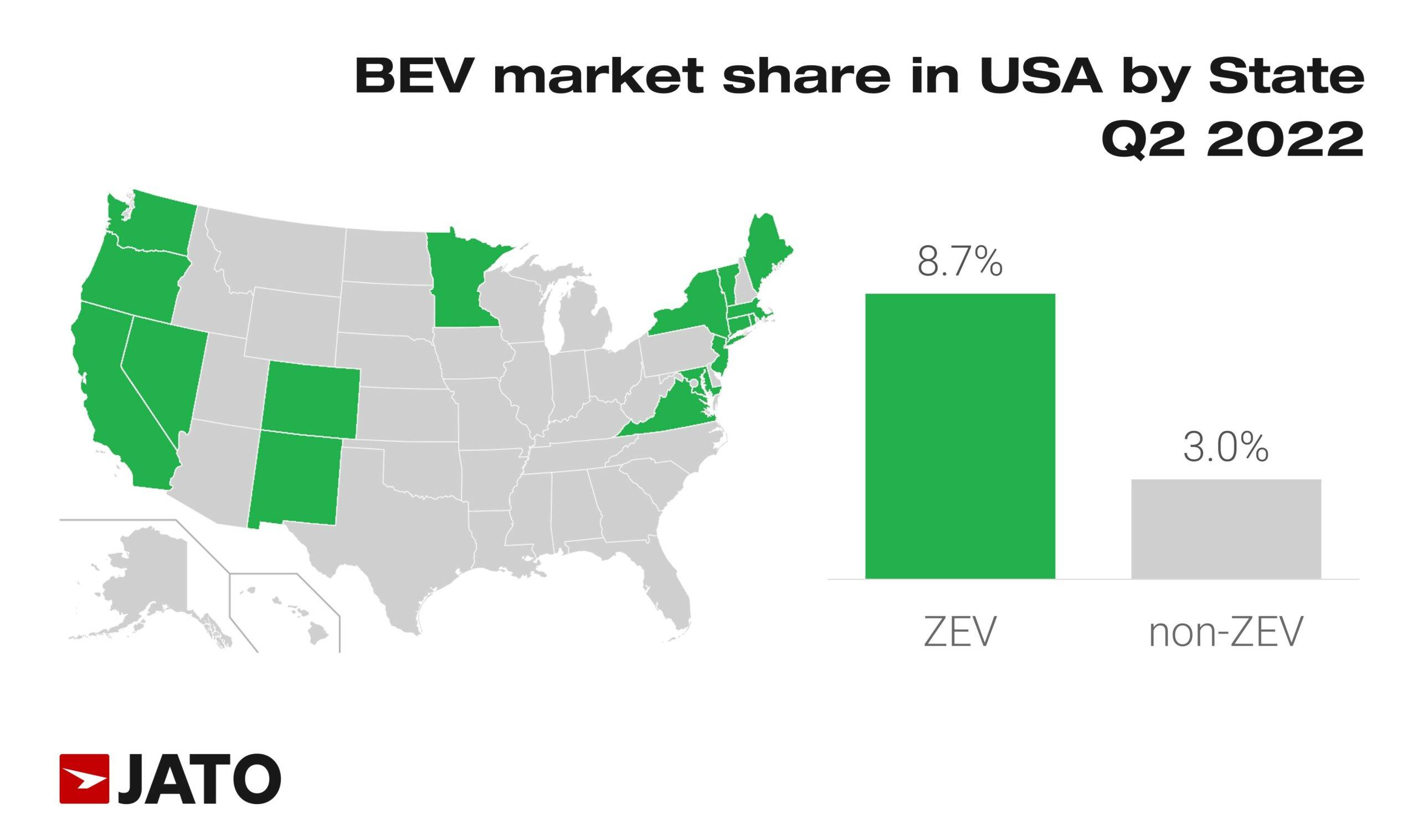 As a result, EV adoption in these states is significantly higher than in the rest of the country. In Q2 2022, EV market share in the ZEV states reached 8.7%, compared to just 3.0% for non-ZEV states. EV sales across the 15 ZEV states, represented 62% of the county’s total, however they made up 36% of the overall light vehicle market.

Whilst there are notable differences in EV adoption rates between markets in Europe and the US, the gap between developed, developing, and poor nations is even more striking in comparison.

For instance, while the market share of Battery Electric Vehicles (BEV) surpassed 10% in China, Europe, and Korea in Q3 2022, it didn’t even reach 1% in regions such as Latin America and Russia. This disparity is the consequence of the income gap, which is reflected in the infrastructure, the competitiveness of the industry, and lower levels of consumer awareness.

Developing and poor nations now represent more than one fifth of global vehicle sales. To ensure that these markets are not excluded from the EV transition, OEMs and governments alike must take action to address the barriers to adoption.