According to data for 26 European markets, new car registrations slowed once again in August, with a decline of 18% to 713,714 units. This marks the lowest recorded volume in August since 2014. Last month’s decline did not however offset the growth registered during the second quarter of the year. Year-to-date volume remains higher than last year, with 8,095,419 registered units compared with 7,192,839 registered between January and August in 2020.

Felipe Munoz, Global Analyst at JATO Dynamics, commented: “The chip shortage has been a major setback for OEMs still grappling with the effects of the pandemic. Production issues and delays in the delivery of new cars have been damaging to sales, and the lack of availability at dealerships is forcing many consumers to either look for used cars or simply delay their purchase. In usual circumstances, consumers may expect to wait lots of months for a new Ferrari, but they are now experiencing the same delay for regular models.”

EVs remain the only drivers of growth

Despite these challenges, the performance of electric vehicles and plug-in hybrid cars continues to grow. A sharp uptick in demand last month saw these vehicles post their second highest ever monthly market share at 21%. The 151,737 units registered last month marks a year-on-year increase of 61% and takes total volume since January to 1.32 million units. Munoz continued: “Although deals and incentives have played a significant part in boosting demand, we have seen a fundamental shift in buying habits as more appealing models have entered the market and consumers have become aware of the benefits attached to EVs.”

In August, EVs and plug-in hybrids outsold their diesel counterparts. This time last year, the volume of EVs was 158,300 units less than diesel car registrations, however last month we saw these EVs outsell diesel vehicles by 10,100 units. Demand was particularly strong for the electric versions of the Fiat 500, Peugeot 208, Hyundai Kona, Opel Corsa and Kia Niro, in addition to the outstanding results of the Volkswagen ID.3 – Europe’s top-selling EV during the month. 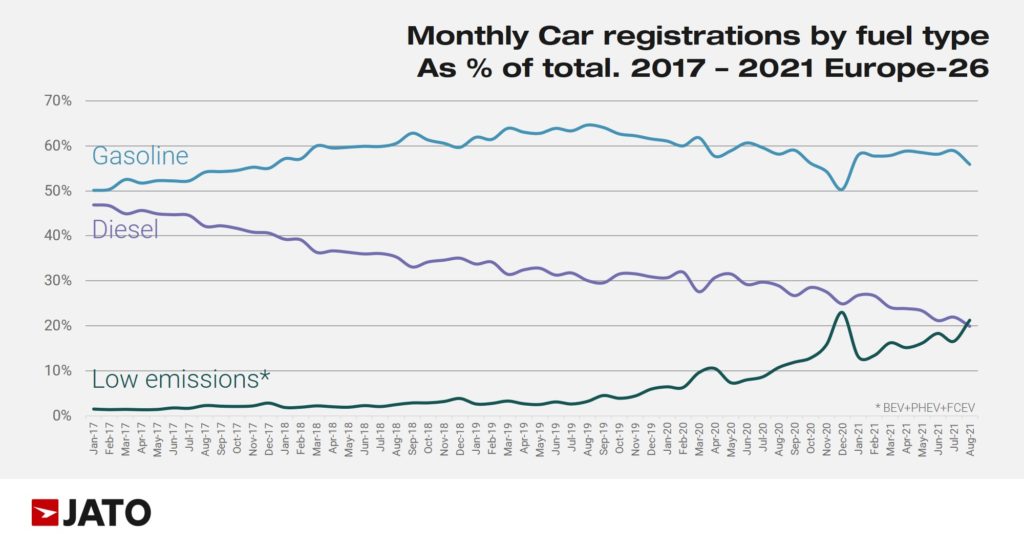 The Dacia Sandero leads once again

The Dacia Sandero secured the top spot in the general rankings as the most registered car in Europe. Despite availability issues, the third generation is proving to be a true success for Dacia. Deals introduced over the course of the year have helped this low-cost subcompact become Europe’s fifth best-selling car between January and August.

The Dacia outsold the Volkswagen Golf, in second position, which posted a year-on-year monthly decrease of 38%, but still leads the year-to-date rankings. Dacia’s Duster also entered the top 5 in fourth position, increasing its volume by 4%. Other notable achievements include the Fiat 500, which was boosted by the EV model, the Hyundai Tucson, and the BMW 3-Series which topped the premium rankings.

Among the latest launches, the much-anticipated Tesla Model Y entered the top 10 of the BEV rankings despite only hitting the market in August. Alongside this, the Ford Mustang Mach E also made the top ten; the Volkswagen ID.3 occupied the 15th position in the general rankings; Opel/Vauxhall registered 4,900 units of the new Mokka, and Volkswagen followed with 4,600 units of the ID.4. Citroen registered 4,600 units of the C4; the Cupra Formentor again performed well with more than 4,300 units, followed by the Renault Arkana which registered 4,341 units.

To see the full registrations table by make and model, please click below.