After a long period of uncertainty, there are positive signs for the automotive industry. During Q1 2021 alone, sales of pure electric passenger cars equated to the total sold throughout the whole of 2017. This BEV boom is helping many brands offset declines registered in the traditional combustion engine market, where the impact of the pandemic can still be seen.

According to our data, which includes 45 markets globally, the sales of EVs totalled 727,000 units – with the potential to amount to 750,000 units when including the remaining countries. Total volume also increased by 142% compared to the first three months of 2020, when the pandemic started to spread across markets.

Impressively, when compared to Q1 2019, the volume has more than doubled. 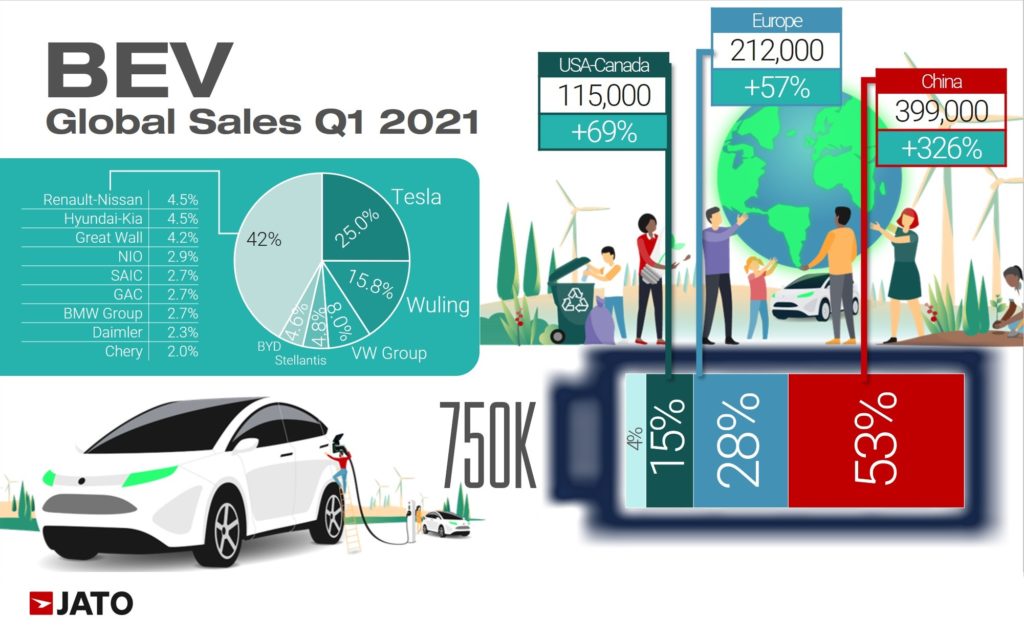 Europe and the US drive EV growth

Although the adoption of the electric cars is a trend witnessed across many countries, approximately 95% of the global volume is located in China, Europe and USA-Canada. Last year, these three regions accounted for 71% of all light vehicles sales (including all fuel types). It is clear that there is a big disparity and EVs have yet to make traction in the developing world.

China regained top position for EV sales, after losing it in Q1 2020 when the pandemic hit. Today, 53% of all electric passenger cars sold are in China. This dominant position is due to the implementation of strong incentives packages by the central and regional governments. This can also explain the acceleration seen in the development and launches of more competitive cars offered by younger players such as NIO, Xpeng, Voyah, and Byton.

Despite China’s strong position, a big revolution is taking place in Europe. With almost 200,000 units registered from January – March 2021, Europe has become a major player contributing to the rapid development of EVs. Unlike Japan and the USA – deciding to focus on hybrids and big trucks / SUVs respectively – Europe decided to compete against China. With their decisions strongly supported by local governments, granting large incentives packages to boost demand.

EVs and SUVs have been the only sources of growth during the pandemic. In Q1 2021, pure electric cars accounted for 6.4% of total market, a new record. Contrary to what happened in 2019 and 2020, the growth is now driven by local OEMs, introducing more cars at competitive prices. Europe is no longer relying on a couple of strong models to drive growth, namely the Tesla Model 3 and Renault Zoe.

In the US, consumers demand big trucks and SUVs, which makes shifting to electric cars difficult. Despite this, Tesla – an American brand – is the world’s largest EV seller, thanks in part to domestic demand. Its outstanding results have encouraged peers to join the EV race, with Ford launching the Mach-E and the upcoming F-150 Lightning, and GM working on the Hummer’s electrified line-up.

Tesla dominates sales with 1 in 4 BEVs

Elon Musk’s decision to adopt EV technology is paying off. Tesla continue to increase their sales globally, with one in four electric passenger cars sold in Q1, a Tesla. However, its market share has decreased when compared to previous periods, due to there being greater competition in the industry.

Still, it is a remarkable achievement for a relatively new brand that only has 4 models available – two of which are more than 6 years old. Its growth is boosted by the Model 3 globally, and the Model Y in North America. They were the first and third best-selling EVs in Q1 2021.

EV leadership is expected to continue as large and traditional OEMs continue to launch new electric cars. Volkswagen Group, which has now 11 different models available (as of June 2021), are helping to offset losses posted by its traditional ICE cars, such as the Golf, Jetta, Passat and Polo. The ID line from Volkswagen is already performing well in Europe, with the ID.4 leading the BEV European ranking in April. 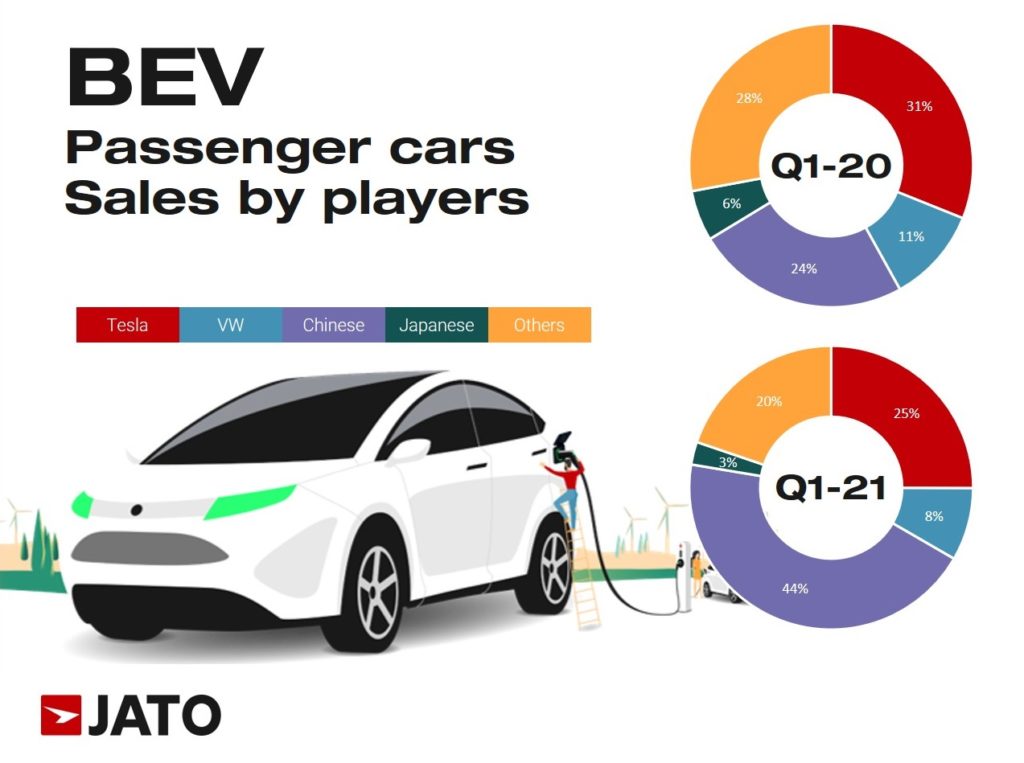 General Motors is also growing at pace thanks to its joint ventures in China. Baojun and Wuling brands are seeing high demand for their EVs, due to their low prices and attractive packages. The Wuling Hongguang Mini is already the country’s top-selling BEV, ahead of the Model 3.

We are still far from taking off

The good news must not be misinterpreted. Electric cars are not fully adopted across the industry, and they won’t be until their prices fall to levels that consumers can afford.

If the industry doesn’t act quickly, there is a risk of not accessing a large customer base, which has the potential to negatively impact factory occupation and employment levels. The role of governments will be key to this adoption – helping by increasing incentives or reducing taxes on these cars.

Legislation is forcing governments to secure their plans to reduce carbon emissions. Building your strategy in line with government and market expectations is the challenge facing the automotive industry today. We tell you how in our latest viewpoint piece on what’s helping to drive the xEV market: https://www.jato.com/xev/