How American and German car makers make use of trade?

Germany and the US are two of the most powerful countries in the car industry. The relationship between these two nations is complex and needs to be carefully analysed to fully understand how the relationship is evolving. 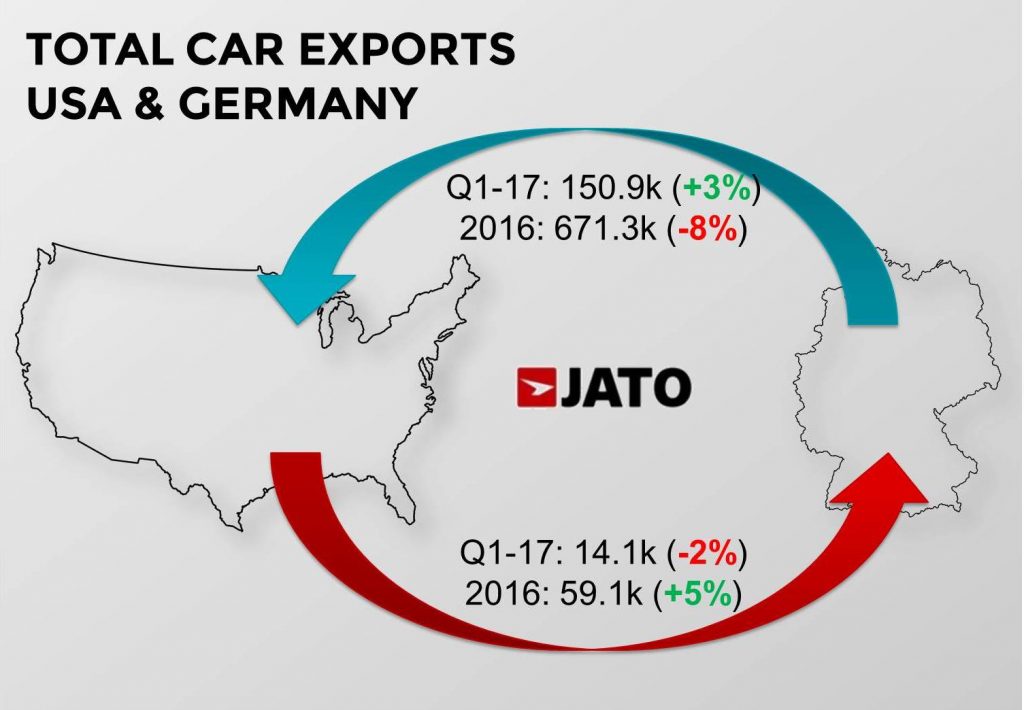 In the first quarter of this year, German-made cars accounted for 3.74% of total car sales in the USA. Their volume grew by 3.3% to 150,900 units, while the whole market posted a 1.6% drop during the same period. German cars were the most popular European cars in the USA, ahead of the UK with only 45,100 units and Italy with 32,700. However, German vehicles did lag behind their Canadian, Japanese and Mexican counterparts. US consumers continue to buy NAFTA made cars, which accounted for 79% of the total for the quarter.

German manufacturers are selling more cars (in terms of volume), but in reality their sales are not growing as fast as the average market. Part of the reason is the increasing localisation of production led by BMW, Mercedes and Volkswagen during the last few years. Sales of German cars made in the USA jumped from 75,700 units in 2009 to a record of 289,500 in 2015. Last year their sales totalled 287,700 cars. These numbers exclude exports, which are mainly to Europe and NAFTA countries, this shows how well they’ve been received by the American consumer. 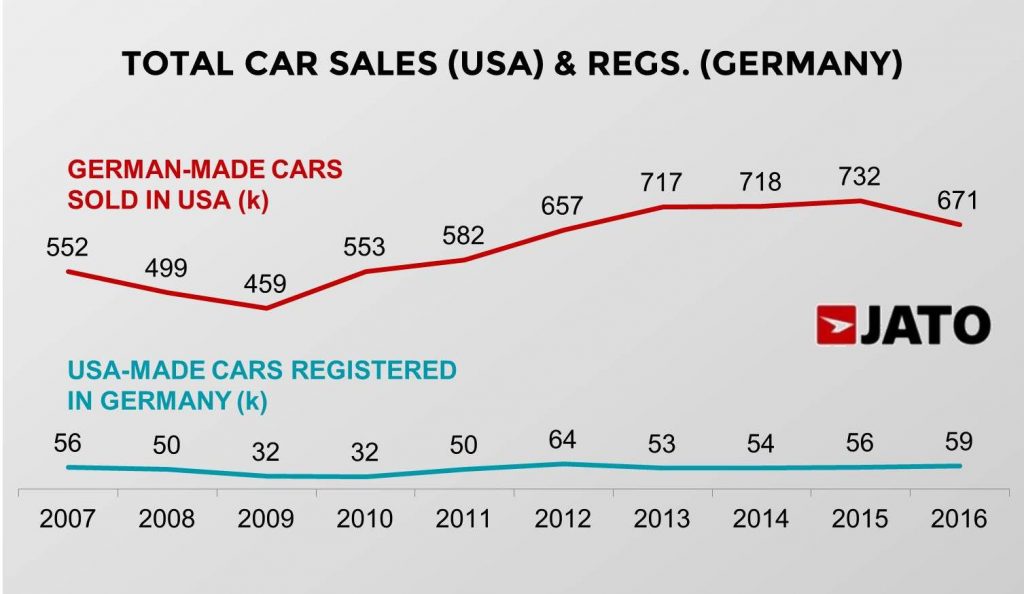 Quality manufacturing and the SUV segment explain the rise of German cars in the USA, and as it is a global trend, the SUV boom has benefitted the increased production of cars like the BMW X3, X4, X5 and X6, and the big Mercedes SUVs. This means that the USA has become an important SUV hub, attracting foreign investment to satisfy not only local demand but also global markets. 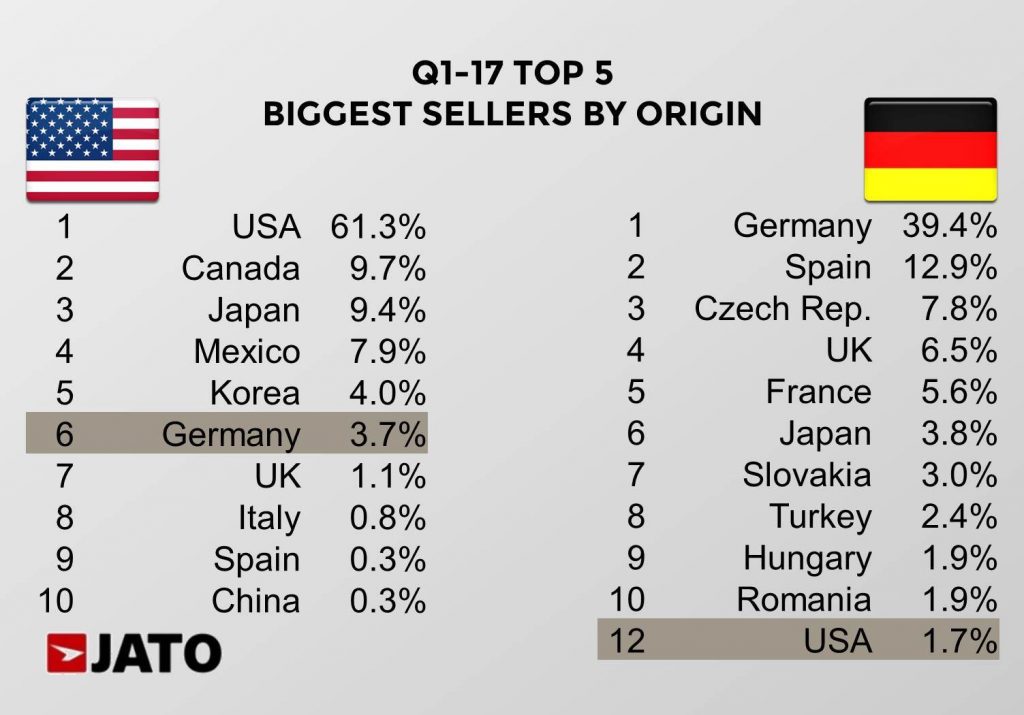 In contrast, American car makers chose another path to conquer German consumers. Instead of making the cars in the USA and exporting them to Europe/Germany, they opted for building most of their European range in Europe. When it comes to cars, European and American tastes can differ greatly. The small and compact cars that consumers buy in Germany account for 42% of the total market, while they only accounted for 17% of US totals. This is not the case for SUVs, which are popular everywhere, with 24% share in Germany and 40% in the USA. Therefore, building small cars in the USA for export reasons may not be the most profitable way forward. 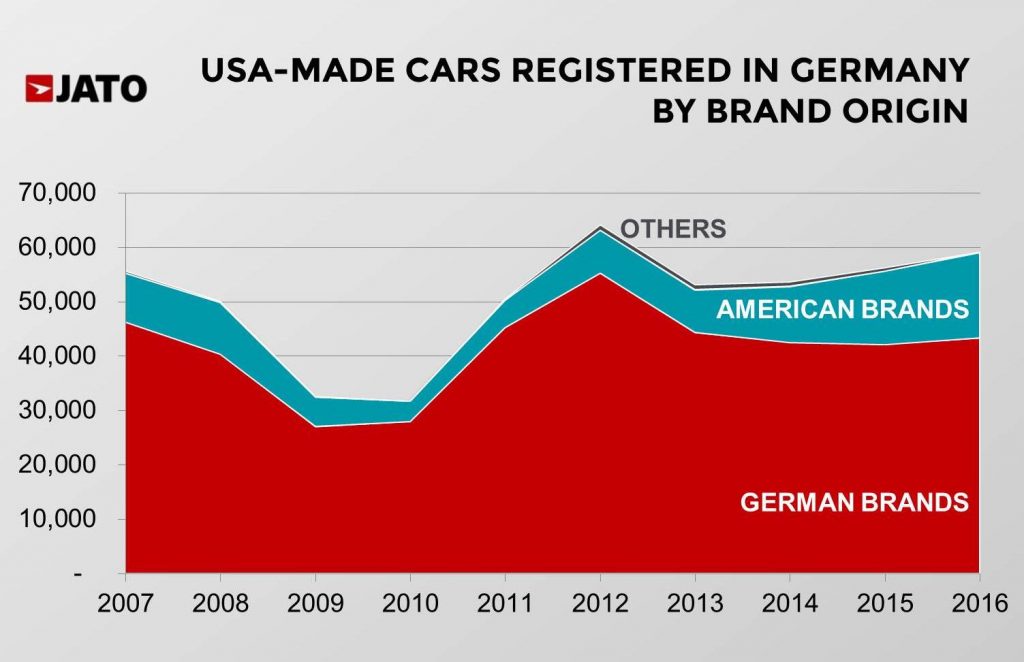 As they only rely on one particular segment (SUVs), American-made cars in Germany have struggled to increase their share. Only 1.2% of the total sold by Ford and GM in Germany in Q1-17 corresponded to US-made cars. When looking at the total imported cars coming from the US, it is interesting to see that most of them have the BMW or Mercedes logos: 69% of the American-made cars sold in Germany in Q1-17 were BMW and Mercedes. In reality the biggest exporters to Germany are German manufacturers based in the US. American brands (including Jeep) were responsible for 30% of imports coming from the USA. 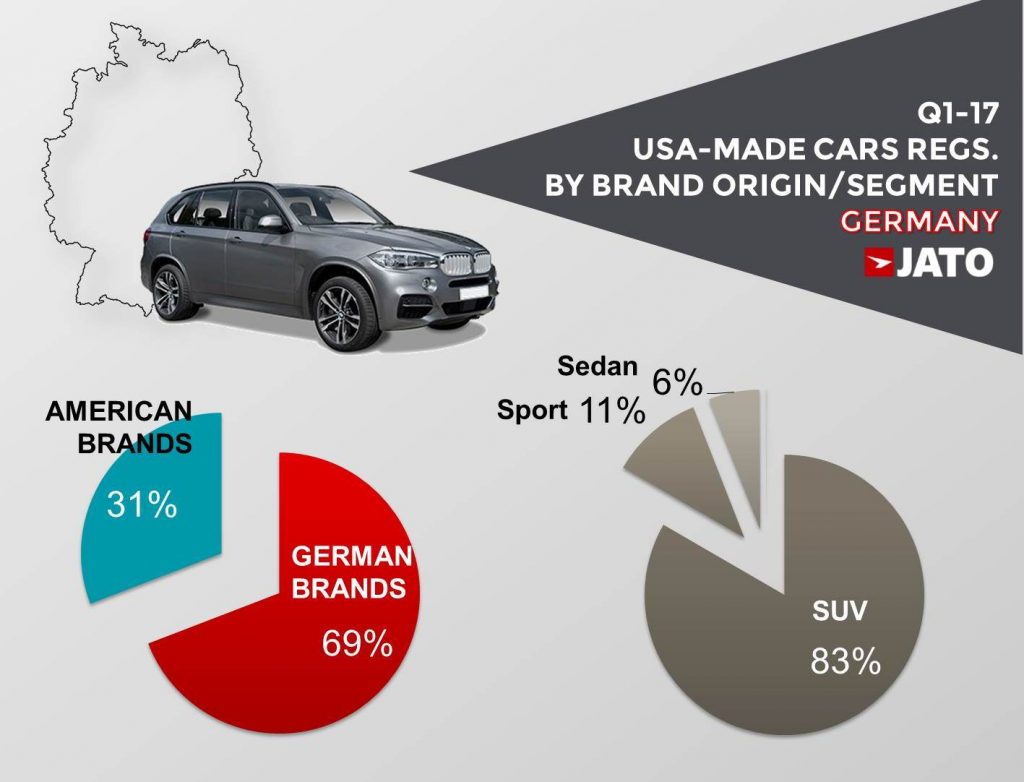 The market share of US-made cars in Germany jumped from 0.85% in 2009 to 2.08% in 2012 and then fell to 1.76% in 2016. This is definitely lower than the market share posted by German-made cars in the USA. However, the very few cars exported to Germany are coming from German-owned factories in the USA, which tells us a lot about how the current trade conditions are being used by both parts. While the Germans make use of the SUV boom on both sides of the Atlantic ocean, it is not profitable for American car makers to build small cars in the USA. There is certainly a deficit but this is complex and is due to how each country approaches its automotive industry, it is not as simple as it first seems.

Our market-leading data and insights is made possible due to our dedicated research team and automotive experts, wh… https://t.co/MS2FVCDhrg