Despite signs of recovery, the industry is still facing several challenges, including the economic fallout of the pandemic, ongoing lockdown restrictions and lack of consumer confidence. Registrations fell by 22% last month when compared with March 2019 – marking the lowest total volume of new cars registered since March 2013, when volume totaled just 1,337,588 units as a result of global financial crisis. Felipe Munoz, global analyst at JATO Dynamics commented: “The European car market is still a way off from reaching pre-pandemic volumes, and governments must take further action to help boost sales and restore consumer confidence.”

EVs and SUVs continued to be the main drivers of growth for the market. EVs posted a record market share of 16% in March 2021, compared to 9.7% in March 2020, and just 3.4% in March 2019. Munoz added: “Consumers are reacting positively to more extensive and competitive EV offerings. However, as these vehicles are often more expensive than ICE models, the positive impact has not yet offset the big drops seen across traditional high-emissions fuel types.” 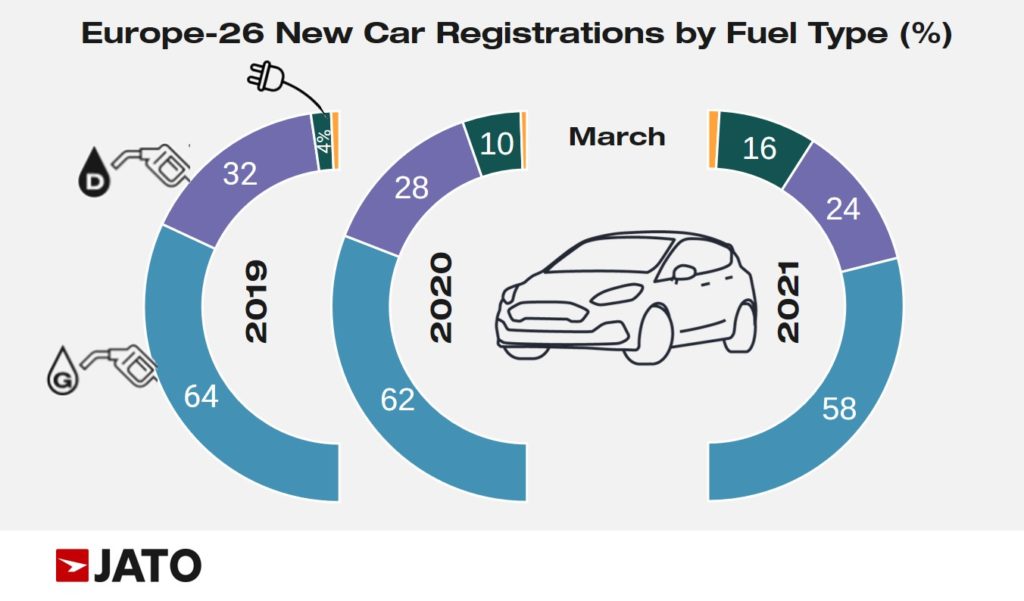 The market share of SUVs has also continued to grow year-on-year, from 37% in March 2019, to 40% in March 2020, and 45% in March 2021 – with notable traction in Sweden, Norway, Slovenia and Hungary, where they gained more than 10 points of share between March 2020 and 2021. Munoz continued: “The success of EVs and SUVs stand as a good indicator that consumer demand will soon be focused towards upcoming electric SUV models, which will be a key driver of growth for the industry moving forward.”

In March 2021, diesel cars recorded their lowest market share to date at just 24%. With the European Commission continuing to introduce tougher CO2 regulations, the shift away from diesel and other high-emissions fuel types is likely to continue. 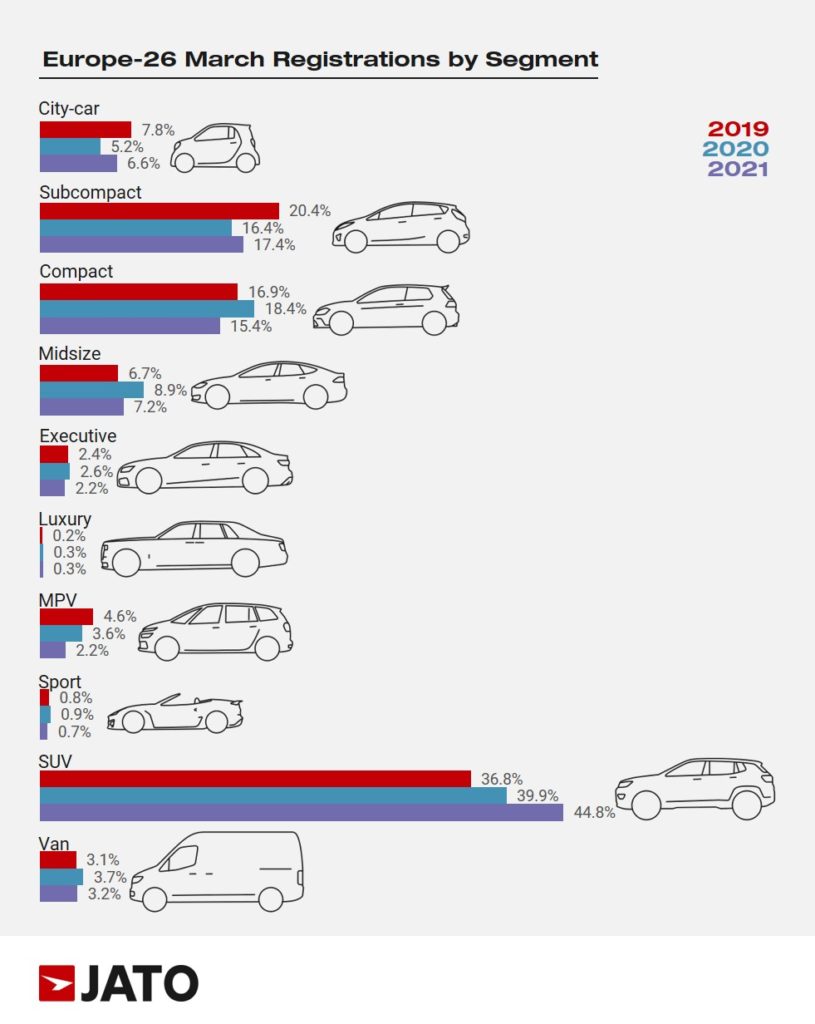 In the European model rankings, the Volkswagen Golf reclaimed its position as the most registered car in Europe with 26,265 units, up by 12% in March 2021. The electrified versions (PHEV and MHEV) of the Volkswagen Golf contributed to this growth, especially in Germany, where they accounted for  36% of the model’s volume. The Golf outsold the Peugeot 208 by 836 units, which was the top-seller in Q1, with almost 61,000 units in total. The Opel/Vauxhall Corsa also performed well, comfortably outselling the Renault Clio and Volkswagen Polo.

The Tesla Model 3 was fourth in the model rankings last month, and confirmed its position as the top selling model in the European BEV rankings in both March and Q1. The Model 3 also topped the BEV rankings in the UK, France, Norway, Italy, Austria, Sweden, Switzerland, Netherlands, Denmark, Portugal, Poland, Greece, Slovenia, Croatia and Germany, ahead of the Volkswagen ID.3. Another non-European model which posted strong results was the Hyundai Kona, as the second most registered BEV in March 2021.