Across 26 European markets, new vehicle registrations continued to fall in July. The decline, however, was significantly less than the drop seen in March, April, May, and June. Volume totaled 866,038 units – down by 10% compared with the 966,453 units registered in the same month last year. Year-to-date, the market decreased by 13% relative to the same period last year, with a total of 6,398,609 units.

Registrations through July were at similar level to those seen between January and July 2020, when hit pandemic hit the market. Felipe Munoz, Global Analyst at JATO Dynamics, commented: “The impact of the chip shortage and current lack of consumer confidence is proving to be just as damaging to the market as the arrival of Covid-19.”

Within this context, interesting trends have emerged. While electrified models continue to gain traction, growth has slowed when compared with previous months. In July, these vehicles totaled 157,614 units – down by 2% due to falling demand for plug-in hybrid electric vehicles (PHEV). According to JATO Dynamics data, PHEVs posted a 22% decline during July, in response to recent announcements that these vehicles will no longer qualify for incentives in several European markets. Munoz continued: “PHEVs are losing regulatory favour and this is already impacting their position within the market. While governments are trying to steer the industry towards pure electric vehicles (BEV), hybrids still have an important role to play if we are to see widespread uptake of low emissions vehicles across Europe.”

In contrast, the volume of BEVs increased by 20% to 90,139 units in July, due to the growing deals and models available. In Germany – the largest market for BEVs – demand increased by 13%, and by 69% in France, the second largest market. These cars accounted for 14% of total registrations in Germany, 12% in France, 11% in the UK, and 3% in both Spain and Italy.

The segment was led by Volkswagen Group, which accounted for almost 29% of total registrations with a volume increase of 17%. This is however notably lower than the gains posted by the segment’s second largest player, Stellantis (+41%), and Renault Group – up 66% in third position. Munoz commented: “The German manufacturer is struggling to deliver its electric cars. While the ID.4 seems to be holding ground, the ID.3 is failing to deliver the same results.” 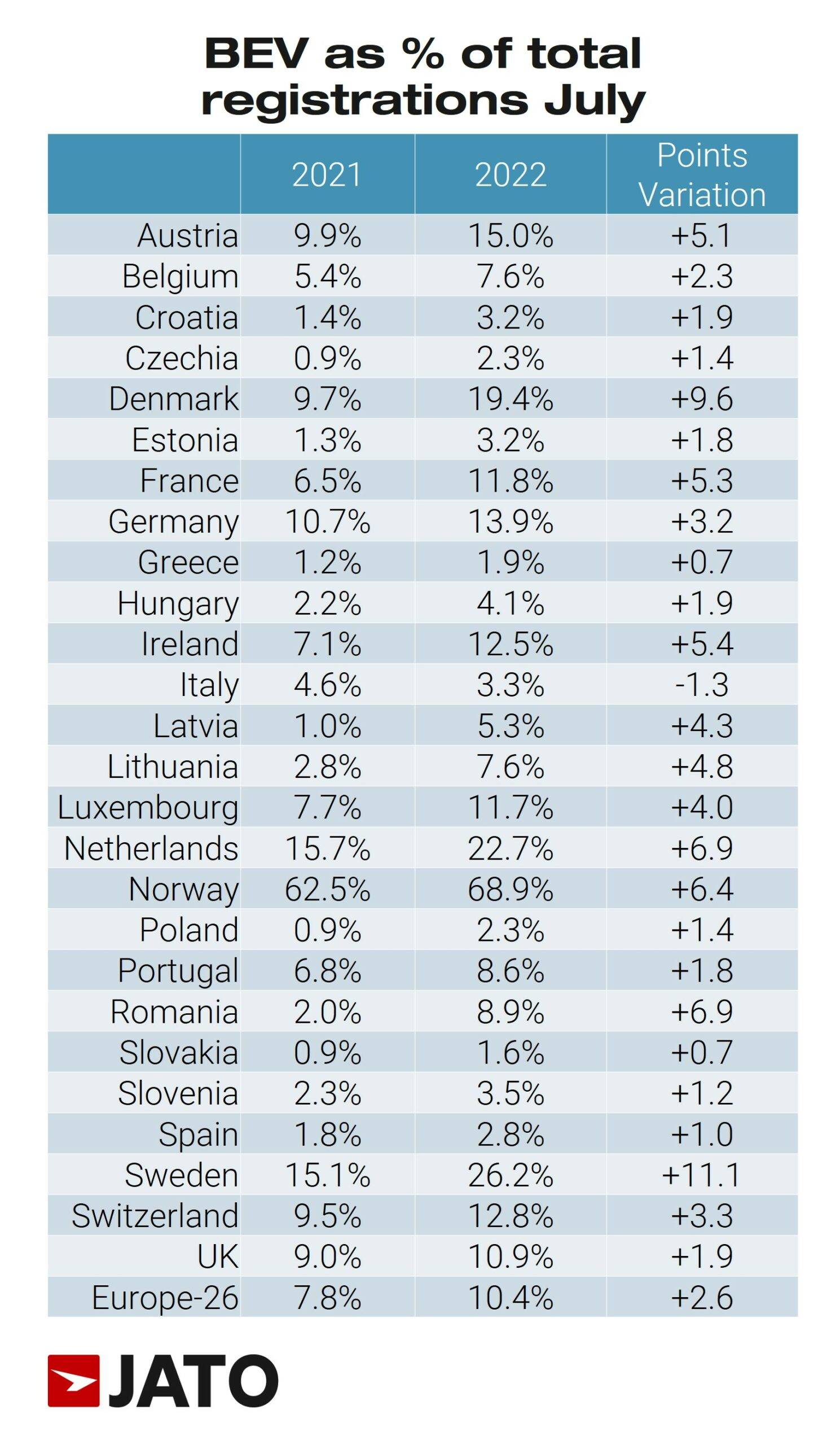 China’s OEMs (including MG, excluding Geely Group) posted a 72% increase, with 3,501 electric cars registered during the month. MG led with almost 3,000 units, up by 56%, followed by BYD with 238 units. Munoz added: “China’s manufacturers are slowly climbing the rankings, becoming a credible alternative for those looking for an affordable and appealing electric car”. Almost half of the Chinese electric cars sold in July were registered in Sweden and Norway.

The T-Roc leads for the first time

In the overall ranking by model, Volkswagen’s small SUV, the T-Roc, took pole position for the first time – the second time since October 2021 that an SUV has led the market. Volkswagen increased registrations of the T-Roc by 15% due to strong demand in Italy (+73%) and the UK (+87%), its second and third largest markets.

Among the top 10, the Peugeot 208 performed well – up by 51%, following a 96% increase in Italy, its second largest market. Fiat saw good results from the electrified version of the Fiat 500 with registrations up by 37% to 5,000 units, making it the best-selling pure electric car during the month. Kia entered the top 10 thanks to the latest version of the Sportage, seeing increased demand in Germany (+108%) and France (+122%).

You can see the full rankings by OEM, brand, model and segments by submitting the form below: