The first conclusion of the Q1 financial results indicate that carmakers around the world have recorded the same amount of revenue, but made less profit so far in 2019. The figures confirm that it was not an easy quarter for most automakers, as many of them were exposed to the trade tensions between the USA and China, and the more challenging conditions in Europe. The published companies figures show that the net margin was severely affected by this more complex scenario.

Our study includes the official data released by 28 different automakers and excludes Chinese manufacturers that operate joint ventures with foreign companies. This exclusion is due to the fact that these companies combine the JV and their own operations within their financial statements. These companies are: Dongfeng Motors, BYD, SAIC, BAIC, GAC, Chang’An, Zotye, JAC and Chery.

However, we are including JAC Motors, Foton Motors and Great Wall Motors. Geely was excluded because it is not releasing its Q1 results until August.

The 28 companies included in this study recorded revenues of €448.6 billion during the first three months of this year. The total was 0.1% higher than in Q1 2018, using the same exchange rates for both periods. It means that the industry sold €7.01 billion per working day, or €876 million per working hour. It was an increase on Q1 2018, where revenue equated to €6.90 billion per day.

Although revenue remained stable during the quarter, fewer vehicles were sold than during the same period in 2018. In total the 28 automakers sold 20.23 million vehicles (made up of passenger cars, light commercial vehicles and heavy trucks). This was 861,000 less than in Q1 2018 – a 4.1% decrease. The difference between the revenue made and the amount of vehicles sold means that despite the challenges, the automakers were able to increase the average prices of their vehicles.

According to the previous figures, the average price per unit sold increased from €21,245 in Q1 2018 to €22,168 during the first three months of 2019. The increasing revenue/price per unit is mostly explained by more SUVs everywhere and somehow offset by Brazil, India and some South Asian markets, where most of the demand comes from smaller and cheaper vehicles.

There are many factors that can explain why automakers are making less profit this year. The most important is the deceleration in the Chinese market, where sales were down by 11%. It had been the top driver of growth during the last 15 years, however vehicle demand has suddenly started to decrease as a consequence of higher household debt and trade tensions with the USA. Meanwhile, growth has also cooled down in the USA and Europe, leaving very few markets for carmakers to grow and make money. 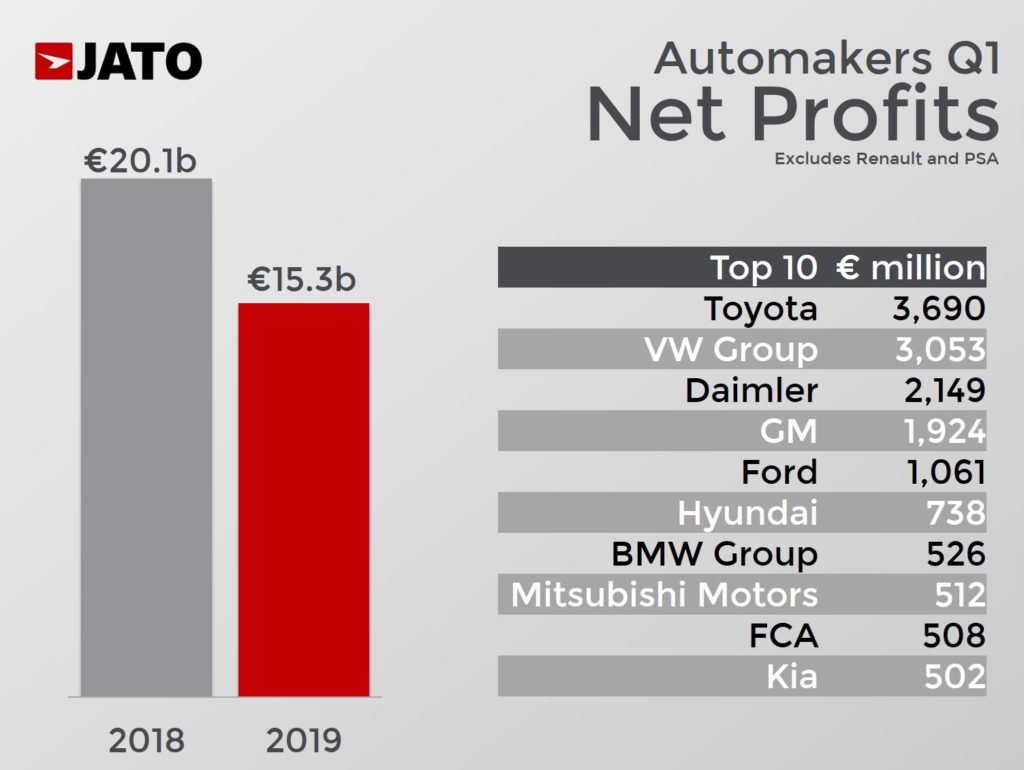 In Q1 2019, the net profit of the 26 companies (excluding Renault Groupe and PSA as neither release profit information by quarter) totaled €15.27 billion. Unlike revenue and sales volume, profits fell by 24% due to losses from key players like Honda, Suzuki and Tesla, and big drops in profits posted by Nissan, BMW Group, Subaru, JLR and FCA.

As a consequence, the net margin was severely affected during this period. It fell from 4.8% in Q1 2018 to 3.7% this past quarter. This means that the already small margin is getting even smaller. And conditions look set to worsen, with the upcoming CO2 targets in Europe and potential geopolitical tensions in Iran, North Korea and Venezuela.

The European new car market showed both worrying and interesting trends during the first half of this year. These a… https://t.co/YT3L97PlWV