Chinese manufacturers account for almost half of global EV sales

The race to electrification continues to power ahead. While Tesla is perhaps the hottest topic of the moment, interestingly there appears to be very little news about the actions that Chinese brands are taking in the space. Despite the fact that Chinese ICE vehicles may not currently be game changers within the industry, the country certainly plays a key role in the EV market.

According to data from JATO Dynamics, the global sales of pure electric passenger cars totaled 2.97 million units between January and September 2021. The total being 149% higher than the volume recorded over the same period last year.

The strong acceleration is remarkable when considering the timid growth of the overall market, at just +11%. The BEV market share jumped from 2.6% in 2020, to 5.8% through September – marking a significant increase.

Within this context, it is interesting to see the dominance of China as a market for BEVs and their respective brands. According to our data, Chinese car brands account for 45% of global sales, in contrast to the 15% market share they hold across the entire passenger car market (when including all fuel types). Demonstrating clearly that EVs boost the market share for China’s cars by 30 percentage points.

However, it’s important to consider that a large part of the success achieved by Chinese BEVs is due to domestic demand. Around 95% of the volume sold by these brands remained in China, with a particularly small amount of global penetration. Nonetheless, the strong sales are a clear indicator of what could be on the horizon if governments around the world continue to push the shift from ICE to BEVs.

From China to the rest of the world

China’s dominance does not solely relate to sales. The figures show that six in 10 BEVs sold globally through September were made in China. Despite controlling 45% of the global sales, they also account for 60% of the production, meaning that foreign car manufacturers are already producing BEVs in China.

Tesla, Volvo, Polestar and BMW are among them. In fact, almost half of Tesla’s global sales in Jan-Sep 2021 were from cars made by its Gigafactory in Shanghai – to date, most of the Tesla Model Y registrations in Europe have come from that plant.

The electrification of the industry represents a prime opportunity for Chinese car manufacturers to enter the global arena at last. Unlike the ICE world – where China is still far behind its Western peers – there have been no head starts in the EV market, meaning Chinese operators currently have two important advantages: 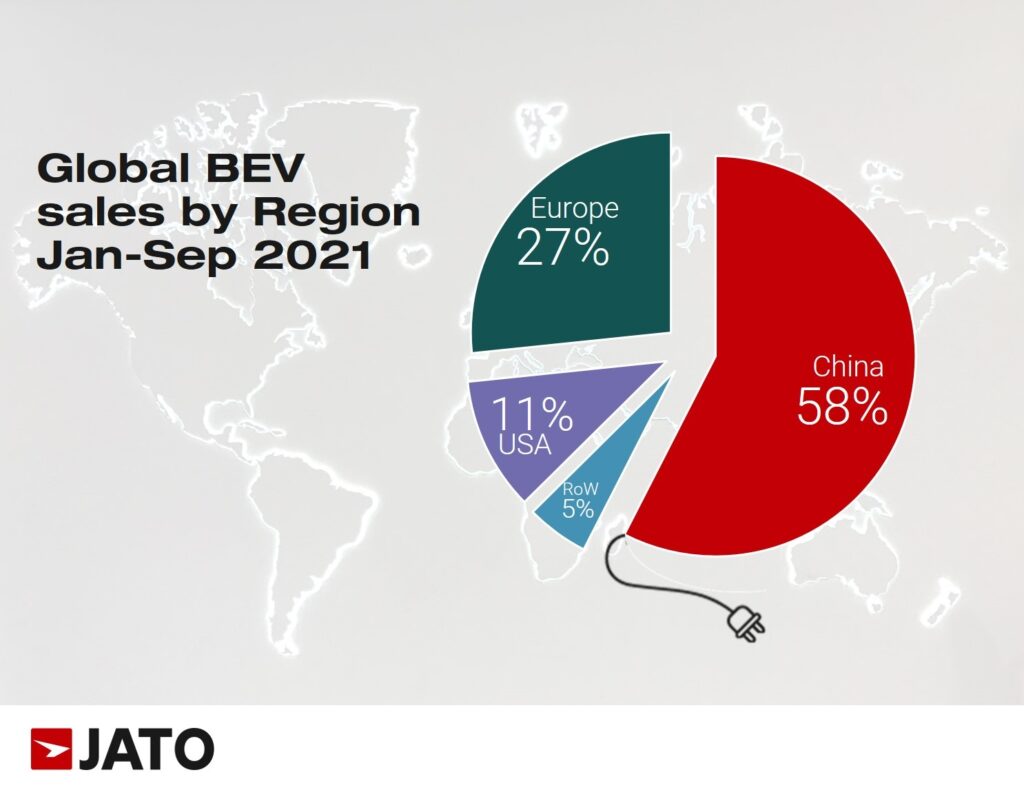 Tesla is still ahead, but a Chinese manufacturer follows

China’s new position is also evident in the ranking by OEMs. Tesla continues to lead with 23% market share in the global BEV market. However, they are followed by the joint venture formed between SAIC, General Motors and Wuling, which gained traction thanks to the microcar Wuling Hongguang Mini EV – which today is China’s top-selling BEV.