Europe H1 2017: diesel car registrations at their lowest share since 2009

The diesel car market in Europe is not having a good time. During the first six months of this year, European registrations of diesel vehicles fell by 4.3% to 3.8 million units. With 45.3% market share, the diesel fuel segment also suffered its lowest share since H1 2009, when it was 44.4%. This result was also 4.1 percentage points below the market share seen in H1 2016, and 9.2 points less than the market share which diesel had in H1 2011. Even if diesel has become a hot topic since the dieselgate scandal in September 2015, the truth is that the shift from diesel to gasoline and Alternative-Fuelled-Vehicles (AFV) has been happening since 2012. Diesel cars now lack the appeal they once held in terms of fuel consumption, emissions and incentives. Today, gasoline cars are as efficient as diesels, whilst electric and hybrid vehicles have been strongly boosted by government and car maker initiatives. In stark contrast, diesels are set to be banned in some European countries. 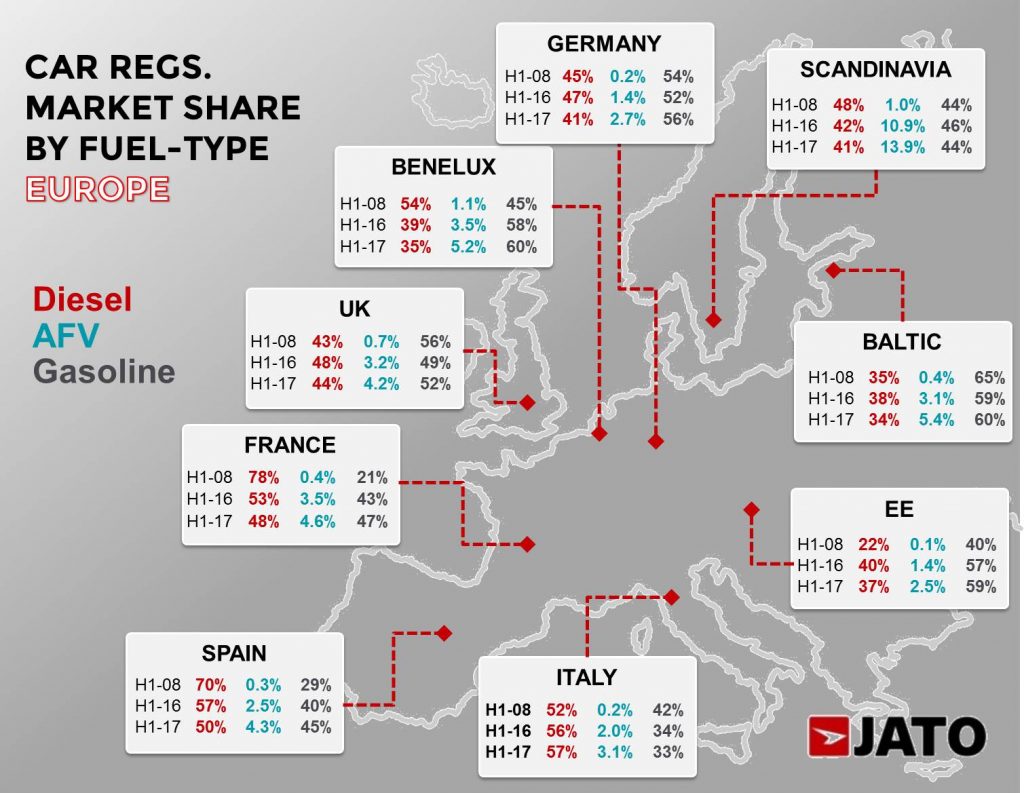 With this in mind, it is not surprising to see the difficult situation the diesel fuel-type is facing right now. Demand for gasoline cars has grown more rapidly and for the first time in nine years, they outsold diesels during the first half of 2017. Gasoline cars have become more efficient, less pollutant and the number one choice when it comes to small and compact cars, which accounted for almost half of the European car market in H1 2017. 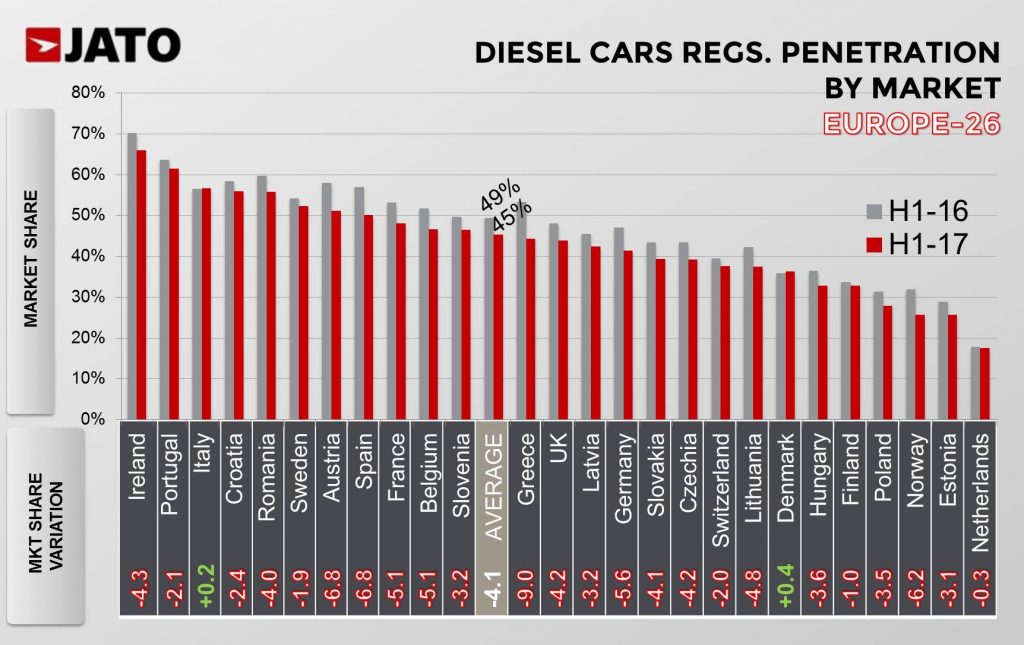 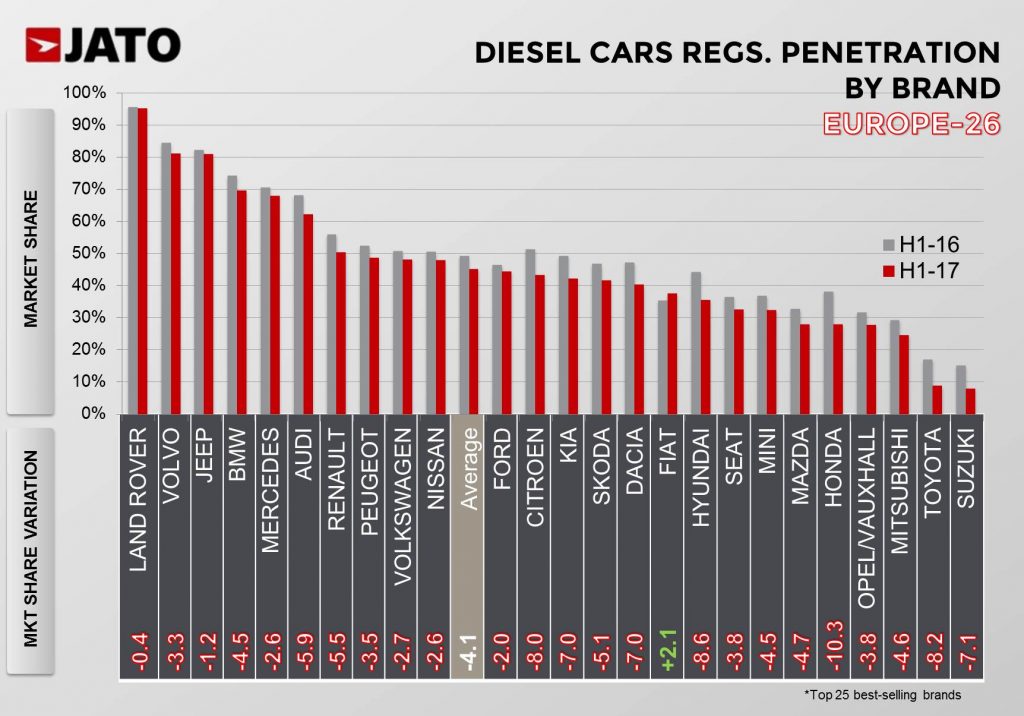 The diesel fuel-type does have one strength to hold on to though. SUVs, Europe’s main (only) driver of growth when it comes to registrations, are still mostly dominated by diesel. In fact, the diesel numbers would be significantly worse if SUVs were out of the equation. The diesel fuel-type accounted for 58% of total SUV registrations, surpassing the market share of this fuel-type in other key segments like the compact (48%), MPVs (53%) and even luxury sedans (57%). Therefore, diesel is still an important fuel-type in Europe due to the popularity of SUVs. 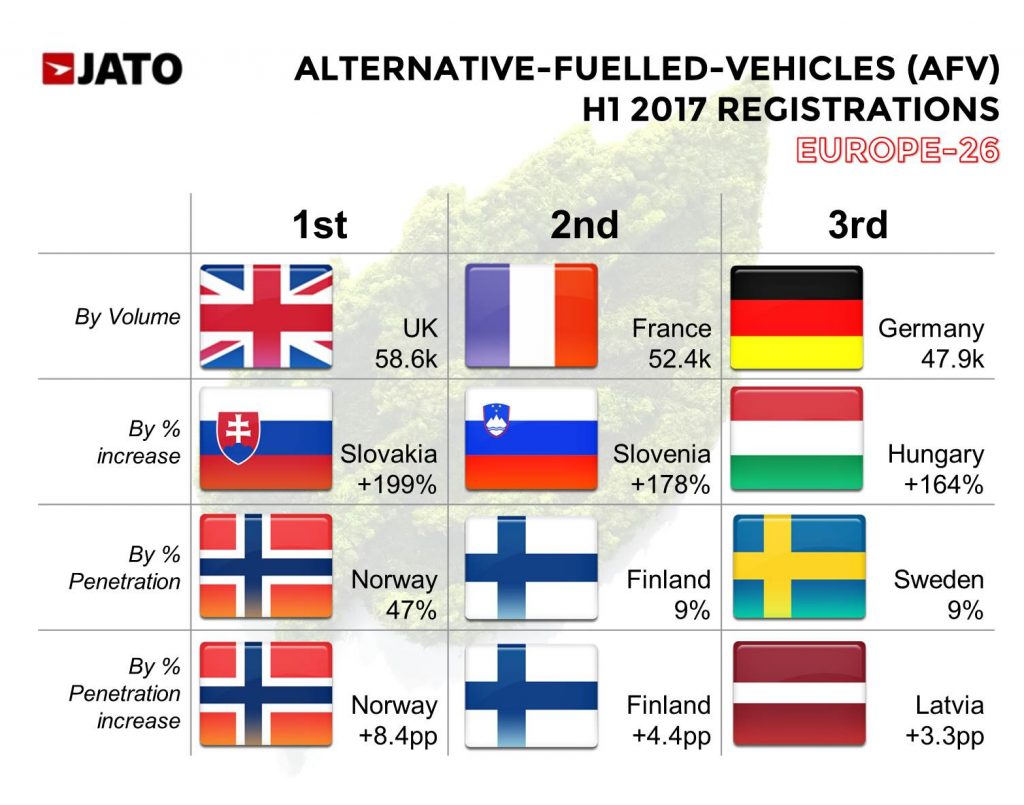 Simultaniously, AFVs continue to shine. They may still be a rare sight on the road, but they are rapidly gaining popularity thanks not only to public incentives, but better batteries, lower prices and a wider range of vehicle choices. In H1 2008 the AFV registrations accounted for 0.4% of the total market. Ten years later, their volume represents 4.2% of the total market. Toyota’s hybrids are behind this impressive growth, as their registrations accounted for 55% of all AFV registrations through June 2017. 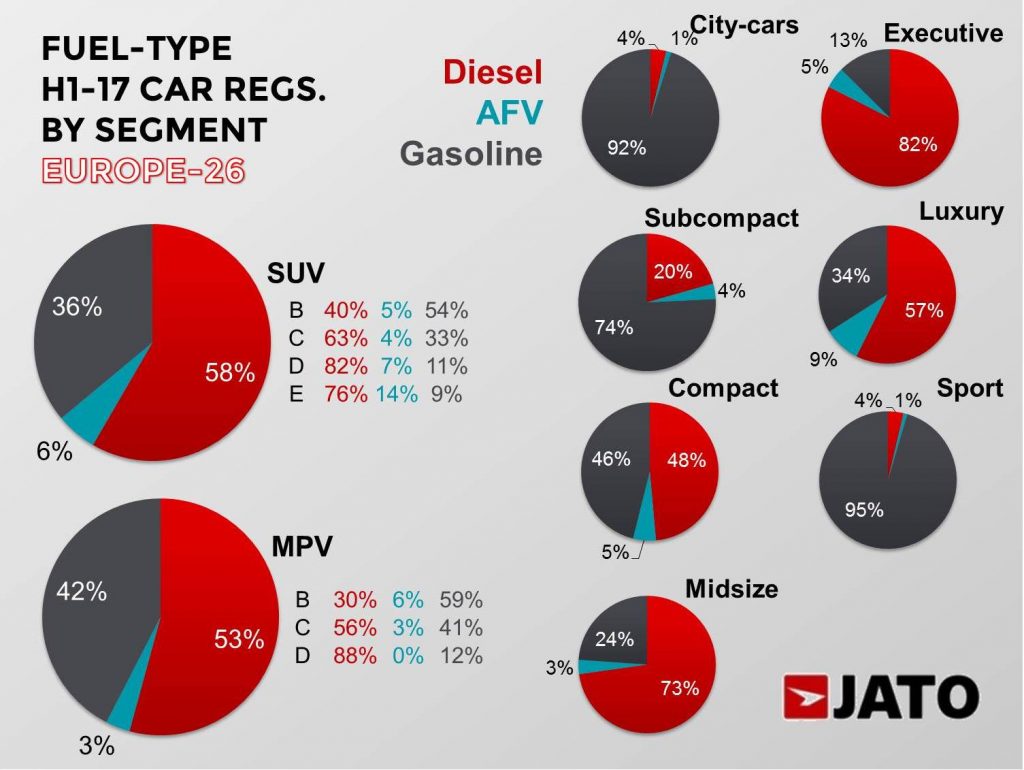 The diesel’s decline is a major issue for big car makers. With the exception of FCA, Daimler and Volvo, all of the top-selling makers posted declines in H1 2017. Volkswagen Group’s diesel cars accounted for almost 25% of the market, yet registered a 6.4% decrease in volume. This was followed by Renault-Nissan, Peugeot, and BMW Group which all recorded declines of 4.6%, 8.5% and 5.0% respectively. Interestingly, the strong results of the Fiat Tipo have allowed FCA to increase its diesel car registrations by 14.2%. 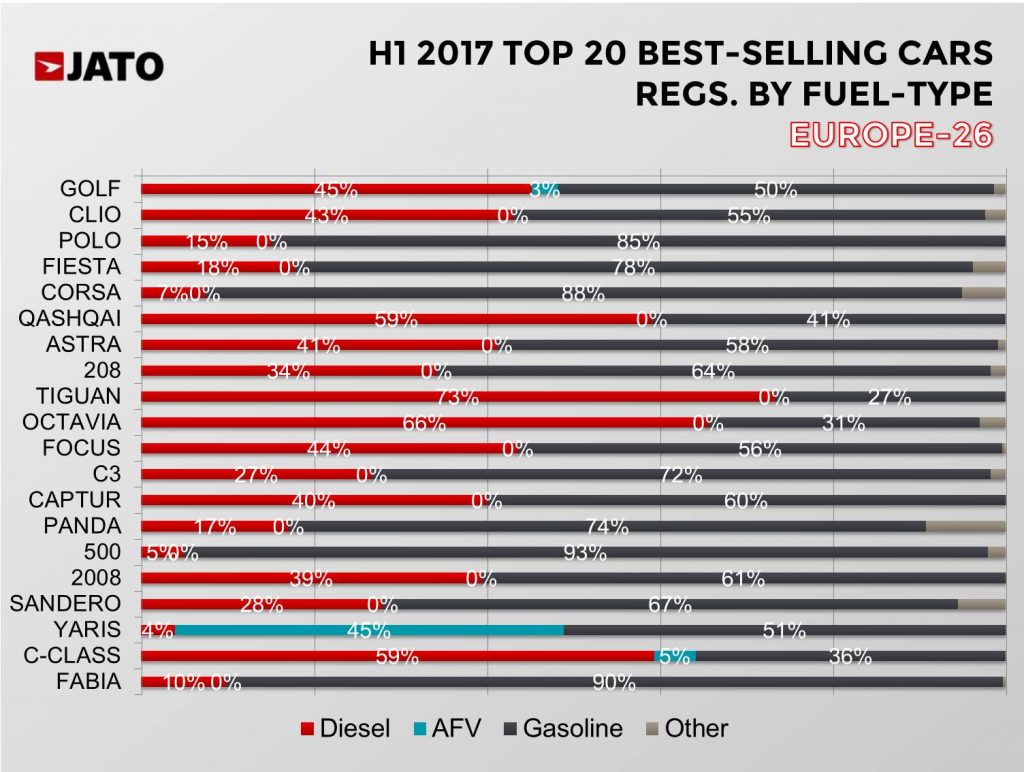 What’s next then for diesel? The outlook doesn’t look positive, in the next three years, Europe will continue to buy more hybrids and electrics up to the point where their volume could account for around 10% of the market. Meanwhile, the diesel fuel-type’s share is expected to fall below 35%, leaving gasoline cars with a stable market share. The arrival of new hybrid and electric SUVs will undoubtedly accelerate this trend, too. At the same time, the premium brands, whose sales are strongly dependent on diesels, should be able to adopt the electric technology with limited impact to their sales, as many of their customers are early adopters looking to embrace the AFV option.